The Lord of the Jungle

This'll be a one-figure post tonight.  I don't think I've ever done that before; all my other "showcase" posts have been displaying at least several models.  Still, you'll just have to put up with this for now...

So here he is: Tarzan, the jungle lord.  He's a 28mm figure from Reaper.  The description in the Reaper catalogue suggests that he comes with a chimpanzee, though I don't remember getting an ape with this model.  Mind you, it was a long time ago and I may just have mislaid the sidekick...

Since Tarzan has little clothing, no warpaint and few artefacts, he's very straightforward to paint.  Just a basecoat of flesh with a wash over it, then a little detailing.  Possibly I made his chin a little heavy on the stubble, though?  Still, this is probably more realistic than the normal well-shaved and groomed Hollywood image (with just a hint of tangled hair to show that he's a wild man!). 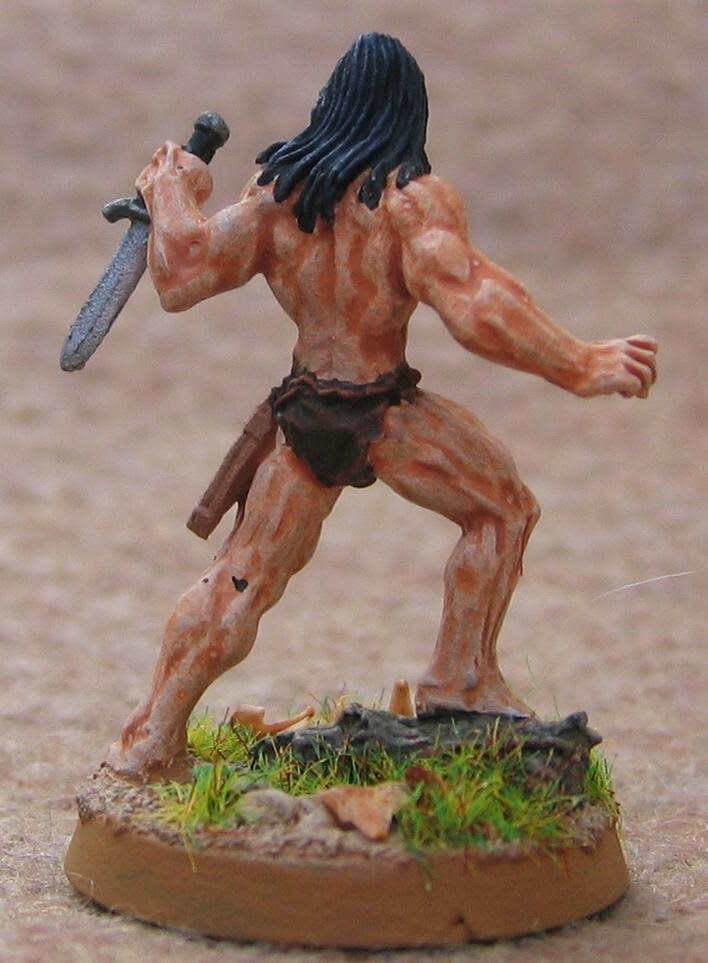 Easy or not, this model has been languishing on my workbench for many, many months.  It was only really when I saw the responses to my recent article on Explorers that I decided to finish him off.

I've got a tub of 40 or 50 rubbery "wild animals" that I bought from a B&M store (a large discount warehouse, for those who haven't encountered the chain before) for £2.99 some time ago.  Although these are a wide variety of scales, perhaps half the creatures are usable for 28mm with a stretch of the imagination.  There are 4 oversized "chimpanzees" (?) in the collection; I hope to use these as Great Apes to back up the jungle man.  The first of them is undergoing experimental basing and painting even now, but isn't ready to be seen yet.

Actually, there's a good reason why this post is a bit rushed and I haven't got much to show.  I've spent a bit of time recently playing games with my sons instead of making models r writing blog posts.  Yesterday and tonight my middle boy and I played "The Awful Green Things from Outer Space" - a real blast from the past for me.

In the first game, my son was doing really well as the crew, until he tried to trap a whole load of my things with an electric fence.  Unfortunately, the random effect for the fence was "1d6 fragments" and I rolled a lot of very high dice.  Suddenly, there were green things spilling out of the cargo hold in huge numbers!  2 of his crew eventually escaped in the scout boat, only to wander for 10 years before vanishing into a black hole...

Tonight's game was slightly different.  I took the crew and pretty much every weapon I tried just turned the green things into multiple fragments.  My son had me completely outclassed, but decided to let me rally my remaining people and escape just so he could see what happened next.  I set the self-destruct and abandoned ship with enough crew to score a technical win.  The 8 survivors then stole supplies from hostile natives on one planet before losing 6 of the crewmen to 2 bouts of disease.  The remaining pair did reach their home planet in due course, which is quite an achievement - even if the victory was a gift!
Posted by Colgar6 at 21:49