Last time, I showed some models that I had prepared with a white undercoat.  Well, I've now completed the apparitions that I plan to use in Fear and Faith.  These will be opposition for Mystery Incorporated and should, I think, strike terror into the hearts of Scooby Doo and company (not that that's very hard, mind you!).  I've also painted up their boss, so read on...

The big baddie for my planned game is the Skeleton Knight.  He's from a pack of Black Tree Design undead knights that I obtained a long time ago, though I cannot remember why I bought these.  Perhaps they came in some bulk eBay purchase rather than direct from the manufacturer?  I'm not sure, but it doesn't really matter now.

He's quite a big model, though if anything I think that just increases his suitability to be a Scooby Doo villain.  After all, if it is just a costume then there needs to be room inside for the operator.  In any case the teenagers wouldn't be as frightened of something smaller, I think!

This was a very easy model to paint.  I undercoated in grey, then touched up the plate armour with steel.  All of the metal parts were then given a wash of metallic black (this is my favourite way of painting chainmail - just undercoat and wash!).  The bone was painted with a pale tan and then given a darker brown wash.  That just left the gauntlets, the belt and the horns on the helmet, which were all painted individually.  Oh, and the base, but that's pretty simple too.

In the game, he'll be mobile and quite terrifying, at least to start with.  However, if Mystery Inc. can find some clues before a final confrontation then his stats might just melt away! 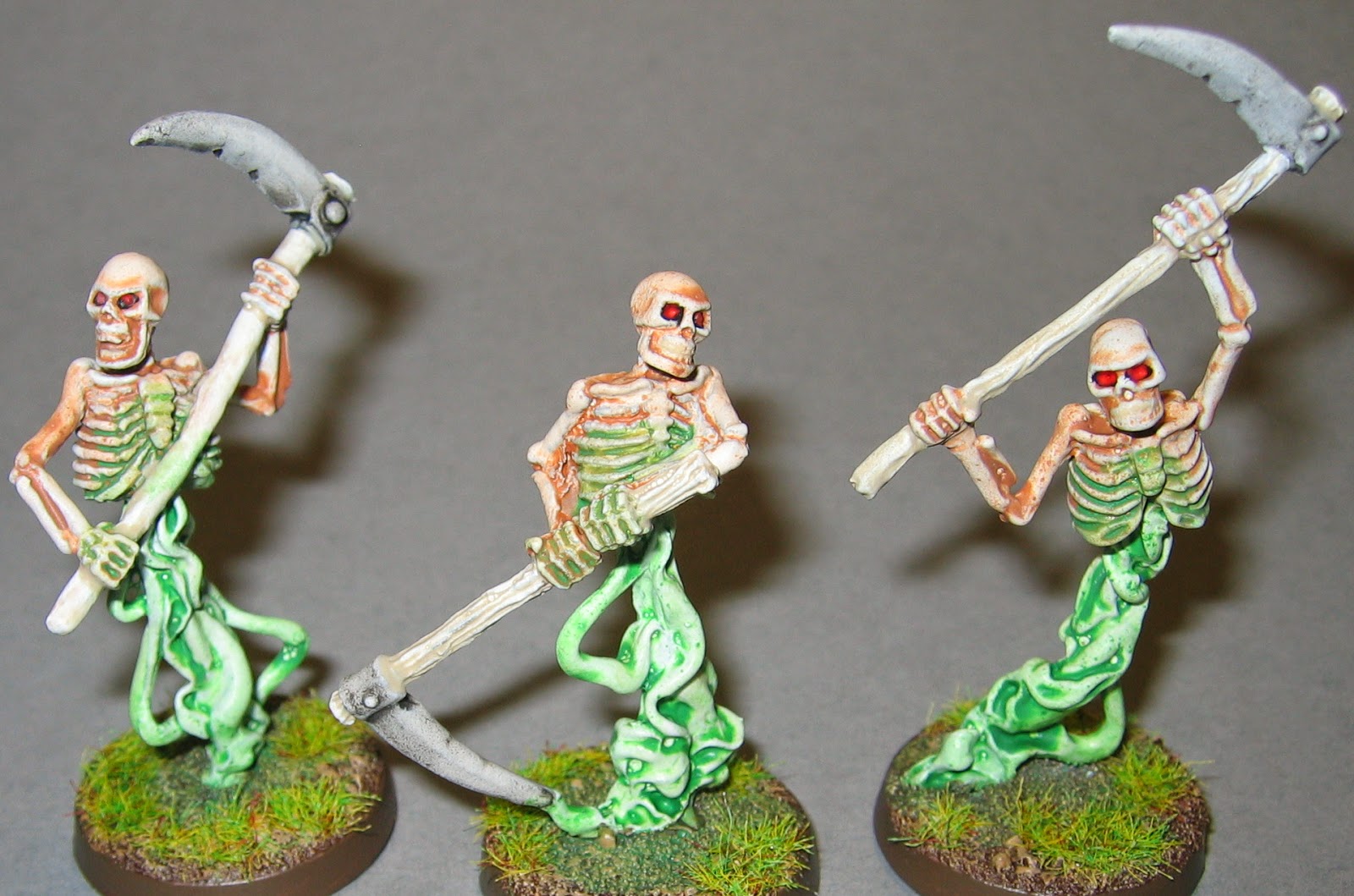 As I mentioned in the previous article, these models are also from Black Tree Design.  Again, they're quite big (they are on 25mm bases), but that's OK since I want them to tower over the humans.  I'll give them the Haunt trait from the Fear and Faith rules - that will tie each to a single location and prevent all the evil forces from just ganging up on Shaggy and Scooby!  This also fits my intended background for such apparitions: they're really just film projections onto white walls or clouds of dry ice.  Maybe!

The spectres were undercoated in white.  After that, I applied a brown wash over the bony bits, followed by a bright green wash over the lower parts.  I deliberately extended the green wash a little way over parts of the ribcages and also over the dirt on the bases.  The scythes were done with further washes and finally the eye sockets were painted in solid black and topped off with red spots.  Very simple!

Right, now I need an assortment of innocent and suspicious-looking bystanders (I'm working on some!) and a suitable setting.  Then I'll be able to put on a small game with Scooby Doo and company in it - awesome!