I'm a great fan of vac-formed plastic for terrain.  It's light and cheap and easy to work.  Some people may find the lack of detail to be an issue, but it doesn't bother me.  I have fond memories as a child of buying many of the old Bellona pieces, though sadly they are long gone and there doesn't seem to be much archive data about them on the internet.

A short while ago, I ordered a few products from Amera.  My first thought when the parcel was delivered was "Oh, my - it's a huge box".  Dimensions are given for each of the products in their catalogue, but I hadn't paid much attention to them.  OK, that's not really a problem - terrain features shouldn't be too cramped or else figures won't fit in them!

Rather than describe all the pieces in the box, I'll show how I handled just one from start to finish.  This is mainly because it's the model that I've finished; the others have all been started but progress on them hasn't been as swift.  Hopefully this will also give you the idea that these pieces are really quick and easy to prepare. 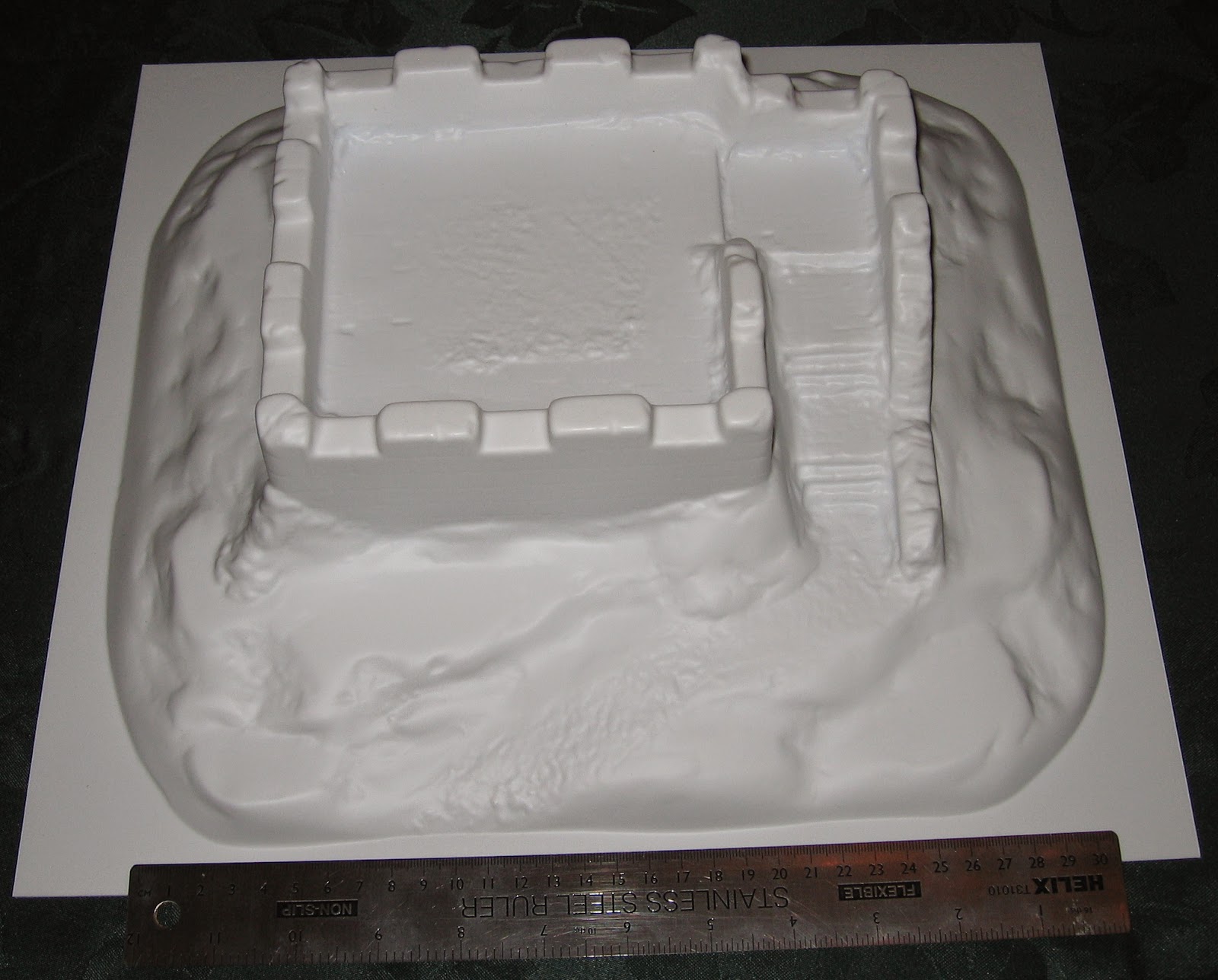 The castle keep consists of a small rectangle of crenelated walls set on a hill, with a broad staircase leading up one size.  The hill is about 13" (33cm) across and the battlements are perhaps 5" (13cm) from the ground.  It may not be obvious from the picture, but there are small, flattened areas all over the hill, presumably so that figures on standard 1" (25mm) bases can stand there.  In the same vein, the staircase has a flat platform every few steps, easily big enough to hold a 28mm miniature. 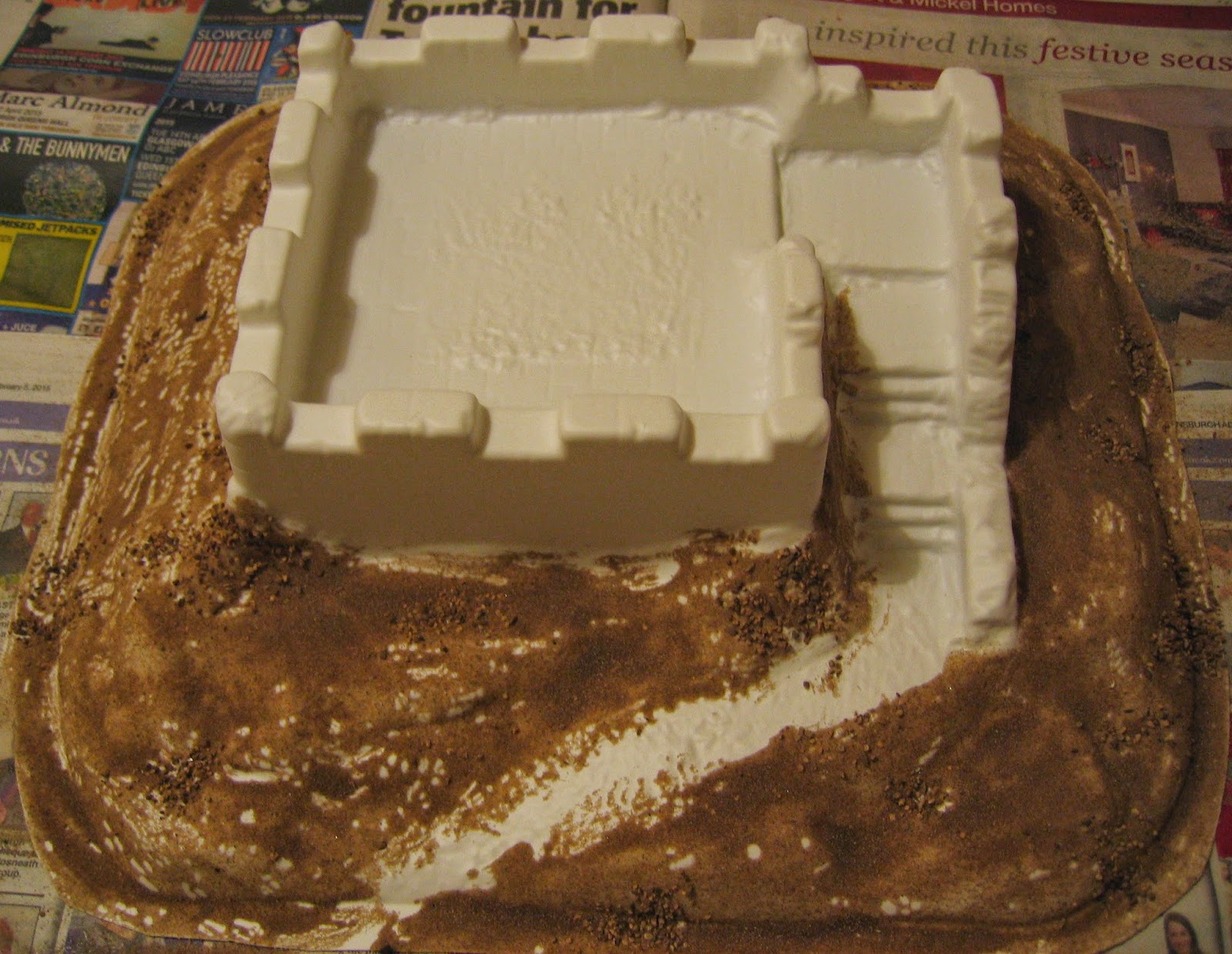 I started by trimming the square base into a more rounded shape using a heavy pair of scissors.  This was fairly tough work; the plastic was about at the limit of thickness that my scissors could handle (and I wouldn't use high quality dressmaking scissors for this either - they would end up blunt or worse).  Partly I wanted to reduce the possibility of the sharp corners snagging on anything either during a game or in storage and partly I wanted to improve the appearance by removing the hard, straight edges from the base of the model.

Once trimmed, I coated the non-masonry parts of the model with tacky glue and then sprinkled this with grit (in clusters), followed by sand. 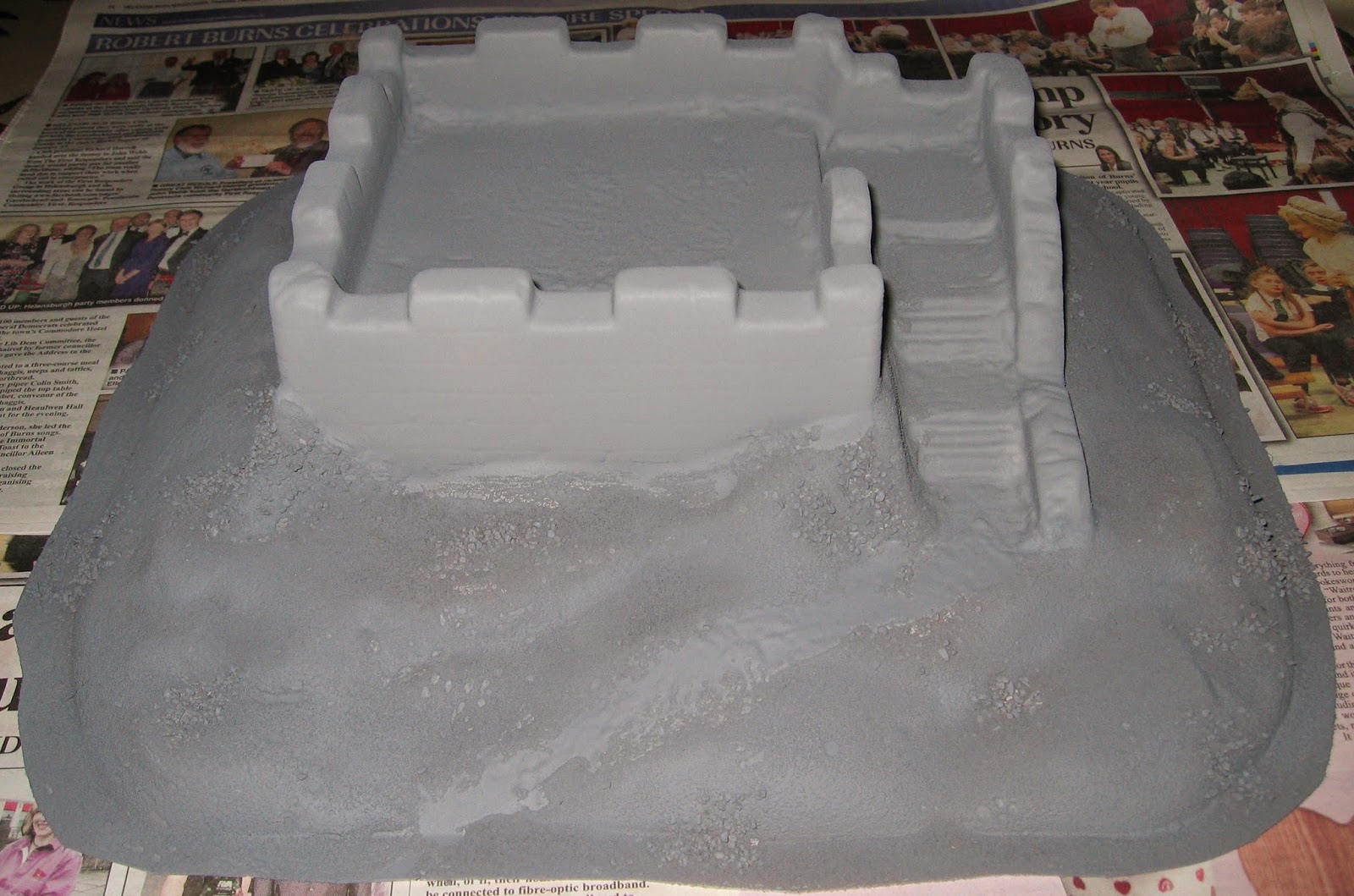 The piece was then undercoated.  I used the last of an old can of Games Workshop's "Roughcoat", which is (was - they don't make it any more) a mildly-textured spray paint.  It's as if there were some very fine grains of sand in the paint, which makes it very good for otherwise featureless terrain.  Now that I've finished the can, I'll have to look in my local hardware store for a similar type of spray from a different manufacturer. 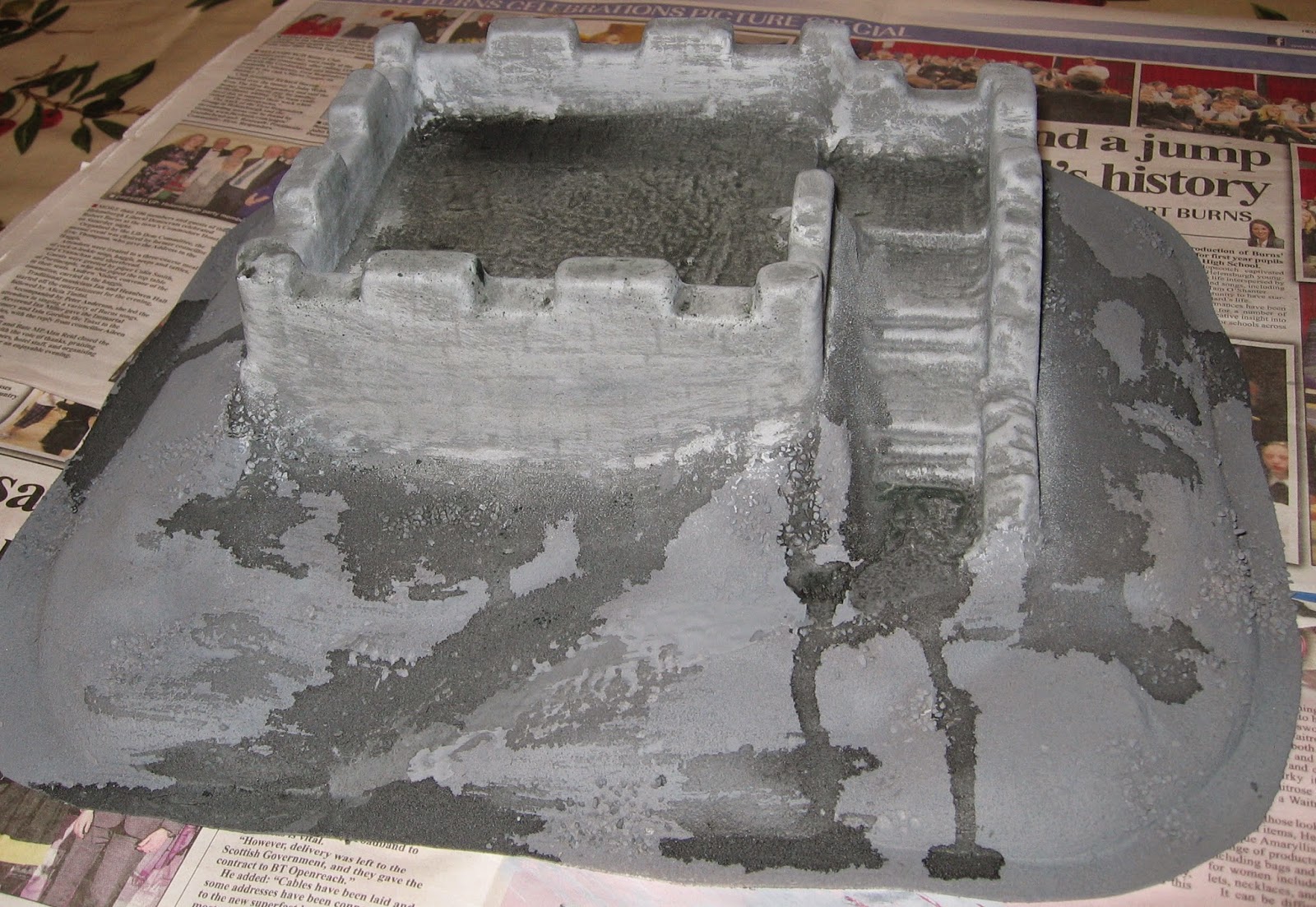 After the undercoat, the masonry was given a wash with thinned-down black paint.  When that was dry, I dry-brushed the walls with a light grey. 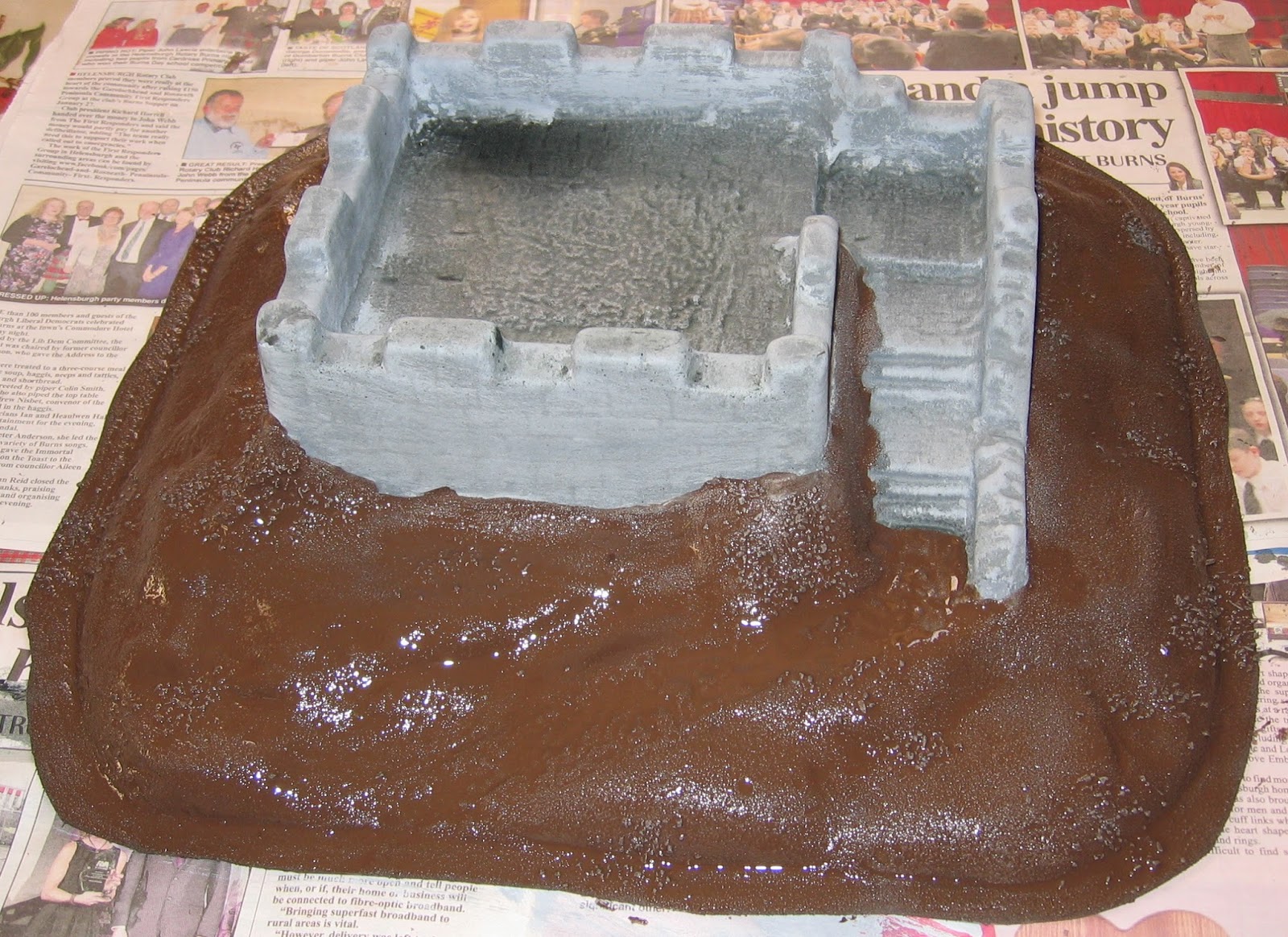 On to the ground.  The dirt received a base coat of chocolate brown (raw umber), followed by dry-brushes of 2 successively paler browns. 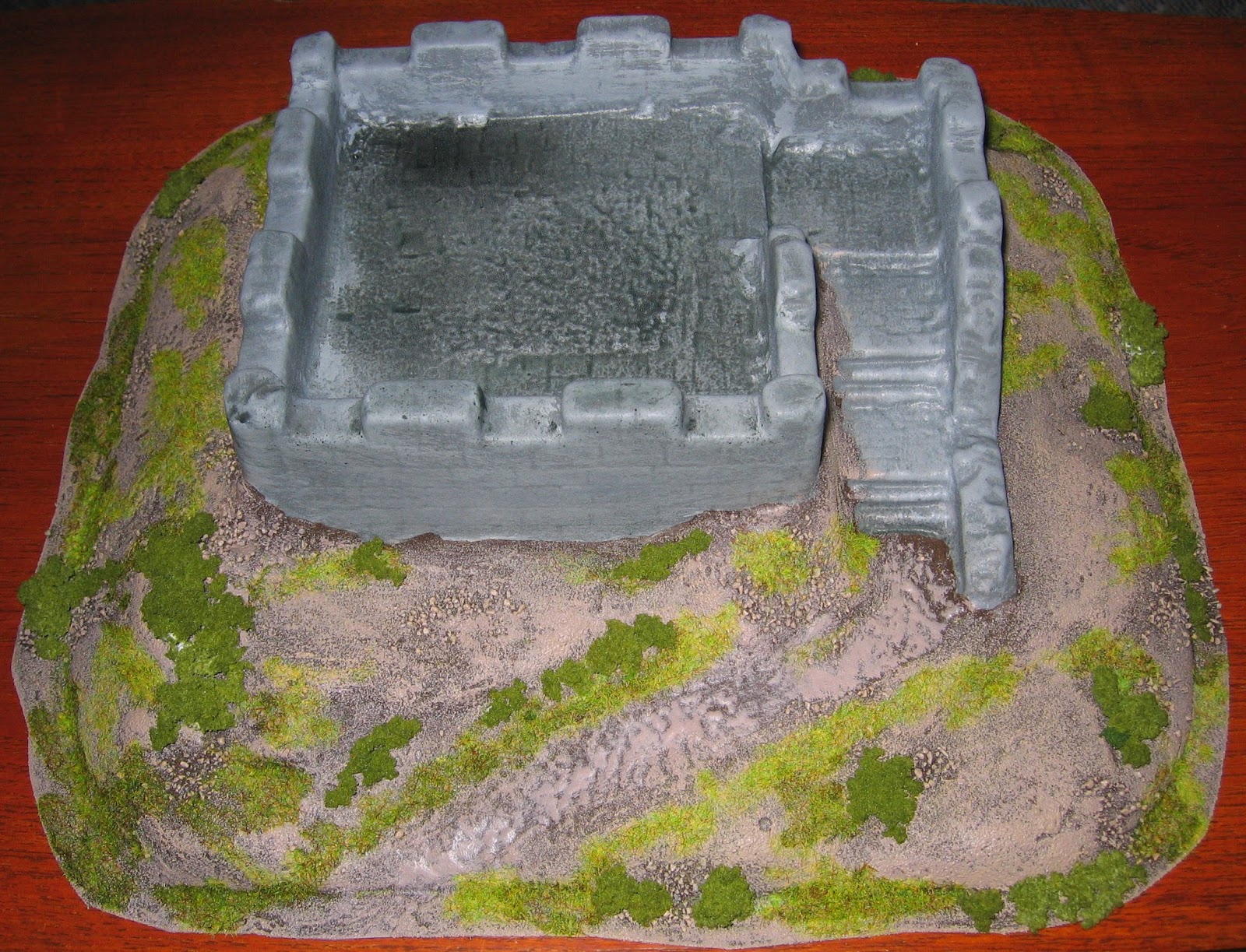 Finally, flock and clump foliage was glued to the model fairly liberally.  In doing this, I tried to follow the following principles:

Big isn't difficult!  This model took no more than an hour or two of effort (though considerably longer than that in drying time).  It was also cheap; the castle keep cost no more than 2 or 3 28mm metal miniatures from the likes of Hasslefree. or maybe 10 plastic figures.  It's not a perfect representation of any real-life building, but it is designed for gaming and will work very well in that role.

Hmm, I wonder if I should have added a flagpole right in the centre? 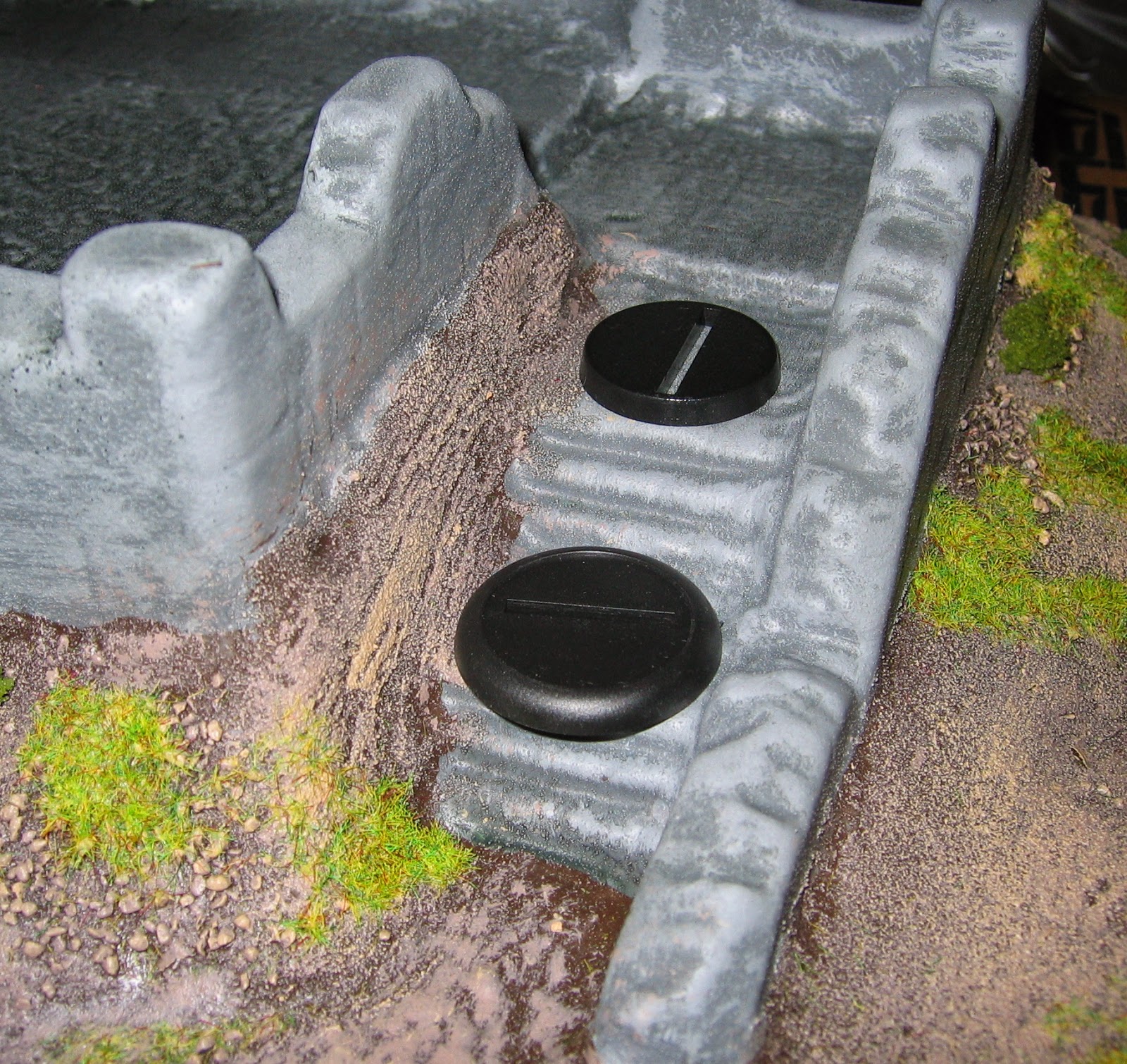 Simon Quinton has asked how big the stairs are on this model, so I've added another picture to the article.  The lowest flat part of the staircase is the smallest, but even that has the width for a 30mm base (just). A small part of the 30mm base overhangs the step below, though I think it wouldn't be enough to destabilise a model.  The 30mm base fits easily on any of the other platforms and on many parts of the path leading up to the keep as well.

The 25mm base has no trouble at all in fitting on any of the steps or other flat spots.

To see this castle in use, have a look at this battle report: Robin Hood's Escape.
Posted by Colgar6 at 20:35