Once again, I'm finding it difficult to find the time and the enthusiasm for a decent post.  This was supposed to have been written on Sunday, but it's now 2 days late.  Still, that's enough whining, so on with the show!

We've now played 4 games in our Dreadball league with my 5 teams (men, women, orx, rats and bugs).  All the games (apart from 1 landslide) have gone down to the wire, with the winning score typically being made in the last rush of the match - and most of them hinged on a single dice throw at the end.  Standings are as follows: 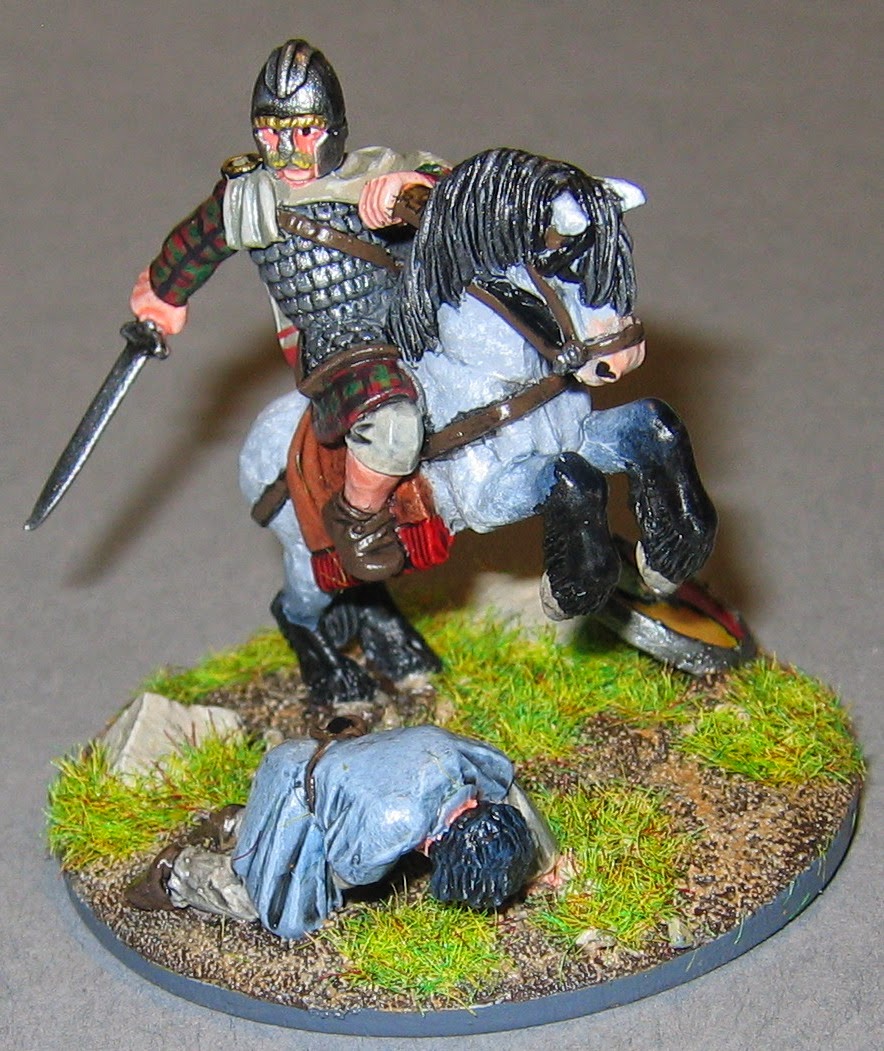 I've just recently completed "Coroticus", the warlord for my SAGA Strathclyde Welsh warband (henceforth just Strathclyde).  These are very much the local boys for where I live and that itself is something of a departure for me since I've never really collected armies from my own country before.

Some people like to collect American forces if they come from the USA, British armies if they live in the UK or Slovenian troops if they live in Slovenia.  However I've never felt a strong desire to do this and in truth, the distance in history between me and the Strathclyde makes them as remote as if they had lived on the other side of Europe. 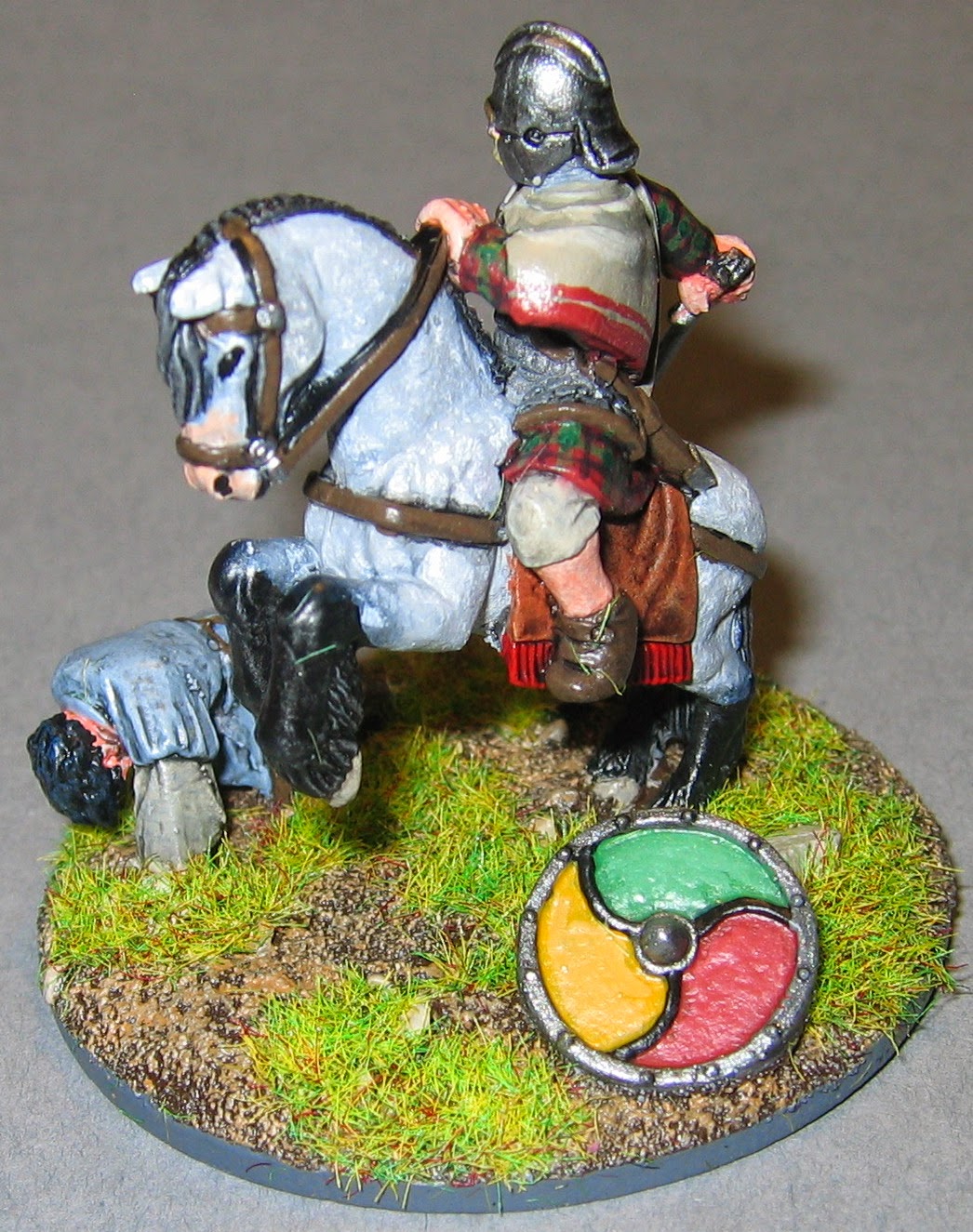 On the other hand, I can look around the local landscape and try to imagine it without all the modern houses and roads, as it might have looked in 800 AD.  Whilst there's nothing left of the structures that the Dark Age inhabitants might have lived in, there are some artifacts.  For example, there's a "hog back" Viking gravestone in Luss churchyard, on the banks of Loch Lomond (though this is probably from the 1263 campaign and therefore somewhat later in history).  Other similar gravestones have, I believe, been found at Govan on the river Clyde.  And there's always Dumbarton Castle, the ancient capital of Strathclyde, which is only 10 miles or so from my house. 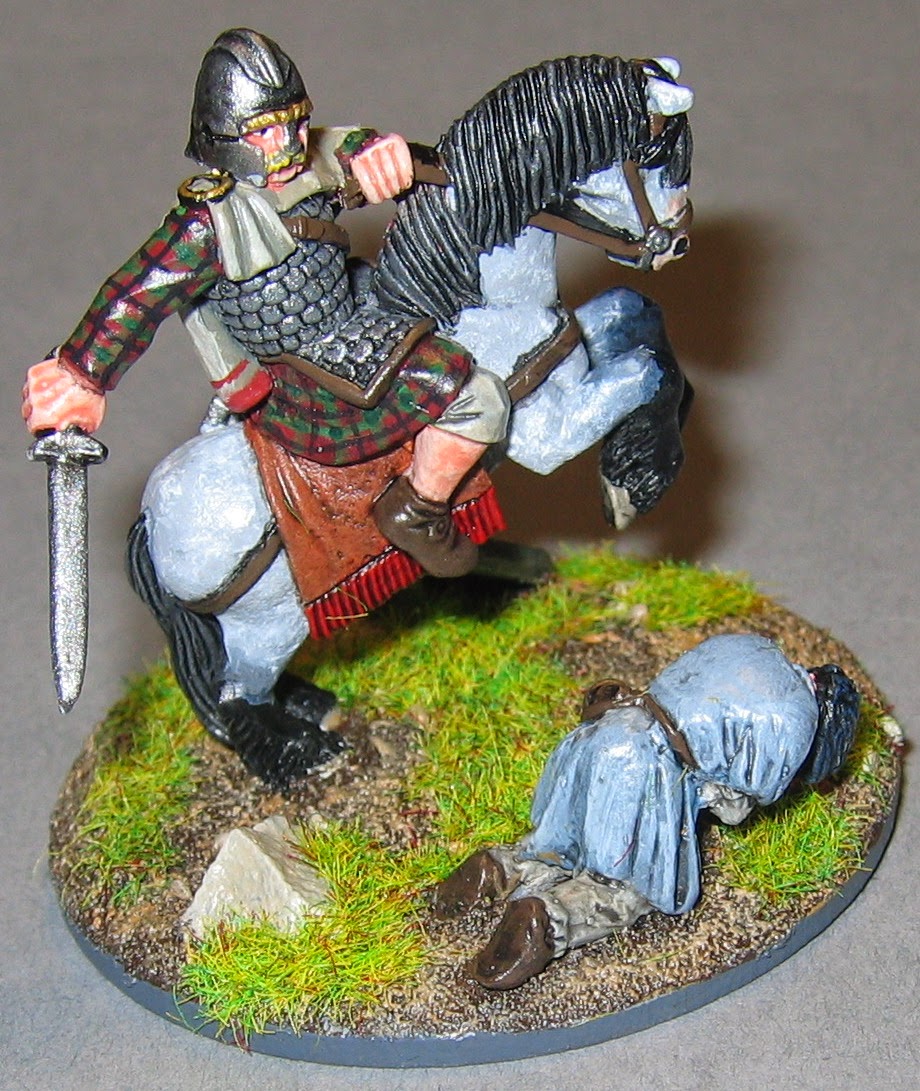 So, Coroticus is a Gripping Beast model.  He's the same sculpt that they offer for their Welsh warband of the same period, which is quite reasonable as the Welsh (in Wales) and the Strathclyde Welsh were closely related.

I've hinted at an association with the Scots (the tribes further to the east and north) by giving Coroticus a tartan tunic.  Actually, it's not a "real" tartan in any modern sense of the word, but one of my simplified tartans.  If this needs to be rationalised then I would claim that they probably had less complex patterns of cloth 1200 years ago.  Also, I have trouble painting fine lines...

The casualty on the base is a Viking, so definitely an enemy!  How do I know that he's a Viking?  They wore trousers, whilst the Celtic peoples of the time went bare-legged.

Coroticus isn't quite the first model that I've completed for my Strathclyde warband; I've also finished 4 hearthguard.  However the entire force is mounted and this is slowing down my progress considerably.  Horses aren't that difficult to paint (at least, to a reasonable level, if not a superb one), but they are big and I find the sheer expanse of bare metal somewhat offputting!  Still, I'll get there in the end.
Posted by Colgar6 at 20:33