Batrep: The Witch of Nether Thicket

It's been my custom for several years now to play a themed game on or near Halloween.  This year, we got out my 17th century witches and witch hunters again, for another outing with the Song of Blades and Heroes rules.

We decided to play the Place of Power scenario from the basic SoBH rulebook.  In this, a terrain feature gives in-game bonuses as well as victory points to any magic user who is located in it.  An ancient runestone was located in the middle of the woods; perhaps the witches could use it to increase the efficacy of their black magic?

In a slight change to the published scenario, we decided that a witch would score 1 victory point for each 2 turns that she was in contact with the place of power, rather than 3 points only at the end of the game.  The basic scenarios in SoBH have no time limit and victory is effectively determined by who remains on the field of battle.  That being so, I saw no reason why the witches should get an extra 3 points if they had already won!  In addition, the per-turn bonus would add some time pressure to the game; it would force the opposition to deal with any witches rather than just hanging back and waiting.

We played the game with 300 points per side, or near to that.  At most half of this could be spent on "expensive" models (50 points or more each). 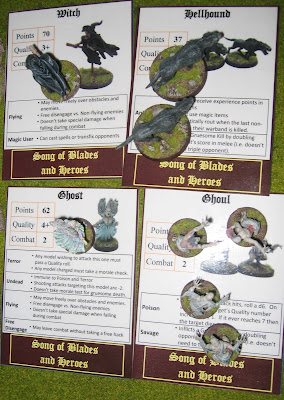 For the witches, I chose the following:


So, my plan was this: get the witch into contact with the place of power and start racking up victory points.  Use the hell-hounds to hunt enemy heroes and the ghost to scare off the common soldiery.  The ghouls are there to skirmish with anyone who tries to get smart and outflank me, or to assist in outnumbering an enemy hero.

Playing the forces of humanity, my sons decided to take: 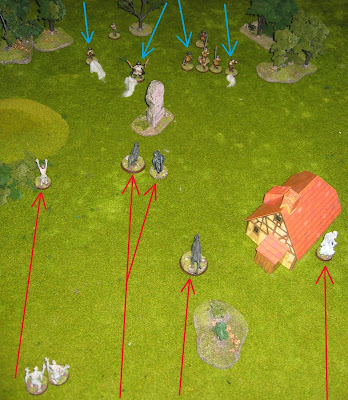 To start with, both sides advanced towards the central runestone.  If anything, the humans moved with a bit more purpose and organisation, due mainly to Major Fairfax's Leader ability.  A few long range shots were attempted, but these were all wide of the mark. 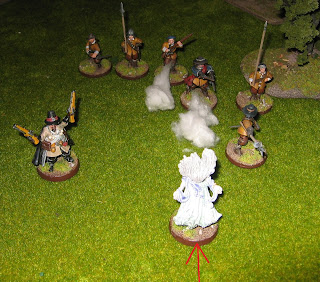 The ghost then caused consternation by advancing directly towards the largest group of soldiers ("Why yes, a ghost can move straight through a building").  Muskets and pistols were fired at the apparition, but it came on regardless. 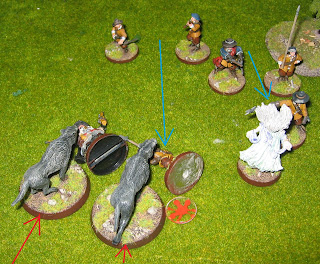 Whilst the humans were distracted with the ghost, a huge hell-hound charged out of the gloom and bowled over the witch hunter.  Indeed, he had to use his hero's "once per game" re-roll to save himself from a brutal demise from the devil dog's jaws, but the re-roll converted his original throw of a deathly '1' into a respectable (but still losing) '5'.

A second beast followed, but before it could tear out the throat of the unfortunate man, one of the soldiers reacted and attacked it.  With contemptuous ease, the monstrous creature tore the poor squaddie into screaming, bloody chunks. 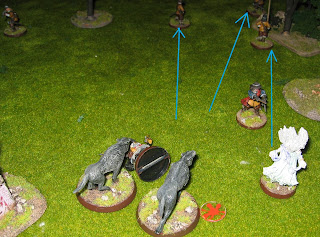 Despite Major Fairfax's cries of "Stand firm, my brave lads!", the common soldiers were appalled at the carnage of the gruesome kill; to a man they all turned and fled (though none of them ran off the table and away for good, sadly).

So far, this was going swimmingly for the witches! 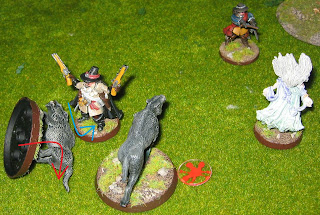 Maybe I was cackling too soon, though.  In one turn, John Sterne regained his feet and gave the hell hound which was over him such an almighty buffet that the beast fell to the ground, momentarily senseless.  How the h**k did that happen?  I suppose that his Hero attribute gives him the right to perform superhuman acts of gymnastics, not to mention out-of-time judo skills... 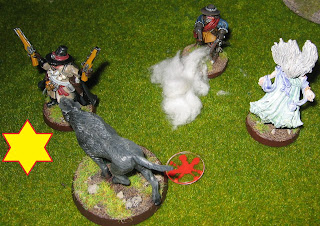 Before anyone else could react (I threw a double activation failure for the first model in my next turn and therefore couldn't do anything), the witch hunter pulled out a pistol and shot the monster dead.  This guy is too much! 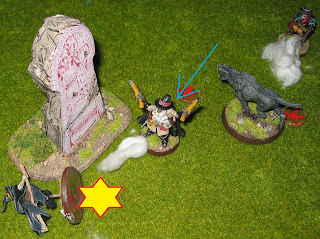 Whilst the rest of us just stood there, gawping, he stepped over the corpse of the hell hound, levelled his other pistol and shot the witch dead too (I threw another double activation failure for my first model and so missed another complete turn).  What the... 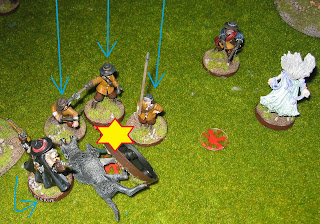 Encouraged by this (and by the shouted orders of Major Fairfax), several of the soldiers then charged at the second hell hound.  Whilst it was thus distracted and outnumbered, the witch hunter turned round and slew it too.

At this point, I conceded the game.  Whilst I still had the ghost and 4 ghouls, it didn't seem at all likely that they could wipe out the enemy force on their own.  So: the final tally was 1 witch and 2 hell hounds slain (5 victory points), versus 1 soldier killed (0 victory points) and 1 turn of communing with the runestone of power (0.5 victory points).  Despite it being Halloween, the forces of darkness were hammered!

I think that my plan was reasonable, but I was hampered by a series of very poor quality rolls just at the critical moments.  Of course, every roll in SoBH is critical - but some are more so than others!

As for John Sterne, the witch hunter - I'm beginning to really hate the man!  Of course, that's because I always play the evil side and I haven't really worked out how to deal with him...
Posted by Colgar6 at 15:14