It's week 4 for Zomtober 2015; the last week of the event this year (it is the last week, right?  The 31st is a Saturday and the Zomtober week ends on a Sunday, doesn't it?)  So here's something slightly different.  It's still a duel, in the sense of one survivor base against one zombie base.  However this time I've chosen to build a "horde base" rather than just a single zed.

It's close to midnight and something evil's lurking in the dark... 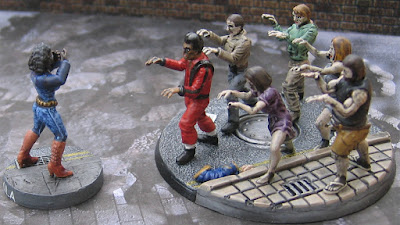 This week's survivor is "Ola".  She's a stylishly-dressed, young, African-American woman who can't quite believe whats happening to her.  Indeed, she's trying to shut out the sight by covering her eyes (I had intended for the hands to be covering her mouth, but I mis-positioned the arms before attaching the separate hands).  Ola's body and head are standard pieces from a Wargames Factory set, but the arms and hands are heavily-modified parts from all manner of sources. 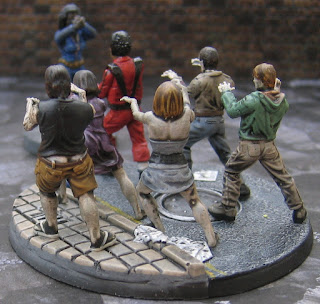 The zombies are, I think, some sort of dance troupe.  Their leader (I'll call him "Jacko") is also dressed up for a night out.  In this case, he has a red suit with black trim and shoulder panels, white socks and black shoes.  The torso for this figure is from a Studio Miniatures plastic zombie and the legs are from Wargames Factory.  Green stuff has been used to lengthen the trousers and add the jacket decoration.  After sealing the base, I applied gloss varnish to his hair and the black parts of the jacket to make them really shiny. 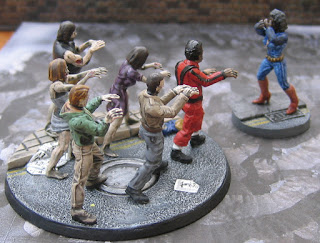 The other 5 zombies on the base are also plastic Wargames Factory/Studio Miniatures mash-ups.  In each case, the bodies and heads are unmodified, but the arms have been considerably altered to get them into the classic "zombie advancing" position.  Note also that these "supporting" zeds have been painted in somewhat muted colours so as not to draw the viewer's attention away from their leader. 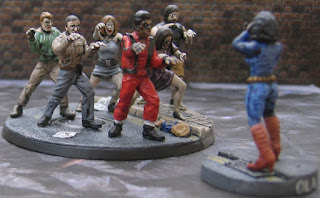 The base is from Escenorama; I've discussed them before: here.  Suffice it to say that it was a hellish job to cut the base down to size (it was too thick to start with), but that it's a really nice moulding otherwise. 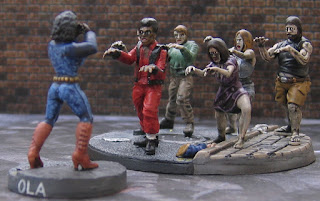 So here's what I think: Ola believes that she's having a nightmare and that she'll wake up any moment now to find that this isn't happening.  Maybe she's right.  But even if this is the stuff of nightmares, who says that the real world is any better?

Mind you, I think that the zombies are spending so much effort trying to match their dance steps that they aren't really paying attention to Ola.  Maybe they think that she'll be mesmerised into standing where she is rather than running away (like any sensible girl would do)?
Posted by Colgar6 at 14:40