Another Sunday, another Zomtober challenge entry.  Will the madness never stop?

Naw, it's all right really; I'm loving it!  I've probably painted more miniatures this month already than I did in the previous 3 months put together - and they're not all zombie-related either.  For Zomtober this week, we have an old mini that I've finally finished (after it had been on my workbench for what seems like years) as well as a brand new figure, built from start to finish in the last 10 days or so. 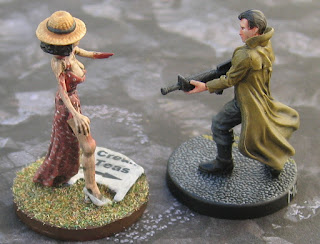 Once again, I shall present a duel between a survivor and a zombie.  This time, the confrontation is between Father Murphy and Garden Party Zombie (hereafter "GPZ"). 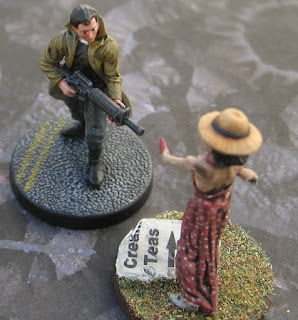 Father Murphy is an out-of-the-box build from the Wargames Factory "Apocalypse Survivors: The Men" kit.  I glued this model together many months ago and started the painting, but didn't get very far before I ran out of inspiration.  He seemed to be just another fairly bland, assault-gun-wielding, trenchcoat wearing action guy and that didn't excite me enough to complete the model.

As part of this Zomtober challenge, I looked at the figure again.  It suddenly came to me that a black shirt and a white dog collar would turn him into a priest.  Suddenly, the model had a completely different vibe! 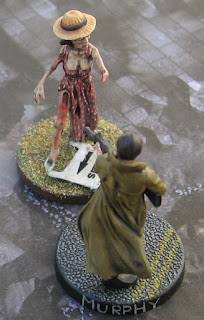 GPZ is a "Zombie Vixen" (again, from Wargames Factory).  She's had a hat added from a Warlord Games set of Royalist Infantry, although I think it's sitting a little bit high on her head.  It seems that straw hats were all the rage for 17th century English peasants as well as for modern ladies...

Her base is made from a Basius II pad, though all of it apart from the fallen sign has been covered with flock.  The lettering on the sign is a home-made decal. 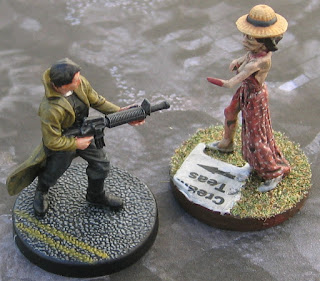 GPZ has been in the wars a bit; she has torn clothing, significant wounds to her leg and one arm is partly missing.  For all that, she is (was?) a tall, if somewhat skinny woman and probably has a certain amount of physical strength. 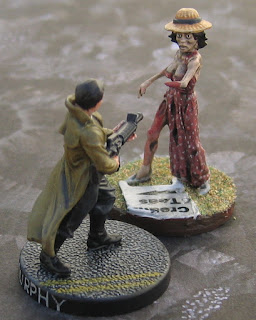 Who will win this encounter?  Father Murphy has obtained some heavy weaponry from somewhere, but does he know how to use it?  He's firing from the hip (never a good sign) and he seems to be aiming at her torso.  Whilst a burst from an M-16 will certainly chew up a zombie badly, it won't finish the job without a head shot.  Does he know what to do and is he capable of executing it?

On the other hand, GPZ looks somewhat surprised to find that she is indeed a zombie.  If she has any remnants of her previous humanity left then she might be too well bred to chow down on the vicar, at least at first.  How will this end?  I'm not sure...