The Tesserae Incident: part 1 (the Scenario)

Some of you with long memories might remember a game of Full Thrust in which a Klingon fleet investigated a secret Romulan research base: here.  This game was played 2 years ago, almost to the day and I thought that it was high time we gave the Klingon fleet another chance (it was hammered in the previous game).

However, rather than replay the game exactly as we did in 2014, I thought that I'd change the scenario around a bit.  Rather than having a small Romulan force already on table, we'd have a much larger Romulan fleet arriving slowly over time.  This would give the Klingons an advantage early on, but they'd have to move quickly to achieve their objectives or risk being overwhelmed later on.  Additionally, I thought that this would be an excellent testbed for my half-baked revision of the Full Thrust boarding rules.  The original rules for marines are extremely basic; it has long been an intention of mine to experiment with something slightly more detailed. 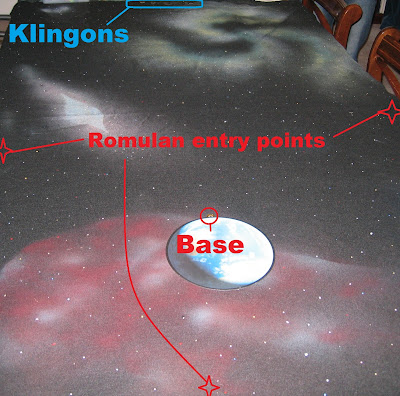 So, the Klingons have to raid the planetary research base, steal whatever data, materials and personnel (scientists, technicians) they can and then make their escape before the ever-escalating Romulan response becomes too much for them.  Sounds simple, right?

Well, standard boarding (using transporters, short range pods or similar) in Full Thrust requires the attacker and the defender to match both speed and heading (to within 1 point of each) and to be within a fairly short distance (6mu, from memory).  This is so difficult to achieve as to be effectively impossible if the target is mobile; it's hard enough even when the defender is a stationary planet!

To overcome this difficulty and give them a reasonable chance of success, the Klingons have been given a fast attack transport equipped with assault shuttles capable of ferrying a generous complement of marines.  These assault shuttles are detailed in the Full Thrust: Continuum supplement, though I've modified some of the rules for their use here. 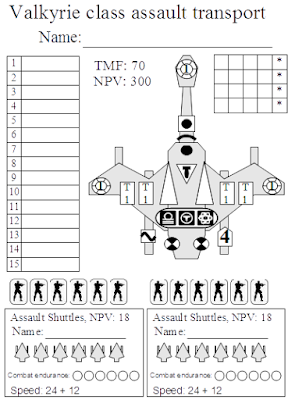 This adds up to around 800NPV, excluding the assault transport (which the Klingons get for free).  The Relentless and Valhalla are capable, fast ships though the frigates are pretty useless. 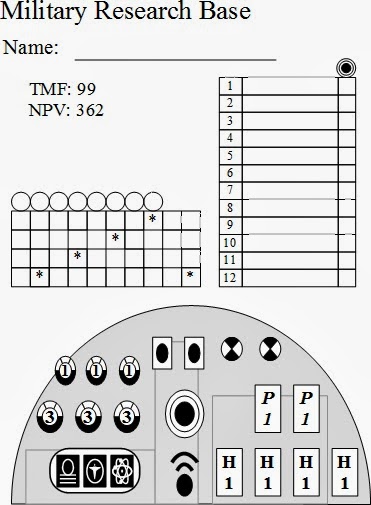 The Romulans have about 1200NPV of ships (plus the base, which is free).  They outgun the attackers by about 3:2, though this is tempered by the fact that their ships arrive piecemeal and over a number of turns.  Fortunately, all the Romulan ships have cloaking devices and so early arrivals can hide until the fleet is ready, rather than risk being annihilated one-at-a-time.

The Klingons must capture the base and carry off research material.  There are a maximum possible of 7 points worth of such loot: 1 for parts from the reflex field generator, 2 from the "P" crew quarters and 4 from the "H" laboratories and stores.  Loot can only be captured if the system hasn't already been destroyed in the fighting!

Each point of loot is a full assault shuttle load or it can be transported as per the standard Full Thrust rules.   It must be taken to a warp-capable ship which must then escape in order for it to be counted.

Obviously the scale of victory is from 0 (the Klingons fail completely) to 7 (total Klingon success; every loot point retrieved).  All else, including casualties, is really secondary to this!

On average, Romulan forces on the table will have achieved parity with the Klingons by turn 4, but they might be lucky and receive heavy units early or they might be unlucky and only get small ships by then.  The Klingon will have to guess when (and where!) the Romulans will appear, whilst the Romulans will have to plan for the uncertain location and timing of their reinforcements.  Should they try for an all-out uncloaking & assault for turn 5 (say), or is it worth having a smaller number of ships uncloak earlier?