In my last post, I suggested that I might show some more Super Dungeon Explore figures.  Since that suggestion wasn't met with howls of protest, here we are.  This post describes the Fireflow Denizens, a band of assorted creatures that live in or near the lava rivers of the caverns of Roxor and don't welcome visitors.

As with all SDE warbands, the Fireflow Denizens have a spawning point for use during the game.  In this case, it's a mysterious crystal, wreathed in flames.  Dark magic indeed...

Can I say at this point how much I dislike painting crystals?  There are tutorials on the web for doing this (though they seem mostly aimed at computer art rather than 3-D miniatures), but I've found them over-complex and long-winded.  This is my version of a crystal, distilled from such online advice, and it caused me a lot of frustration whilst it was being painted.  Even now I'm not totally convinced that it looks right... 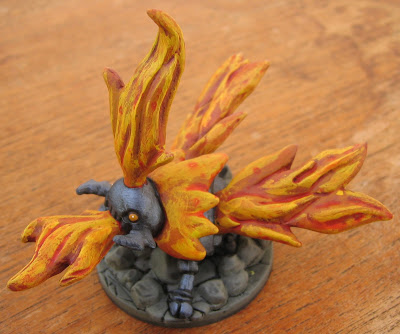 One of the largest critters in this warband is the Blaze Beetle.  Apparently, these creatures tunnel through the hot rocks and occasionally break through into the caverns.  Yes, they can shoot flames from unlikely locations!

I've broken my own rule about copying the publisher's artwork when I painted this beastie.  The animal itself appeared to be made from flame in the game's reference card, but I'd had enough of painting flames by that point.  Instead, I went for a metallic blue body, though it hasn't come out quite as iridescent as I would have liked. 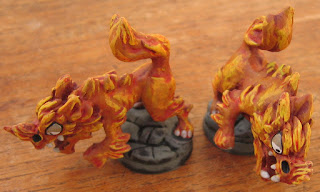 The Ember Hounds are described as "concealed by a cloud of ash", yet the sculpts and the artist's rendering clearly depit them as creatures of pure flame.  I've followed this pattern with my own painting.

It's fairly obvious even from just looking at them that these models are unbalanced; they're very front-heavy.  I had to add weights into the bases before they would stand at all reliably.  Even then, it doesn't take much to topple them over. 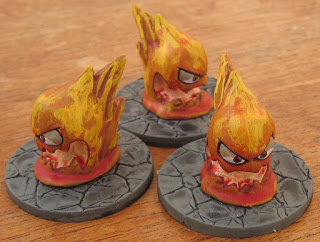 The last of the flame creatures in the set of Fireflow Denizens are the Burning Gels.  These are large, evil, (un)living fire monsters.  They were something of a challenge to paint, mainly because the models are mostly large, featureless expanses!  Additionally, it was significantly difficult to reach into the extremities of the mouths with a paintbrush. 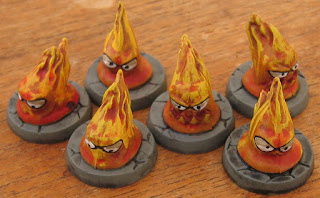 So, what happens when you kill/destroy a Burning Gel?  Well, it turns into 2 Fire Gels!  All the heroes can do is break up the creatures into ever smaller bits and then stamp them out too. 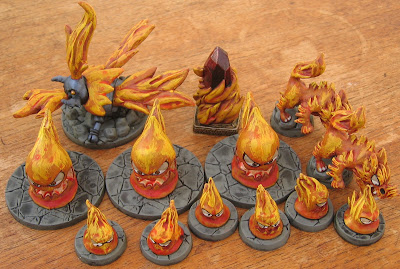 To allow the sizes of the various models to be compared, here is a picture of the entire warband.  I think they're my favourite group so far, at least from the SDE monsters that I have painted.  Mind you, just wait until I have finished my Kodama (plant warriors); they might just become my new favourites once they are done!

I note that several of these sculpts have been reissued as part of the V.2 Mistmourn Coast warband, where they play the part of fog/mist monsters.
Posted by Colgar6 at 12:09