This won't be a long posting.  I was due to write an article yesterday, but it has been too hot to do much.  For about 2 weeks (from memory), we've had bright, sunny weather, culminating today in a temperature of 31 degrees in the office all afternoon and 32 degrees in the car on the way home.  I'm exhausted and limp.

Now I know that some of my readers might not think that such temperatures are anything particularly unusual, but remember that I live in Scotland.  We're just not prepared for such heat, either mentally or physically (and I'm referring as much to our buildings, cars and so on as much as I am to my physique).  20-25 degrees is OK, but today went somewhat beyond that and has drained me.  No new painting or anything much else in the evenings...

Right, here are some models that I prepared earlier.  Several years ago, that is. 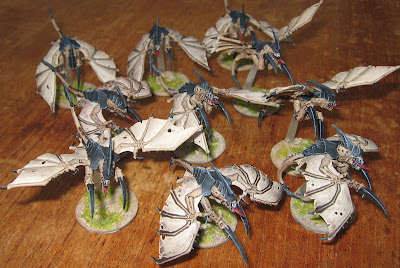 I don't normally buy Games Workshop models (not new, at any rate.  I have collected quite a few cheap pieces over the years from eBay and the like).  In this case, I made an exception.

I remember spending quite a while looking for second-hand GW Tyranid gargoyles to go with the rest of my bugs before I came to the conclusion that only the simple "troop" types were at all common on second-hand sites.  Additionally, I wanted to arm these with spare claws from another kit rather than with the "bio guns" which are supplied, therefore I really didn't want models that had already been glued together.  So, it had to be a from-new kit.

Note that I am not planning to use these in any GW games, so the "non-standard" weapons doesn't matter.  To me, these are just dumb animals rather than biotech-wielding, space-faring aliens.  Perhaps the hive has bred the flying critters as specialist scouts or long-range scavengers, as opposed to the larger numbers of walking/scuttling, earth-bound bugs. 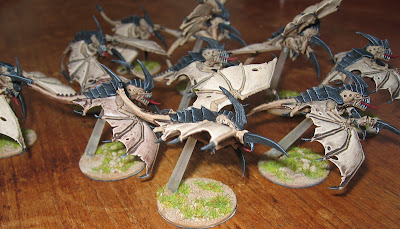 I've altered the bases a bit, mostly to angle the "flying posts".  If built out-of-the-box then these gargoyles would be very much rearing up, but I wanted my bugs to be flying forwards.  I think it saves them from looking as if they're about to stall, though I do recognise that such aerodynamic niceties wouldn't matter to many gamers!

The colour used is the usual two-tone black and tan scheme that I apply to all my Tyranid models.  I decided very early on that if I was going to paint large numbers of bugs then complex camouflage or display markings were out! 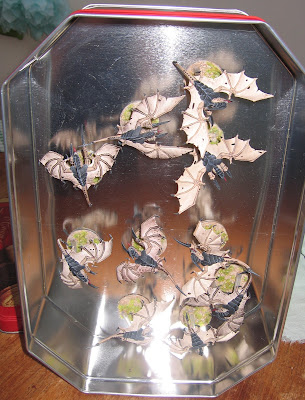 Finally, I gave some thought to the storage of these models.  It's often hard to find adequate ways to protect models with many bits that stick out.  Flying models such as these are especially bad in that respect; they have wings, tails, basing posts and claws protruding all over the place!

Being plastic, my completed gargoyles are very light models.  I attached a disk of magnetic sheet to the underside of each base and searched for an old biscuit tin (cookie tin, if you're in the USA) in which to house them.  This has worked extremely well; my bugs won't even come off if I turn the tin upside down and shake it, yet they're not stuck on so firmly as to make it impossible to remove them by hand.  It wouldn't do for heavier, metal models, but this is just fine for these tyranids.