I'm still finding it difficult to make progress on most of my ever-growing range of projects.  Partly this is because I've been playing a bit of Race for the Galaxy with my sons (which is an excellent card game; I recommend it highly).  Of course, the fact that I've just whipped them in 2 successive games is a bonus; such victories are anything but certain now that the boys are growing up a bit!

Anyway, the main reason/excuse for not doing much model-making is the increasingly-cluttered workbench (yet again!): 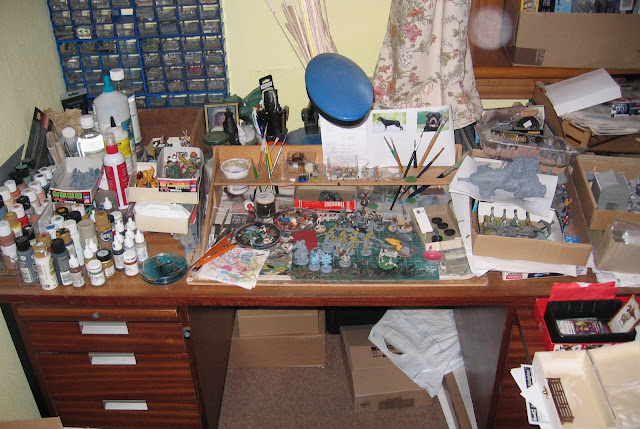 OK, so once again I have boxes and trays balanced on each other, 2 or 3 layers deep.  For the record, I really hate that, yet it just keeps happening.  I can't figure it out...

Focussing in on the central portion only, here are some of the works in progress: 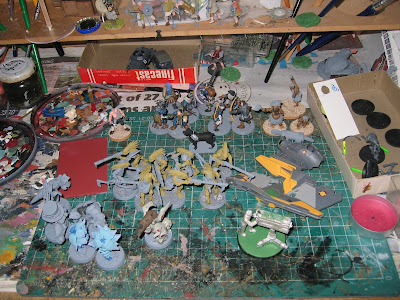 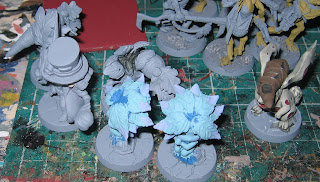 I haven't made much progress on my Kodama warband (intelligent plants).  In part this is because I'm not happy with the paint I've applied to the (blue/green) Wisps so far and that dissatisfaction has halted further work until I decide what to do about it.

On the other hand, Mr. Bitey (the zombie rabbit pet with the rotten carrot strapped to his back!) is coming along nicely.

These aren't my models, but rather are the work of my younger son.  They're still cluttering up my workbench, though!  As well as taking space, he also uses my bench for some of the time that I would otherwise spend painting my own models.  Still, I regard any interest from my children as something to be nurtured, not discouraged. 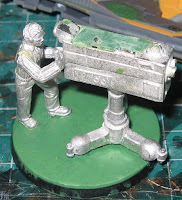 I bought this fellow from Crooked Dice at the Carronade show this year.  As you can see, I've needed to add a bit of filler to the top of the camera; there was a bad hollow in the casting.  Most surprising, given this company's otherwise excellent record.

The cameraman is now just about ready to be undercoated.  I'm hoping that Crooked Dice will follow up with other members of the production crew: a sound-boom operator and makeup artist would be excellent.  Perhaps also a scriptwriter rushing forwards with a last-minute rewrite of the current scene!  I can hope... 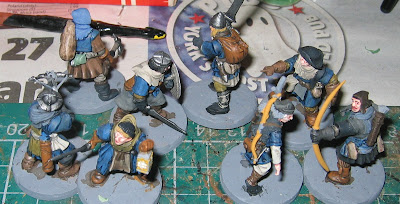 My blue Frostgrave squad are still languishing at the back of the bench.  I really should just get on and finish them; there can't be much left to do on them now!  That would be quite a weight off my mind as these guys have been quite a millstone around my neck.  Hmm, perhaps I'll get a cup of tea first and think about it some more...
Posted by Colgar6 at 20:10

Email ThisBlogThis!Share to TwitterShare to FacebookShare to Pinterest
Labels: Workbench