At last, we played a game of Congo!  In a sense, this is something that I've wanted to do for several decades, ever since I discovered a large cache of books by H. Rider Haggard at Newington library in Edinburgh, when I was a student there.  Those tales sparked an interest in the exploration of Africa by Europeans that has abided to this day.  However, Congo was only available to the general public some 5 months ago.

Since August 2016, I've built enough forces for a small game, but didn't have an opportunity to use them for real - until about 2 weeks ago.  After playing the game, I've been putting off this report for a variety of reasons.  Until now, that is (obviously!)...

Scenario 1 for Congo is entitled "The Last Queen of Aksoum".  A White Man Expedition has discovered an archaeological treasure (the ancient crown of the monarch from a long lost realm), but they may have overstretched themselves.  Tired and exhausted, their camp is attacked by another force who do not want to see the crown carried off.

Note that in the scenario as written, the attackers are Zanzibari slavers.  Since I don't have such a force (yet), we used my Forest Tribes band instead.  We also changed the setting from savannah to jungle. 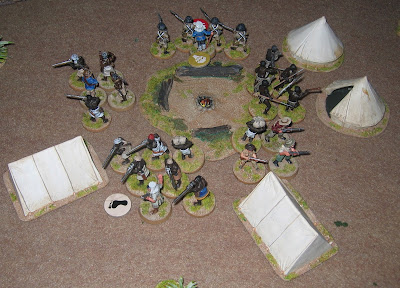 In the middle of the night, Professor Forester's exhausted expedition was awakened rudely.  The two sentries were shouting loudly and excitedly.  Everyone piled out of their tents or open-air sleeping places; white men, Sikh soldiers, ascaris and native auxiliaries - all chattering and confused.  It took Major Forbes' bellow of "SILENCE!" to restore some level of order.  The retired officer then called to the sentries "You!  Report!".  Abashed at the chaos they had caused, the shorter of the lookouts answered "Voices, sir.  We heard voices and movement all around.  There are men in the jungle, close, very close"...

As the White Men, I would score a lot of victory points for carrying the crown off the table in a nominated direction.  Steve (the Tribal leader) would score quite a few points if he could capture the artifact.  Either of us could also gain a few points for each enemy unit eliminated or for finding loot. 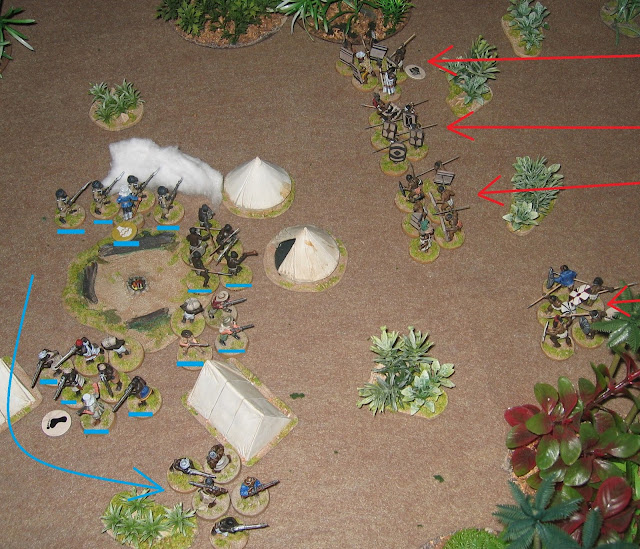 With a shrieking of war cries, tribal warriors broke through the undergrowth and charged the encampment.  They were also having a hard time of it in the dark; several units had taken small amounts of stress tokens and one unfortunate warrior vanished before the game had even started.  Nevertheless, they made a brave showing and the initial shooting from the camp's defenders was completely ineffectual. 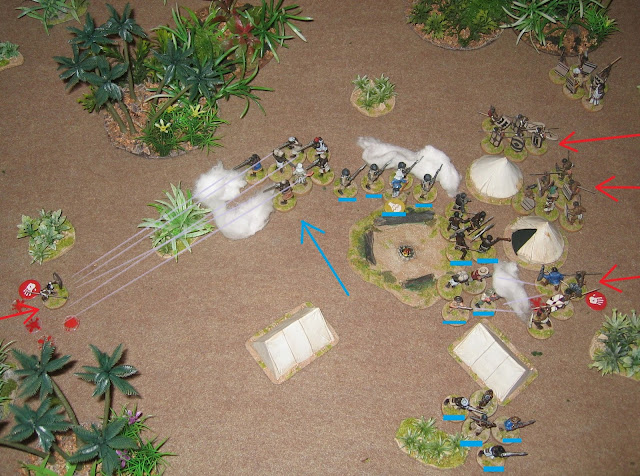 The next volleys from the expedition were more effective, however.  Professor Forester's group of ascaris were trying to reposition when they heard sounds from behind the camp.  Fearing a flank attack, they turned around and fired with devastating effect, killing four of the five warriors who were creeping up on them.

Around the camp perimeter, rifle fire from the adventurers killed one attacker and (more importantly!) inflicted a red "need to rally" stress token on the native unit.  However, the Sikh soldiers still failed to do much - and the tribal champion continued to urge his followers on at speed.

Although in theory the crown of Aksoum could have been held by any one of four figures in the Expedition side (Professor Forester, Major Forbes or either of the 2 bearers), the tribal leader had quickly pinpointed it with Major Forbes.  It barely seemed worth the effort of hiding it... 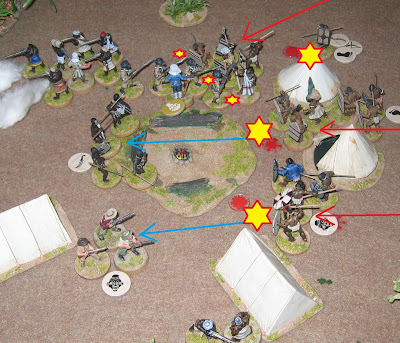 Now it was the forest tribe's turn, as they streamed through the tents and attacked the intruders. 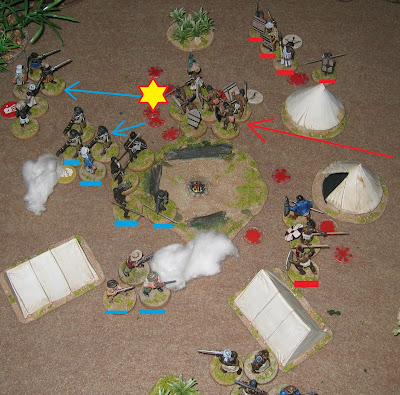 By this time, most of the tribal groups were looking much reduced in numbers; there weren't nearly as many warriors now as there had been.  Although the expedition forces had taken some casualties, these weren't particularly numerous. 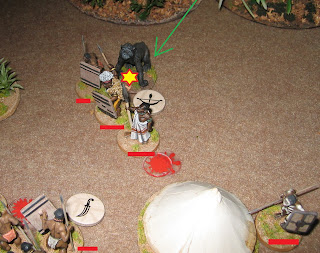 In a slightly surreal moment, a sleepy gorilla charged from the nearest patch of thick trees.  The creature made a beeline for the tribal chieftain and his remaining retinue (they had been hanging back from the assault on the campsite after being targeted early on).

On paper, the gorilla looked to have a good chance of killing the men, or at least some of them.  However, this chieftain obviously didn't achieve his position solely for his good looks; he and his bodyguard made short work of the ape and took enough trophies from it to score 2 victory points!

In the foreground, one of the tribal warriors tried (several times) to loot a tent.  His efforts were not only unsuccessful in finding loot, but actually angered the white men enough to give them extra Totem cards each time! 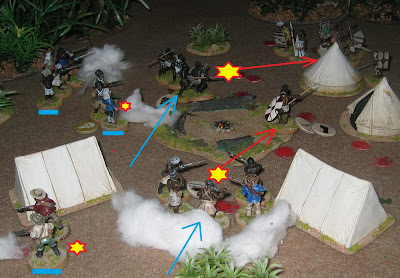 Sensing that the end was near, the expedition's native warriors and ascaris charged forwards to drive the tribesmen from the camp.  They were successful in this, but not before a few thrown spears had killed one of the white adventurers and another of the Sikh soldiers.

Meanwhile, small elements of the expedition's forces took pot shots at the sole survivor from the tribe's flank attack unit.  After all, if he could be downed then the expedition would score 2 victory points!  He proved surprisingly elusive, however. 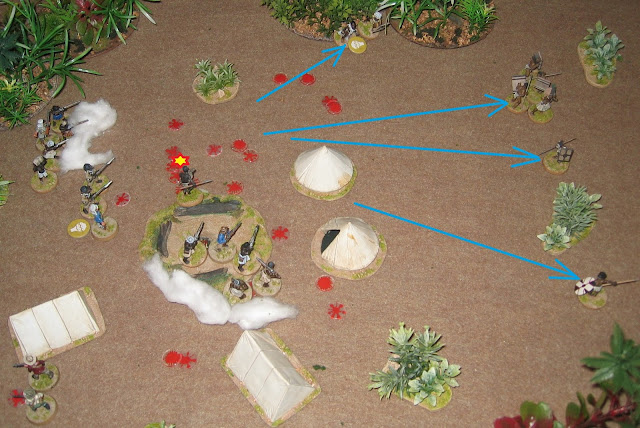 Suddenly, everything went quiet as the remaining tribesmen disengaged and took to their heels.  The campsite was a litter of bodies, broken tents and drifting smoke.

At this point, Terror attacks were used in earnest.  The expedition managed to kill the last figure remaining in each of 2 separate tribal units (so that's 4VP to the white men), but the tribe's response managed to terrify only one of the remaining two native auxiliaries.

Sensing that the game was all but over, Major Forbes and his surviving soldiers started to run for the edge of the table.  If he could escape with the crown then this would be a stunning victory. 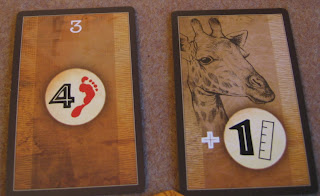 He hadn't calculated correctly, however.  The tribal champion looked to be too far away to interfere, but a melee card backed up by a giraffe (extra movement) totem card allowed the last tribal unit of any significance to catch up with the soldiers.

The ensuing melee was very one-sided; the tribesmen inflicted two casualties on the defender's three models.  Now here's a thing about Congo: a character must remain attached to a unit; he cannot operate independently.  Since there were only two soldiers left, if they had both died then Major Forbes would also have been lost.  Instead, I had to take Forbes as one of the casualties, thus leaving the last soldier to hold on to the crown.  They killed the Major!

In a moment of light relief, the tribal chieftain tried to sneak away through a thicket of trees.  One of his entourage stepped on a sleeping warthog and even though the animal fought fiercely, it was swiftly dispatched.  So, as well as gorilla bits, this guy will be bringing home the bacon tonight...

Some further skirmishing carried on in the last turn as the Professor's ascaris tried to drive off the champion's warriors for good, but this was all inconclusive (apart from protecting the last Sikh soldier who was carrying the artifact, of course).

That was a fascinating game and very enjoyable to play!  The tribesmen's initial charge was frightening, but didn't have quite enough oomf to destroy the camp, helped to no small extent by the devastating volley against their surprise flank attack.

For most of the game, we were very wary of doing anything which would attract stress tokens.  However, these are all removed at the end of each turn, so in hindsight I think that we were a bit too cautious about this.

Neither of us realised until very late in the game how hard it was to kill off the last figure of a unit (and thus score points for it) if that unit just went into hiding.  In the end, terror attacks seemed to be much more successful than shooting though even these were a bit unpredictable.

Equally, the attackers might have scored a few points for looting the camp.  They had the opportunity and did try to pillage one tent (this is potentially a very useful job for units that have been reduced too much to be risked in fighting any more), but were very unlucky in the results.

Neither side scored many victory points; the major goals relating to the crown of Aksoum were not achieved by either force.  Instead, what few points we made came from loot and destruction of enemy units:
Even though the White Men technically scored more than the Forest Tribe, the points achieved were so low that I don't think they're worth counting.  In my mind, the loss of Major Forbes redresses the balance anyway, so I think that overall I would consider the game to be a no-score draw.