HotT: Night of the Bats!

We've played more games than usual recently.  Indeed, this last Christmas/New Year holiday period has been quite busy in that respect.  The practical consequence of this is that I'm falling behind in writing my reports!

Maybe you're thinking "Why does it matter?  Does every game need to be written down for posterity?"  Well, I do wonder this myself sometimes.  Here's my thinking: I wish to describe what happened as a (hopefully) entertaining tale, but I'm also recording the scenario used, the figures available to each side and the way the terrain was set up.

These data enable me to decide what worked well, what needs improvement for the future and so on.  In addition, the historical record permits me to calculate how long it has been since we played a particular set of rules.  Finally, if such tales of glory and woe are appealing to you (the readers) as well then that's a very welcome bonus!

What I've described in the paragraph above is (I think) part of the creative process.  For miniatures-based games, that is a large part of the hobby, for me at least.  This introspection helps me to understand what I'm doing and why I'm doing it.

Note that I do not attempt to document board or card games such as "Race for the Galaxy", "Cluedo" or the like.  These aren't in the same category as miniatures; board & card games are fully-formed in themselves and have no creative input from me.

On with tonight's report!

Night of the Bats! 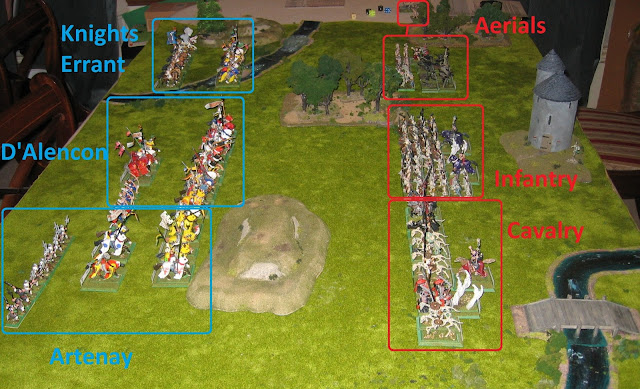 Our visitors (Steve and his son) had enjoyed our last game of Hordes of the Things so much that we decided to play another.  This was a straight-up fight between the Knights of Lyonesse and the Cabal of the Black Hand - Necromancers and their undead servants.  Each side had 3 x 24AP "armies", so this was definitely a big battle variant of HotT.

The Knights of Lyonesse

All 3 brigades were very similar in composition, dominated by Knights (strangely enough) and with a significant scattering of Heroes, Paladins and the like.  Oh, and a few yeomen as well (Shooters, Spears or Riders), just to cheer on the better sort of people!

The Cabal of the Black Hand

The Cabal's 3 forces were quite different from each other, though all included magicians and at least a few hordes of zombies or skeletons. 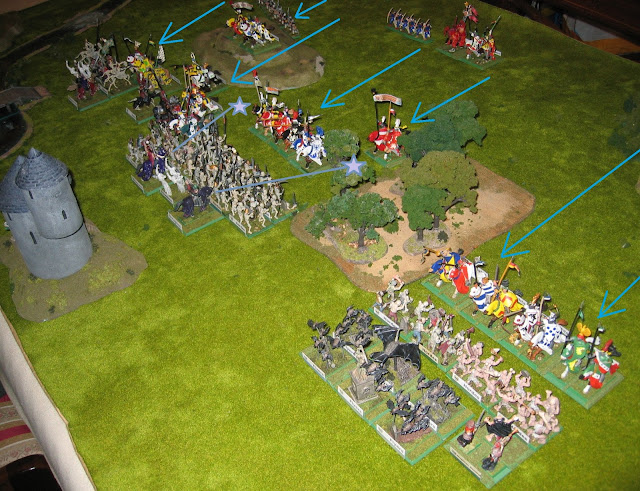 From the very beginning, the knights charged forwards, mostly leaving their infantry and lesser cavalry behind (wow - who saw that coming?).  Some sparks of evil magic disrupted their lines slightly, but this was not much of a hindrance to the impetuous chivalry. 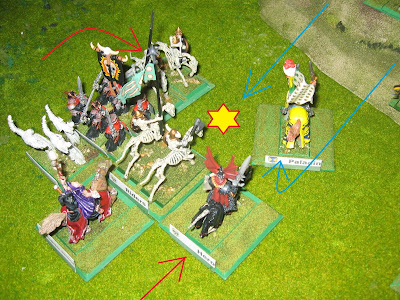 The men and woman of Artenay over-reached themselves, though.  The end of their first attacking line was flanked by undead cavalry and destroyed.  Following this, the evil Hero beat the Paladin in single combat, casing the latter to leave the table [Paladins are extremely powerful in HotT, but they take umbrage at being bested in a fight.  Rather than just giving ground and continuing to fight, as almost anyone else would do, they tend to stalk off the battlefield in shame, perhaps to seek penance at some remote monastery or to flagellate themselves for not being worthy enough].

The magicians were all delighted to see the Paladin go; the presence of Saint Florence of Artenay had a subduing effect on black magic.  Her absence should enable them to be a bit more destructive! 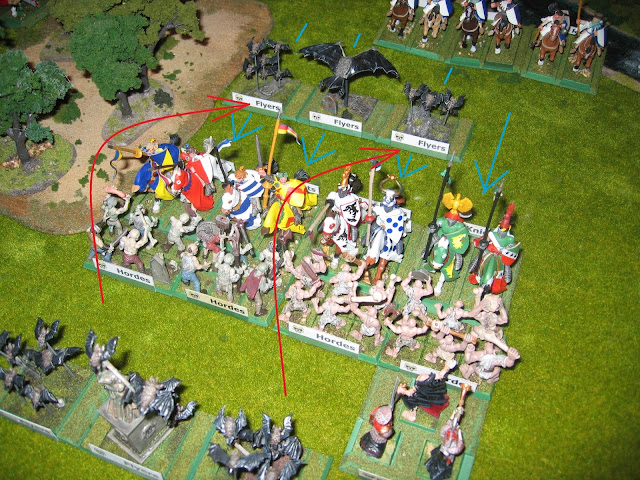 On the other flank, the Knights Errant charged forwards towards the undead Hordes.  As planned, the first line of bats leap-frogged them, thus putting themselves into position to sandwich the foolhardy men and destroy them next turn.  Still no sign of the bone dragon appearing, though.  That would have been quite useful right about now. 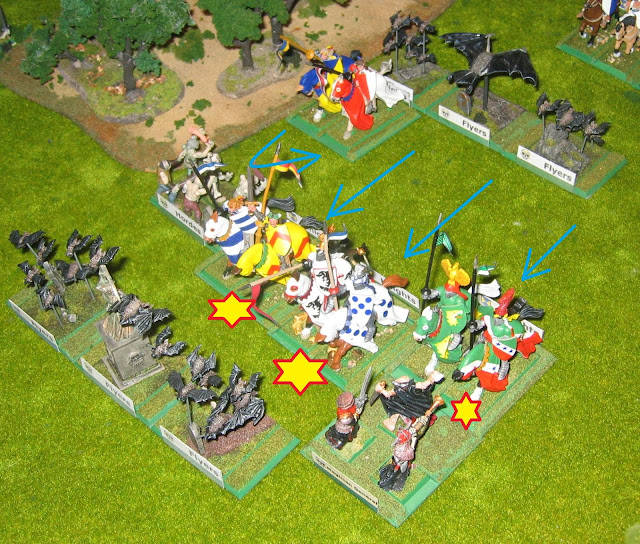 The power of the knights' thunderous assault caught the undead hordes completely by surprise, if indeed they were capable of feeling any such emotion.  Most of the ghouls and zombies were simply ridden down by the young knights, who pursued right into the magician general himself.

OK, that is something of a setback, but it's now the Necromancers' turn.  Time to roll for PiPs/command points: a '1'!  If ever there was a bad time to roll that low, this was it...

[For those readers who aren't familiar with Hordes of the Things, it costs 1 PiP to move a contiguous group of most types of models.  However, if the figures are flyers or magicians then it costs 2 PiPs instead.  With only 1 PiP available, almost all of this command couldn't move for the entire turn]. 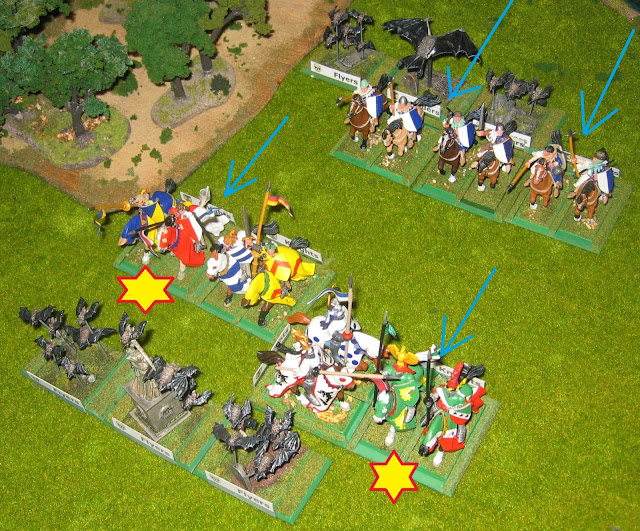 The Knights Errant took every advantage from this lapse of concentration by their enemies.  They couldn't touch the high-flying bats, but they carved their way through the Magician general and the last remaining ground troops in the Aerials command.  With their leader destroyed, the Cabal's right wing brigade became demoralised and started to slip away.  [I guess that the bone dragon won't be arriving after all...]. 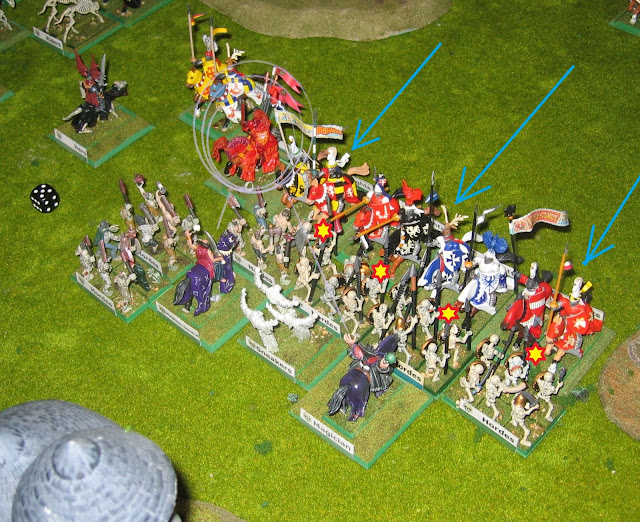 D'Alencon's forces in the centre were also making steady progress, crunching through hordes of skeletons as if they were no more than stalks of corn.  Even as they did this, a strange vortex surrounded the Red Knight.  When it ceased to shimmer, the hero had vanished, ensorcelled by the Cabalites. 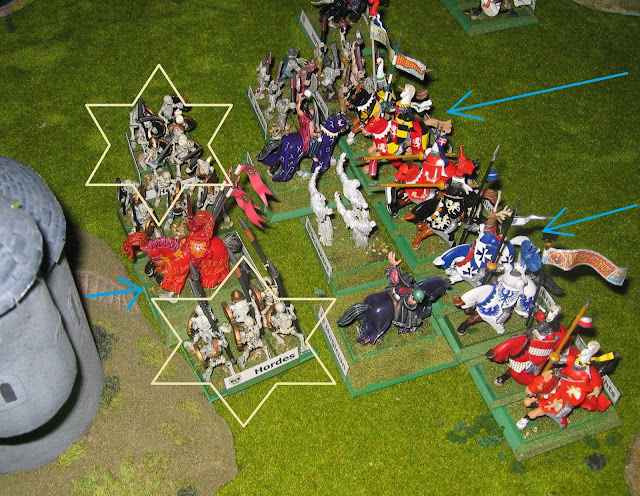 The hero didn't stay captive for long, though.  As the forces of D'Alencon continued to press forwards through the disintegrating hordes, the Red Knight burst free from his prison!

He might have chosen a better time to make his escape bid, though.  As soon as he had left the Dark Tower, the necromancers raised fresh hordes of skeletons from the ground around him.  Even the mightiest hero is in danger when surrounded. 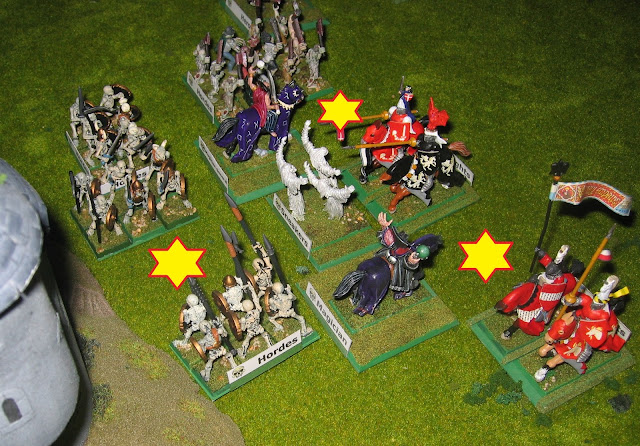 In a shattering series of combats, the brigade of D'Alencon was savaged.  Both the evil magicians zapped and obliterated their over-eager foes and the Red Knight fell beneath a mound of undead warriors.

Slightly surreal: in the centre of the battle line, the Knights couldn't beat the [supported] Ghosts.  The undead spirits couldn't affect the knights either, even though they won the fight [Sneakers cannot affect most troop types; they're really only useful against Generals].  This carried on for quite a few rounds of combat, with both sides deadlocked.  I suppose that knights just don't have enough imagination to be afraid of ghosts; they just keep on swinging their swords ineffectually at the phantasms! 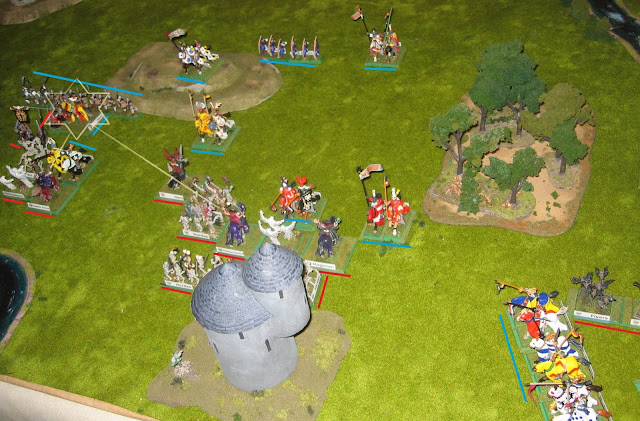 By now, most of the nice, neat starting formations had disintegrated. 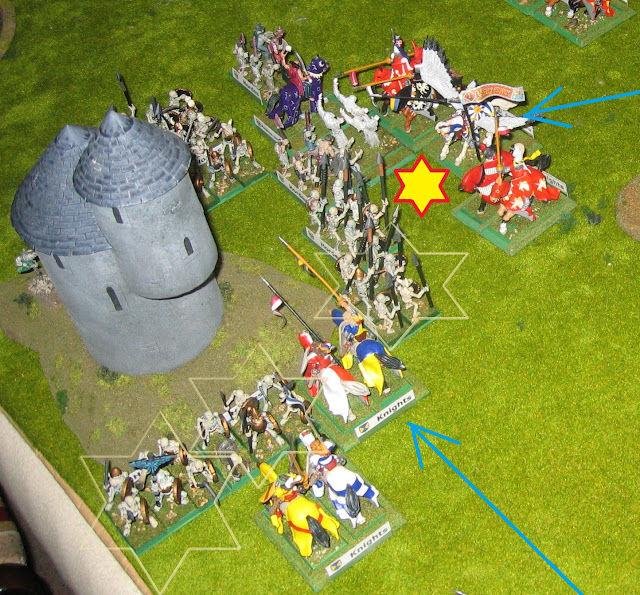 The Knights Errant charged the stronghold, but fresh skeletons clawed their way out of the ground to oppose them.  Time and time again this happened; whenever the knights retired to regroup, more enemies would appear in the spots they had just vacated.

Then, like a ray of sunshine appearing from between dark clouds, Sir Alain de Fleury swept in on his mighty winged horse.  He smote the nearest magician so hard that the necromancer was split in half down to the waist.

By now, only the only forces still fighting were the almost undamaged Knights Errant (for Lyonesse) and the very battered infantry and cavalry brigades (for the Cabal).  Either of the latter could have broken at any moment if they suffered casualties; only the continued raising of fresh skeletons - that were destroyed as fast as they came on - was keeping this force together. 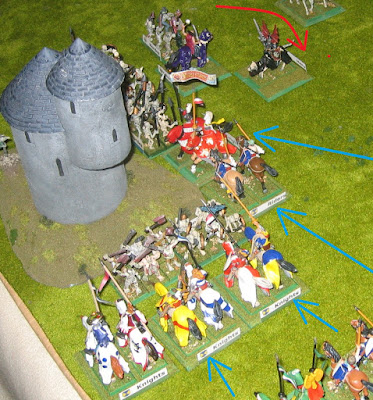 Again and again, the Knights Errant surged forwards, but they were just unable to breach the tower's walls.  Every time they fell back, more defenders would arise to take the place of the fallen.  Just how long could this go on?  Quite a few turns, it seems... 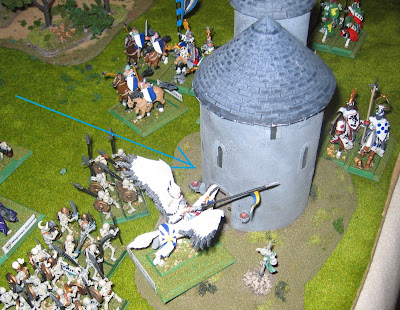 In the end, it was Sir Alain de Fleury who triumphed.  The hero and his winged steed led a further attack by the Knights Errant and the Dark Tower fell, its defences finally exhausted and overcome.  Victory (at a price) for Lyonesse!

As the leader of the defenders, I planned for the infantry and cavalry wings to hold up the attackers whilst the aerial wing obliterated its immediate opponents before using its incredible mobility to attack the remaining forces of Lyonesse from behind.  It didn't quite work that way, though, did it?  So, my bats and dragon refused to engage and the knights stomped all over my ghouls, whilst the terrified necromancer just stood and watched!  Bah, humbug!

Oh, well.  It was a well-deserved victory for the good guys.  We gave them a run for their money, I think.  The first two brigades of Lyonesse were pretty much stopped dead in their tracks, although the middle one very nearly reached the defender's stronghold.

And there's also this: as the knights went through the tower's innumerable chambers and rooms, they came to one that was far from sunlight and fresh air.  Huddled in a corner was what the victors at first took to be a pile of rags, but which turned out on closer inspection to be a person.  He flinched from lights and shrank from human touch; his speech was slurred and broken.  In all ways, the man seemed a shadow; barely a remnant of a human being.  It took the rescuers a long time to realise that this husk was all that was left of the captive hero, Roger the Castellan...
Posted by Colgar6 at 21:55