I'm supposed to be writing up a battle report for my first game of Congo, but it's taking too long.  Battle reports are a lot more work to prepare than other types of blog article!

In the meantime, here's a model for Super Dungeon Explore that I completed a few weeks ago.  I've been meaning to show it ever since then, but just haven't got round to it.  Oh, well, this one won't take long to publish... 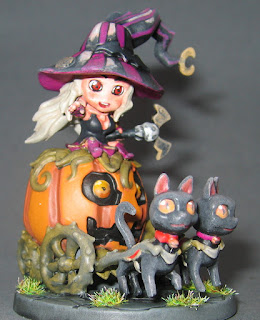 Beatrix the Witch Queen is a boss-level villain, sold as a separate expansion for the Super Dungeon Explore board game.  She comes with 6 little ghosts that are used in the game as a form of Creep; they're not deployed alongside her and consequently I've not bothered to show them this time. 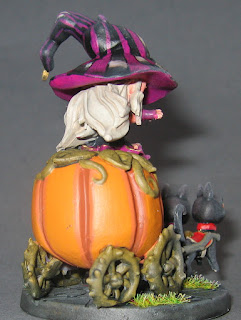 Beatrix rides on top of a wheeled pumpkin that is drawn by two black cats.  I think that the camera flash has picked up something strange in the cats' paint, because they appear to be medium grey in some of these pictures.  In real life, they are much darker than that. 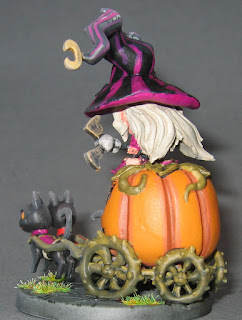 This is quite a large model; it's a puzzle to me how the designer managed to fit so much onto a standard, large-sized SDE base.  Some of the nooks and crannies were quite hard to reach with a paintbrush, especially around the underside of the pumpkin. 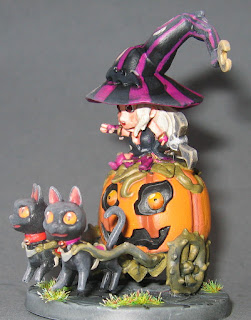 I would prefer my models to come unassembled, but these more recent SDE pieces are glued together and "ready to play" out of the packet.  That can lead to some strangeness, such as the cats' feet not touching the ground.  I did consider trying to glue them down (using clamps), but in the end I decided that the tension on the model would be too great and something would probably break if I did that.  in the end, I decided that the witch's magic probably allows the cats to fly through the air!

So, Congo next time, OK?