I've been putting off this article for nearly a month now; battle reports are a lot of effort.  Still, I promised a description of our last, one-off All Things Zombie game and so here it is... 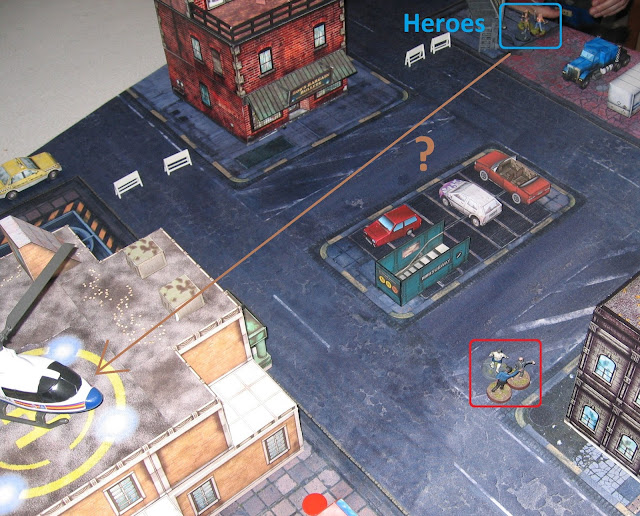 I decided, at short notice, that this game would involve a race for safety.  Mark, Will and Barbara have spotted a helicopter parked on top of a police station several blocks away.  They'd really like to leave the zombie-infested city - but will the chopper pick them up?  Will the pilot (if indeed he or she is still alive) carry them away?

Without telling the players, I chose a 10-turn limit for the helicopter.  On the 11th turn, it would try to stat its engine, just as a car would (and making noise like any other vehicle).  On the turn after the rotors are spinning, it will depart, whether or not the players have made it that far.  The pilot is just performing some reconnaissance and, whilst not hostile to a request for a lift, isn't aware that there are (live) people in the area.

10 turns is tight, but doable.  With a REP5 leader, the party should activate on 8 or 9 of the 10 turns.  It should only take 3 or 4 turns to cross the square and another 3 or 4 to work their way upstairs once inside the police station.  So, no dawdling then!  Of course, the players don't know about the time limit... 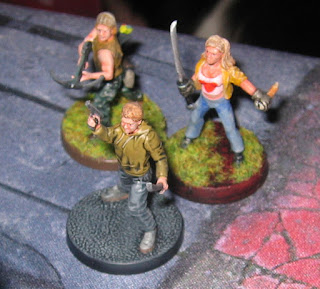 Today's victims survivors are as follows: 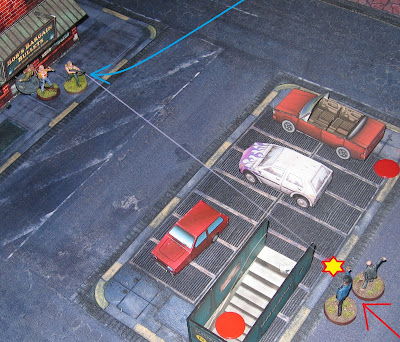 All started reasonably well, as Mark, Will and Barbara ran along the pavement.  Will even paused to shoot a zombie at long range with his crossbow. 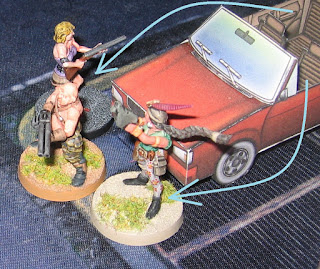 On hearing the noise, there was movement in the open-top car and 3 people clambered out.  [In other words, a PEF was revealed as civilians].  Jade, Curly and Jenny had been hiding from the zombies and hoping not to be noticed, but the near approach of the moaning undead had spooked them: 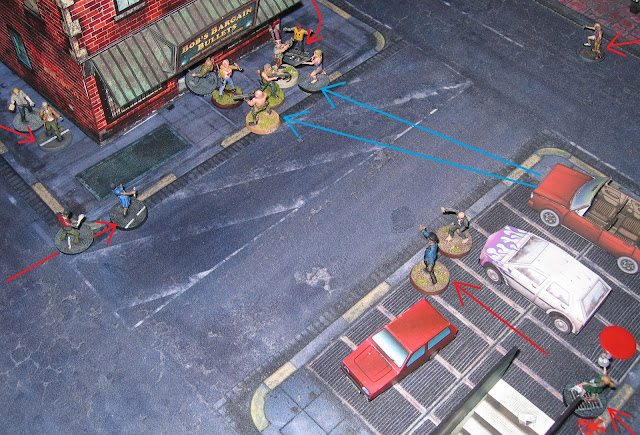 The newcomers immediately ran over to the players, begging them for help [the players won the talk very decisively!].  Mark was a bit distracted by trying to break in to the gun shop [naughty!] and didn't immediately appreciate just how many zombies had seen the movement and were now converging on the strengthened party. 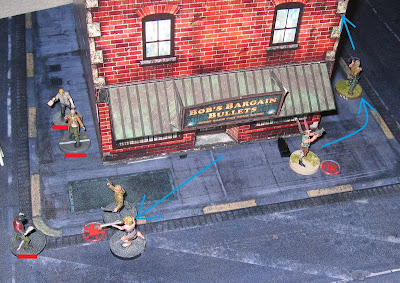 OK, keep your heads.  Don't panic and scatter like startled bunnies.  Ah, heck!  Mark and Jenny ran forwards, towards the police station.  Barbara raced back round to the other side of the gun store as if all the hounds of hell were after her.  Curly and Will followed her more slowly, leaving a startled Jade all on her own. 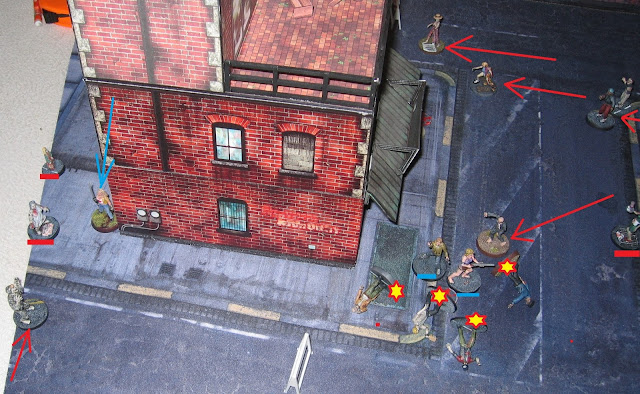 So, here's the situation a turn or two later: 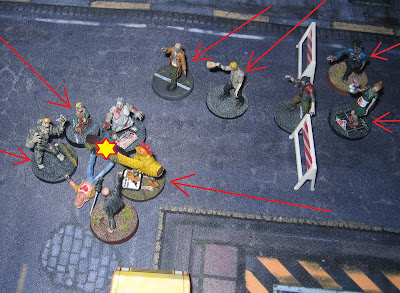 For a moment, it looked as if Barbara might be clear and away.  Only for a moment, mind: she was caught by a fat zombie in a dirty nightdress and couldn't escape from her clutches.  Before she could even scream for help, the pack was upon her, tearing the poor girl apart and feasting on her remains. 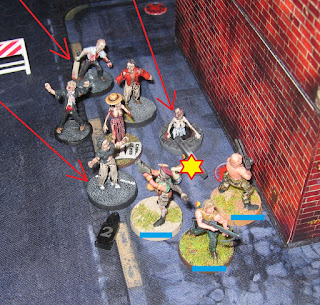 Jade wasn't having a good day.  No sooner had she caught up with the boys and mouthed off at them for leaving her in the lurch than they were beset by the trailing zombies.  She and Curly fought off the first pair, but there were more lurchers coming. 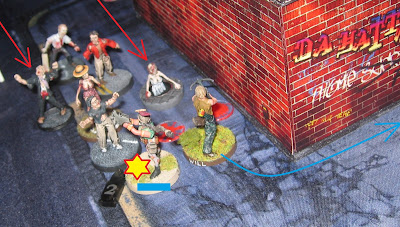 One of the zombies grabbed Jade, just as Curly and Will turned and fled round the corner.  She couldn't break the cold grasp of the creature; with the odds against her she died cursing and screaming. 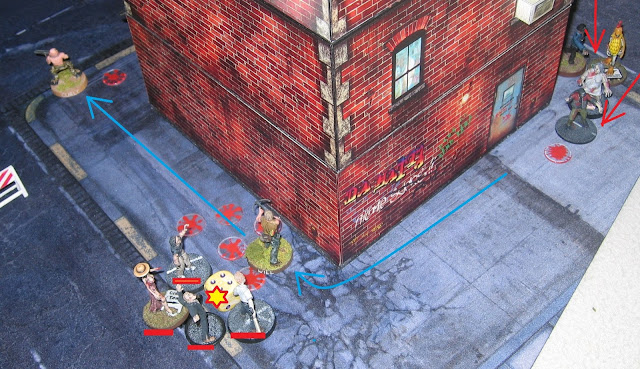 The guys didn't do a whole lot better, though.  Their way was cut off by the zombie pack which had just finished feasting on Barbara, so they turned and fled.  Fortunately for them, Jade's body was still attracting all the attention of the original group of zombies, so Curly ran and Will hobbled past them in safety.  Both men fled off the board into the city, to an unknown fate. 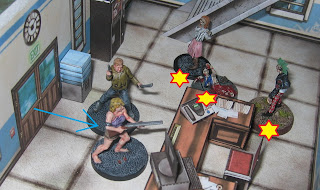 Jenny seemed welded to Mark now; even though she was only a REP 3 civilian she was sticking with him like glue!  The pair shook off the zombies in the square and burst through the front doors of the police station.  There were more zombies inside, but these were destroyed with very little effort. 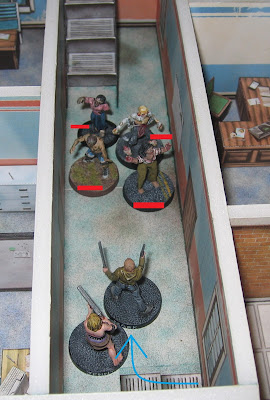 "Hurry!  Up the stairs!" called Mark.  The pair charged onwards, only to be confronted by another pack of monsters.  Truly this place was infested with them! 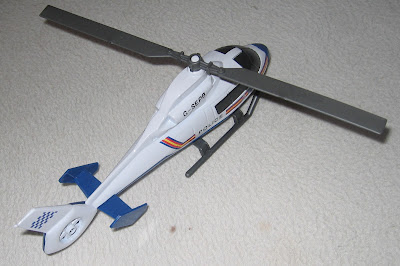 At that moment, there was a noise from the roof.  Before Mark and Jenny could disentangle themselves from the latest set of zombies, the helicopter's engine whined and burst into life.  It paused for a moment, then took off and was soon lost to sight in the clouds.  Had the pilot been frightened off by zombies?  Or maybe he/she had just finished their business and departed without even noticing the survivors?  We'll never know... 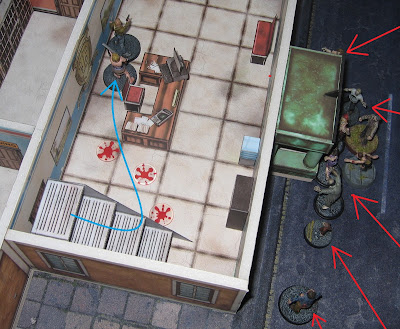 Hearing the helicopter departing, Mark and Jenny knew that they were in trouble.  There was no rescue - and the noise of the aircraft had attracted a lot of zombies.  They didn't bother to run onto the roof [to shout and shake their fists at the injustice of the universe?] but rather doubled back, down the stairs and into the lobby.  The pair could see through the front windows that many zeds were approaching so they looked for another way out. 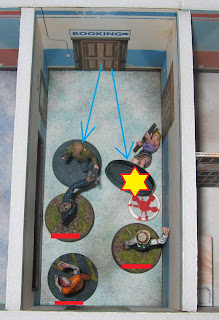 The back corridor past the line-up room was also full of zombies.  Jenny followed Mark's lead and charged into combat, but this time she wasn't successful.  Her opponent bit her shoulder and then fell on top of her, so that she smothered to death. 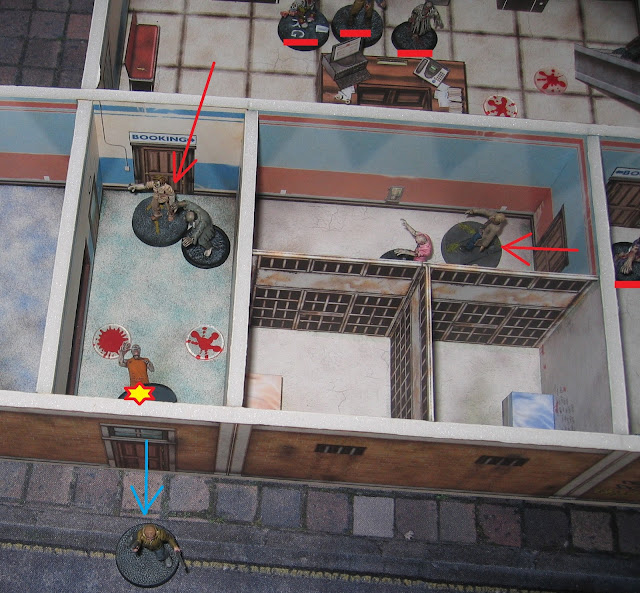 There was nothing that Mark could do to save his companion.  He did manage to take revenge on the remaining zombies, killing two and knocking the other one down.  Once his route was clear, he didn't hesitate in running through the back door and away - just as more zombies came pouring into the building in search of him.

Well, 3 humans started the mission and 3 finished it - just not the same ones.  Oddly, it was the 3 guys who survived and the 3 women who didn't, though they were evenly mixed in abilities and equipment.

Was it a failure?  Realistically, the helicopter was going to be hard to catch (and wouldn't have been able to carry all 6 passengers anyway), so I wouldn't fault the players for not making the rendezvous.  However, the loss of 50% of the party cannot really be anything other than a disaster!