A few months ago, I showed some factions for Relic Knights (an Anime-styled skirmish game, made by Soda Pop Miniatures/Ninja Division):
This week, I have finally completed my third (and, so far, my largest) faction: Cerci Speed Circuit.  These women - they are almost all women - are from a planet devoted to racing, gambling and other reckless activities.  "Live fast and die young" is a motto that could have been invented for them! 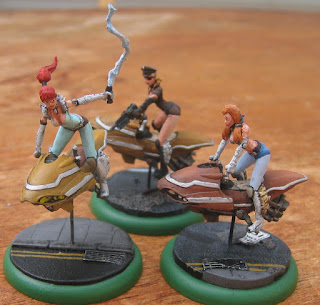 Hell's Belles are a street gang of young women who ride fast jet-bikes.  If you can imagine a cross between a slightly more grown up version of St. Trinians schoolgirls crossed with the outlaws from Mad Max then you wouldn't be too far wrong! 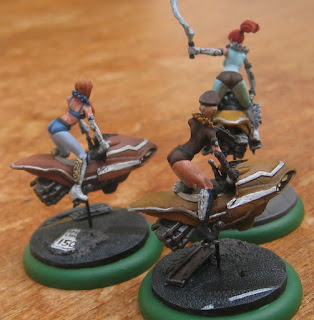 Note that there are only 2 poses amongst the plastic bodies for this set.  Also note that the sculpting on them is not the best; detail is a bit soft, especially around the faces.   I've made a number of minor conversions to make all the models look different.  Several of the figures have had caps or helmets added, or even have an entirely different head from my spares box (Crooked Dice's "Daredevil Sisters" donated the redhead with the two pigtails). 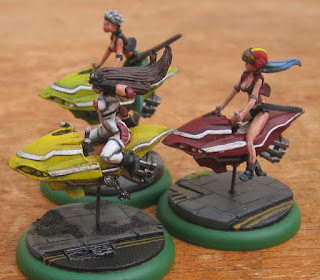 Note that due to a packaging error, there are only 2 bodies in many of the early "Hell's Belles" box sets, even though there are (as intended) 3 bikes, 3 heads and 3 sets of arms.  I was fortunate enough to have my eBay seller supply one extra body, but that still meant I was one short to fit all the models.  I eMailed the manufacturer, who very kindly sent me a replacement body free of charge.

This new figure was a metal casting, quite unlike the five plastic ones - she's the one in the white costume on the leading bike in the picture above.  Although some cutting was necessary to make her fit the bike, this figure is cleanly cast and overall a much better model than the plastic ones. 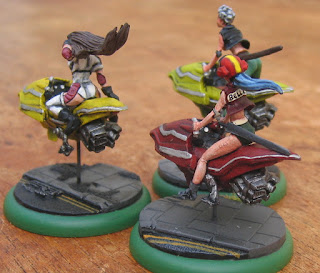 As for painting, this was an opportunity to go wild!  Bright and varied is the order of the day, so there are plenty of reds and yellows, as well as some distinctly unnatural hair colours.  Mind you, Cerci must be a very warm planet, I think - there is a lot of bare skin present, though in some cases I painted this as tights or body suits.


The leader of the Hell's Belles is a reckless show-off known as "Suicide Queen".  She rides a souped-up jet bike and is known for stunt driving and trick shooting.  Personally, I can't see her lasting very long...

[Addendum: Suicide Queen is a Questing Knight with pseudo-Jedi mystical powers and as such has a cypher (a sort of familiar).  In this case, her cypher is a small, brown, dog-like creature called "Rollo".  I have painted that model, but have forgotten to take a picture of him and therefore cannot show him alongside her]. 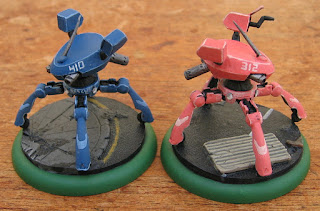 As might be expected for a speed-obsessed planet, Cerci operates a number of rescue 'bots.  These sentient machines are called "Pacers".  Apparently they are obsessive fans who will douse your burning machine with fire-suppressant foam whilst quoting race statistics at you...

At first, Rin Farrah appears out of place here; she's an assassin with a very long sniper rifle.  What's that got to do with racing?  Not a lot, perhaps - but it probably has a lot to do with gambling/crime syndicates and failed bets.  Don't welch on your debts or we'll send round the hit woman!

The barrel of this model's gun is very thin indeed.  I did consider replacing the slightly-warped plastic with a length of brass rod, but in the end I decided that it would be quite a lot of trouble to do this.  I can always revisit the decision in future, if the gun barrel bends or breaks. 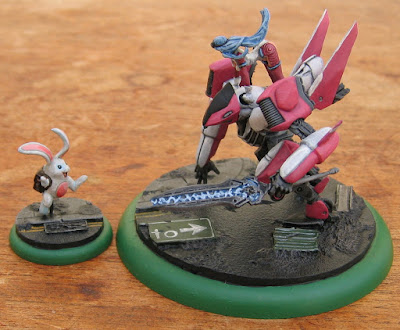 Princess Malya is a Relic Knight, which means that she has powerful psionic powers and has earned a big, stompy robot.  In this case, her robot/mech looks sleek, fast and colourful, as befits a style & race-obsessed faction. 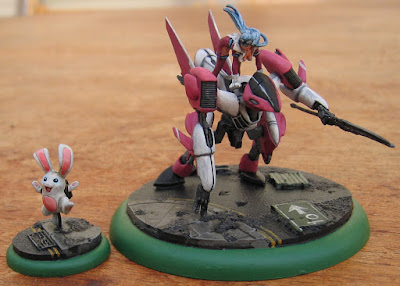 Of course, Princess Malya also has a cypher.  Her familiar is an innocent-looking rabbit thing called "Mr. Tomn".  He's probably not quite as naive as he appears...

I'm mildly annoyed to find that as well as "Rollo" (mentioned above), I've omitted another couple of figures: the Relic Knight "Marie-Claude" and her cypher "Esmee".  I must have forgotten to photograph them at the same time as the other models and at this time of year it's now too dark to take decent pictures.  Maybe I should set up a proper lighting booth; that would allow me to take photos without relying on midday sunlight?

Collectively, the 1st edition Speed Circuit models are not all the greatest sculpts ever.  They are cast in a strange "resin/plastic" material which loses a lot of fine detail and it can be hard to fit the parts together.  However, I think that with some care and attention they have painted up fairly well.  So far, they're my favourite faction for Relic Knights!
Posted by Colgar6 at 17:44