On the last Thursday bar one at the HAHA club meeting, I introduced Joe to the delights of Pulp Alley.  He had put together a league using figures of his own from some Necromunda models; I decided to field Stahlhelm's Nazi Doom Squad to meet them.  The story goes something like this:

It's 1943 and the Second World War is in full swing.  Professor Petersen, the renowned Danish physicist, is working on something that has the potential to change the course of the war.  His research project is so secret that he's being protected in a British army camp somewhere in one of the more remote parts of the British Isles.

However, despite being top secret, rumours have reached the ears of eager listeners.  In this case, the Nazi unconventional warfare "Doom Squad" on the one hand and a group of time-travelling mercenaries on the other (I'll call them "Mundans", since I don't know this league's official title).  Both groups have infiltrated the base and would like to get their hands on the good professor to find out all about his research. 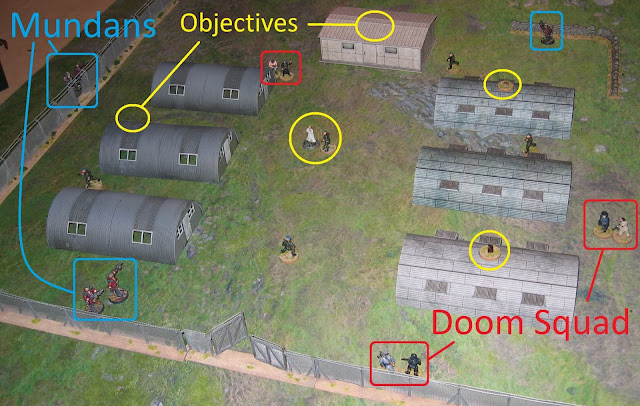 This is a standard, 5-plot point scenario, as described in the base Pulp Alley rules.

Plot points are as follows:

We placed 5 blue-beret guards around the base.  These had the following rules: 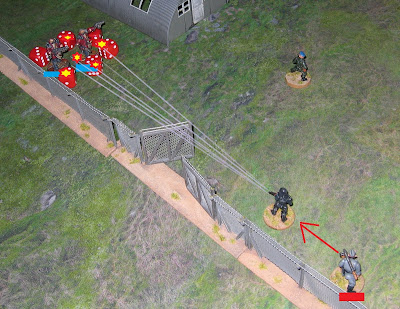 Immediately the game started, Panzerbot 5 strode forward and opened fire on the nearest two Mundans [annoyingly, I had forgotten to bring my blast templates and so we had to use a ring of dice to mark the dangerous area].  Sadly for the Doom Squad, the hail of bullets had no effect whatsoever - maybe the robot's targeting systems were confused in the dark? 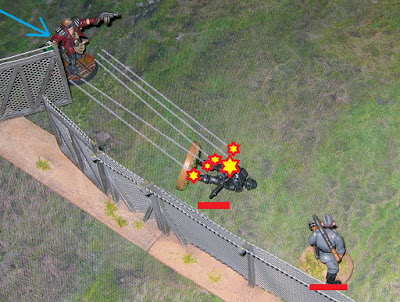 In return, Two Gun stormed towards his assailant and unleashed a devastating fusilade; the Nazi machine was quickly reduced to a smouldering heap of junk.  [If I remember correctly, Tommy Two Gun had a combination of abilities which allowed him a shoot stat of 7d6 at close range; this is a staggeringly high number of shots for Pulp Alley, though at least a d6 shot isn't all that accurate...]

Ernst was next to feel the wrath of the Mundan.  The grenadier threw bombs towards the tall mercenary, but these had no effect and this Nazi also suffered a devastating volley from the twin pistols.

In the nearby hut, all was not going so well for the Mundans.  Tony rushed in to try to retrieve the camp radio, only to be felled by a lucky shot from Johann, who had beaten him to the objective.  Despite being a mere follower [i.e. a level-1 character with virtually no skills], Johann eventually figured out the radio plot point and ran off with it into the darkness without being stopped by either a Mundan or a camp guard. 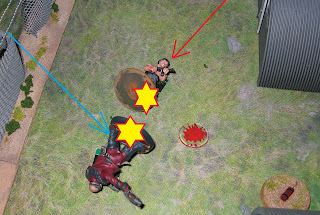 At the west side of the camp, "Baldy" Murdoch cut a hole in the perimeter fence and clambered through it.  He hadn't reckoned with Kurt, however; the Nazi bruiser bumped into the Mundan in the dark.  Both adversaries grappled and fought each other to a standstill, leaving the dynamite plot point unclaimed [at least, for now]. 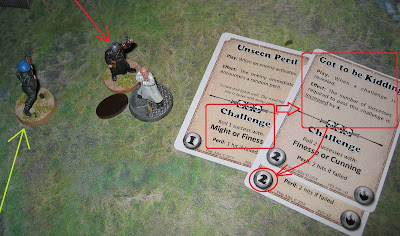 Stahl Helm approached the Danish Scientist in the middle of the table.  Initially, it looked as if solving this plot point would be simple as it required a mere 1 success against Might or Finesse [neither of which would be especially hard for the Nazi Leader].  However, a cunningly-played Mundan "Got to be Kidding" card increased the requirement to 3 successes.  It seems that Professor Pedersen was more than a bit suspicious of the German's motives...

To make matters worse, one of the camp guards chose that moment to wander past; it was all Stahl Helm could do to bluff his way out of the situation. 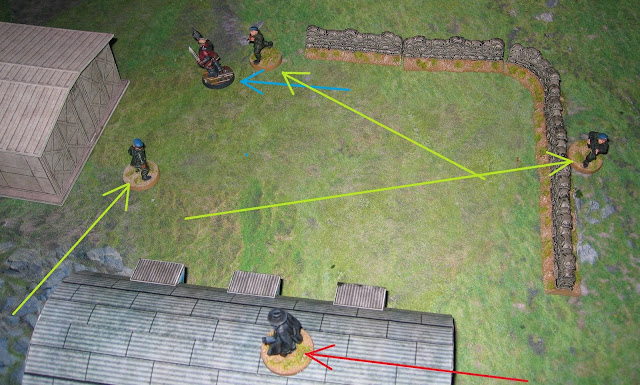 At the other end of the table, Mack the Knife tried to creep stealthily to the back of the armoury.  However, he must have been doing something wrong [aftershave too strong?] as the blue caps were combing the area very intently [it's just random movement, but it really did look as if the guards were hunting for poor Mack; they were all over the place!].

This left the way clear for Herr Stengel to ransack the professor's quarters and come away with his journal [i.e. an easily-claimed minor objective]. 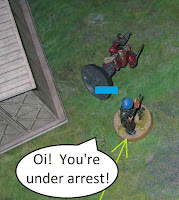 Mack's efforts at being stealthy had taken him almost to the back door of the armoury before one of the camp's soldiers finally stumbled over him.  The soldier immediately arrested the intruder and marched him off to the guard house. 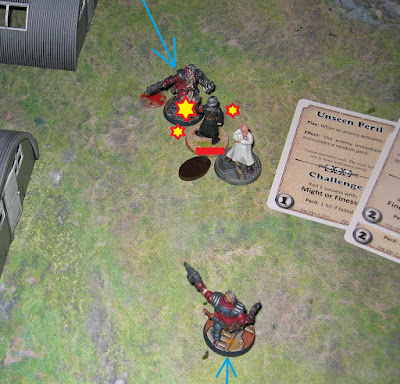 In the centre of the camp, Stahl Helm was still trying to coerce the reluctant Danish professor when he was rushed by a couple of huge Mundans.  "Hands" Gruber pounced on him from the north, whilst Tommy "Two Guns" approached from the south. 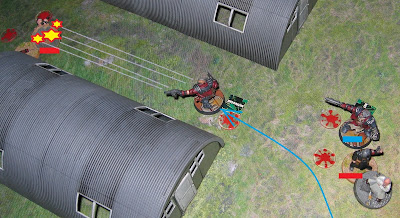 Between the huts, Kurt finally recovered from his brawl with the Mundan near the broken fence.  The dazed German managed to pick up the dynamite, but Two Guns didn't let him hold it for long.  The Mundan unleashed another volley of shots and this was enough to knock the Nazi out again (incidentally, causing him to drop the dynamite objective).

Meanwhile, Stahl Helm had beaten "Hands" down for long enough to give him time to convince the professor - but before he could go anywhere his Mundan adversary was back up and at him! 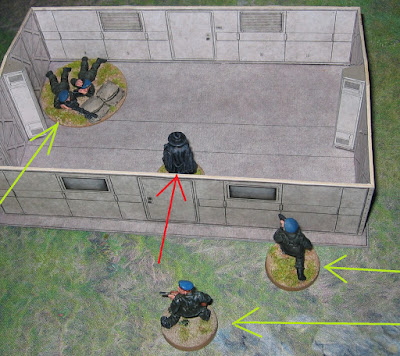 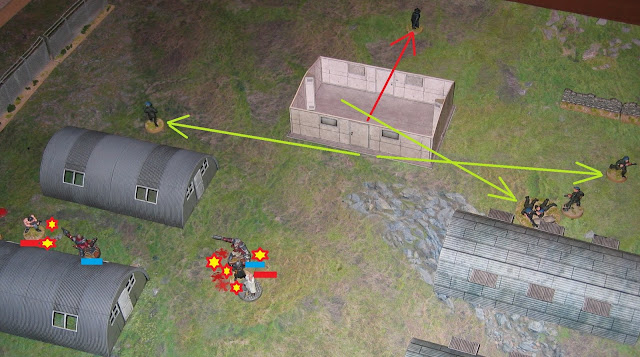 The smooth-talking Nazi managed to befuddle and misdirect all of the squaddies, though.  He made his escape off the table to the north, leaving his boss to fend for himself [after all, Herr Stengel had collected two minor objectives by this point; he didn't want to risk losing them]. 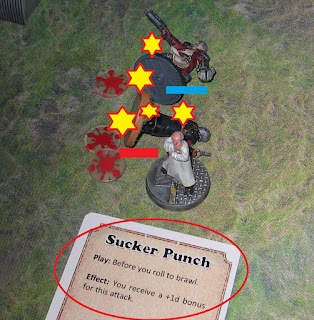 Stahl Helm and "Hands" Gruber continued to fight over possession of the scientist, who was distinctly unimpressed by the tussle.  Indeed, the two petitioners punched each other's lights out and lay on the ground, dazed and staring up at the nighttime stars.


Seeing an opportunity, "Two Gun" tried to sidle up to the professor.  However, a recovered Kurt was having none of it: his thunderous charge and the subsequent collision led to both parties being floored! 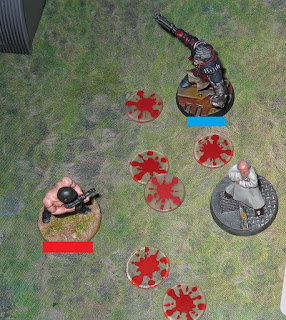 As the game ended, Kurt and "Hands" both managed to stagger back on to their feet - but it was too late to achieve anything.  With the camp thoroughly aroused and with their heads ringing, it was all they could do to drag their respective colleagues to safety before a fresh influx of guards discovered and arrested them.

So, the final score is this:
Therefore, the Nazis have officially won the game!  Against this, no-one managed to spirit Professor Pedersen away, so any sense of victory is distinctly hollow.

I don't think I've ever seen a game before where all of the characters were knocked out at the same time, though admittedly two Nazis had run away off table and so maybe this doesn't really count.  Certainly the boss-fight over the Danish academic was one in which neither side was prepared to give an inch; consequently no-one got the major prize.

I imagine that both leagues are now licking their wounds and wondering what is the best next step towards fulfilling their ambitions - whatever those are!