Well, we're into the third week of Zomtober 2018.  I've presented a zombie/survivor duel on each such occasion since 2013 and I'm not going to let you down this time.  Hope you enjoy this week's offering! 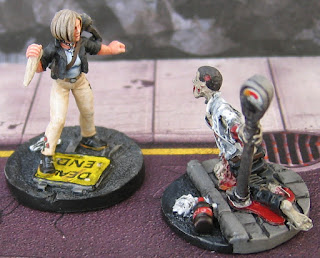 This week, I have painted a couple of oddments from my lead pile.  The survivor is a young woman made by Hasslefree Miniatures; I've called her "Sarah".  She is reasonably well dressed and has a (camouflaged) hunting crossbow slung on her back.  Oddly, she doesn't seem to have any bolts for the bow. 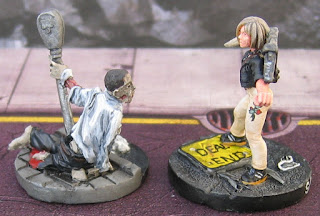 Instead, Sarah is clutching what looks like a wooden stake or tent peg (are wooden tent pegs even a thing these days?).  It's not the improvised weapon I would chose to deal with post-apocalyptic monsters!  Something with a long handle and sharp bits at the far end - perhaps a type of gardening tool - might work better... 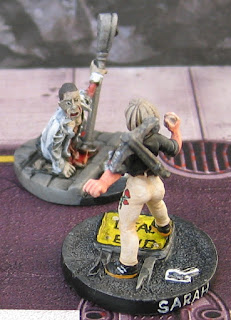 Sarah is about to attack Parking Meter Zombie (PMZ).  This zombie appears to be heavily damaged - he's missing half a leg and his belly has been ripped open.  However, he hasn't quite given up yet; he's using a parking meter that has been ripped out of the ground as a support.

PMZ is from one of Studio Miniatures's "zombie mobs".  I've mounted both figures on resin bases from Escenorama. 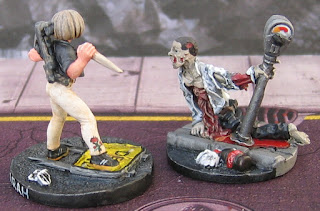 There seems little doubt in my mind that a fit young woman with a weapon - even a poor one - should be more than a match for a single, crippled zombie.  The real question must be why is she about to attack PMZ, though? 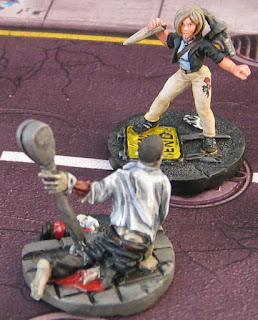 Here are some possibilities:


None of these possible reasons seem especially convincing to me.  Can you come up with anything better?