It's the first Sunday in October and that means it's Zomtober time!  I admit that I look forward to this event for much of the year.  Judging by the number of comments I get for my posts during this time I imagine that my audience also enjoy them more than my average output.

I've been putting up a duel between a zombie and a survivor every Sunday in Zomtober since 2013.  I can hardly believe it's been that long, but the evidence is here if you'd like to check for yourself: all posts labelled 'Zomtober'.  OK, enough rambling; on with this week's duel...

Luke vs The Baron 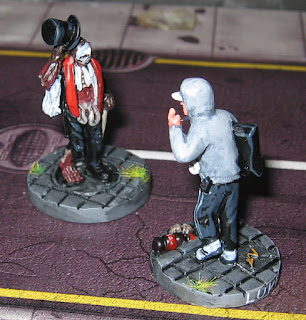 Today's survivor is a young thug called "Luke" (aka "Luke the looter").  He has decided that the most important thing to do in the apocalypse is to go out and steal a flat-screen TV.  I think that the education system has failed this lad somewhat... 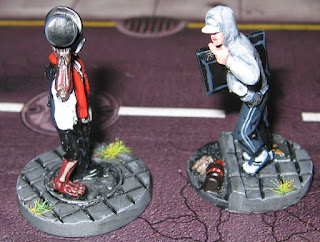 On his return from his "shopping" trip, Luke has come face to face with a zombie that I'll call "the Baron".  Why "the Baron"?  Well, he's dressed in very formal clothes, though this doesn't in itself mean that he is/was a member of the aristocracy.  He would appear to be very polite (for a zombie); he's lifting his hat as a gesture of recognition or friendship (!).  Again, this doesn't mean that he is upper class.  No, I call him "The Baron" because this zombie bears at least a passing resemblance to Baron Samedi, the supernatural Haitian voodoo master of death! 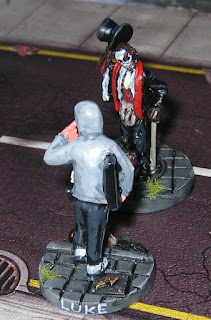 The model of The Baron was a giveaway at some wargames show a while ago - I think the tag said "Newark".  I didn't acquire it there, but rather it was a welcome extra in some eBay job lot that I bought some time.  I haven't modified the figure at all, other than to mount him on an Escenorama resin base. 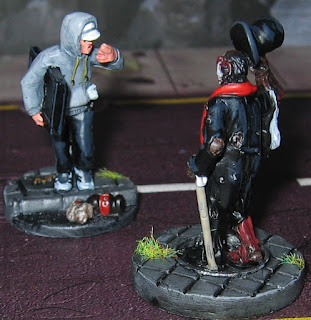 Luke comes from Offensive Miniatures' "Street Kids" pack.  I've made one tiny conversion here; I added an outstretched finger to his left hand.  Whilst it's a slightly crude modification, I think it does add an extra air of disrespect to the already uncouth youth.  Or maybe he's just picking his nose? 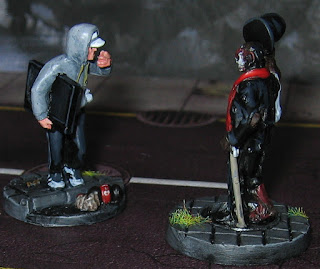 As always, the question is "what happens next?"  On the face of it, a young, fit man should be able to evade and outrun a somewhat damaged zombie, especially if he ditches his encumberance (the TV).  But what if this zombie really is Baron Samedi, or if it believes itself to be?  That might give it unusually strong powers, even if only for a short while.  And what happens if Luke isn't prepared to drop his acquisition? 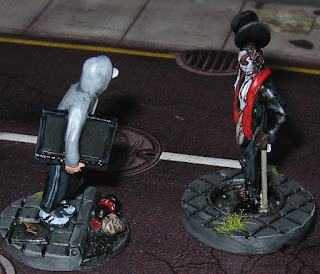 One thing's for certain: Luke is going to be disappointed when he realises that the mains electricity doesn't work any more.  Even if he is smart enough to find and hook up a generator, I imagine that not many TV stations will continue to broadcast once the apocalypse is in full swing, so the TV is essentially useless.  Luke would have been better off if he'd looted food, tools or weapons...