Our Pulp Alley "Perilous Island" campaign is gathering momentum!  It's taken quite a long time to play the first four episodes, but now we're about to reach Perilous Island itself.  I'm really excited about this (and it was another good game, as you'll see below).

For anyone who wishes to remind themselves of previous events, or who is new to this and would like to start from the beginning, here's a list of the earlier scenarios:
Now let me present to you another thrilling installment: "Lagoon of Terror!" 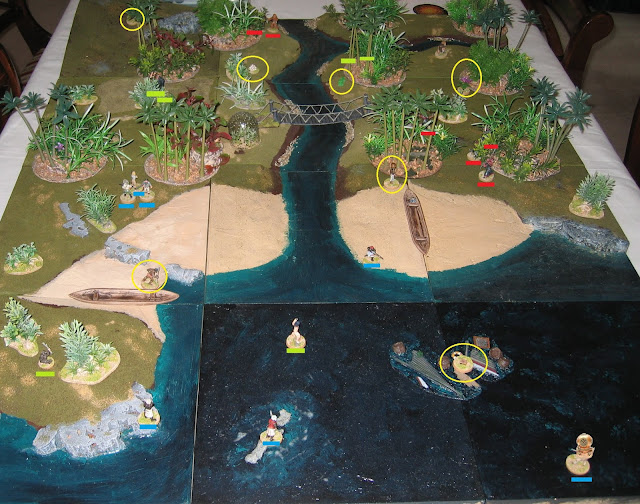 Now that the location of the mysterious Perilous Island is known, the three remaining leagues (Tarzan's jungle alliance, Sir Henry's safari and the Snake Cult of Hanash) have been racing each other to reach it first.  After a wild storm, they are all shipwrecked in the same location, or nearly so.  Those who are near the water's edge, or still in the sea, notice debris from a previous vessel.  Perhaps this was from Lord Darrow's craft?  There may be clues to his whereabouts in amongst the flotsam.

Because we had 3 players, we added a couple of extra minor plot points, neither of which had any special rules, but which gave the leagues a little bit more for which to aim.  This meant that the full set of objectives was as follows:

For perils, we had the following:

The leagues were much as before, though it's worth mentioning a couple of pre-game acquisitions: 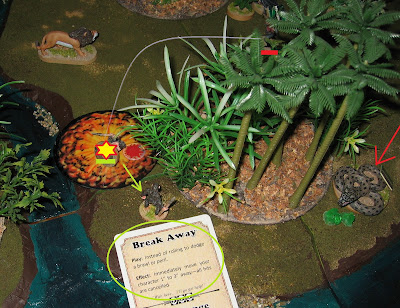 Deep in the jungle, Caesar and another simian were looking for the rest of the Jungle Alliance.  They were taken completely unawares when a mango-sized metal object flew through the trees and landed between them, hissing softly.  Caesar was deeply suspicious; he jumped aside just before the grenade exploded - but the other little ape wasn't so lucky and was knocked out.  First blood to the Cultists! 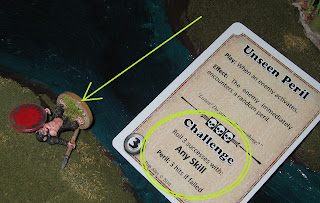 Seeing the Cult's giant snake approaching from the other direction to pick up the Perilium crystals - and remembering how badly it had gone when he encountered that monster previously - Caesar attempted to escape by swimming across the river towards his allies.  However, the water was faster and deeper than he had imagined; the little ape was swept away and never seen again (at least, not in this episode!). 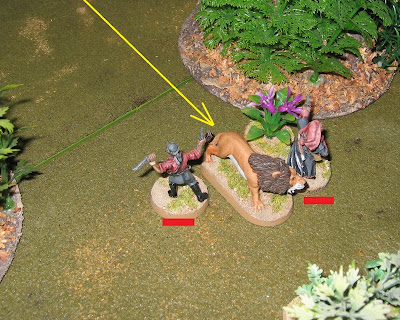 For a while, it looked as if the Cult would have the entire eastern jungle to themselves.  However, as their leader was congratulating his grenadier minion and preparing to pick a rare purple orchid, a lion strolled into the clearing.  It didn't seem especially hungry, though; initially the animal just ignored both men. 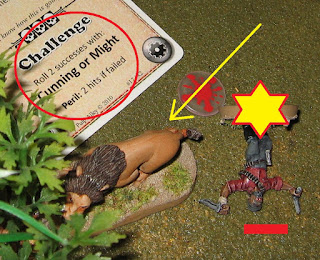 However, the beast just wouldn't go away; it wandered back and forth across the clearing, seeming to track the cultists' movements.  Eventually it turned on the minion and killed him whilst the cult leader escaped with his specimen. 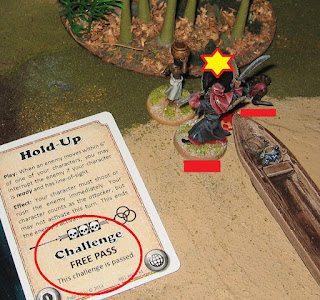 Nearer the beach, two other cultists encountered a native woman carrying a pot of papanga goo.  The Cult's wrestler spoke to her first, but in return he was smacked so hard that he was knocked out!  Who knows what he said?

The sharpshooter then approached and he was far more to the woman's taste [he drew a Free Pass for the plot challenge].

With this, the cultists on the eastern shore had acquired three plot points: the leader held the orchid, the snake had the Perilium crystals and the sharpshooter had the papanga goo [plus a female admirer, or so it seemed!].  Rather than risk their booty by seeking out fights with other leagues, they disappeared off the table and further into the jungle. 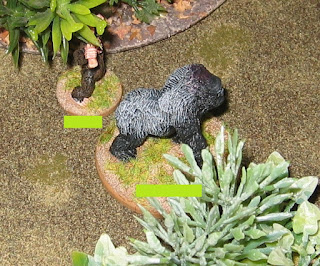 If the eastern jungle was owned by the cultists then the western part was dominated by Koko, the gorilla! 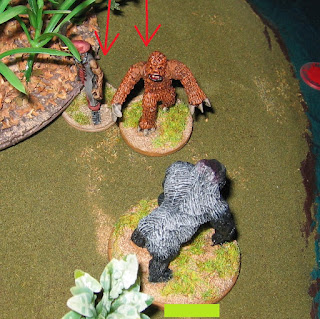 The cult's stealth expert crept up on the great ape, whilst their shambling undead approached with rather less subtlety.  The first that Koko knew of their presence was when he was hit by a bullet from close range! 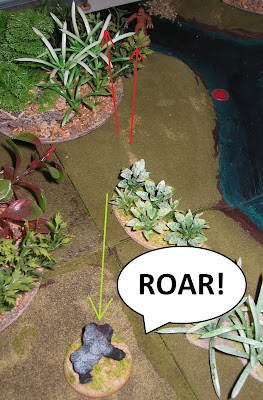 Fortunately for the gorilla, he soon recovered from this flesh wound.  Incensed and angry, Koko retreated to a more central part of the jungle [in an attempt to include more enemies in his radius of effect] and then let out a terrible, loud growl!  He jumped up and down, beat his chest and in all ways became as scary as he could [Koko has a shock attribute which can scare lower level characters]. 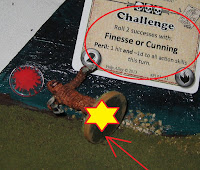 On this occasion, the results were especially gratifying.  Not only did all the cultists who heard the ape's fury retreat, but in its haste to escape the reanimated creature fell down the riverbank and disappeared into the dark, swirling waters! 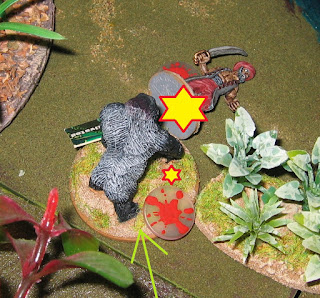 Pausing only to collect the mysterious remains plot point, Koko charged the remaining cultist and ripped his arms off. 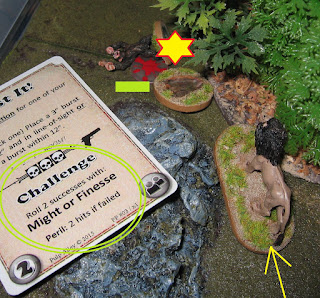 The only fly in this ointment was the sad fate of Koko's companion - one of the only two remaining simians.  He had successfully recovered the dinosaur footprint plot point and was hopping up and down with excitement at the thought of showing this discovery to the boss.  It wasn't to be, though; a lion jumped out of the undergrowth and took him - too late in the game for anyone else to reach the plot point and attempt it again. 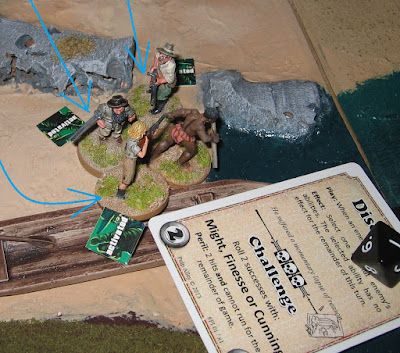 Deciding that they didn't like the look of the jungle [or maybe it was the strange sounds coming from it?], Alan Quartermain, Captain Goode and Lady Constance all descended upon the native fisherman.  The two gentlemen only had limited success in negotiating with him, but Lady Constance managed to put things right and therefore is now recognised as a friend of the Nghai tribe. 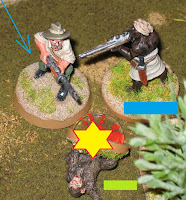 This team (or at least, Captain Goode and an ascari) then took out their remaining frustrations by beating up the last of Tarzan's poor, little simians - who had the misfortune to be nearby and alone. 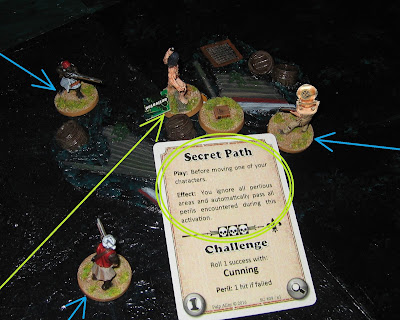 The major plot point [the journal pages in the ship's wreckage] was only contested by the Safari and the Jungle Alliance.  From the start, Tarzan was determined to claim this prize, so he used a card to swim like an Olympian, right through the debris and in between the floundering ascaris.  He had no difficulty at all in finding the papers - but could he keep hold of them? 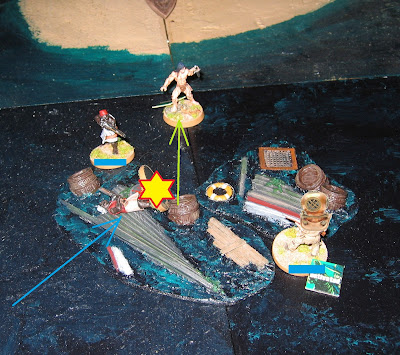 One of the ascaris tried to interfere, but Tarzan wasn't to be defeated by a mere minion like that!  He left the Safari's follower floating in the water, barely conscious, and struck out for the shore. 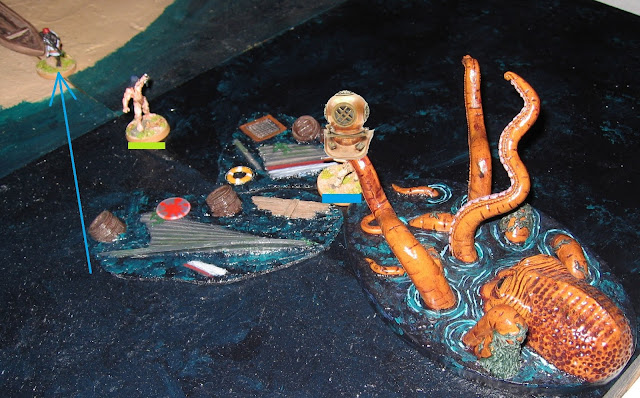 The other ascari gasped in horror and swam for the shore with all his might - not because he had seen his fellow defeated, but rather because of the awful thing which now arose from the depths of the lagoon.  A horrible monster, obviously disturbed by the humans' activity, breached the surface.  It reached for Sir Henry and wrapped the end of a tentacle around his diving suit! 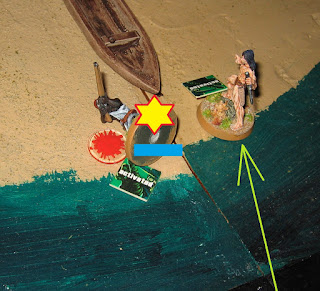 Tarzan left the water as quickly as possible, only pausing to wrestle the nearby ascari into submission.  The Safari's man hadn't been content to escape the behemoth, but had turned and taken shots at Tarzan - none of which injured him even though some of them were quite close. 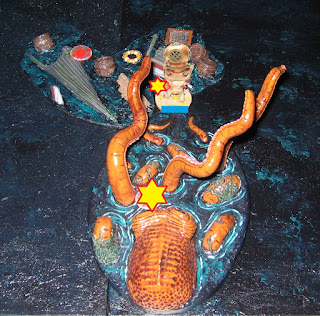 Meanwhile, what of Sir Henry?  The adventurer had little option other than to trade blows with the sea monster, but he rolled well and it rolled below average; both were injured. 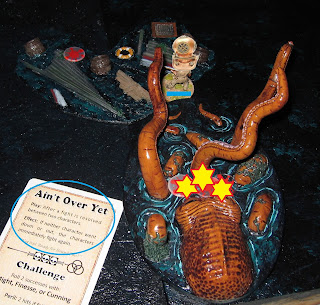 Further poor rolls by the behemoth and excellent recovery rolls by Sir Henry turned the tables strongly in his favour [he also burned through a number of cards to give him every advantage he could muster].  Even so, it looked as if this titanic battle wouldn't be resolved by the end of the game.

As no plot points were at stake, there was small value in playing out the fight at this point - apart from the kudos.  With the last exchange resolved, the monster had been reduced to just a single health point and it looked as if the battle would be inconclusive.  Then Sir Henry played an "Ain't Over Yet" card to force another round of combat. 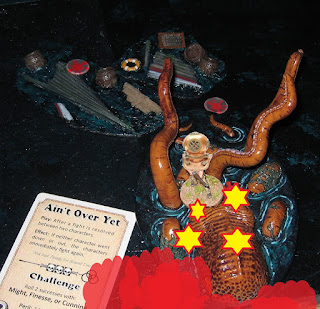 With a gasp of triumph, Sir Henry buried his harpoon deep into the creature's vitals.  The water turned red as the creature thrashed around briefly, before it stilled and sank out of sight into the murky depths.  Sir Henry was victorious, though his suit was damaged and he had taken a nasty cut to the leg as the monster died!

This was yet another thrilling game; Pulp Alley never disappoints!  Officially, the scores were as follows:
Against this, Sir Henry deserves to be awarded a whole boatload of "cool" points for deciding to purchase a diving suit, then having the machismo to face the lagoon terror and kill it!  I really wish I'd had a model of a man in a diving suit; that would have made it look so much better.

Strange, new tactics were employed in this game - especially by the Cult, though they weren't alone in this.  As soon as someone (even a leader) had acquired a plot point they would leave the table as fast as possible.  This certainly preserved their gains since no-one could take the objective from them (well, obviously), but it also meant that these characters were then unavailable for the remainder of the game.

Partly as a result of such tactics and partly because of the thick terrain, there weren't as many fights between characters as there might have been.  Instead, most of the casualties were the result of perils - though even these were relatively light compared with our last "extremely perilous" game!