Games such as Paleo Diet: Eat or be Eaten allow models to go into hiding, in order to spring out later and ambush some passing prey.  This supposes that the local geography is sufficiently covered with enough small cover that can be used for such a purpose, but I'm very happy to accept such an assumption.  After all, most real-world landscapes aren't flat and featureless. 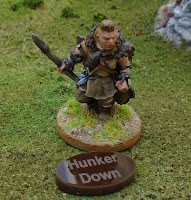 If you are anything like me then your default mechanism to mark a figure's status is to place a coloured token beside the model, or perhaps on the model's "character card", if it has one.  This has several issues, though: 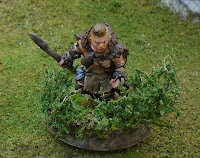 So, at almost no expense, I've been experimenting with a different way of showing that a figure is hiding in cover.  It seems obvious in hindsight: I've created some vegetation-based markers.  You really cannot see Talut the hunter hiding in the picture above, can you? 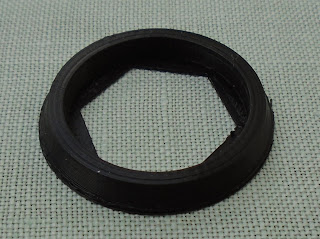 How did I create this marvel of illusion?  Well, I started with a 3D-printed "base ring".  I cannot remember for certain, but I might have bought mine here: https://protechmodels.co.uk/products/base-convertor-25mm-to-32mm-gw-sityle .  I'm sure that other makes and models exist, though do remember to check the sizing is suitable for your figures! 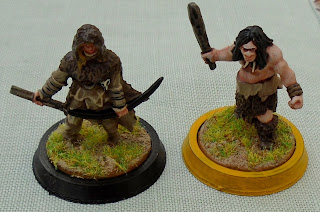 Normally these are intended to "enlarge" an existing figure without requiring it to be rebased, though the rings can also be coloured or painted and used to identify different factions.  This latter would be especially useful if you have a civil war going on, or are playing a game with novices who cannot tell that this particular soldier belongs to tribe A whilst that almost-identical figure is loyal to tribe B. 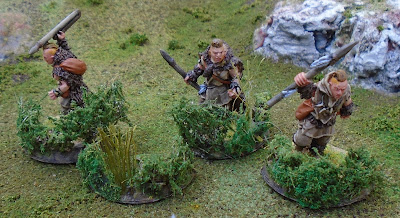 However, here's another way they can be used:

When you wish to show that a figure is lurking, just place one of these semi-circles around the  model's base.

This project may seem blindingly obvious, but I assure you it took me some time to come up with the idea.  Maybe I'm slow or something?  Once conceived, it took very little time or money to build these markers.

I suppose that the same concept could be used to create other status markers as well.  For example, I could imagine how I might design "on fire", "frozen" or "tangled" markers, if I needed them.  Mind you, I don't think these would stack very well; they wouldn't really work if your model was hiding, on fire, tangled and frozen all at the same time!