It has been nearly 2 years since the last installment of our Perilous Island campaign.  You all know why this delay has occurred: Covid 19.  Well, I'm pleased to say that things are opening back up where we live and this has permitted us to meet up again and play another episode.

For those who cannot remember anything about the campaign at all, I suggest you start at the beginning: Tarzan and the Lady.

If you just need a quick catch-up on the last episode then it is here: Blood Sacrifice!

Otherwise, continue reading here for the next part in this thrilling tale! 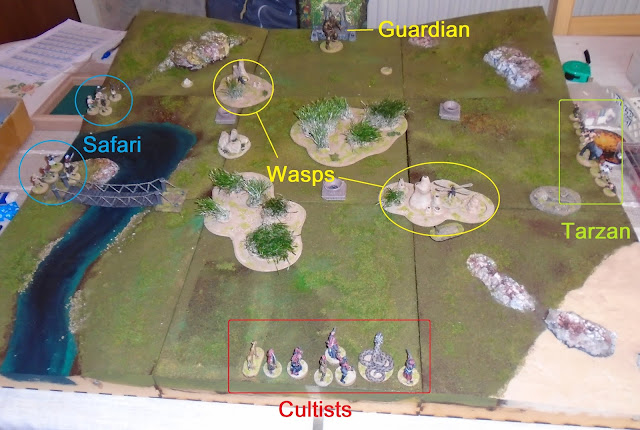 In their search for Lord Darrow (the missing archaeologist), the leagues have followed the trail of clues (or each other!) across Perilous Island.  Now they have reached the entrance to the Forbidden City - the semi-derelict city of the ancient Enocheans.

All the signs tell them that they must enter the city, but there are several problems:

In the red corner, we have Al Masudi and his giant pet snake, followed by various devotees.  Since the last game, he has spent some experience points to gain the Commander skill, which gives him even more level-2 followers.  One of these is a cheetah (Al Masudi has a fondness for exotic animals, as can be seen in several earlier episodes of this campaign), whilst the other is another marksman.

In addition to the regular crowd, the cult has obtained the services of a local Nghai hunter, just for this mission (he's the guy dressed in the red fez.  I was running out of suitable models as we were playing away from home and I hadn't anticipated the need for quite so many native models). 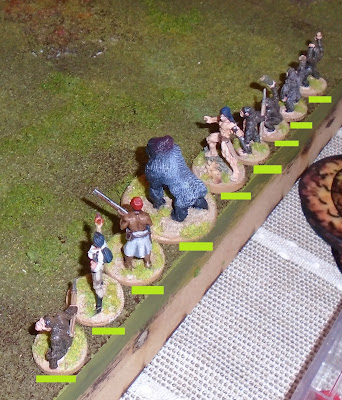 Marked by green are Tarzan, Koko the gorilla and various simians (small apes).  Again, Tarzan has expanded his roster a little by virtue of experience or reputation (I forget exactly which) and there are more simians than previously.

Tarzan also has a Nghai hunter in his party and in addition to this he has Lady Elaine Darrow, the missing archaeologist's daughter.  She seems to think that this party has the best chance of tracking down her lost father, at least for now. 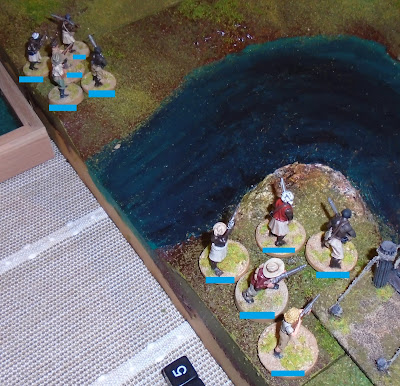 Finally, in blue, we have Sir Henry, Alain Quartermain, Captain Goode and a bunch of ascaris, plus Lady Constance (Sir Henry's niece, I believe).  As with the leagues above, Sir Henry has an extra ascari follower and he also has a Nghai hunter attached to his party.  [I was astonished to find out that all the leagues had made friends with the Nghai; they must be a very trusting tribe]. 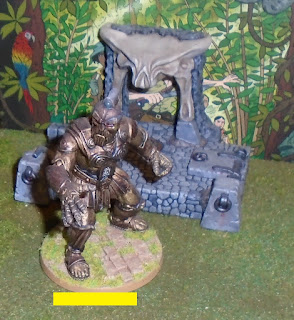 The table is set up with 2 types of danger:

Out of the initial hands dealt to 3 players, we had three "Play Immediately" cards.  This is quite unusual, though something like it has happened before in one of our other games (Swamp of Terror).  Still, it looked as if the winner of the scenario would gain some extra resources in addition to the glory of being top! 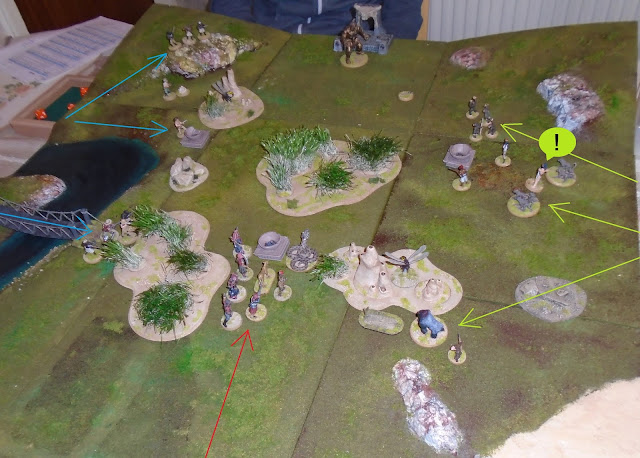 Predictably, the leagues moved towards the gate in turn 1.  There were a few variations in this, though: 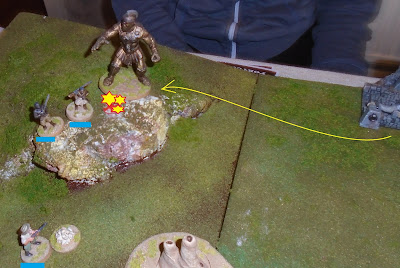 Maybe the ascaris were a bit too close to the gate, though?  The guardian rumbled over and stomped one of them into the ground.  First blood to the monster!

Another "Play Immediately" card was drawn.  The stakes were rising quite high for this game! 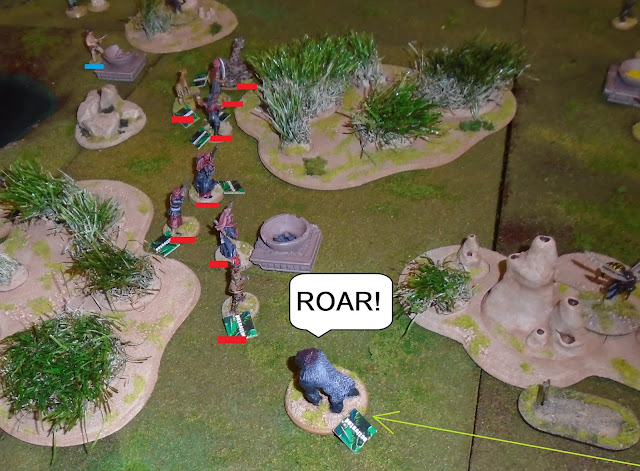 The cultists all formed a line as they marched forwards.  In a spoiling move, Koko the gorilla ran to the tail end and roared [he has the Shock skill].  This manoeuvre was intended to scare some of the lesser cult members into the farther wasp's nest at the top of the picture, where they would be stung to death.  It was partially successful in that several cultists (including their highly-strung cheetah) were indeed startled by the sudden commotion and they did all pile forwards into the wasp's nest - but the wasps failed to injure anyone.  Oh well... 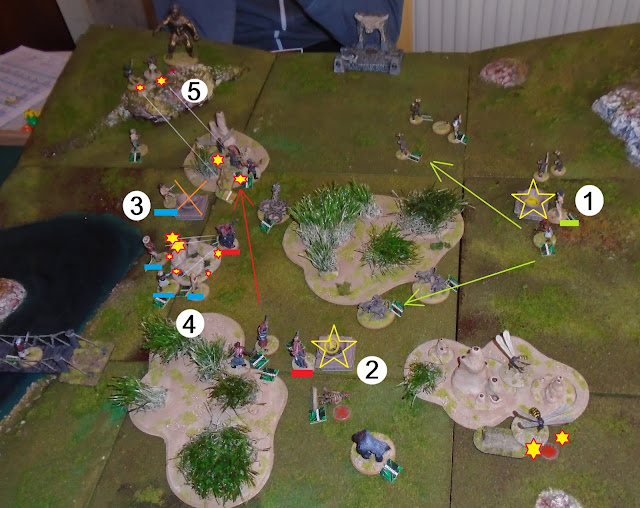 The rest of the turn played out like this: 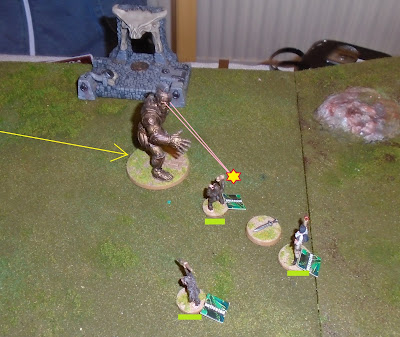 This time, the guardian strode towards Hurkey (one of Tarzan's followers).  It didn't quite reach the monkey so it shot beams of searing light at him instead.  The little animal dodged aside nimbly and avoided any harm [against the odds, mind]. 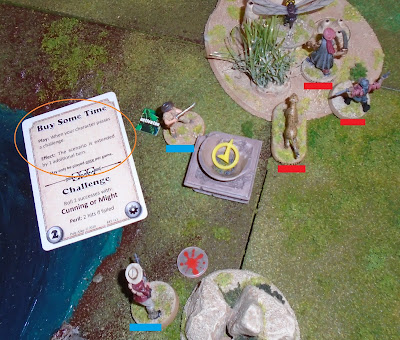 Sensing that everyone was somewhat annoyed with him for his spoiling tactics, Sir Henry quickly lit the fire at his altar.  He then played Buy Some Time to extend the scenario to 7 turns.  Well, that should be enough, right? 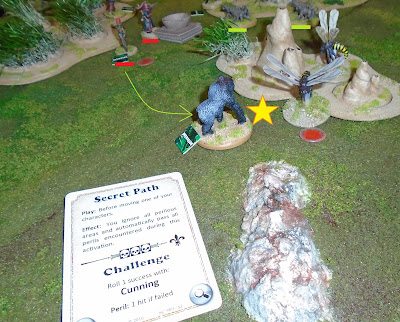 Having scared half the cultists last turn, Koko returned to investigate the grave (minor plot point).  He used a Secret Path to avoid the increasing number of wasps that had now emerged from their nest [perhaps he swaggered in a hypnotic manner that made the wasps drowsy?  Or he managed to convince them that he really didn't have any jam sandwiches?  Who knows the ways of a gorilla?].

Without being pestered by the giant bugs, it was relatively easy for Koko to collect evidence of the demise of yet another member of the ill-fated Darrow expedition. 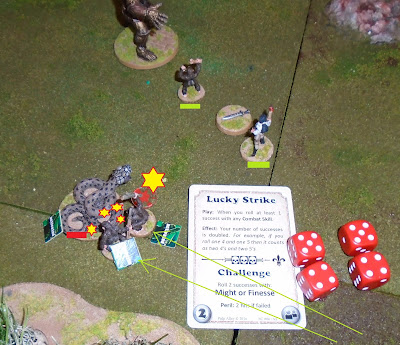 In past games, the cult's giant snake has dispatched a number of monkeys with ease and it was no surprise when it slithered forwards and engulfed another one.  However, this time the simians fought back!

First, in an act of desperation, Caesar took on the serpent and - amazingly - landed a hit on the monster without receiving any injury himself.  Encouraged by this, Kobo ran in to the fight and landed a couple of blows.  This turned out to be on a vital spot (Lucky Strike card) and suddenly Kobo's decent 2 hits turned into an unstoppable 4 hits.  Both simians pummeled the snake with rocks and sticks and bit & tore at it until the creature stopped moving!  [The snake lost 2 successive fights, failed all its health checks and then fluffed the necessary recovery roll at the end of the turn.  This was the Day of the Monkeys!]. 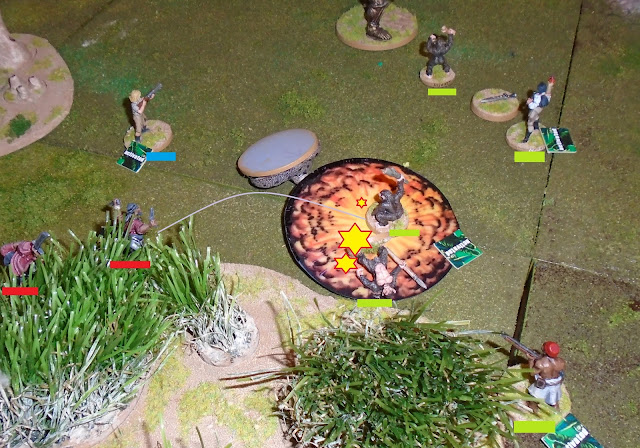 Of course, the simians have another nemesis: the cultist grenadier is very fond of blowing up small, furry animals.  He threw a bomb into the melee and the explosion caught Caesar by surprise, tossing the monkey aside like a rag doll.  Oh, well... 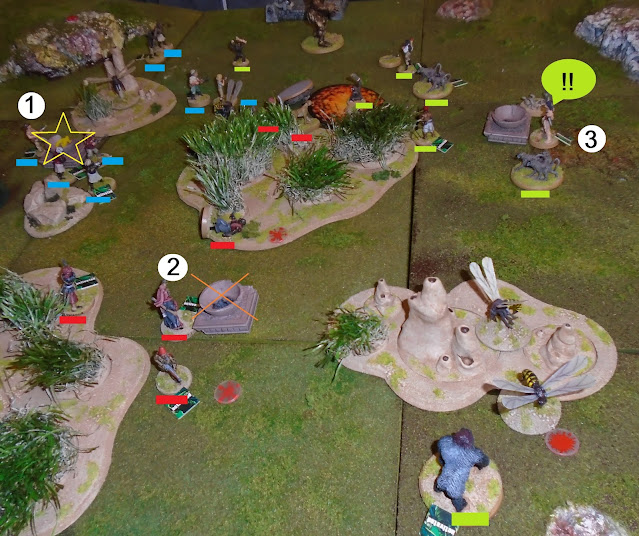 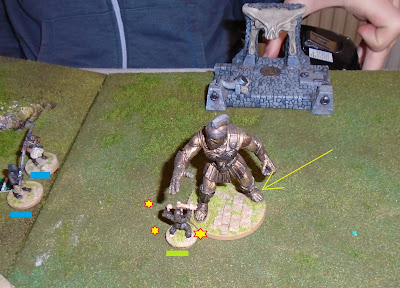 Hurkey continued to dance around the metal guardian.  The huge, living statue made multiple attempts to crush the presumptuous beast, but once again the monkey dodged aside [truly, this was heroic stuff from little Hurkey!]. 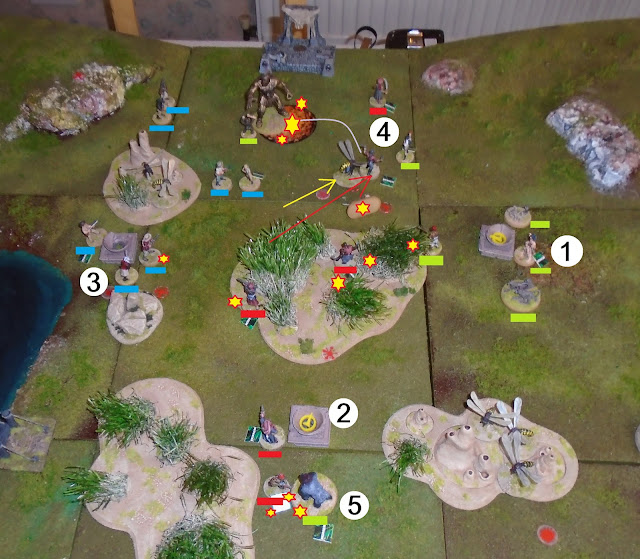 So, once again the gate-opening ceremony failed.  It's only turn 4, though - there should be enough time yet, shouldn't there? 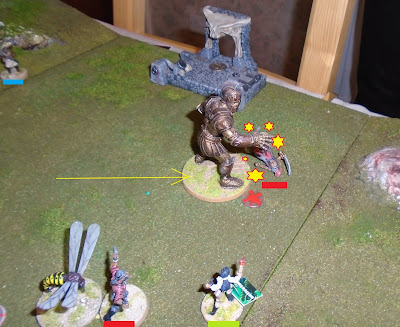 This time, the guardian pulverised an unwary cultist. 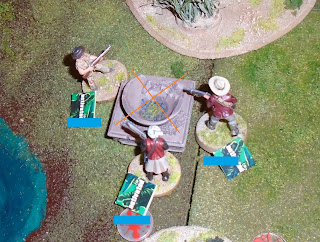 OK, let's try again.  Sir Henry and his cohorts tried to light a fire on the altar, again without any success.  There were massive groans of despair from all the players at this! 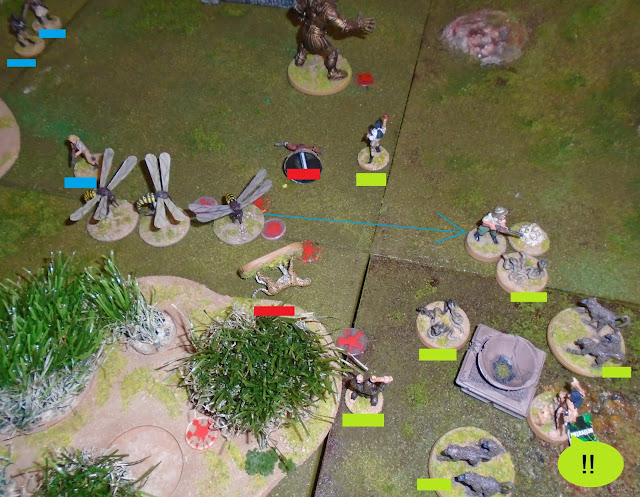 Much squabbling was done by various minor league members, which served mainly to rouse even more wasps. 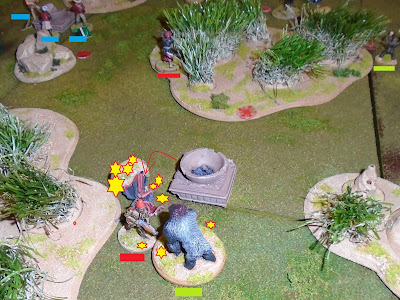 Seeing no need to attempt his part in the ritual either, Al Masoudi left his altar and attacked the gorilla [who was busy trying to pull the arms off the cult's Nghai hunter].

It seems as if the cult leader had bitten off more than he could choose, though: Koko won the fight and then used his Savage skill to fight again - winning that too.  Al Masoudi was left battered and down in the dirt! 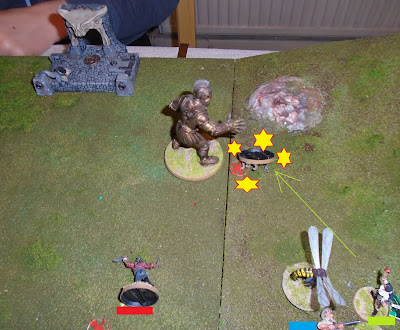 The guardian continued to pick off one model per turn.  This time one of Tarzan's many swarms was the closest model to the gate and therefore the focus of the behemoth's wrath. 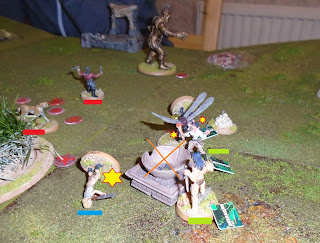 OK, this is getting desperate now - can nobody open the gate?

Tarzan was first to attempt the ritual this turn, but this time he failed it.  Lady Elaine, having retrieved the ancient sword [minor plot point] came to assist despite being pestered by Captain Goode and a giant wasp.  She couldn't light the fire either. 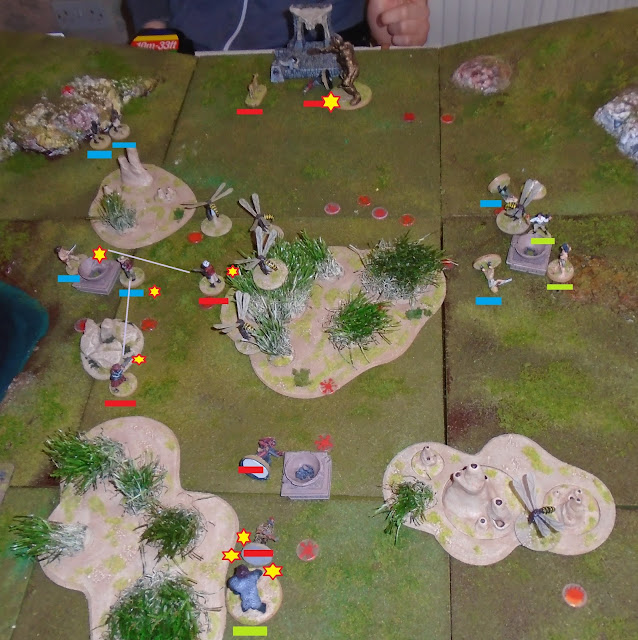 Since the ritual was already compromised, the rest of the ever-diminishing crowd of characters squabbled among themselves and tried to avoid the attentions of the ever-growing number of giant waspquitos. 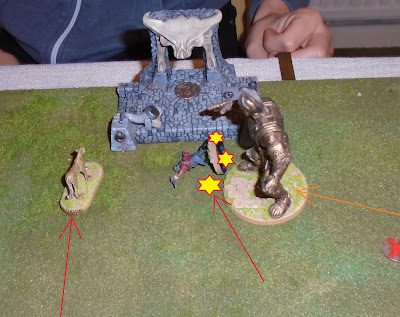 One cultist couldn't take the strain any more and made a break for the still-closed gate.  He screamed at it to open [perhaps "open sesame" or some such phrase?], but the doorway remained stubbornly shut.  Then the guardian picked him up and crushed him to death.

Do you remember that Sir Henry had played a Buy Some Time card much earlier?  That event caused the game to extend into a seventh turn - but this would absolutely be the last turn possible.  Could the remaining leagues sort out their differences and force the gate open?  Even if they did complete the ritual and the portal opened, would it be in time for anyone to enter the Forbidden City?  Let's find out... 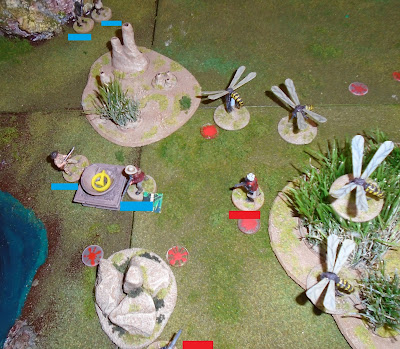 First to go was Sir Henry.  He lit the fire on his alter without too much trouble. 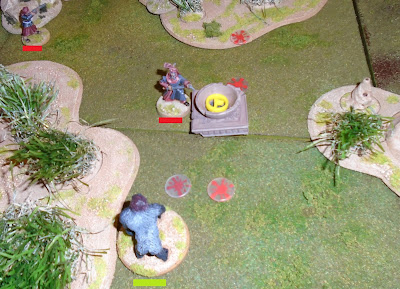 Next up was Al Masoudi.  He had recovered consciousness after the beating he took from Koko, but was far from at his best.  Even so, the cultist leader dragged his battered body over to the nearby altar and completed his part in the ritual, under the watchful eye of the gorilla. 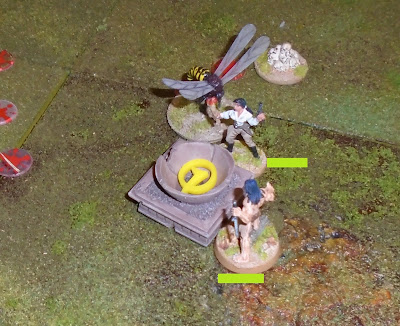 Could Tarzan finish the ceremony and cause the gate top open?  He could - he did!  With the last altar alight, the gateway to the ancient city groaned and creaked as the barrier withdrew.  The path was now open! 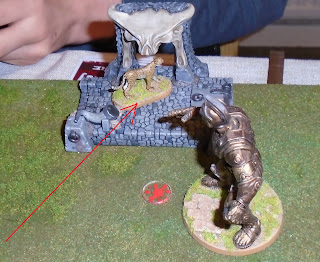 Now for the difficult part - was anyone close enough to make use of this success?

The cult's cheetah darted like lightning, raced past the guardian before it could react and vanished into the dark tunnel. 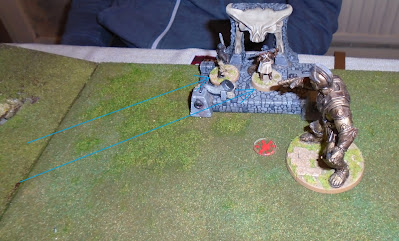 Behind the big cat, the two ascaris from the cliff top came huffing and puffing along.  They just made it into the doorway as well before the ground shook and started to split apart.  All the other characters were forced to beat a hasty retreat as an earthquake split the ground, demolishing the entrance and burying the guardian in a newly-formed crevasse.

Who won?  Well it's something of a technicality, since everyone had fun and since all the leagues can progress.  Still, for the record:

Nobody went after the Guardian - the major plot point.  Even Sir Henry, who seems to like facing off against huge monsters, decided early on that this construct was nigh impossible to injure.  Indeed, all the players rapidly figured out that the guardian could only attack (and defeat) at most one character per turn,.  The rather callous tactic employed was then to present it with a new minion to squash once per turn and otherwise try not to provoke it too much.

Well, that went down to the wire, in extra time!  By the end all the players were rooting for each other's heroes as they struggled to light the altars and complete the gate-opening ritual.  They barely did it, but a few characters managed to get through before the gateway was closed forever.

These few who entered will allow the rest of the leagues to proceed to the next scenario.  Mind you, those characters who didn't go through the gate [i.e. almost everyone!] will be delayed and won't join the next game until its turn 2.  Presumably the cheetah and two ascaris lower ropes over the wall, switch off the city's defensive mechanisms, find another way in or otherwise use their presence in the city to help those who are left outside. 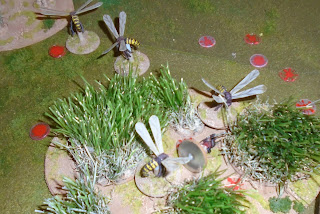 The wasps were interesting.  We made up their behaviour on the fly and that wasn't great - the rules for deploying and moving them were poorly defined.  Still, we worked around this and by the end they had changed from being a minor nuisance to a considerable irritant.  Which is how it should be for such creatures, I think.

I'm really not sure how to decide this, as none of the characters performed exceptionally above their expected behaviour.  Possible candidates:

Again, I don't think there are any truly obvious candidates for this title.  Still, here are a few suggestions: