Fresh Zombies - and a Survivor

Recently I published a short review of Studio Miniatures' new plastic zombies.  In that article, I claimed that the completed figures I was showing had been painted in too much of a rush and that I could do better.  Well, I took a bit more time and care over this lot.  See what you think...

Here are another 4 of my Studio Miniatures builds.  I've done some things a little bit differently from my first efforts:

There are another 3 new zombies in this second picture.  The extra model (at the left hand end) is one of my original builds; this shows clearly the difference between the small, moulded base and the larger, separate ones. 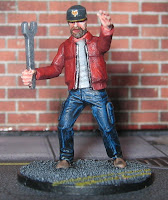 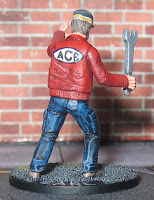 I said before that I thought the plastic Studio Miniatures' zombies could be converted into (living) people without too much effort.  Here's one I prepared already, called "Earl".  I've equipped him with a large spanner or wrench.  The tool came off some vehicle stowage kit (I cannot remember where I got that) but could just as easily have been made from scratch from plastic card or green stuff.  I've remodeled the open right hand so that it is clenched around the spanner, but the other arm hasn't been altered at all.  Other than the hand, the only other modification was to fill a small tear in the back of his jacket.