The Assault on Starbase 13

Federation Intelligence are aware that a flotilla of Orion pirates are operating out of an old battlestation near the Tholian border.  This starbase is heavily fortified and so the pirates have been immune to attack by local forces.  The recent arrival of capital units from Starfleet has changed the picture though: Admiral Mottram has decided to use his squadron to capture or destroy the Orion base and thusprevent the pirates from raiding this sector! 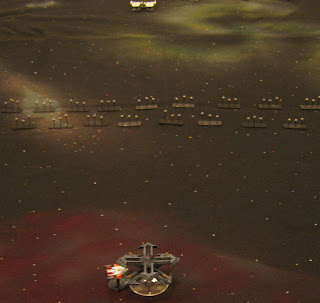 The Federation attacking fleet consists of:
The Orion defences were:

Admiral Mottram brought his task force in closely grouped and at high speed.  The plan was to close with the battlestation as quickly as possible, so as to reduce the impact of its long range weapons.  The sweepers would lead the way and blast right through the minefield. 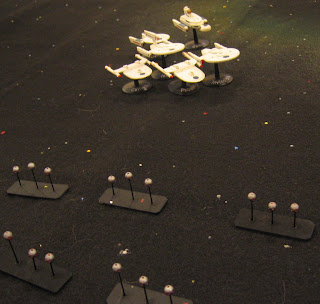 Immediately, the battlestation launched fighters and sent them off to the left.  The Federation fleet jinked to the right and completely wrong-footed them.  However, it wouldn't take long for the fast Orion fighters to catch up... 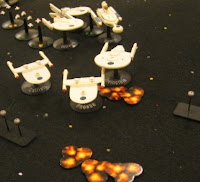 USS Gemini launched her Federation fighters just as the fleet entered the minefield.  Callisto managed to sweep one set of mines successfully, but Phoebe failed to clear a second set.  These wouldn't have exploded for the minesweeping ship, except that the Invincible was close on Phoebe's heels and she caused them to detonate.  To add insult to injury, Phoebe then failed catastrophically to sweep the second row of mines and another cluster went off.  The multitude of explosions left Phoebe reeling and out of control; both Invincible and Callisto took moderate damage as well.

The Orion fighters were determined to attack the Federation battleship, but this didn't work out very well for them.  Firstly the Federation intercepted half their strike force with superior numbers of fighters and savaged it.  The other Orion craft then made an attack run on the Intrepid, only to discover that the Federation minesweepers had been converted from escort cruisers - and that the conversions had still left them with a considerable defensive capability.  The combined flak from half the Federation fleet completely annihilated these Orion fighters. 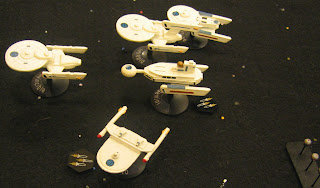 Admiral Mottram might have been forgiven for thinking that the worst was over.  After all, his fleet was now through the minefield and was approaching the range where his weapons would start to become effective.  He'd disposed of almost all the Orion fighters (just 1 remained!) for minimal loss.  What could go wrong now?

The Orion heavy cruiser Terror had undocked from the starbase and was slowly building up to battle speed.  She was now in range (just) and chose to fire both of her missile salvos at once, figuring that she probably wouldn't get another chance.  One salvo locked on to Callisto and the other on to Gemini.  In both cases, an unusually large number of missiles were on target and the ships messed up their defensive fire badly.  4 warheads hit each target, causing severe damage and turning Callisto and Gemini into barely controllable hulks.  Callisto suffered the further indignity of a non-critical hit: she lost the gravity control in the canteen and the cooks were left floating in a mist of hot soup and meatballs! 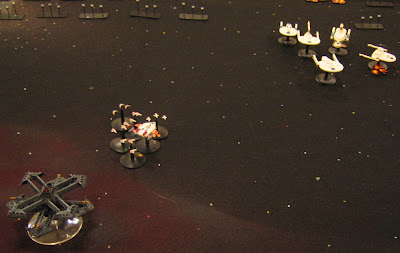 Revenge of a kind was taken when the Federation fighters sprinted ahead of the fleet and pummeled Terror.  But this didn't matter too much to the Orions; the ship had already fired all of her expendable ordnance and wasn't expected to survive beyond that anyway.  The lone remaining Orion fighter pursued the Federation craft doggedly, but failed to achieve anything.  Indeed, the Federation pilots just ignored him contemptuously for the remainder of the game! 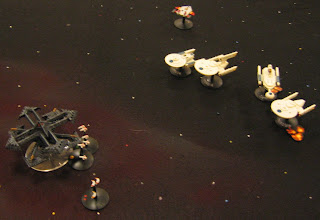 The carrier Gemini was out of action, but the commander of the Federation fighter wing decided to turn his attention to the battlestation.  This turned out to be an unlucky choice, as the starbase had vast numbers of defensive turbolasers and microrockets.  The Federation attack force was almost completely destroyed and failed to inflict any significant damage in return.

At the same time, the battlestation fired on the approaching capital ships.  Beam fire was intense, but only had limited effect on the Federation force.  Then the station fired 4 torpedoes at Invincible.  3 of them hit and a '6', '6' and '5' were rolled for damage.  Truly the dice gods were on the side of the Orion pirates during this game!  The Invincible staggered out of formation with her weapons destroyed, engines off line, bridge wrecked, life support failing and warp core going critical.

By now, there were dark mutterings against Admiral Mottram from all the other Federation players.  At this point the Intrepid chose to play her trump card.  The admiral held the Federation's stock of event cards (see here for a brief mention of how these events work) and announced that Intrepid would "Match their shield harmonics!"  It was not to be, though: the Orion commander responded with an "That's not fair!" card of his own and cancelled the Federation event.  Intrepid's fire then did only minor damage to the battlestation. 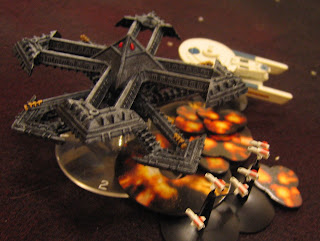 In desperation (and probably facing a court-martial should he return), Admiral Mottram ordered the Intrepid's crew to abandon ship.  Without waiting to determine whether these orders were completed, he took the helm and accelerated the battleship straight towards the starbase.  As Danube passed on one side, Intrepid ploughed into one face of the starbase and exploded!  The Federation were unlucky and only rolled a '1' for their damage multiplier and thus failed to destroy the station.  Even so, the facing quadrant of the space station was badly damaged.

Amazingly, the only ship destroyed was the Intrepid, which wasn't a surprise considering she rammed a battlestation of 4 or 5 times her own mass.  All the other Federation ships were crippled and out of control, apart from Danube, which had somehow come through everything pretty much unscathed.  Even the Orion cruiser Terror had been able to creep away after her one-and-only devastating salvo, aided somewhat by the playing of a "Legendary Engineer" event card to assist with damage repair.

The captain of the cruiser Danube reported that Admiral Mottram managed to make it to an escape pod after locking the battleship's controls on a collision course with the starbase.  However, the Orions have denied holding him as a captive, so he is officially listed as "missing in action".  But who knows whether the Orions are telling the truth?

The Federation plan could have worked, but 2 things went wrong: