The Three Doctors. Who?

Long before I started this blog, we sometimes played the Doctor Who Miniatures Game (DWMG) at my local games club in Helensburgh.  Each time we did this, I always felt that it hadn't worked quite as well as I had wished.  This is in no way a fault of the rules, but rather because most of the published scenarios are for small forces and therefore are not really suitable for the 6 or more players typically wishing to participate in my games.

Eventually, succumbing to pressure from my son and others, I revisited this.  I remembered a very grand scenario, designed for conventions: "The Five Doctors".  Now this is a bit beyond my resources, requiring as it does a large tower, cliffs with caves, mountains with traversing ropes, 5 doctors plus assorted gamesmaster-controlled monsters and so on.  However, maybe I could take the basic concept and adapt it to my needs...

The Master is up to his old tricks again.  Somehow he's got hold of a device that is scooping random groups of aliens from all over time and space and depositing these creatures in a desolate, icy, ruined city.  Why?  I don't know - maybe he just likes to mess with things?  Anyway, amongst the groups thus displaced are 3 incarnations of the Doctor, each with some companions. 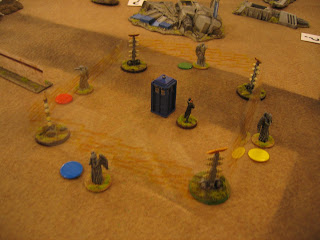 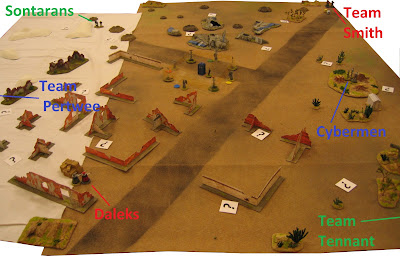 The players were divided into 3 teams.  Each team would take 1 doctor (plus some companions) and would be in charge of one group of monsters.  They could use these monsters to confound the other Doctors or to aid their own (i.e. by attacking the other teams' monsters).  The only restriction was that the various Doctors and companions may not attack each other.  So: 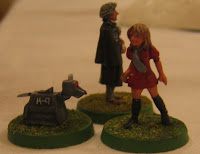 Team Pertwee consisted of the 3rd Doctor, Jo Grant (a screamer) and K-9 (the robot dog).  They also had control of 3 cybermen on the opposite side of the board. 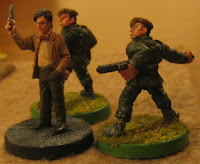 Team Smith had the 11th Doctor and a couple of UNIT soldiers.  They had 2 daleks with which to terrify the opposition. 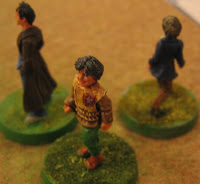 Team Tennant was made up from the 10th Doctor, Sarah Jane Smith (screamer) and Adric, the boy wonder (scientist).  This group controlled 3 Sontarans.

The Game: At The Beginning 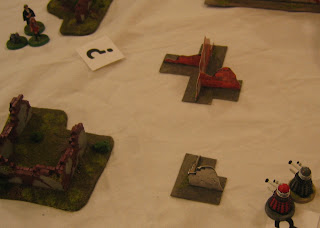 In early moves, Team Pertwee were chased around the snowfields by daleks on one side and Sontarans on the other.  Although neither set of monsters could get a clear shot at the good guys, they did prevent them from making any progress. 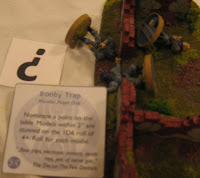 Eventually the daleks lost interest and moved off to chase Team Tennant instead.  The Sontarans thought they had finally caught the 3rd doctor in the open, but Team Pertwee played a devastating Booby Trap card which stunned all 3 of the short aliens. 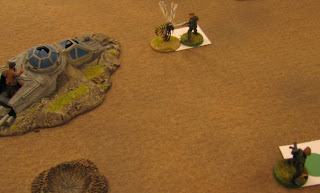 Team Smith had split up to search for clues (and isn't that such a cliché!).  The Doctor was investigating the crashed spacecraft when one of the UNIT troopers discovered what happens if a clue card doesn't have a coloured spot on the reverse.  In this case, he disturbed a giant wasp! 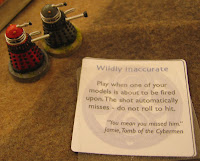 Meanwhile, Team Tennant had been merrily collecting clues, quite unthreatened by anything.  Sadly for them, they just couldn't find matching sets.  By the end they had collected exactly one clue for each of the 4 possible colours.
Eventually the 2 daleks managed to get in range of Sarah Jane and opened fire.  They would probably have hit too, but Team Tennant avoided that by playing a Wildly Inaccurate card at an opportune moment. 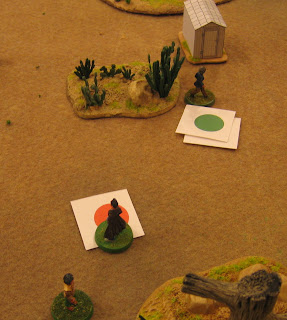 Team Tennant then ran for the shed.  The daleks followed, though at a slower pace. 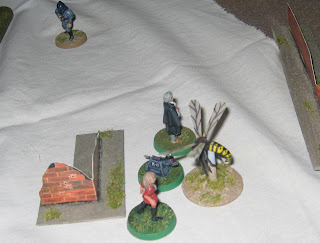 In the snowy ruins, the first clue that Team Pertwee investigated turned out to be a giant wasp attack.  Fortunately for them, the insect chose to attack K-9, who could at least fight back with his nose laser.    Even when the stunned Sontarans started to recover from the booby trap and approach the team, Jo and the 3rd Doctor refused to leave the tin dog even though they were not really able to assist in the fight. 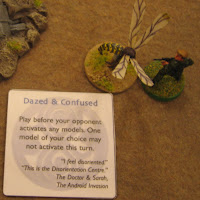 Team Smith's trooper used a Dazed & Confused card to escape from the wasp that he was facing.  In true Doctor Who style, he and his companion then fired repeatedly at the beast without managing to inflict any damage on it. 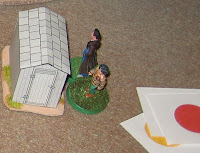 At about the same time, the 10th Doctor and Adric (Team Tennant) entered the shed to look for items with which to invent something.  It looked as if it might be a close-run thing, as the daleks were approaching steadily.  Sarah Jane stayed outside, hoping to lead them away by using her monster magnet ability, if necessary. 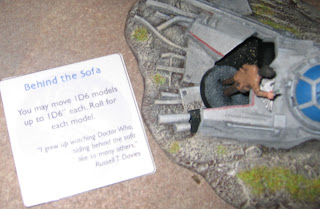 The previously dormant cybermen suddenly decided to make a move; they approached the 11th Doctor from behind, whilst he was working.  A quick Behind the Sofa event card moved them all 2" further away than they had been - which meant that they were not in range after all! 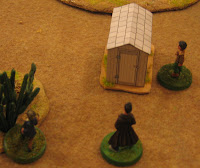 Much to his annoyance, the 10th Doctor was also moved 2" by the same event card.  This took him right out of the shed where his invention had been progressing steadily and into open sight of the approaching daleks! 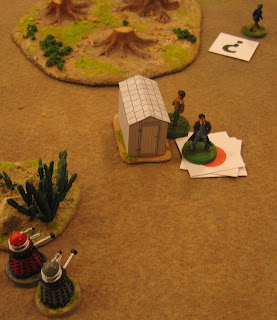 He dived back into the building just in time to avoid being shot.  Fortunately for Team Tennant, the daleks decided that it was vital to their plans to capture Sarah Jane in preference to any other activity.  The Monster Magnet ability has rarely been so useful - had it failed, all the daleks had to do was wait at the shed door! 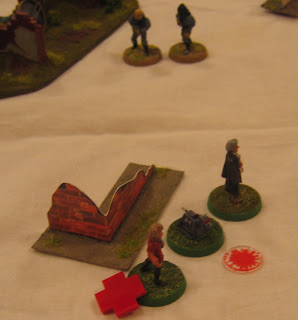 Team Pertwee was still in trouble, watching K-9 fight the wasp.  After a number of rounds of shooting, the 2 Sontarans who had recovered from the booby trap managed to hit Jo Grant.  She had to use 2 of her luck points just to stay alive, but still took a wound.  This finally spurred K-9 into using some of his own luck to kill the wasp. 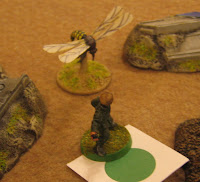 The UNIT troopers from Team Smith had found a couple of green clues, but then one of them ran into another wasp.  This time, a single accurate, aimed shot from his companion was enough to dispatch the beastie.  Quite surprising for an unnamed character!

Both Team Tennant (working in the shed) and Team Smith (in the wrecked spacecraft) now came up with inventions.  Oddly enough, they both identified the Achilles heel in the plans of a group of monsters! 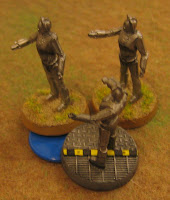 The 10th Doctor (Team Tennant) discovered a hole in the dalek's plan: they were relying on an old spatial coordinator to report their progress to their leader.  This vulnerability was placed near the edge of the board, where the cybermen promptly pounced on it.  From now on, the daleks would be demoralised and would require a morale test (at -1) in order to perform any action! 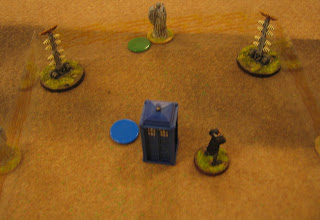 Over in the ruined spacecraft, the 11th Doctor (Team Smith) discovered that the cybermen had intended to steal the tardis itself.  The token for their vulnerability was placed beside the blue box and was therefore inside the force field.  Cunningly, the cybermen had managed to adjust the token's position so that nobody could reach it (unless they had virtually won the game, that is)! 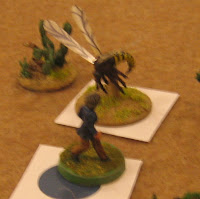 Sarah Jane (Team Tennant) had spent much of the game running from the lovelorn (?!) daleks.  They were not fast enough to catch up, but hadn't given up their intent to capture her.  Eventually, though, she ran into another giant wasp. 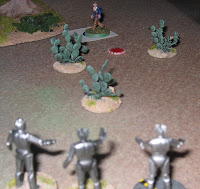 For a moment, it looked touch and go for the small woman.  The daleks were approaching from the rear, cybermen from ahead and the wasp was buzzing furiously and trying to sting her.  However, all ended well for Sarah Jane when the cybermen tried to shoot her.  She used 1 point of luck to shift the only successful shot from herself onto the wasp, which was promptly fried by the blaster hit!

The 11th Doctor made it up to the force field, on the green-coded side.  He already had 1 green clue and the second UNIT soldier was bringing another, so the chances looked good for Team Smith's next turn when they would attempt to deactivate the barrier. 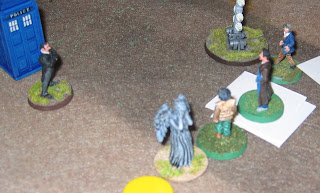 Seeing this, all of Team Tennant raced up to the yellow-coded force field.  Luckily for them, the 10th Doctor had a spare action left after his move.  Despite having only 1 yellow clue, Adric's scientist bonus gave the Doctor the advantage he needed to switch off the force field.

The cybermen were now the only hope of stopping either team from challenging the Master.  They moved into range of Team Tennant and opened fire - but missed with all their shots! 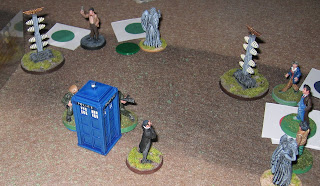 Team Smith managed to drop the green force field and the UNIT troopers rushed in to disrupt the cybermen's plans (by finding their Achilles Heel token)... 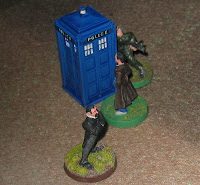 ...but it was too late.  The 10th Doctor stepped forward to challenge the Master.  In a dazzling display of wit and cunning, he persuaded the evil mastermind to step aside and relinquish the tardis.  Team Tennant had won the game, thus conclusively proving the superiority of the 10th Doctor beyond dispute! 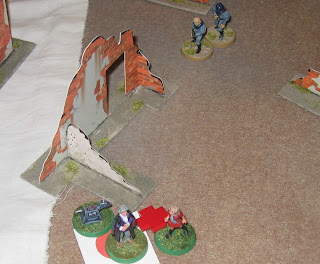 And what of Team Pertwee?  The 3rd Doctor and K-9 were still assisting the wounded Jo Grant through the ruins, pursued doggedly by 2 Sontaran warriors (the 3rd one never did regain consciousness after the booby trap).  Occasionally the Sontarans would have a clear line of sight, but the odd long range shot only managed to scratch K-9's paintwork.