HOTT: It Was The Week Before Christmas...

Just before midwinter, the Knights of Lyonesse received an appeal for help from a reclusive toymaker who lived in the northern wastes, near the edge of the world.  It seemed that a large band of goblins was marching towards his settlement and threatening to pillage it.  The Grand Duke of Lyonesse felt morally obliged to help; in part this was because the Knights are sworn to protect the weak and helpless, but also he felt a certain amount of guilt because his forces had displaced the goblins from their usual haunts and set them on their path into the wilderness (see here for that story).

On reaching the toymaker's workshop, the knights were entertained royally, with a feast of roast poultry and root vegetables followed by many steamed puddings and fruit pies.  Served alongside this were copious amounts of mulled wine.  Most of the knights, anticipating the oncoming battle, were restrained in their intake.  However, the heroic Red Knight had a few tankards too many... 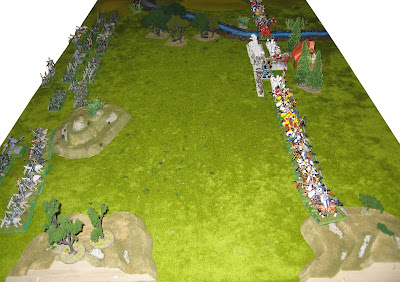 In the morning, the massive goblin army approached from the west.  They had the usual mixture of hordes of foot soldiers, packs of wolves (both ridden and loose) and a scattering of trolls.  The Knights lined up on either flank, while the toymaker's forces were positioned in front of his house. 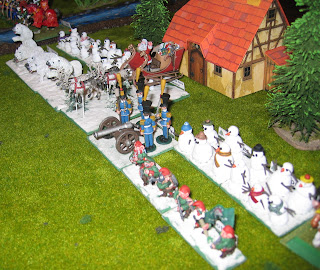 The toymaker had an eclectic mix of local troops to help defend his domains.  He himself went to battle in a large sleigh drawn by flying reindeer.  Some of his elven helpers had been armed with what their boss called "sten guns" and ".303 Lee Enfield rifles", though the Knights understood little of such peculiar devices.  These elves were strange to them, being short, round and jolly; quite unlike the tall, thin, serious types of which they knew. A few of the local ice bears would fight alongside the toymaker and some enchanted wooden soldiers manned a popgun.  Finally, all of these allies had been busy making snowmen, though the knights didn't see how that would help! 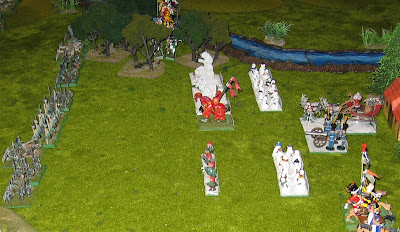 In the centre and north, the goblin hordes moved forwards steadily.  The knights advanced rapidly across the stream and through the woods, while the ice bears and elves also moved forward.  The Red Knight, his brain addled by too much drink, attached himself to the bears and followed them. 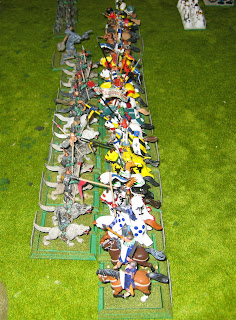 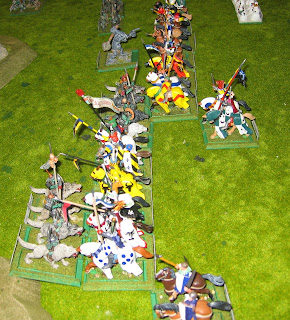 After a hesitant start, the southern lines of wolf riders and knights met in a thunderous charge which left both sides reeling. 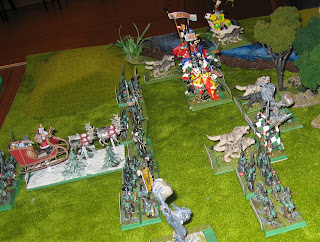 At the other end of the field, the knights emerging from the stream and the woods were surprised by the ferocity of the counterattack.  In particular, the wolves caused much difficulty for the horsemen.  To assist them, the toymaker flew his sleigh over the heads of the goblin chief.  However, he didn't dare to land in case he was swamped and surrounded; the goblins just ignored the flying sleigh as they put more pressure on the knights.  No matter how many of them fell, there always seemed to be more goblins coming up from the rear! 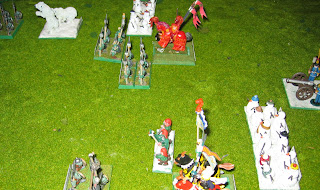 Back in the centre, the ice bears were all busy chasing hordes of goblins, in some cases almost back to their starting lines.  The Red Knight was having trouble, however.  He could barely stay on his horse and certainly couldn't defeat even a single horde - which was very poor indeed for such a famous hero!  The popgun made loud noises and occasionally the goblins would step backwards in fright, but then they'd realise that they weren't hurt and so they just kept on coming. 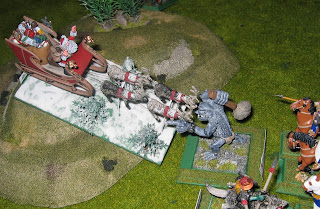 Finally, the toymaker saw his chance.  From high in the air, he saw that the southern block of knights had lost their general and were wavering.  He flew across the battlefield and landed with a rush, careering downhill into (and over) an unfortunate troll.  The behemoth was obliterated instantly by the heavy sleigh (a hero general, attacking downhill, has an impressive combat score in HotT). 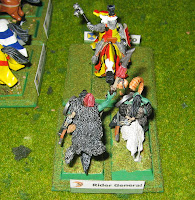 This inspired the knightly hero (a distant relative of Roger the Castellan and others who had all perished while wearing the same livery) to attack the closest goblin warlord.  The knight brushed aside the bodyguard and rained blows upon the creature, leaving him broken on the grass and the nearby goblins leaderless and demoralised! 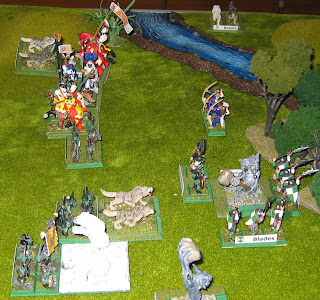 In the north, the fighting was intense and chaotic.  All semblance of organisation was now gone and troops fought in confused, individual melees.  One unfortunate knight was pushed off the edge of the world by wolves, thus disproving those savants who claim the world is round (as if)!  The knights couldn't sustain the losses they were taking for long; the goblin hordes just kept on coming.

Again, the toymaker flew the length of the battlefield to assist.  He managed to find the goblin's general and attacked, pinning him against a block of unyielding wolves.  With nowhere to go, the goblin leader perished beneath the hooves of the magic reindeer.  Two of the 3 goblin armies were now demoralised, though the northern knights had also had enough! 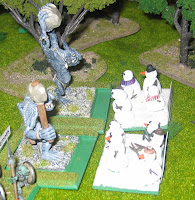 In the centre, 2 huge trolls advanced on a group of snowmen.  They pulverised one base, but the other snowmen retreated.  The slow behemoths just couldn't finish off the more nimble snowmen, no matter how far they pursued them (and there's a sentence I never thought I'd write!).
Nearby, the Red Knight was still having difficulties against a single goblin horde.  Even with the assistance of some nearby snowmen, the famous hero just couldn't land a single blow on his opponents. 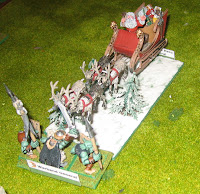 The toymaker was on a roll now!  He took to the skies again and returned to the centre.  In the plains before his house, he spied the last remaining goblin general and swooped to attack.  Such was the ferocity of his assault that he ran straight over the accursed creature, shouting as he did so "HO HO HO!  YOU'VE BEEN A VERY NAUGHTY BOY, HAVEN'T YOU!"

One goblin horde did finally reach the popgun, just before their entire force collapsed and routed.  They were laughing too much to achieve anything against it, though and so this last small fight ended in a stalemate.

Goblin of the Match

Probably the southern goblin general.  He killed the knight general who faced him in single combat and nearly defeated the army facing him.

Definitely the toymaker.  He intervened in 3 critical fights, defeating a troll in the south and goblin warlords in the north and centre.  All of these were decisive turning points!

The Red Knight gets an award for "most inept model".  As a hero, he was expected to sweep through many hordes without breaking a sweat, but he spent the whole game tussling with the very first one he encountered.  Even with aid, he was unable to defeat it!  The popgun comes a close second; it made a lot of noise but achieved very little.


A Merry Christmas to all my Readers!

Thanks to you all; without your support, this blog wouldn't have happened.
Posted by Colgar6 at 07:33