Recently, I became aware of Frontline Wargaming, a small British company with an unusual and eclectic list of products.  This is the place to go if you want an igloo, furniture for your Old West buildings or a monorail for your evil overlord's underground lair.  It all looks wonderfully different!
I thought I'd test the waters with a small order; this was with a slight amount of trepidation since Frontline still use the old-fashioned system of ordering by post or telephone.  We're all spoiled in recent years by sites which offer instant-gratification Internet shopping carts.
I needn't have worried, since I received timely emails in turn to acknowledge the order and to request payment (via PayPal).  Although the website states that delivery may take up to 28 days, my packet arrived in about half this time.  So, what did I receive?  I bought items for several different types of games that I play, but for this article I'll concentrate on the civilian casualties, rather than any of the other terrain or fittings.

For £3.30, Frontline sells a packet of 6 dead, modern 28mm civilians.  The models are resin and are one-piece castings with integral bases.  Out of the packet, these bases have square corners, but I've rounded them off - the resin is easy to cut and this was a simple modification.
The figures are quite clearly dead - indeed in some cases the corpses have been ripped apart.  Not for the squeamish!  Here we go:

Firstly there are 2 women.  One is lying on her back,dressed in a miniskirt and short top.  Her head has been partially torn off, though there are no other visible wounds (not that I'm trying to make light of the trauma she has received!).  The second woman is face down, dressed in a long skirt, jacket and beret.  She has no obvious injuries.  I could have painted a pool of blood underneath her, but less-is-more and I think it's effective without the extra gore.

Next, we have 3 men.  Oddly, they all have belly wounds and their guts are spilling out.  One of the men even seems to have been torn apart at the waist, since his torso is somewhat further from his pelvis than I would consider natural!  Not very nice, really - though quite appropriate for zombie games. 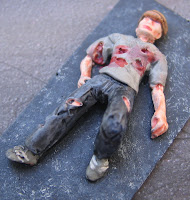 The 6th figure is of a slightly smaller person, perhaps a teenager.  It's not obvious if it's a boy or a girl; it could be either, I think.  This corpse is wearing trousers, a t-shirt and a cap.  The clothing has quite a few rips and tears, but beyond this there are no obvious injuries.  I've painted this model as though he/she was killed by multiple bullet or stab wounds, so possibly killed by a survivor rather than a zombie.

Firstly, the negatives:
Now, the positives:
So, my summary is that these are very good value for a useful set of figures.  Keep up the good work, Frontline!
Posted by Colgar6 at 12:03