Tonight at the Games Club, my son and I needed to leave a few minutes ahead of the official end time.  This was because the Dog Training club he attends was to hold its AGM and they would start rather earlier than normal.  Tuesday evenings are our busy time!  That being so, I had to be able to pack up my game quickly when we had finished.  There's only 1 candidate for this from my regular stable of rules: Full Thrust!

So, a spaceship game, eh?  Now I needed a scenario.  For a change, I thought it would be nice to use some lighter ships such as frigates and destroyers, rather than the more usual cruisers and above.  Right, so what are these light forces to do?  Hmm... I know - how about escaping from a blockaded planet!  One side (let's call them "Rebels") have been discovered operating from a remote world.  The local enemy light forces (I'll call them "Imperials") have penned them in there, but are awaiting heavy units before they can assault the base itself.  The Rebels must escape before the rest of the Imperial fleet arrives, or they'll be caught and annihilated.  How's that? 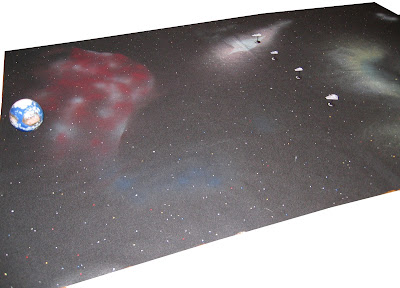 Initial forces were as follows:

Imperial ships have decent medium range firepower, mostly concentrated in the frontal arc.
The blockading squadron was permitted to set up anywhere on the map (but beware the planet's defences; see below).  Their goal: stop all the Rebel scum from escaping!

Rebel destroyers have a powerful short range punch, but are weak at longer distances.  Freighters are mostly unarmed and are not very robust!
In addition to the ships, the planet contained:
As the evacuation progressed, 2 Rebel ships would launch from the planet each turn.  An initial speed of 6 was permitted for the turn on which a ship launched.  This represented the Imperials' uncertainty about Rebel activities on and near the planet rather than any unusual powers of acceleration (besides, a thrust-2 freighter wasn't going anywhere very much without such an initial boost!).  After this special deployment move, all Rebel ships had to rely on their engines as normal.

To escape, a rebel ship had to exit the far end of the table with its warp drive functioning, or at least with the capacity to mend it if damaged.

The Rebel players were given 3 "items" that they must preserve:
Each item could be carried on any ship, decided in advance.  The Imperials wouldn't know which ship or ships held the Rebel items.  If all 3 of the items were saved then the Rebels won a major victory, if 2 then it would be a minor Rebel victory.  The Imperials would win a minor victory if the Rebels saved only 1 and would crush the rebellion completely if none escaped.

The Imperials set up in a line, holding their position just outside the range of the planetary missile bases.  Rebel ships began to leave; first the Martian Princess and the Tiger went one way, then the Lady Godiva and the Lynx headed in a different direction. 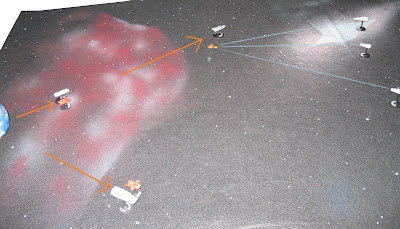 More Rebel ships left the planet, but the first pair were now approaching the Imperial gun line.  Initially, the Star Destroyers concentrated their fire on the Tiger.  Although most of their shots missed, one lucky hit from an ion cannon vapourised the Rebel warship. 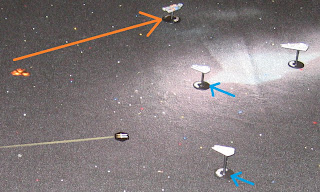 In the excitement, both Imperial frigates edged forward to try to get a better shot as the Martian Princess sped past them.  They failed to halt the fleeing freighter (though it was badly damaged).  In return, the planetary missile base fired a speculative salvo towards the Hammer; 3 of the 6 missiles had just enough fuel to home in on the Imperial frigate and blow it to bits! 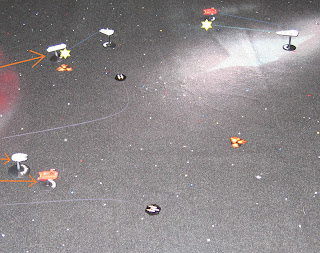 The first pair of Rebel ships had now gone (one destroyed and one heavily damaged), so the Imperial ships to the north concentrated on the third pair.  Despot exchanged fire with the Rebel destroyer Panther and came off better.  Indeed, Panther lost most of her weaponry and sensors, along with her engines.  Her one remaining damage control team spent the rest of the game desperately trying to bring the warp drive back on line!

Iron Fist managed to damage the Olympic, though not seriously.  However, more missiles were launched from the Rebel planet and some of them locked on to the Imperial ship.  Like her sister ship, the small frigate could not withstand such firepower and was lost with all hands!

Meanwhile, the last 2 Rebel ships (the destroyer Leopard and the small, fast trader Peregrine) thought they could now sneak through the unguarded hole in between the 2 Star Destroyers. 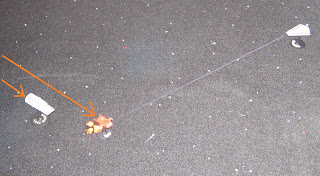 On the near side of the table, the Lynx was badly damaged by medium range fire from the other Imperial destroyer before she could reach effective range for her own weapons.  Out of control after a bridge hit, Lynx sailed off the side of the board (where she would have been an easy target for Imperial ships in the next sector).  The blockaders' strategy seemed to be clear: target the warships in preference to the freighters! 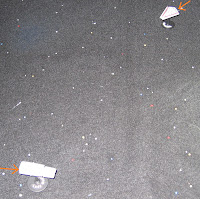 Monarch was then perfectly lined up for a shot at the defenceless Lady Godiva when an extraordinary thing happened. 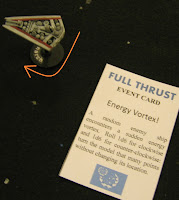 We were playing this game using my prototype deck of event cards.  At this point, the Rebel team decided to play an Energy Vortex card.  Luckily for them, the Monarch was selected randomly and was spun round by 2 points to starboard.  This left her ion cannon unable to bear on the intended target, though beam weapons did a small amount of damage. 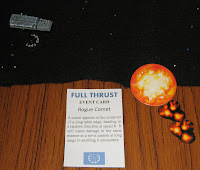 Not to be outdone, the Imperial admiral played a Rogue Comet card.  Again, the player got lucky; the comet appeared very close indeed to the Lady Godiva as she fled along the edge of the board.

The poor Lady Godiva barely made it past the comet when she came face-to-face with yet another Imperial ship.  This was the Iron Fist II, coming in as reinforcements (because one player had lost his entire command).  However, the transport had built up a very considerable speed by this time and wasn't about to be stopped by some puny little frigate.  The Iron Fist II managed to get off one quick shot (which missed) before the Rebel freighter went hurtling past and away into hyperspace!

Back in the Middle 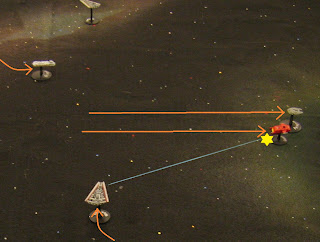 The gap between the 2 Imperial destroyers wasn't as large as it seemed, especially since the Monarch had been spun round towards the remaining Rebel ships.  She fired on the destroyer Leopard and did considerable damage.  Meanwhile, the Rebel freighter Olympic did a desperate jink to avoid the Despot, at least for now!

Seeing that the Rebel ships were now pulling out of range at high speed, the Imperial admiral played a Plasma Fire event.  This affected the Peregrine, much to the dismay of the Rebel players.  However, a small, dustbin-shaped repair droid managed to put out the fire before it could cause any real damage.  The crew of the damaged Leopard transported over to the Peregrine and the Free Trader made her escape too! 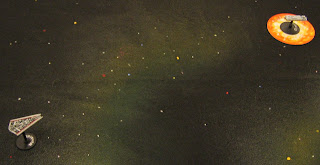 The last Rebel transport (the Olympic) was almost safely out of range by the time that Monarch could draw a bead on her.  Once again, the Imperial ship got lucky; the small freighter was blown to pieces by a direct hit.

The Imperials lost 2 frigates (the 3rd one, Iron Fist II, made an accidental high-speed pass of the planet after a manoeuvring error, narrowly missing both the rogue comet and the furious missile salvos from the automated defence systems).  I doubt the Emperor will be bothered by this; frigates are completely expendable.

Rebel losses were as follows:
And what of the Rebel special objectives?  The Rebel Hero and the Rebel Diplomat were both on the Peregrine (somewhat traditional!), while the Rebel Plans were on the Lady Godiva.   Since both these ships escaped intact, the game was a resounding victory for the Rebels, in the sense that any evacuation can ever be a victory!