At this week's club meeting, I thought that I'd host a game similar to the scenario I designed for a Pulp competition a few months ago: Terror on Tapu Island.  However, this would have to be adapted somewhat, as I don't have the necessary Pulp figures or tropical island scenery.  Also, I felt that it might need to be scaled down a bit, to ensure it could be played out in the time available.

So, here's the story: somewhere in central America, in the late 19th century, a delirious, feverish man in ragged clothes stumbles into a frontier town.  He rambles about a lost land, strange idols and treasure before dying from the combined effects of exhaustion and some interesting tropical disease.

Several armed bands of adventurers set out soon after in the direction from which the stranger came.  Each group discovers a passage through the mountains that has been unblocked by a recent earthquake and uses this to enter The Land that Time Couldn't Quite Remember.

Originally, I had intended to use a group of Neanderthals as locals who didn't want their sacred lands to be invaded.  However, I discovered at the club that I'd forgotten to pack the right models, so instead I just used 3 parties of treasure seekers: 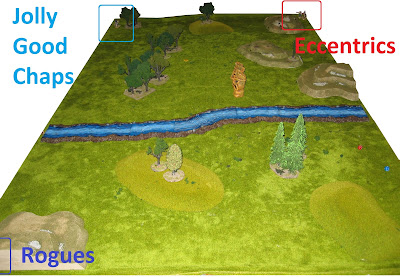 The land was green and fertile, with a stream running through the middle and plenty of small hills and trees.  In the centre of the table stood a couple of odd statues, possibly part of an ancient temple.  Here was where the explorers could search for treasure - if the other teams would let them!

Game 1: Standing in the Open

The Rogues advanced quickly and forded the stream.  Their plan was to split up: Henry and the servant would head for the statues while Piet (the marksman) would hold off the other groups with long-range sniping.

Seeing this, the Jolly Good Chaps advanced steadily.  They took a pot-shot at Piet as he stood in the river, but only achieved near misses. 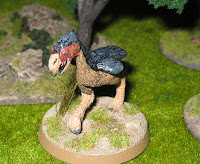 As the Jolly Good Chaps passed the wood, a 9' tall Phorusrhacos came bounding out of the cover.  It charged them, moving at an incredible speed 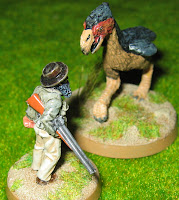 The sight was too much for Professor Contender and Bakhari; they turned and ran for their lives.  However, Sir Reginald was made of sterner stuff (or perhaps the family name of Utterly-Barking wasn't given in error).  He stood his ground and fired a hasty shot from his elephant gun.  Although he missed, the giant bird was confused and puzzled by the smoke and noise; it stopped just short of the man, raised its head and screeched loudly in defiance. 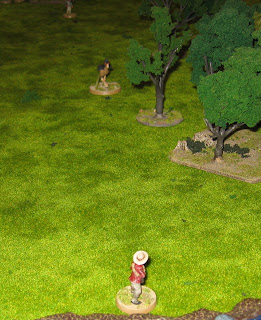 By this time, Piet Rood had used the distraction to crawl out of the stream.  He fired once at the large bird, but missed.  Like lightning, the Phorusrhacos spun round and charged towards this new threat.  However, the old Boer was too experienced to be bothered by this.  He took careful aim, allowing for the range, wind speed and target movement, and shot the creature dead long before it could reach him. 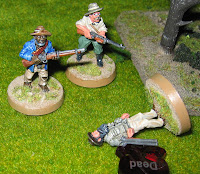 Sir Reginald, believing that he had a tacit alliance with the Rogues, ran back to rally the fleeing members of his own party.  However, Piet didn't plan on letting the Jolly Good Chaps regroup.  Although it was at extreme range, the marksman managed to shoot Sir Reginald in the back.

Before the surprised Chaps could react, Piet took aim again and shot Bakhari dead.  Standing still in the open made them easy targets, even at long range.

Professor Contender exclaimed "I say!" and fired back hastily.  He was lucky; the Boer was also not in cover and the Professor's shot hit him in the chest, killing the Rogue instantly.  Within just a few moments, almost all the people on the left side of the board were dead! 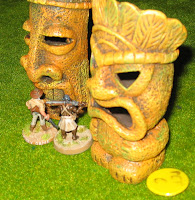 The Eccentrics had barely moved from their starting positions (ferociously bad luck when rolling for initiative!), but the other 2 members of the Rogues were now examining the statues in the centre of the valley.  Henry Orme started digging out treasure with both hands, just as fast as he could.  While he was doing this, the pair were stalked by a PEF (Possible Enemy Force), which approached as close as it could while still under cover.  The PEF ended up just on the other side of one of the statues!  Hearing a rustling noise, Henry looked up at his servant and said "Be a good chap and find out what's going on round there.  Off you go!" 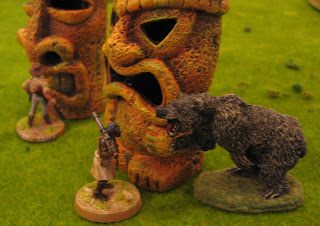 With some trepidation, Gouvimale peered round the corner.  He was right to be nervous, for facing him was an enormous cave bear.  This was too much for the man; he fled, screaming! 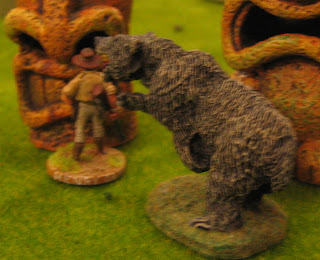 The bear pursued, but immediately came across Henry Orme.  He was still loading a sack with treasure and didn't notice the monster approach until he felt its hot breath on his back.  Although he resisted briefly, the bear was too much for him and Henry was quickly slain. 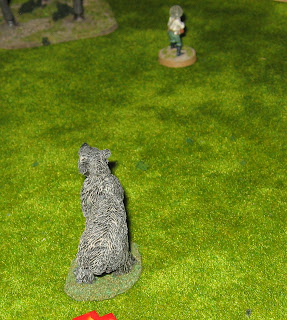 Professor Contender, in the distance, then made the mistake of shooting first at  Gouvimale as he ran past and then at the bear as it prepared to eat Henry Orme.  The Professor missed the last of the Rogues, but he hit and wounded the bear.  This merely angered the beast; it immediately set off in pursuit of the annoying ape.  The Professor was last seen running off the board, trying to catch up with Gouvimale (so that the bear would kill him instead, thus leaving the Professor a clean getaway). 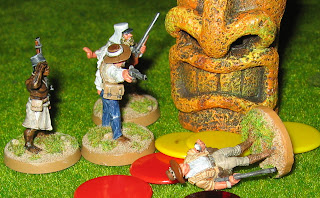 By the time the Eccentrics cautiously approached the statues, they found a dead man surrounded by golden bowls and idols.  No other people or animals were anywhere in the vicinity, so they took their time to collect all the treasure.  The Eccentrics would be very rich men indeed when they returned to civilisation! 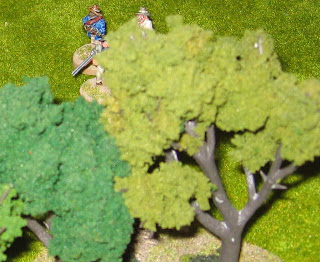 Since we'd played the fist game in about an hour, we had time to reset and play the scenario again.  This time, all 3 groups immediately headed for cover.  The Rogues to the south and the Jolly Good Chaps in the north-west both went for (separate) small groups of trees, while the Eccentrics in the north east made approached behind the ridge line of some hills. 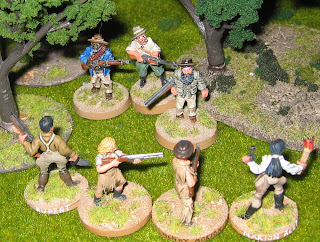 As the Jolly Good Chaps came through their small forest, however, they came face to face with a PEF, which turned out to be another band of adventurers (the Mixed Doubles).  Hard words were spoken and the Chaps were told in no uncertain terms to go back the way they had come. 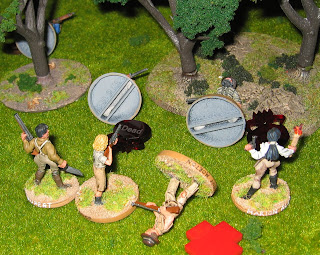 However, Sir Reginald wasn't going to be ordered about like that!  Figuring that the other side was just a bunch of girls, he went for his gun.  Sadly for Sir Reginald, his heavy elephant rifle was too unwieldy and the enemy leader beat him to it.  By the time the smoke had cleared, Sir Reginald and the Professor were lying dead and Bakhari had run away and hid behind a tree.  Henry Morton, the leader of the Mixed Doubles, was also down (hmm - I've got too many characters named 'Henry'.  Must think about renaming some of them!). 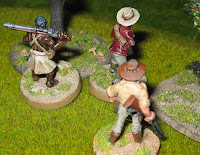 While this altercation was playing out, the Rogues had reached an ideal sniping position, sheltered by some trees on a hill that overlooked the other teams and the statues.

The Rogue's marksman, Piet Rood, immediately made good use of this vantage point by shooting Marion Allen in the back and sending the remaining 2 members of the Mixed Doubles scurrying for cover.

Piet also spotted that Kasiturah, the Eccentrics' gun bearer, was not under cover.  He quickly shot him dead, too. 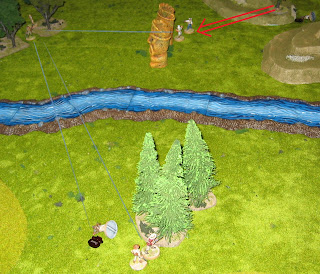 A sniping match then developed between the Rogues (foreground) and the Mixed Doubles (in the further trees).  The Mixed Doubles had the better of the exchange; they shot Gouvimale and with the volume of return fire, both the other 2 Rogues ran out of ammunition.  Meanwhile, the Eccentrics used the distraction of this firefight to run up behind the statues in the middle.

The Eccentrics hadn't counted on the statues being occupied though!  There was a PEF between the stones; this turned out to be a gigantic Glyptodon which was happily browsing for food.  The animal ignored the humans until Richard Lillewhite fired his pistol at it.  Although he failed to injure the creature, it backed off in confusion. 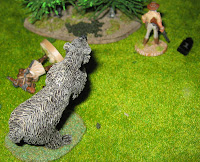 Another PEF appeared and approached the Rogues very rapidly from their blind side.  This turned out to be a hungry, bad-tempered cave bear.  Yet again, Henry Orme was caught from behind and killed before he could react! 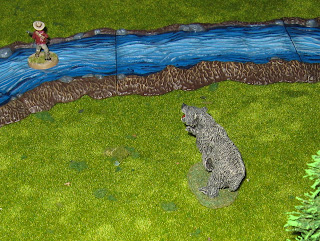 Piet Rood fled from the carnage towards the other humans, but the bear pursued.  However, the Mixed Doubles weren't in a very forgiving mood and so they shot this last of the Rogues just as he was crossing the river.  He fell, badly wounded and presumably either drowned, bled to death or was mauled by the bear.  Or maybe all 3.

This left just 2 members of the Mixed Doubles hiding in the woods and the last 2 Eccentrics in amongst the statues.  Time ran out and we had to pack away before we could bring the game to a conclusion.  Would the 2 teams fight it out to the bitter end, with maybe only 1 man (or woman) left standing?  Or perhaps they'd agree to share the treasure instead?  Would the bear attack the glyptodon, or the glyptodon attack the bear, or either animal attack one of the groups of humans?  Or maybe they'd just wander off, having lost interest?  We'll never know...