A while ago, I posted some pictures of my Viridian mounted troops.  This was not one of my most successful articles, at least when measured in terms of the responses (there weren't any!).  However, I'm not writing this blog entirely for the adulation of others; it also serves as a record of some of my collection.  So, I'm not prepared to give up just yet.

This time, I present the light infantry from my Viridian force.  The Viridians are a science fiction army from the VOID universe and the models are still available from Scotia Grendel.  The infantry in this force are split into 2 separate categories: fully-armoured warriors ("not-Space Marines") and unarmoured grunts.

The light infantry have a distinctly Hollywood-Vietnam feel to them, especially as there are some non-standard pieces of uniform such as sunglasses, bandanas and stetsons.  Additionally, their mix of weapons is very traditional and would be very familiar in a Vietnam movie: assault rifles, rocket & grenade launchers, mortars and heavy machine guns.  No aerial drones, mass drivers or light sabres here!

In my mind, these are a relatively low-tech force, particularly well suited to being a generic army on a backwater planet.  As such, they have appeared in some of my battle reports as "Planetary Defence Force" militia, not particularly well trained or equipped:
So, without further ado, I present the Viridian Light Infantry! 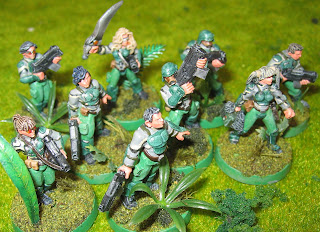 "Strike Commandos" is a very grand title for a squad who differ from the regular infantry only in having a minimal amount of body armour.  Oh, and lighter weapons.  One of them is carrying a box which could be used as any kind of gizmo needed in a scenario, such as a pulse generator, phase emitter or beer cooler.  This is an equal opportunity squad: there are 5 women and 4 men in it, which is as near balanced as you can get with an odd number. 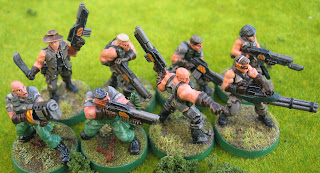 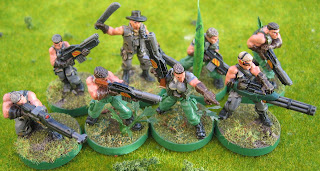 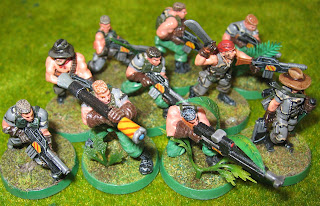 The basic infantry squads have a nice range of different figures in them because I've mixed the official "marine" and "commando" figures together.  I really didn't see enough distinction between these sets to warrant keeping them separate.  There are a few odd poses, particularly among the "marines", but overall these are decent figures.

One other observation: I painted the Viridian infantry in 2 phases.  The first batch was done early in my painting career (at least, early for my 28mm figures).  These can be distinguished by the green trousers and the flocked bases, with a single sprig of plastic foliage stuck to some of them.  I'm slightly embarrassed when I look back on them now.

The later batch of figures have grey, camouflaged trousers and their bases are textured; static grass has been used for sparse ground cover.  There's also some shading on the clothing.  Much better, in my opinion.

I have 2 ground-mounted chain guns for my Viridian infantry.  Again, the difference in skill between my earlier version and the later one is very obvious!  I scratch-built a number of spare magazines for the chain gun on the left; the way these have been strewn about suggests that the weapon has been in action for some time.

My older support weapons had all the crew and the weapon itself on separate bases.  While this is very flexible for casualty removal or for fitting the figures into difficult terrain, I don't think it looks so good. 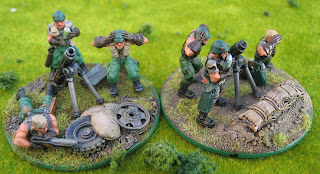 Here are a couple of newer mortars, each mounted on a single base.  This allows the addition of piles of ammunition, spare weapons or helmets and some interesting scenic elements.  It also permits more varied placement of the crew.

I collected a lot of VOID figures from eBay at a time that they were becoming unfashionable.  This means that I have many more infantry to paint, if or when I find the time.  Ideally I'd start by painting up many more squads, since the support weapons above are at least company level assets but I only have enough basic grunts for a strong platoon.  Also I need some command figures, possibly some communication or medical specialists too.  Oh, well - maybe one day I'll get round to this...