Back in January this year, a competition was announced on the Dice of Legends blog.  The rules were quite simple; to enter all you had to do was to submit an article related to Old West gaming.  Prizes (and there were quite a few) were then drawn randomly from the entrants.  Well, to cut a long story short - I won a blister of figures and it arrived yesterday!  The full list of prizewinners is here: prize winners. I'd always thought of Rebel Minis as a maker of 15mm models, so it was somewhat of a surprise to discover that they also make a few 28mm figures.  However, I cannot find any mention of this Old West pack, either on Rebel Minis own website or elsewhere on the Internet.

I'm somewhat curious about these miniatures, so if anyone can fill me in then I'd appreciate it.  Are they a limited edition, given away with Rebel Minis' rules?  Were they a failed entry into the market, since withdrawn from the catalogue?  Perhaps they are the start of a new range, too new to be known on the web?  Or maybe the data is out there and I've just missed it? 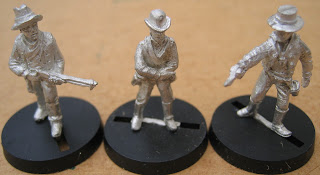 Anyway, here are the 3 cowboys from the blister.  One holds a rifle, the second has twin pistols and the third is firing a revolver.  The sculpting is decent, but not outstanding.  There were a few mould lines on 2 of the miniatures, but these weren't too hard to clean up and I haven't spotted any other issues with the casting.

Here's a comparison shot with a partly-painted Artizan figure.  This clearly shows that the Rebel Minis models are a bit smaller and slimmer.  My Artizan, Foundry and Dixon cowboys are similar in size to each other, so the new models will probably end up as adolescents or just as smaller than average men.  After all, not everyone was as tall as John Wayne!  Or Gary Cooper.  Or James Stewart.  Or Clint Eastwood...


It might take me a little while to paint these up and get them ready for action.  However, I will certainly do so and they'll appear in future games of "The Rules With No Name".  Many thanks, Dice of Legends!
Posted by Colgar6 at 11:13