The Helensburgh Games Club restarted this week after the Easter break.  I planned a big game of Hordes of the Things; this usually works quite well for multiple players.  However, none of my usual group turned up (though the usual numbers of Warhammer 40K enthusiasts were present), so I took one side and my son took the other.

I set up a straightforward 72AP battle, with a settlement on one side and an attacking army on the other.  The story?  The Knights of Lyonesse had sent assistance to the aid of a village in the East that was being plagued by skeletons, zombies and other undead terrors.  Even though the villagers were strangers (and foreigners, to boot!), the Knights were sworn to defend the weak and oppose evil wherever it might be found! 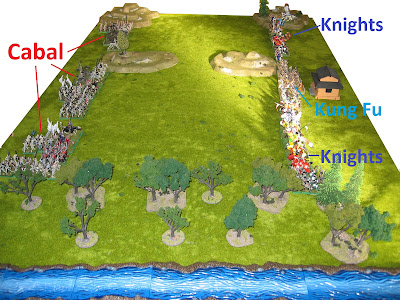 So on the defending ("good") side we had:
whereas the attackers - the Cabal of the black Hand - consisted of:
It occurred to me after setting up these forces that the defenders had a total of exactly 7 heroic characters, consisting of 1 paladin, 1 aerial hero, 1 cleric and 4 heroes.  Surely that's a good omen for them!

For the most part, both lines of troops advanced towards each other until they met in the middle.  While this was happening, there were a number of noteworthy incidents around the battlefield: 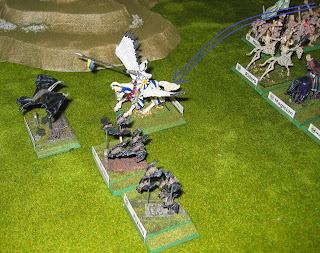 In the north, Sir Artois de Beaumain flew his winged charger over the undead line and attacked their reserve of bats.  He knocked back the big bat before turning round and charging an assistant magician from behind. 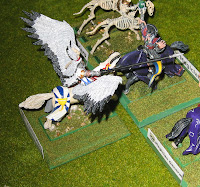 This new foe was completely taken by surprise and Sir Artois killed him before the magician could curse the knight with dark arts. 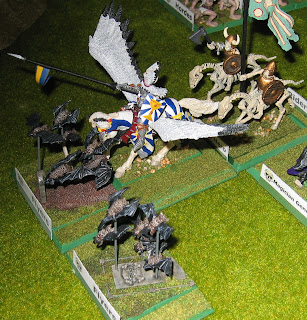 However, the hero was now in the midst of his foes.  Recovering quickly, swarms of bats pulled him and his mount from the sky.  Once some skeletal horsemen joined in as well, the knight was doomed and fell beneath the weight of enemies!  1 hero down!

Bats in the Centre! 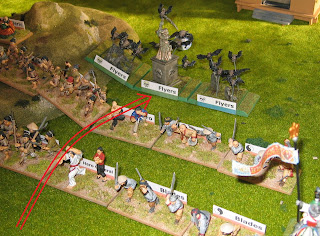 In the middle, the Cabal's bat swarm decided to leapfrog over the villagers and distract them from their advance. 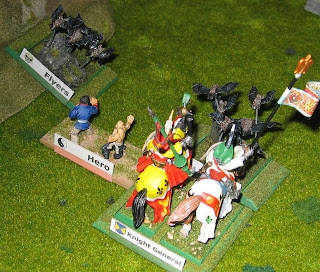 They hadn't counted on Lin Jie, the Kung Fu master.  This hero had a great time destroying the hapless flyers one after another,though it's not known whether he did this by leaping into the air to catch them, by throwing stones with great accuracy or by tricking them into landing.  First one set of bats was wiped out, then another.  I guess that all heroes have their trade secrets... 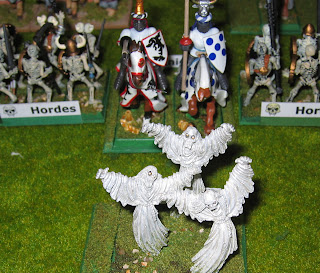 Meanwhile, things were going badly for the Cabal in the centre.  Knights broke through the ranks of skeletons and so terrified the ghosts that these sneakers fled off the table and were never seen again.  Surely that's the wrong way round!

Another one bites the Dust! 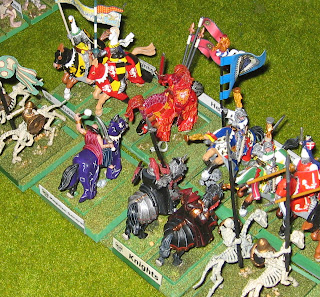 Back in the north wing, the forces of Lyonesse surged forward to avenge their fallen comrade.  The Red Knight challenged the Master Necromancer himself, but the titanic duel ended with him being ensnared in foul magics and transported away as a prisoner!  2 heroes down! 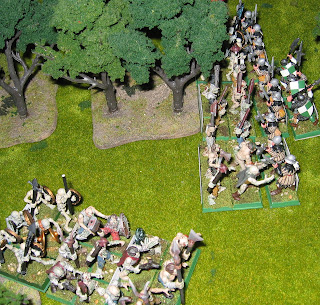 In the woods to the south, just beside the river, huge numbers of zombies clashed with a thin line of Lyonesse halberdiers.  Even though the humans were vastly outnumbered, the stout yeomen didn't give an inch and destroyed vast numbers of the undead.  But however many they killed,  more zombies appeared to replace the fallen... 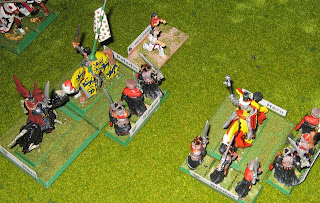 Nearby, Saint Florence of Artenay and Sir Roger the Castellan were caught unsupported by the opposition's undead hero and heavy infantry.  Sir Roger managed to throw his enemies back, but the paladin was wounded and immediately fled the field to seek penance in a hermitage.  3 heroes down! 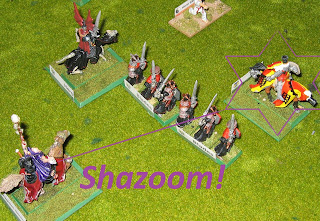 The loss of the paladin's spiritual protection left heroes in this part of the battlefield vulnerable to magic (Abbot Chao Kung, the cleric, was elsewhere).  It wasn't long before the warlock in charge of this part of the Cabal's army targeted Sir Roger.  He entranced the hero with visions of delight, causing him to fall captive to the forces of evil.  4 heroes down!

The Beginning of the End 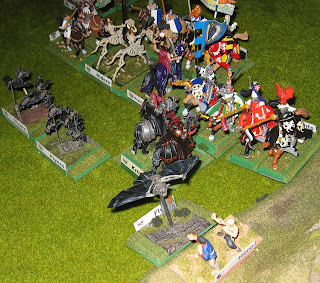 Back in the north, both sides were reeling from their losses and close to breaking.  Even though he was in danger of being surrounded, the Necromancer fought in the front rank and managed to destroy a stand of knights.  This pushed the opposing forces of Lyonesse over the edge and they turned and fled.

The Necromancer's joy was short-lived, however.  Lin Jie appeared, seemingly from nowhere, and leaped off the hillside to tackle the big bat.  He felled the beast with one mighty blow; this was enough to break the Necromancer's force as well! 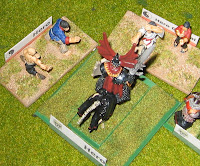 Lin Jie then raced back to the centre of the field (heroes can move a long way in HotT!), where he was credited with an assist as Li Feng took on a mighty undead lord.  Between them, the village heroes destroyed the wight and scattered his bones.  The central Cabal army then collapsed.  Some elements fled immediately, while others lost their animation and stood rooted to the spot, only to collapse into dust when approached by any of the peasants. 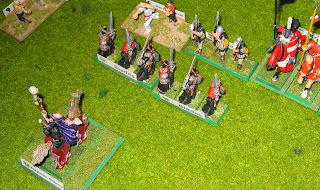 2 of the 3 commands from the Cabal army were now broken.  Only the warlock in the south remained, but his forces were scattered.  Zombies were still roaming the woods and tussling with Lyonesse halberdiers, but they were too far away to support the remaining heavy infantry.  With enemies approaching from 3 sides, the warlock decided to retreat.  He'd have to get his revenge some other day!

Man of the match

Lessons to be learnt