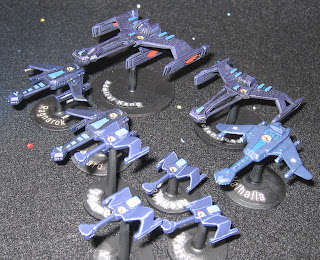 I've written posts about my "not-Federation" and "not-Orion" Star Trek fleets.  Well, today it's the turn of the Klingons.  These are quite unusual amongst my fleets, as not all the ships come from the same manufacturer.  I've used Studio Bergstrom for the largest and the smallest models, while the medium-sized ones come from Irregular Miniatures. 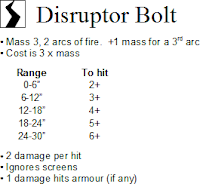 Rather than basing the Full Thrust designs on one of the existing Fleet Books, I started from scratch for this fleet.  My Klingon ships are fast, but have only moderate protection.  They have a varied array of medium and light beam weapons with wide arcs of fire (they'll almost always be able to fire something at you, if in range).  The signature heavy weapon is the disruptor; this is not a standard Full Thrust weapon so I've used the stats described by Star Ranger on Starship Combat News.

This is a relatively small fleet, for now.  I painted the models at widely different times; it was very difficult to do the colour matching between the older Irregular vessels and the newer Studio Bergstrom ones.  Having said that, the pictures seem to show much more variation in colour than is present on the actual models.

I'm completely missing any destroyer-sized ships from this collection.  To fill this gap, I might even have to buy some of the official Star Fleet models, either from Mongoose or Amarillo Design Bureau!