TRWNN: Taking out the trash!

Near the small town of Coyote Canyon, an illegal logging settlement has sprung up.  This is now populated by ruffians and other bad sorts, to the extent that decent folk are afraid to venture near it.  The sheriff won't do anything about it, so some of the town's slightly-less-than-upstanding citizens have decided to take the law into their own hands and clean out this nest of vipers! 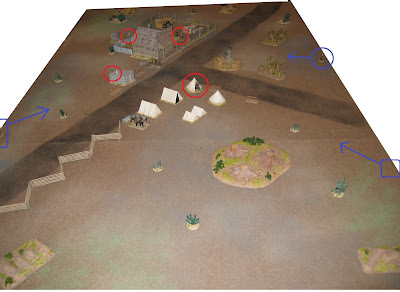 At first glance, this was a straightforward, 2-sided battle with no holds barred.  However, I wanted to add a bit of confusion (as normal, muahaha!), so I came up with the following twist:
Technically, all players could collaborate to share a major victory by agreeing with each other that one faction would shoot and the other would run away or surrender.  But even if they'd thought of such a pact, what's the chance of it holding?

There were 5 players, so we had 5 townsfolk characters and 5 squatters.  Note that I've not listed every weapon and skill for each model, just the ones that made more impact on the game:

As soon as he got a turn, Jesse advanced slightly, challenged and shot down the surprised Injun Joe.  Both of these characters were controlled by the same player, so right from the start he was banking on the townsfolk winning the game! 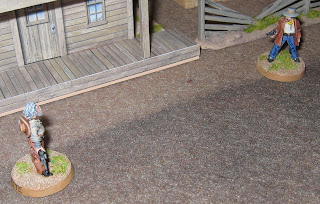 Despite his advanced years, Old Pete ran along the road like a young deer, only stopping when he came close to Black Bart.  However before either man could move, Preacher Adams decided to act (he was dealt 3 action cards plus his own character card and used these to take 4 turns in a row!). 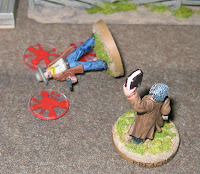 The preacher walked purposefully in from the side, never hesitating until he was close enough to Black Bart to smell the sweat.  As he raised his sawn-off shotgun, he was suddenly assailed by terrors and started to shake with fear ( the 'crazy as a loon' attribute kicked in and the preacher was determined to be 'yellow'.  It probably didn't help that Black Bart had the 'terrifying' attribute as well).  Even so, the preacher blasted away with his gun and scored 3 flesh wounds on his enemy (Bart's 'tough' attribute cancelled out the +1 damage for a shotgun at point blank range, but he still took some serious hurt). 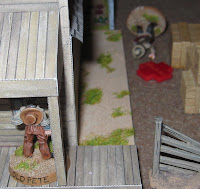 Old Pete ignored Black Bart as he struggled to regain his feet and run away.  Instead, the townsman stuck his head round the corner of the trading post and shot Rico in the belly, leaving him sprawled and unconscious on the ground. 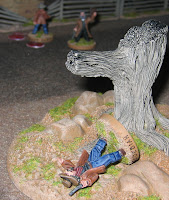 Jebediah tried to creep up behind Preacher Adams, but the crazy man was too fast for him and spun round.  A shotgun blast forced the squatter to take cover behind the old hanging tree, though the range was too long for it to cause any real injury. 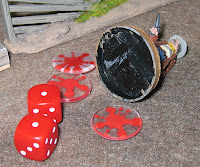 Having managed to stand up, Black Bart attempted to flee.  However, his injuries were too much for him and he collapsed back down to the ground.

So far, everything had been going the townsfolk's way.  They'd killed 1 opponent, seriously injured 2 more and scared a 4th, all for no harm to themselves.  However, it wasn't to last: 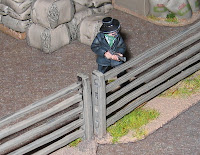 Emmett finally woke up to the fact that his camp was being raided.  He walked up to the fence which surrounded the trading store's yard and took several deliberate shots at Preacher Adams. 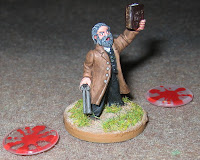 First he shot the preacher in one arm, then he carefully shot him in the other one.  This was too much for the minister; he turned and fled. 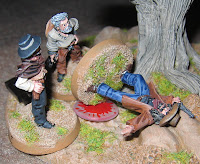 While this was happening, Jebediah was attacked, initially by Old Pete and then by Blondie as well.  Between them, they beat up the squatter until he begged for mercy, whereupon Old Pete tied him up.  I suspect there will be either a lynching or a tarring and feathering later on! 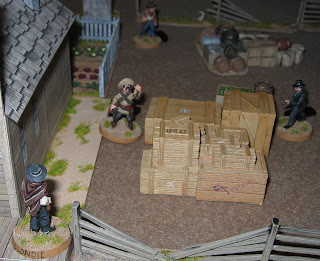 The badly wounded (and drunk) Rico finally recovered consciousness and stood up groggily.  As he did so, Blondie came round the front of the store and Jesse approached from the rear.  Emmett, having seen off the preacher, positioned himself behind some crates and exchanged a few shots with the latter. 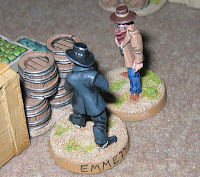 Jesse was too impatient for gunplay, however.  Relying on his strong attribute, he charged at Emmett, fists whirling. 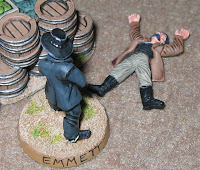 The townsman had badly misjudged the calibre of his opponent; the legend was quite capable of defending himself in a brawl.  Emmett gave Jesse a tremendous whack with his pistol butt that dropped the attacker on the spot, dead! 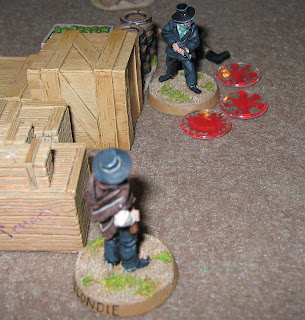 Blondie also fancied his chances against the squatters' hard man. Ignoring the stumbling Rico (despite his drunken threats), Blondie moved up and shot Emmett multiple times. 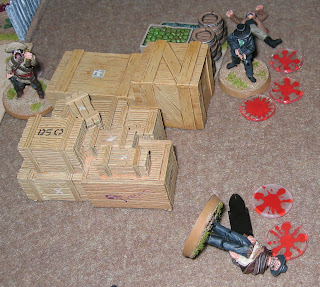 When the smoke cleared, Emmett was still standing, though bleeding from several flesh wounds.  He returned fire and this was much more effective: Blondie went down, unconscious and badly injured. Seeing his hero fall, Kid Sheleen ran towards the enclosure with both guns blazing.  Rico tried to line up a shot on the youngster, but went down with a bullet in the head. 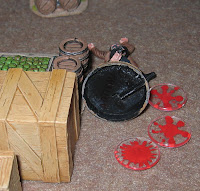 Next, the Kid blasted away at Emmett.  Improbably, he hit the outlaw in the head, killing him instantly and thereby pulling off an extraordinary victory!

Clearly, the townsfolk have the victory, though a somewhat Pyrrhic one.  Of the townsfolk, Old Pete and Kid Sheleen are the clear winners, with Blondie and Preacher Adams gaining only a marginal claim.  Sadly, the player in control of Jesse (who shot his other character, Injun Joe, right at the start) loses completely.  Better luck next time!