Full Thrust: Return of the Spider! 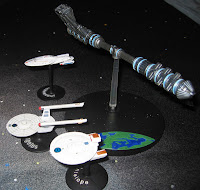 Some time ago, I published a scenario entitled 'Arachnophobia', about an alien race of bio-ships with unknown motives invading a Federation star system.  This was, I thought, quite an interesting challenge for both sides, but 2 things didn't go quite right:
So, I thought it would be interesting to refine the rules a little and replay the scenario.  I present to you: Return of the Spider!

For the most part, the scenario works as before.  Here are some adjustments to the intruder's special rules, though:
Well, I'm not completely happy with these, but let's see what happens.  On to the game! 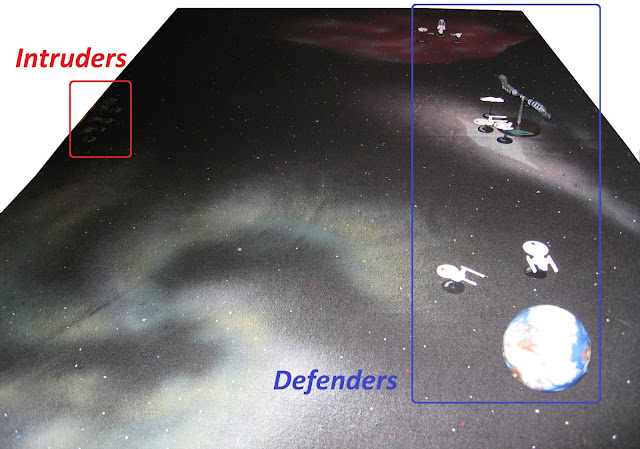 For this game, I played the Sa'vasku intruders and my sons took the defenders.  They chose a slightly different mix of ships in the Federation fleet from the previous game, with a wider range of sizes and capabilities.  The heaviest unit was the battlecruiser Invincible, stationed near the planet.  Assisting the distressed freighter were the frigate Trout and the corvette Betelgeuse.  Various light cruisers and destroyers made up the rest of the defending force. 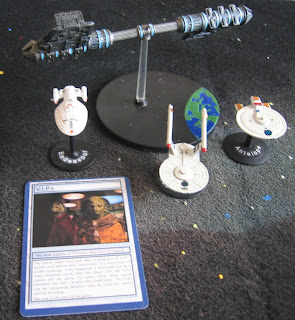 Straight away, before the first turn, I played a "V.I.P.s" card on the opposition.  There were some important alien guests visiting the Caledon system; the Federation players decided that they were currently on the M.D.B. Space Factory.  Although this facility was only lightly protected, it was extremely massive and would give them many places to hide, should the worst happen and the intruders attempt to take hostages! 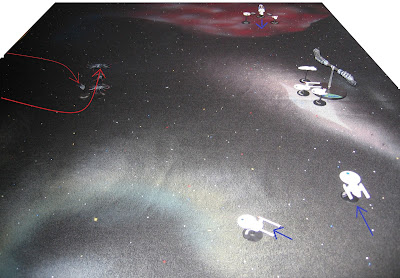 For the first couple of turns, the Sa'vasku intruder ships performed a series of high speed passes and turns, showing off their extreme maneuverability and attempting to confuse the defenders. 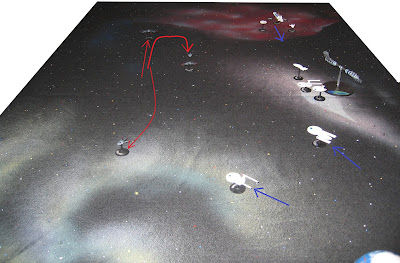 The Federation battlecruiser and one of the light cruisers approached cautiously, while most of the rest of the fleet moved only very slowly, unsure how to react.

While they were trying to make up their minds, I played another event card.  This was a busy day in the Caledon system, as a previously undetected comet suddenly appeared.  I was hoping that it would hit the space factory or the bulk freighter (neither of which had much capability to dodge); at least the comet did appear on the Federation side of the table. 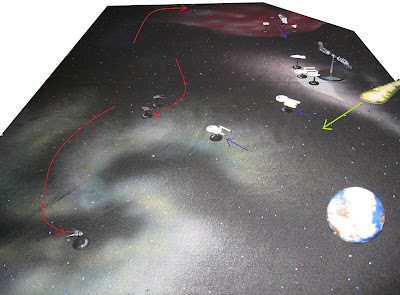 Sadly (for me, at least!), the comet missed all the Federation targets.  The Sa'vasku ships continued their high speed posturing, resulting in the 3 smaller ships heading for the planet while the battlecruiser Cisplantin was at the far end, approaching the spilled cargo from the freighter. 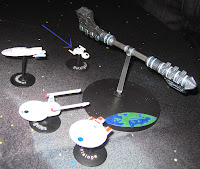 This was too much for the Federation admiral.  The corvette Betelgeuse was ordered to transport the V.I.P.s off the space station and take them safely away, warping to another star system if necessary.  No doubt the alien dignitaries weren't too happy about being hustled onto an uncomfortable little ship and taken to who knows where, but Starfleet security personnel were very insistent! 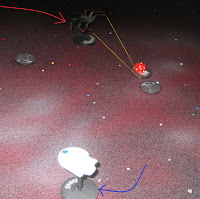 At the far end, the frigate Trout was the only Federation vessel nearby as the huge alien battlecruiser started to cut up the precious spilled ore with pulses of fire from its stingers. 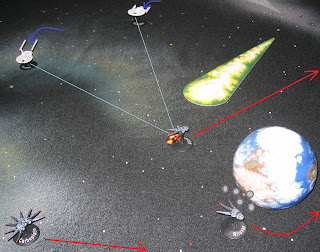 At the same time, one of the younger Sa'vasku ships (Rituxan) reached orbit around the planet of Caledon.  It started to lay eggs, while the larger cruiser Carboplatin approached not far behind.
"Right, that's it.  We've been patient enough!" snapped Admiral Jeffries.  "All ships, open fire - nearest targets.  These guys don't want to be friends!".
The Invincible and the Toronto immediately targeted the other small intruder (Zofran) and, despite the range, hurt it quite badly.  The startled Zofran was already traveling fast; it now fled at top speed and vanished into the night! 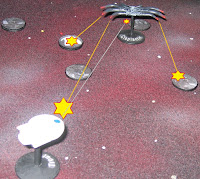 Near the debris field, the Trout nobly obeyed orders and fired on the Cisplatin.  The frigate inflicted only a minimal amount of damage, then sat back and waited to be annihilated.  The great beast was focused on splitting open rocks to look for the munchy bits inside, but it did divert some of its energy to swatting the small Federation vessel.  Trout survived the Sa'vasku ship's return fire, but only just - her life support was failing and the ship-wide intercom was stuck on high volume (see non-critical hits).  Her captain ordered the now-deafened crew to abandon ship, hoping that the alien star-creatures didn't eat escape pods! 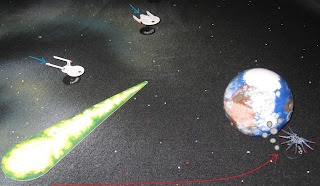 The Federation heavy units tried to catch the Sa'vasku cruiser, but were frustrated firstly by the comet  and then by the planet - they couldn't get a clear shot at the intruder.  Carboplatin used this opportunity to brush the planet's atmosphere, laying eggs as it went! 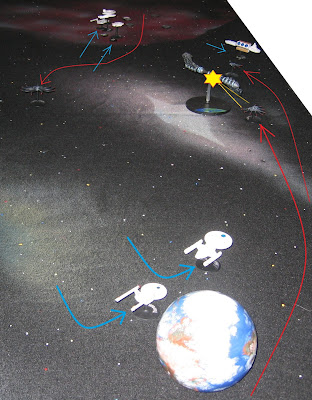 After spawning, the Sa'vasku cruiser and destroyer accelerated out of orbit and raced towards the MDB space factory, leaving the Invincible and Toronto struggling to keep up.  As she passed the station, the aliens fired upon it - doing moderate damage and (more significantly) hitting with a couple of the dreaded leech pods.  Both leeches then gnawed on the factory for several rounds before being hunted down and dispatched by factory workers with improvised weaponry.  This was more a means of unsettling the Federation players, rather than a serious attempt to destroy the facility.  It succeeded admirably in that!

Near the spilled ore, the other Federation squadron attempted to confront the Sa'vasku battlecruiser, only to find that the beast had accelerated straight past them far quicker than they had imagined possible! 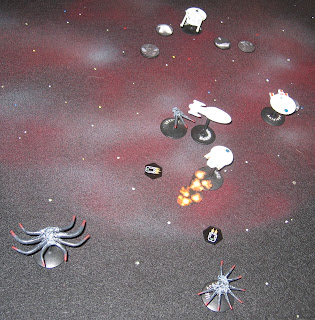 Now the lighter Federation squadron found itself in trouble, as all 3 remaining Sa'vasku pounced on them (the battlecruiser executed another extremely high-G turn).  Fortunately for the defenders, the bioships had spent a lot of their power on manoeuvering and so their firepower was light - this turn.  Still, enough damage was done to the Los Angeles to reduce her thrust; she actually had to fire on one of the rocks that was directly in front of her in order to scatter it and avoid a fatal collision!
Endeavour suffered the indignity of a non-critical hit on her grey paint locker.  The atomised paint was then sucked into the life support systems and sprayed as a fine mist over much of the ship's interior!
Not everything went the Sa'vasku's way, though.  Return fire from Federation vessels did serious damage to the second alien destroyer, Rituxan. 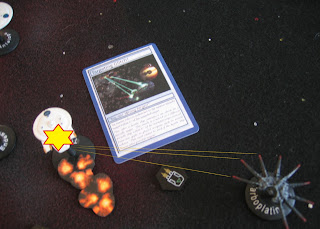 The next turn should have been the Sa'vasku's finest hour.  The cruiser Carboplatin diverted virtually all its energy to stinger weapons and aimed at the destroyer Antelope.  However, the Federation admiral played a quick Targeting Glitch card.  The massive salvo from the intruder was instead directed on to the stationary and abandoned frigate Trout!
The bioship had taken light damage from the Federation heavy units whilst racing past them at long range, perhaps this caused the problem.  Or maybe the animal was just tired after spawning - who knows?  Whatever the reason, the derelict frigate was completely obliterated by the misdirected fire, while the Antelope then punched more damage onto the hapless cruiser! 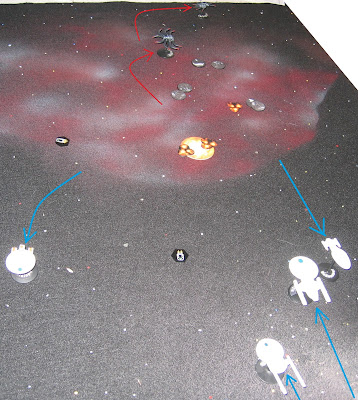 In the final moments of the game, the Cisplatin tried to return to feeding on the debris from the freighter's cargo.  It managed to consume 1 rock, but was moving too fast and in slightly the wrong direction to be able to overrun any others.  The damaged Federation light cruisers and destroyer were fleeing, but the almost untouched Invincible and Toronto were approaching fast.  Weighing up the odds, the Sa'vasku battlecruiser gave a metaphorical shrug as it accepted that it and its consort cruiser wouldn't be left to their meal in peace.  Instead, the 2 remaining bioships used their superior speed to race off the board and out of reach of the human ships.

As the Sa'vasku player, I tried to draw the Federation fleet away from the spilled cargo that was my goal.  In this, I was partly successful, but at very high speeds it was difficult to manoeuvre so as to scoop up the small, tasty chunks.  At least all my ships escaped in the end, though the smaller ones were quite badly damaged.

The Federation were indeed confused by the intruders' antics.  Indeed, they may have been too confused because rather than attempting to chase the Sa'vasku ships, many of their vessels simply sat still and waited for something to happen.  This made it relatively easy for them to reinforce any given area, albeit after a slight delay to build up speed.

Moving the party of alien V.I.P.s onto the small police corvette was probably a big mistake.  The Sa'vasku could easily have targeted this ship before she reached safety.  Even though the range would have been long, the corvette would have been very easy to destroy or cripple.  However, I played in character - the intruders had no interest in the small lifeforms - and let them get away unharmed.
Posted by Colgar6 at 07:09