Some time ago, I became interested in the SAGA rules by Gripping Beast/Studio Tomahawk.  They seemed to fit my idea of a quick, fun, narrative game very well.  Despite not knowing anything much about Dark Ages warfare, I ordered myself a 4pt starter warband of Vikings.  This was back in February 2011, so about 2.5 years ago!

I painted up the Vikings quite quickly (for me) and in 2012 I ordered a Scots warband as well so that I could field both sides and actually play the game.  These have taken me much longer to paint, though I'm making some progress now.

In order to try to keep my enthusiasm going, I thought I'd show my Vikings today and see what all my readers think of them. 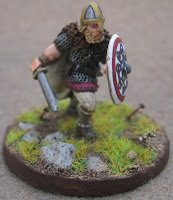 Here is Leif Gunnarson, the leader of this small band of raiders (and yes, I do see this warband as raiders rather than as settlers, merchants or anything else). 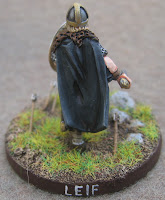 Someone has been shooting arrows at him.  That's just not on; I think he's in a hurry to show the perpetrator how a real warrior fights! 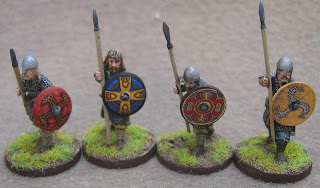 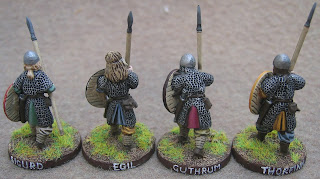 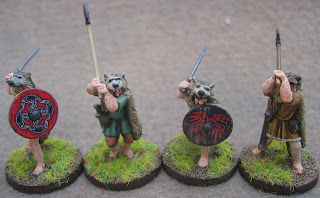 Whether historically accurate or not, these frothing, unstoppable fighters are colourful for SAGA.  They certainly make the Viking warband a little different from any other force! 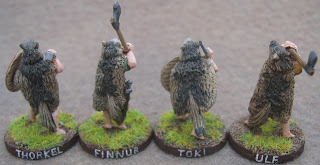 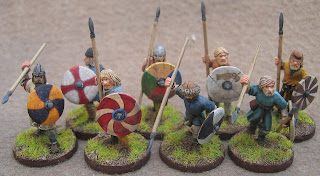 The less well-off members of the band aren't as heavily equipped, but they're still good at fighting. 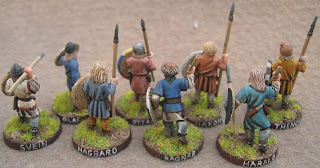 Typically, they don't have a sword or armour.  Only a few have helmets. 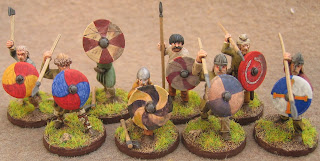 They're more numerous, mind!  Each warrior has a sturdy spear or axe and a big, round shield. 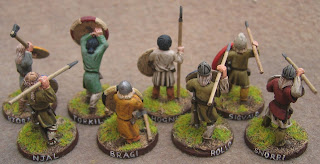 So there we have it: 4pts of Vikings.  I'm probably 1/2 of the way through painting their Scots opponents; if I can keep up the current flow then another month should see them finished.  Then I'll have to see about setting up a game...

Of course, by the time I'm finished I'll probably find that everyone else has moved on to something else that's even more "shiny".  Ronin, anyone?