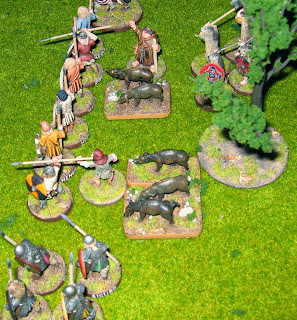 For my second ever game of SAGA, we chose to play "The Escort" scenario from the main rule book.  My Vikings, laden with plunder, would try to escape past my son's Scots.  In the previous game, the Vikings had done quite badly.  Could they improve their performance now?

Both sides would have 4 points worth of troops.  Although I now have 6 points of Scots painted up, the Viking force is the smaller and this limited the size of battle we could put on. 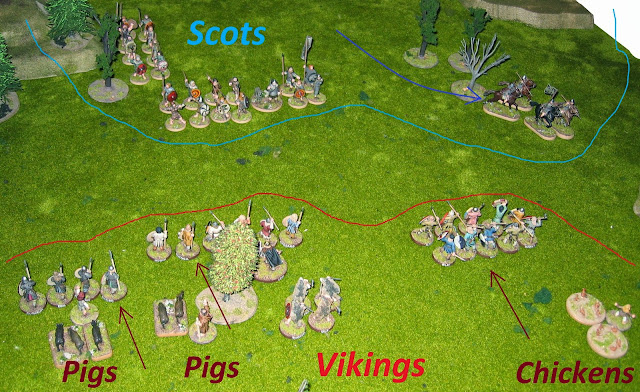 The Vikings deployed both sets of pigs to one side, but the chickens were placed a long way off.  Since I only needed to get 2 of these 3 off the board in order to win, I regarded the chicken flock as a decoy.

Sure enough, in the opening moves the Scots cavalry tried to race round the far flank whilst most of the Vikings just advanced steadily. 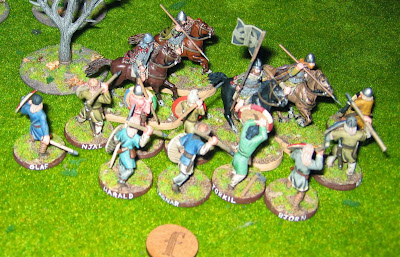 Hmm, we're not having that!  Using the power of Frigg and of Thor, the large band of Viking warriors ran towards the Scots cavalry and forced 2 rounds of combat. 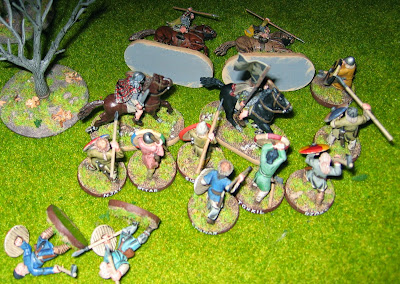 When the dust settled, 2 were dead on each side.  I'd hoped to wipe out the cavalry, but their defensive tactics compensated to some extent for being so heavily outnumbered.  Oh, well - 2 thanes for 2 warriors is still a good exchange. 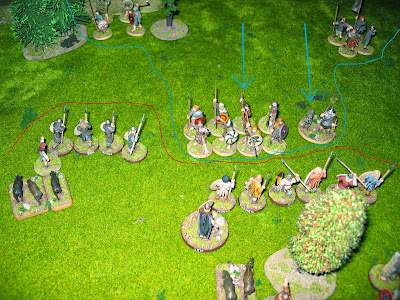 Dismayed at the partial destruction of his mounted force, MacBheatha advanced towards the Viking lines with just a single body of spearmen to accompany him. 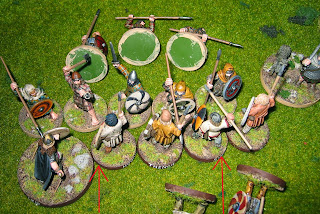 The Vikings were quick to take advantage of this splitting of the Scots force.  Leif Gunnarson grabbed the nearest group of warriors and charged with them into the opposing line.  Again, the Scots braced themselves defensively, but they still lost more figures and had to give ground. 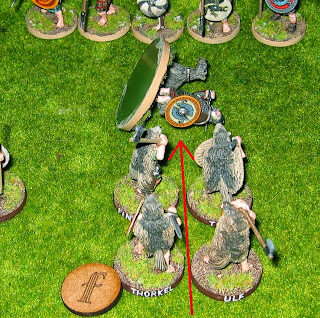 This left the Scots warlord, MacBheatha, somewhat exposed.  With a guttural roar, the Viking berserks ran from the back field and attacked him...

Needing '5' or '6' to hit, the berserks threw an astonishing number of attack dice and scored many, many hits.  Even though MacBheatha had braced for defence, this was an unstoppable charge.  The Vikings cut him down, howled like animals and then danced on his body. 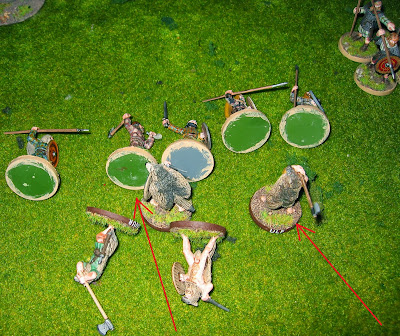 The frothing madmen didn't stop there, either.  Ignoring their fatigue, they charged on into the falling-back unit of Scots warriors.

Once again, the berserks obliterated their foes, though this time they took a couple of casualties due at least in part to their tiredness. 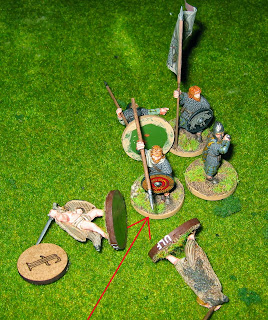 And still they weren't done!  With a last burst of energy, the remaining 2 berserks charged the small unit of thanes in the rear centre.  These armoured Scots were too tough for the exhausted Vikings though; they cut down the berserks, though not before one of their own had fallen.

Meanwhile, back at the chickens... 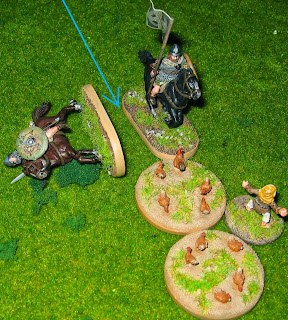 The remnants of the Scots cavalry finally stirred themselves.  They avoided the large band of Viking warriors who had attacked them before and headed for the chickens, determined to prove their valour.  Sadly, even this was too much for them as one of the horses was startled by a flapping fowl and threw its rider. 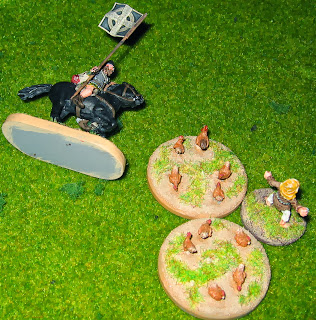 The remaining mounted thane attacked again, but this time the little boy guarding the flock threw a stone and hit the hearthguard in the face.  He, too, fell off his horse and was out of the fight.  Hmm - 2 hearthguard beaten by a baggage unit!

There were now only 2 Scots units left: a group of 7 warriors blocked the path ahead and the remaining 3 (foot) thanes were off to one side. 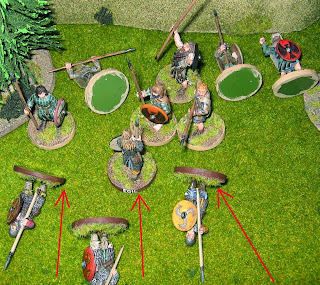 The warriors were pummelled, first by the Viking Hirdmen (3 casualties to each side)... 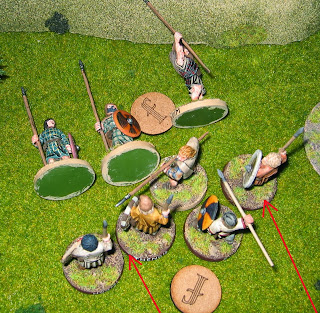 ...then, after that attack failed, the Viking warriors in the centre had a go (3 for 0).  This left a single Scots spearman retreating through the trees. 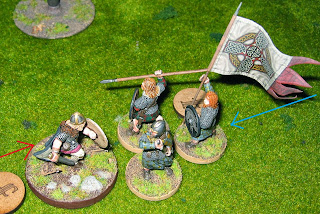 In desperation, the remaining 3 Scots thanes approached from the flank.  This time, Leif Gunnarson decided to take them on himself.  A fresh set of Saga dice on the battleboard gave the Viking warlord a number of advantages as he charged the dispirited Scots and felled all 3 without even taking a scratch himself.  If only there had been a bard nearby to record such prowess! 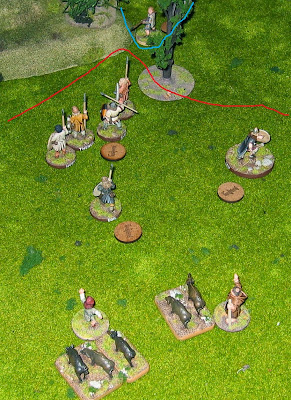 Sensibly, the last remaining Scots warrior slunk away behind the hill rather than face the raiders on his own.  The remaining Vikings carried on their journey towards where their ship was awaiting them, tired but happy.  At least on this occasion, they'd be bringing home the bacon!

That was brutal!  The Scots were almost always on the defensive, mostly swapping attack dice for defence dice to try to stem the flood of casualties.  This certainly slowed the casualty rate, but it seemed that they just never had a decent chance to counter attack.  As for losing 2 hearthguard to a flock of chickens - that's just embarrassing!