Today's post will be a short one, as I have only a single model to show.  He's a conversion from one of the 28mm Human Biker Gang figures from Westwind Productions.  These models are potentially very useful as there aren't many bikers on motorbikes available in 28mm, though there are plenty of such figures on foot.

However, the Westwind models are a real pain to assemble.  I've had to do quite a lot of work to make the separate arms and bodies fit together (and to hold on to the bike at the same time!)  This is well documented else where, so let's move on. 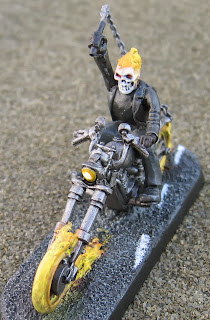 Having already put quite a lot of time into this model, I decided that it would be worth the extra effort to convert it into something special.  I had vague memories of a superhero/villain who rode a flaming motorcycle (I'm not really a comic book geek), so a little research led me to my version: The Demon Biker. 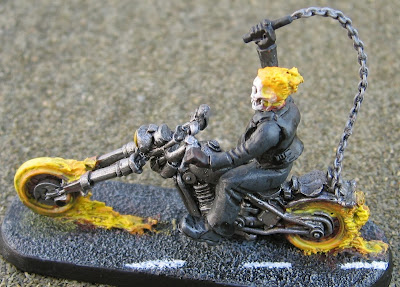 I added a bit of green stuff to the wheels and head in order to make the flames.  This wasn't at all hard, though I think I did a better job on the tyres than the person.  Rather than use one of the supplied (human) heads, I substituted a metal skull that I had in my spares box.  I had to build a bit of neck for the skull to sit upon, but again it wasn't much effort. 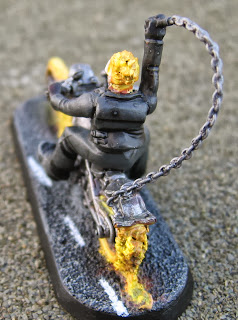 For the right arm, I carved away the existing weapon and drilled a hole for the haft of the "whip".  The handle was just a short length of plastic rod.  Surprisingly, the most difficult part was obtaining the chain for his weapon.  It took me many months of searching before I discovered that really fine chain was stocked by Hasslefree Miniatures, hidden under their "Accessories...Steampunk Stuff" category.  Once I had fixed the chain in place, I coated it liberally with super glue to make it hold in the right position.  Nevertheless, this may be a weak point on the model and I'll need to be careful not to collapse it with excessive handling. 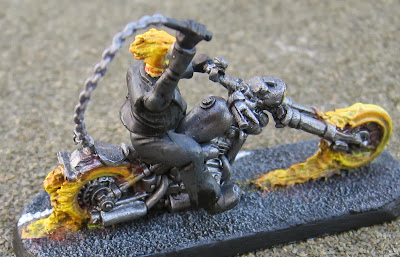 Painting the main part was straightforward.  The bike was done in gunmetal and the rider in dark grey (2 or 3 different shades, depending on the piece of clothing).  Then I washed the entire model with black.  After all, most of this model is intended to sink into the background, so it shouldn't have a lot of detailing.

The flames were a different matter, however - they really had to draw the eye if the model was to work.  I spent a lot of time working up from reds and oranges through to pale yellow.  I'm still not really happy with the outcome, though I've given up tinkering in case I make things worse! 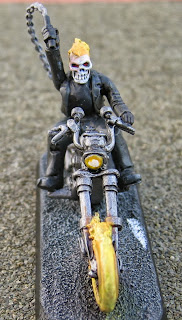 So, how will I use this model in a game of All Things Zombie (or indeed in any other game)?  I've no idea - but it must be possible!  Is he a force for good?  A damned soul bent on fiendish destruction?  Or completely neutral and even-handed in mowing down anyone who gets in his way?  What are his powers and motivations?  Does he have any vulnerabilities or weak spots?
Posted by Colgar6 at 15:09

Email ThisBlogThis!Share to TwitterShare to FacebookShare to Pinterest
Labels: ATZ