It's the 4th and last week of Zomtober 2013!  Again, I've only just painted my figures in time, so they're a bit of a rushed job.  Still, better finished a bit crudely than never finished at all, right? 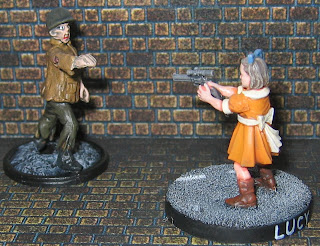 Today's duel is between a couple of rather small figures.  For the survivors, we have "Lucy", from Wargames Factory's "Survivors: The Women" kit.  She's just a little girl in her party clothes, but she's lifting up an enormous revolver.  It's got a telescopic sight on it, which seems pretty strange to me! 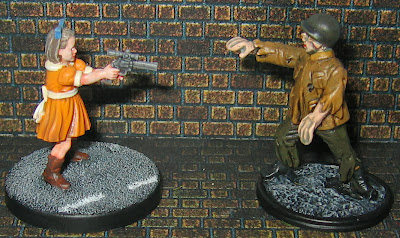 Facing her is "army zombie".  He's one of the models from Blue Moon Manufacturing's old "Things That Go Bump In The Night" range.  These figures tend to be a little smaller than many other 28mm figures, but even then "army zombie" is rather shorter than most of the other Blue Moon figures.  I'd say he was 26mm from base to eyes. 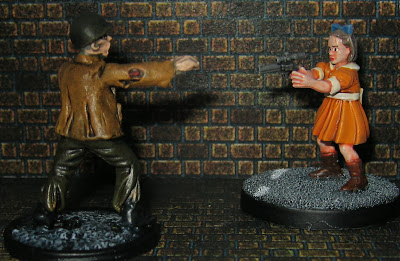 The Blue moon figures have substantial integral bases, so I've not rebased them (unlike all my other models).  This doesn't help with the height issue when the zombie is short to start with! 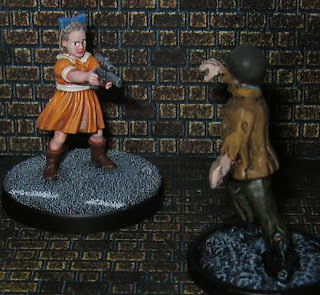 So, what's the story?  "Army zombie" is dressed in a rather old-fashioned uniform, so I don't think he's a member of today's military.  Perhaps this is set some 50 years ago, at the time of the Korean War?  Alternatively, maybe he's a WW2 re-enactor.  Given the height issue, I think it probable that he's just a teenager at that.

Lucy's gun is enormous and should easily be able to blow big holes in the zombie.  The real question is: can she lift it high enough and hold it steady enough to aim?  Even if she does shoot then I imagine the recoil will bowl her over, so she'd better make the first bullet count!

It's been fun doing Zomtober this year; I've certainly completed some models that would otherwise have languished for a long time on my workbench.  Thanks to the originators of the idea and to all those of you who have supported me and all the other participants throughout this period.
Posted by Colgar6 at 11:47