Today's post will be another short one.  It's grey and raining (again!), I have a headache and I'm just not feeling up to much.  So, while I try to regain some energy, here are some more recently-finished figures for ATZ or similar games...

First, here are a couple of variants of the "fat woman" body from Wargames Factory's female apocalypse survivors.  Josephine (left) is made up out-of-the-box, whereas Laura (right) has been converted by using different arms from another kit.  Laura's head is taken from the same sprue as the body, but it isn't one of the "official" head options for the fat body.  Still, it works well enough for me.

Next up we have a couple of sporting types.  Ricky is wielding a cricket bat, apparently with a lot of passion.  On the other hand, Kimberly is completely emotionless as she crouches, poised and ready with a tennis racquet.  Both are Wargames Factory figures.

An unlikely pair make up my last couple of survivors.  Tiana has been shopping and doesn't seem aware of any kind of danger, whereas Jimmy has found a sub-machine gun from somewhere.  I'm not sure he really knows how to use it, though.  Again, both of these figures are from Wargames Factory, though Tiana's shopping bags come from the female zombie kit rather than the female survivor set. 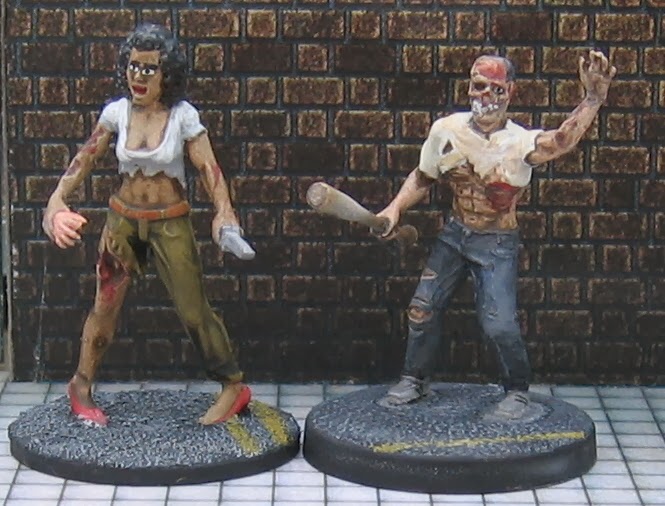 On to the zombies.  I decided that I wanted to have a few zombies with weapons to keep my players on their toes, so this pair are armed.  She is from Wargames Factory, whereas he is a Studio Miniatures model.  Both have weapon arms taken from one of the Survivors kits. 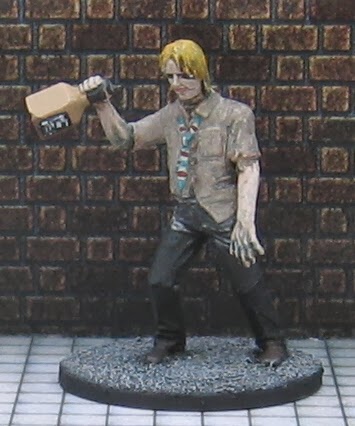 Finally, here's another Studio Miniatures model, though the bottle is from Black Cat Bases.  Is he a zombie?  Or is he just really hung over?  Would you shoot first or wait and see?
I'm not really happy with this guy's pose: the way the bottle is held looks odd to me.  However I have decided that I couldn't do much to fix it on this model.  Maybe some time I'll try the same concept again with a fresh figure and do it better.