Time for another game of The Rules with No Name at my local club, this week.  Once again I was struggling to think of a decent scenario (Tuesday evenings come round frighteningly fast!), at least until my older son mentioned something.  I can't even remember what he said now, but it led down the classic Western route of a small band of heroes against huge numbers of bad guys.  So, how shall we do this? 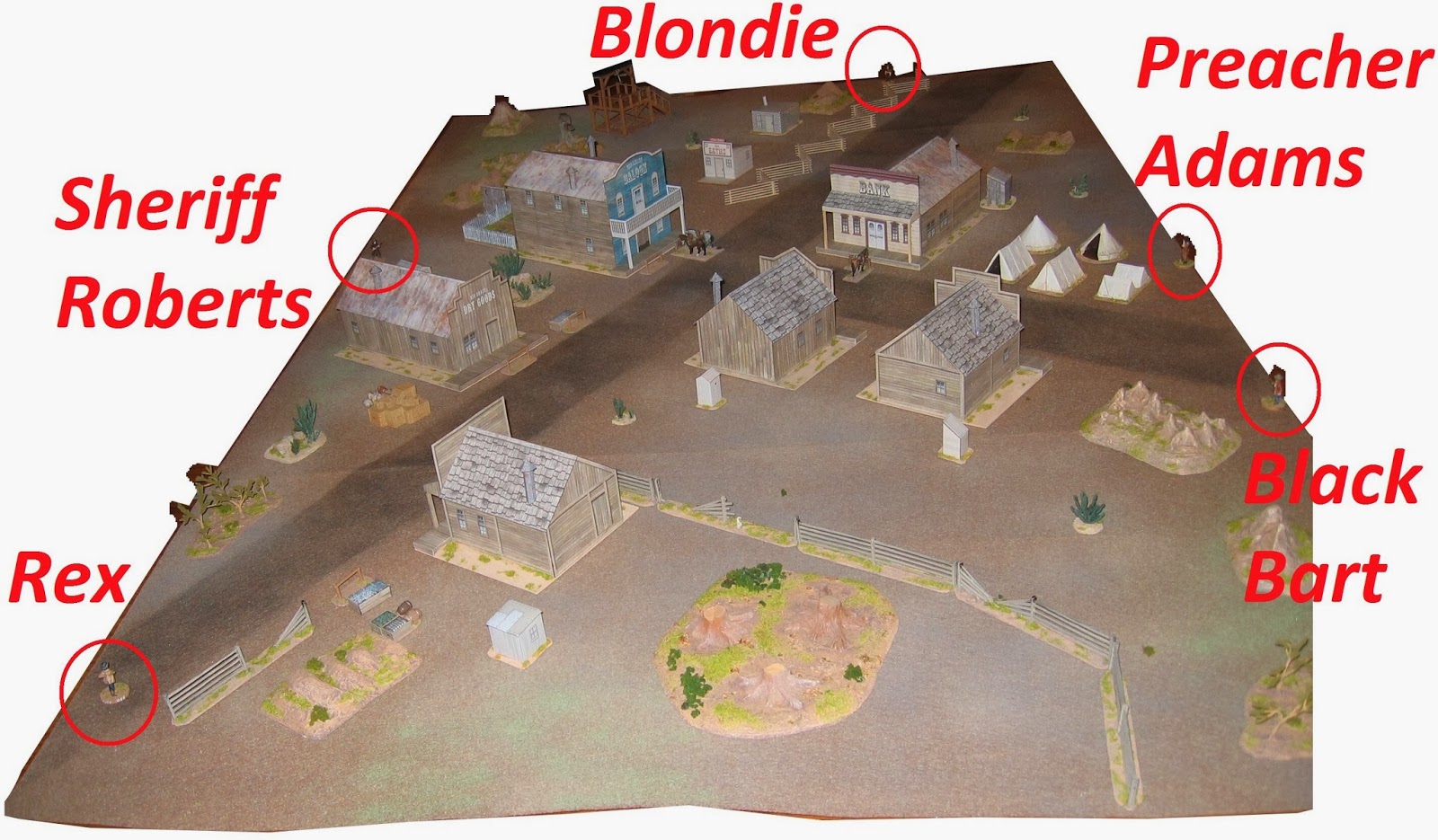 The small settlement of Los Lobos has been overrun by banditos.  However, all is not lost: a small band of mercenary Americanos have been engaged to take on the bandits.  It's a matter of honour to them not to accept defeat, so they must succeed in destroying all the bad guys and freeing the town!

In this game, each player would take one of the Americanos.  As umpire, I controlled all the banditos. 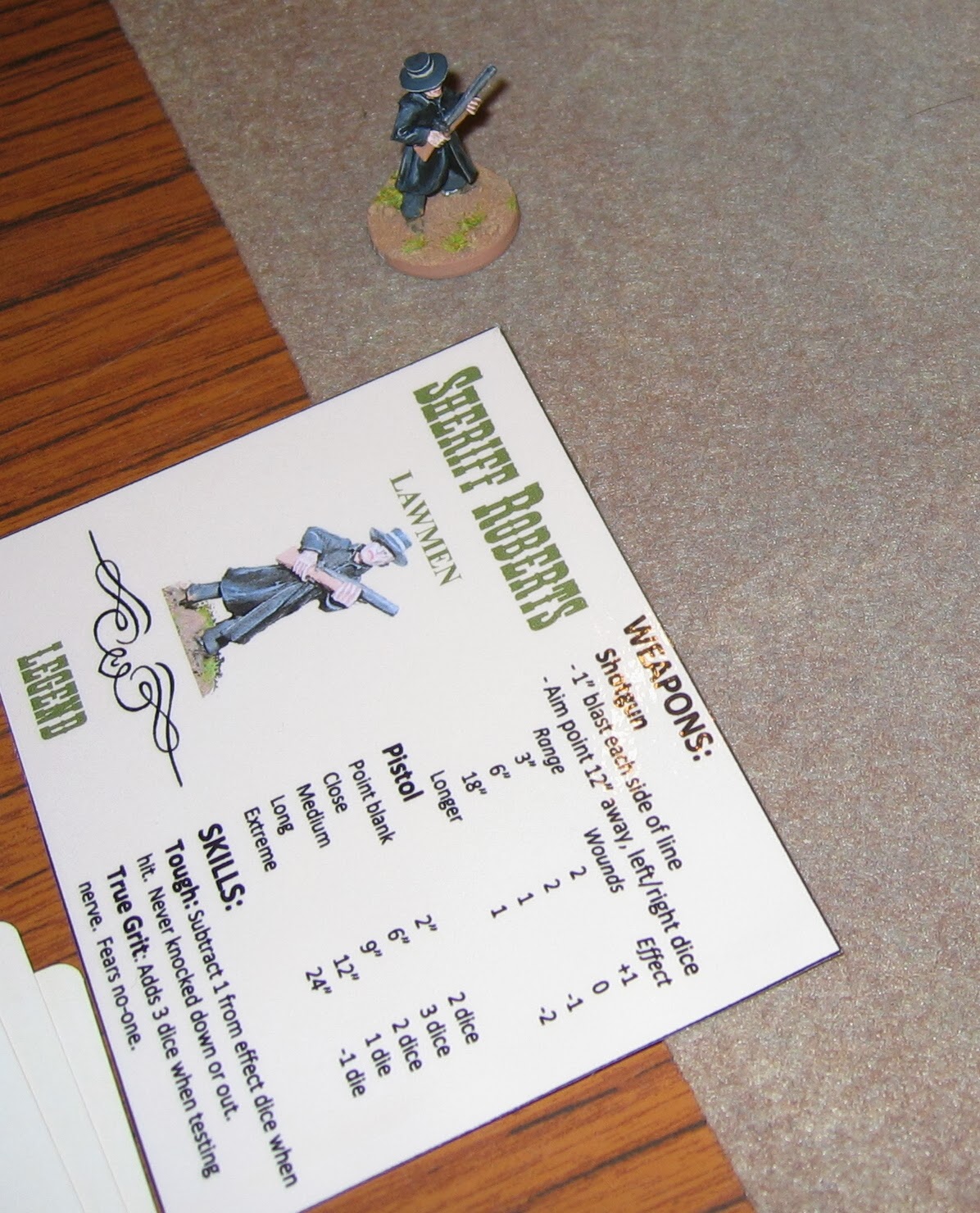 The Americanos have a small number of elite gunslingers.  For my game of TRWNN, they were all Shootist or Legend class and had a variety of skills and weapons.  Since we had 5 players, there were initially 5 models, though we had another 2 figures in reserve (in case of early casualties, so that none of the players would be reduced to spectators for most of the evening if their model was shot).

Because they're attacking the town, the Americanos may deploy on any edge of the board.  They must cover all sides of the settlement (i.e. they're not allowed to just walk down main street in one large mob!).  I told the players that the banditos would win instantly if even a single bandito managed to run off any edge of the table and escape.  This wasn't actually their victory condition, but it did encourage the players to spread their forces about.

The banditos were all Gunman or Citizen class.  I was planning to have their Legend leader arrive late, but we ran out of time before this happened.  Oh, well.

Initially there would be 4 banditos on the board.  Each time the Bystander card was drawn from the Fate deck, another bandito would arrive as a reinforcement.  Since there were 6 buildings on the table (excluding small sheds, privies, tents and the like), a dice would be rolled and the bandito would emerge from that building.  If an Americano had "searched" the indicated building by spending an action to look through the door then the dice would be re-rolled.  Dead banditos would be recycled as reinforcements when necessary, thus providing a potentially endless supply of bad guys; this would only be limited by the available playing time!

Because of the "all or nothing" nature of the game and the potentially large number of figures, we wouldn't use Nerve tests.  The Americanos are simply reckoned to pass, always.  Bandito Citizens will faint or run away after a single wound (assuming it doesn't kill them anyway!), whereas Bandito Gunmen will automatically be out of action if they take any 2 wounds (or a single Dead, of course).

For the banditos, this was simple: kill all of the Americanos!

I didn't really think too clearly about the victory conditions for the attackers.  Obviously I couldn't make it "Survive until the game ends", as this would have led to all the heroes just hiding!  Possibly it could be "kill at least 10/20/30 banditos"?  Or maybe it should have been "Search every building" (thus preventing any more enemy reinforcements)?  On the evening, none of the players actually asked what they needed to do in order to win, so I guess it doesn't really matter.

One thing that is important: they all win or lose together.  Even players whose characters are dead can still claim a win if the group is successful!

As might be expected, there was no coherent flow to this game.  Rather, it developed from very early on into a series of small encounters and vignettes.  Here are some of the more memorable moments: 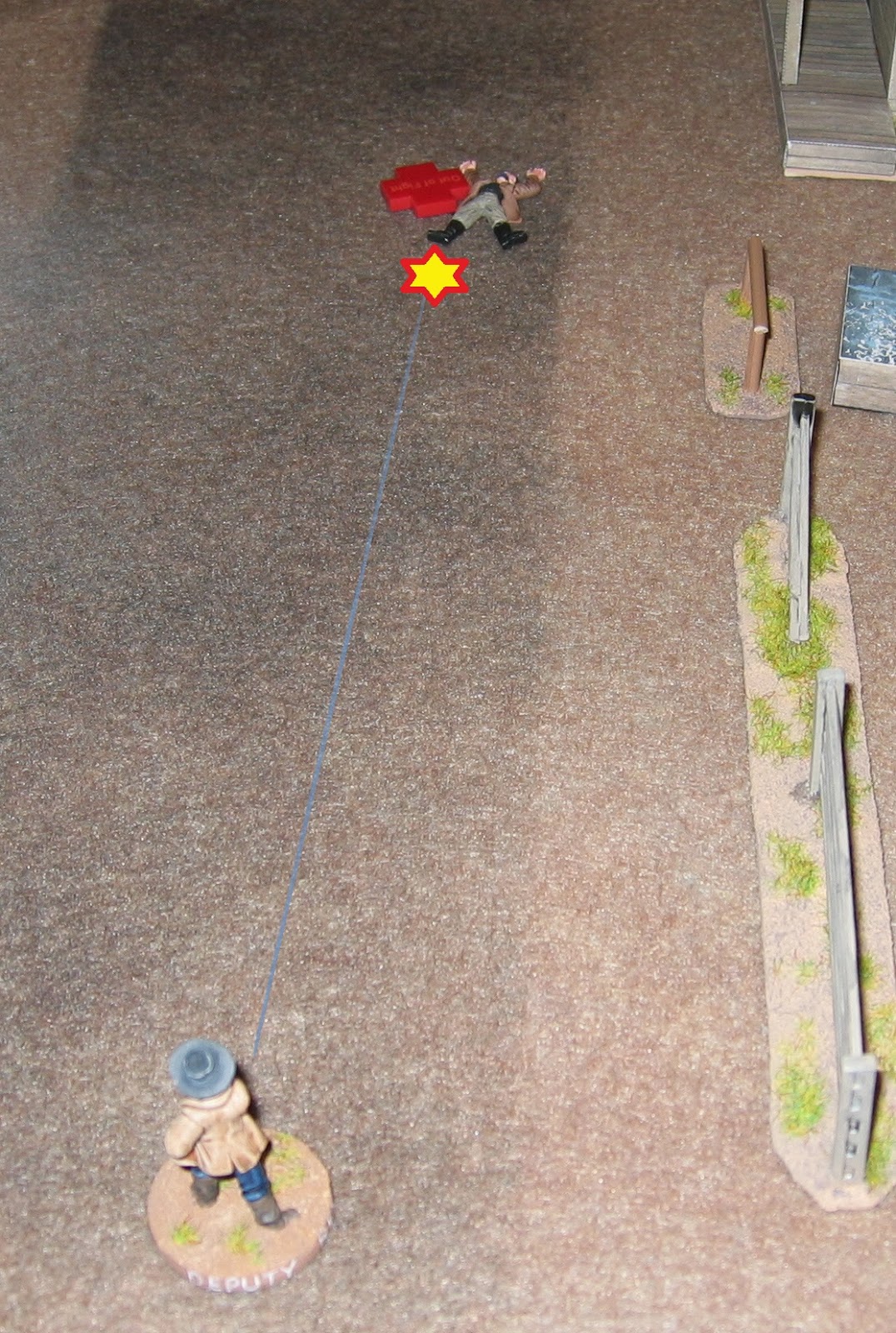 First blood went to Deputy Rex.  A hapless bandito stumbled out of the nearest house, fell over his own feet, stood up again and was then shot by the waiting Americano. 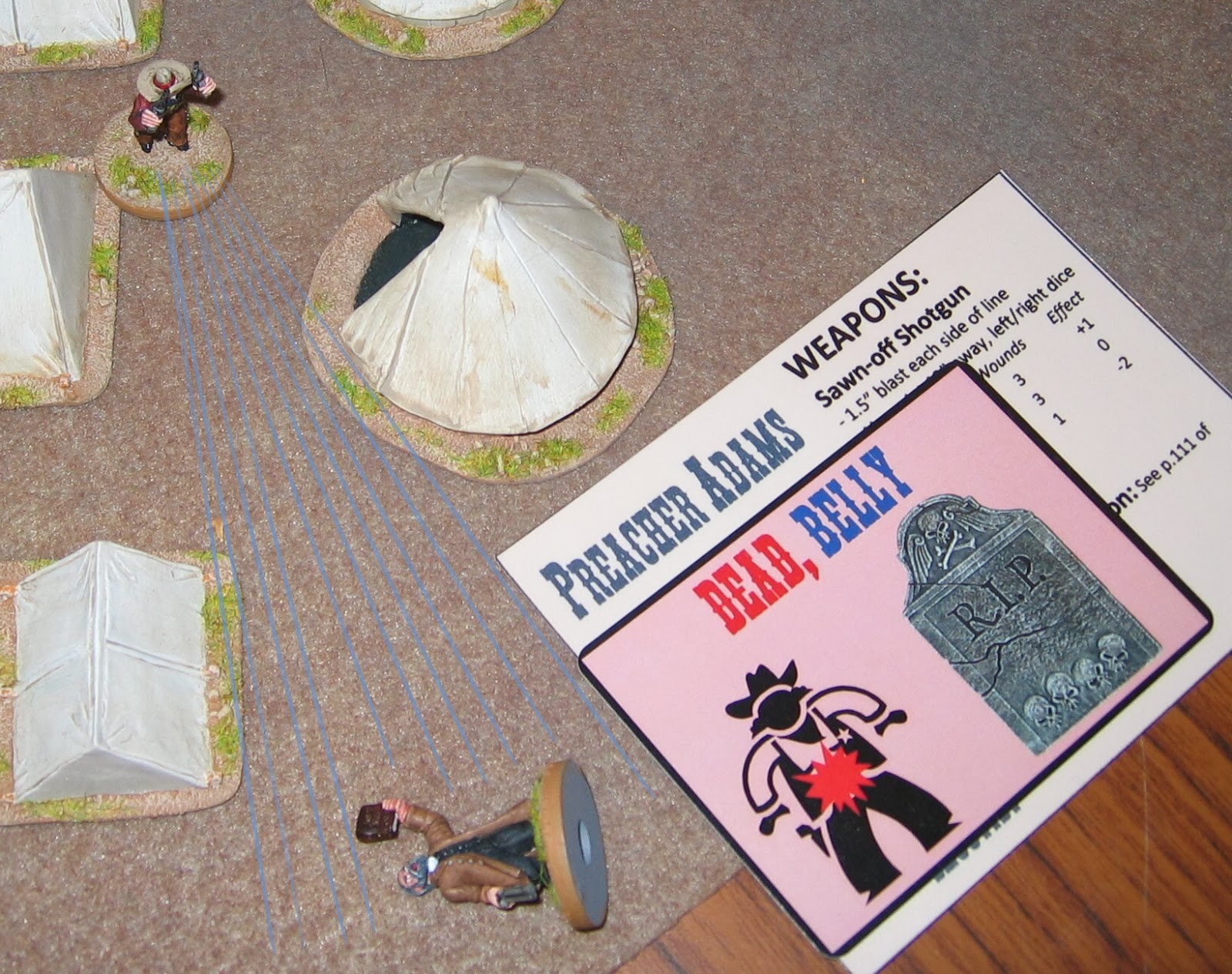 Retaliation was swift, though.  2-gun Rafael dodged through the tent city and blazed away at Preacher Adams, before the preacher even had a turn.  Only 1 of Rafael's many bullets actually hit the Americano, but it was enough to kill him.  Adams was replaced by Jesse as the 6th Americano. 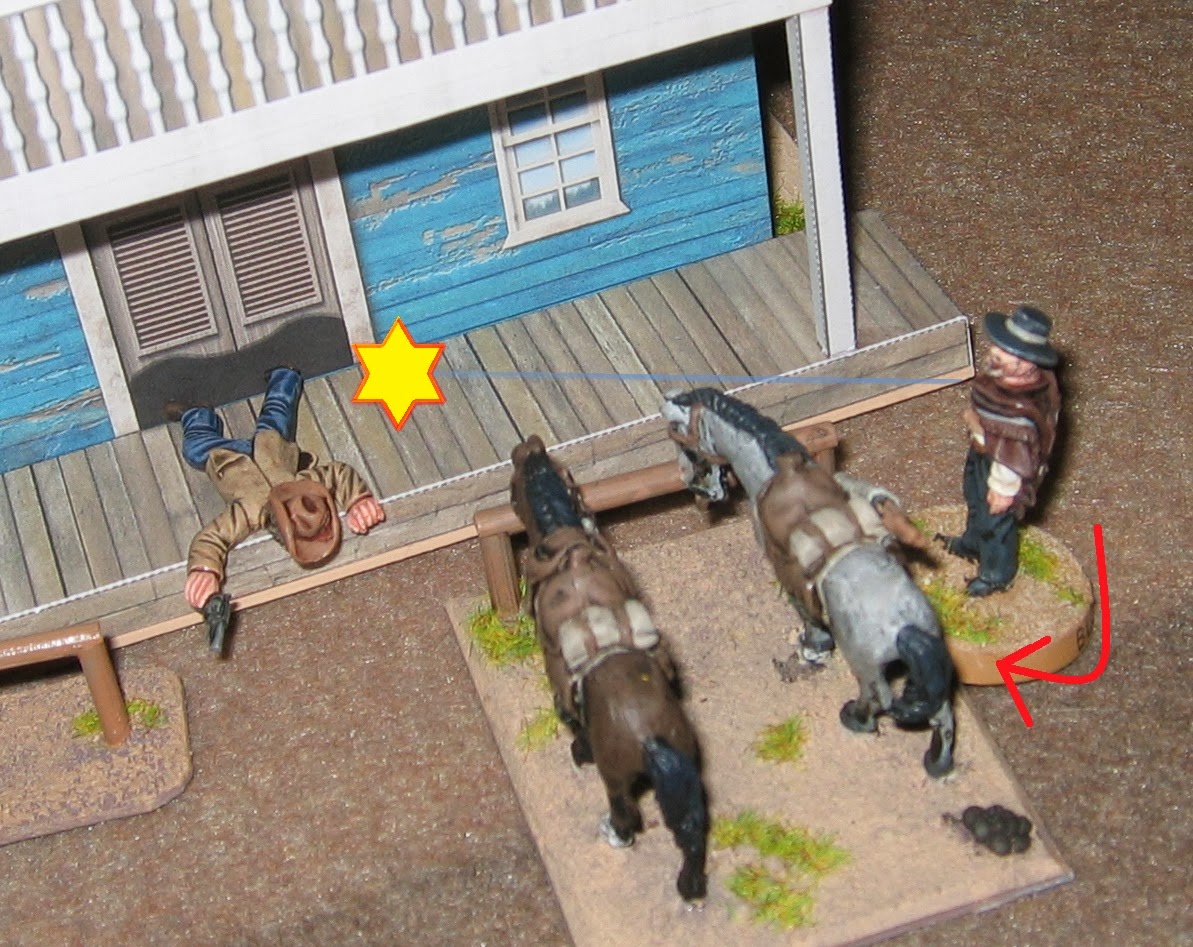 Blondie ran up to shelter behind the horses that were tied up outside the saloon.  He hadn't realised that a bandito had just come out of the building, but when he heard a noise he spun round like lightning and shot the ambusher dead.  I think the horse he was hiding behind was taken by surprise too! 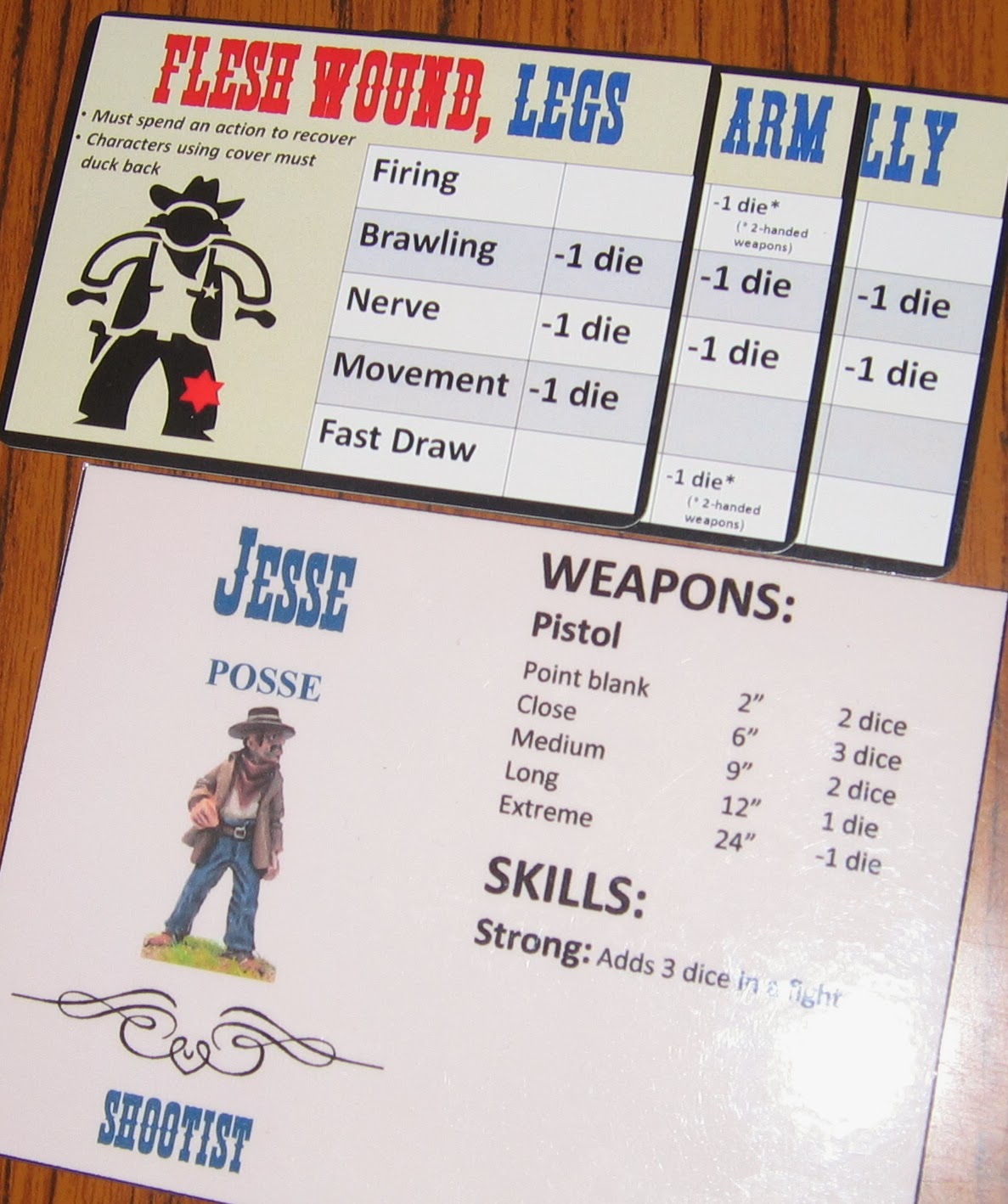 2-gun Rafael continued to make the running for the banditos.  He peppered the newly-arrived Jesse, wounding him multiple times but failing to knock the Americano out of action.  [That player still hadn't had a turn; all he could do was sit and take it (and look glum)!]. 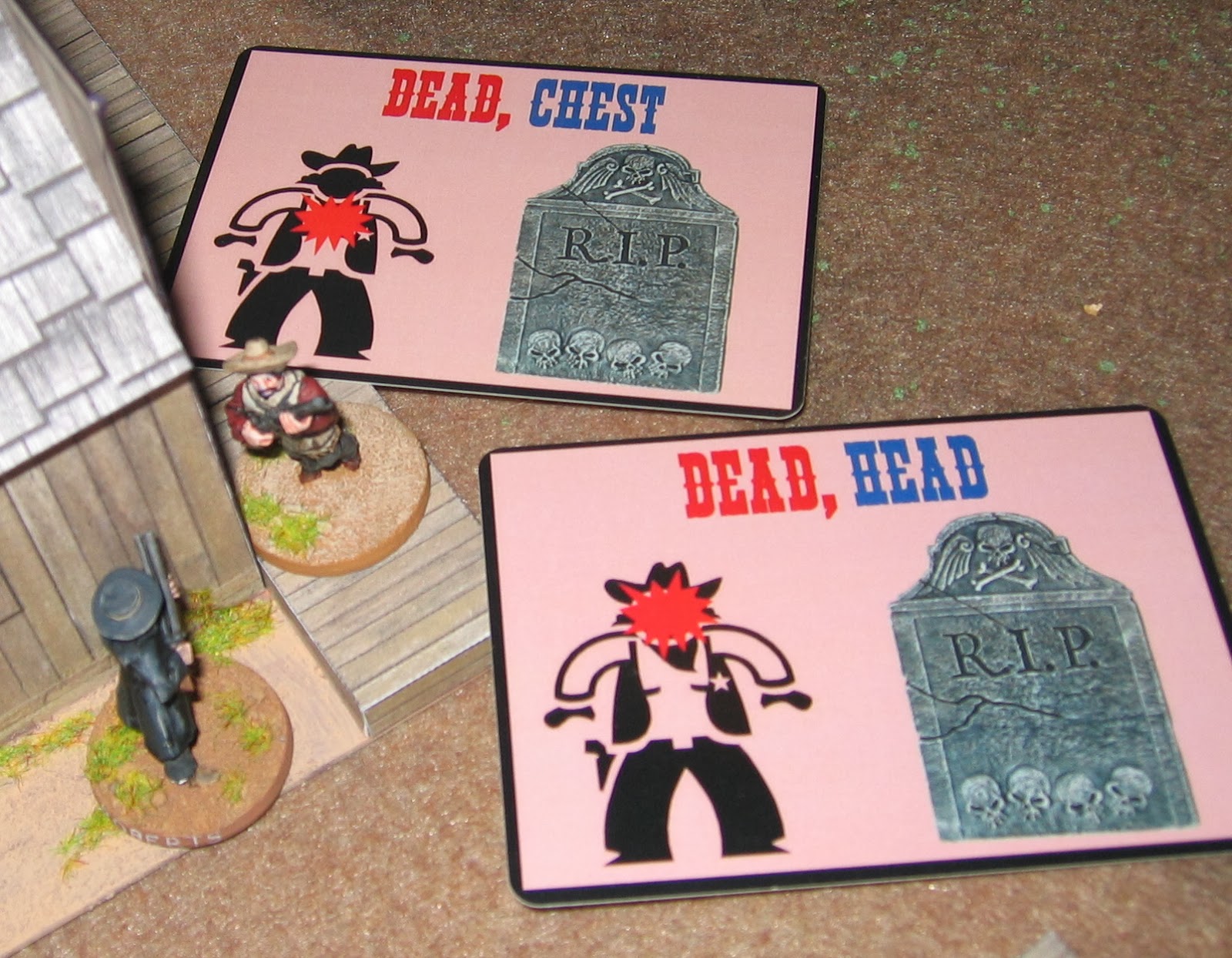 Sheriff Roberts and a bandito almost bumped into each other at the corner of one building.  All would depend on who got the first action card (and was able to make effective use of it, since the bandito's rifle wasn't a good weapon to have at this range).  The sheriff was the lucky one; he scored massive overkill with his shotgun! 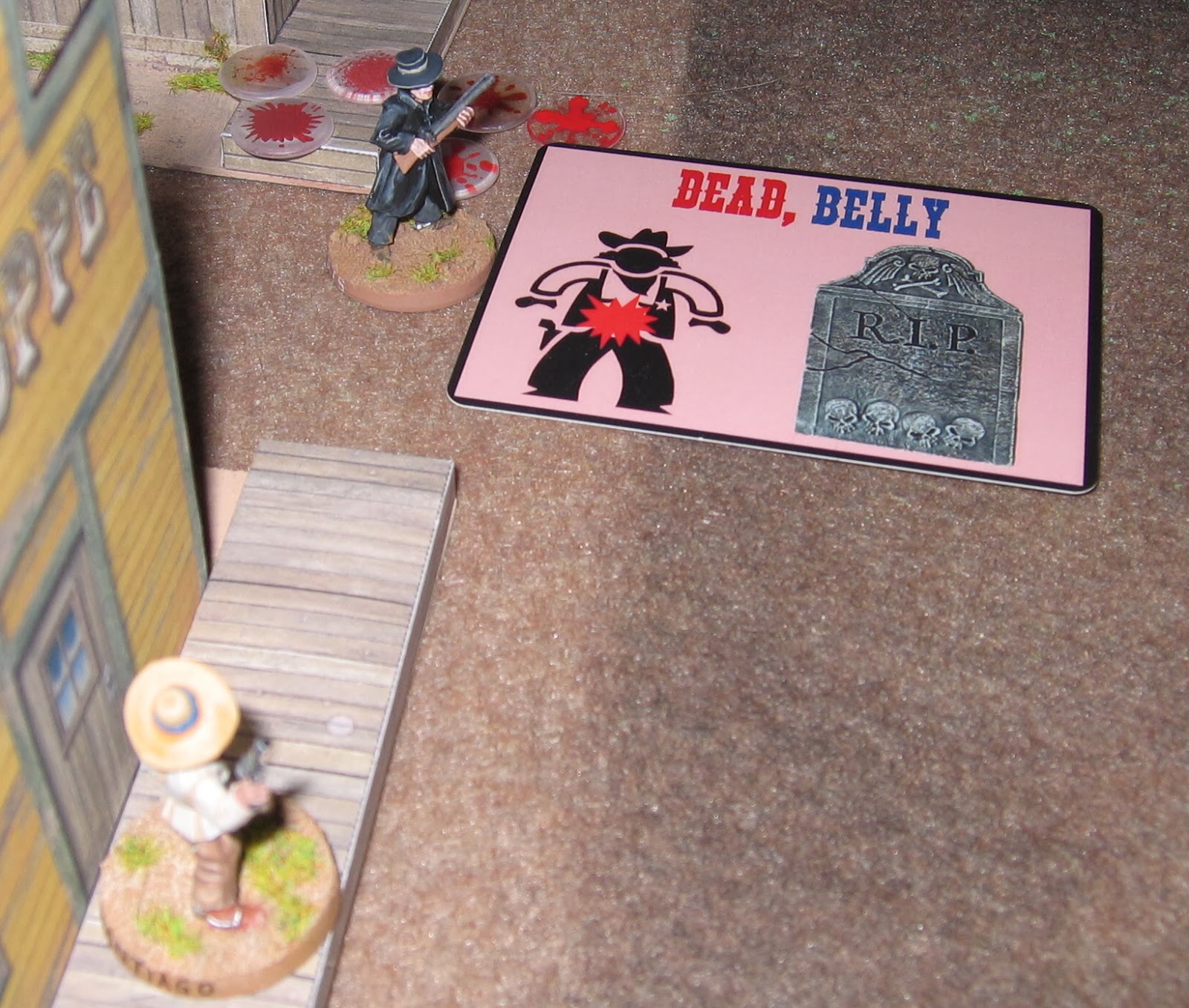 Feeling elated, Sheriff Roberts strode out into the main street, only to be gunned down by Santiago.  He was replaced by Emmett, the 7th Americano. 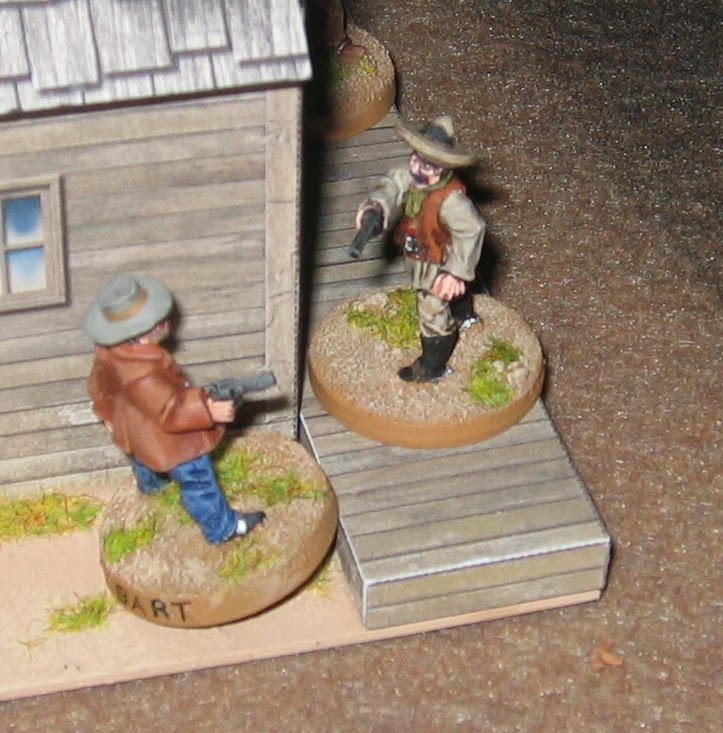 The badly injured, but still terrifying, Black Bart came face to face with a poor bandito Citizen.  The two of them wrestled, trading ineffectual punches for much of the game. 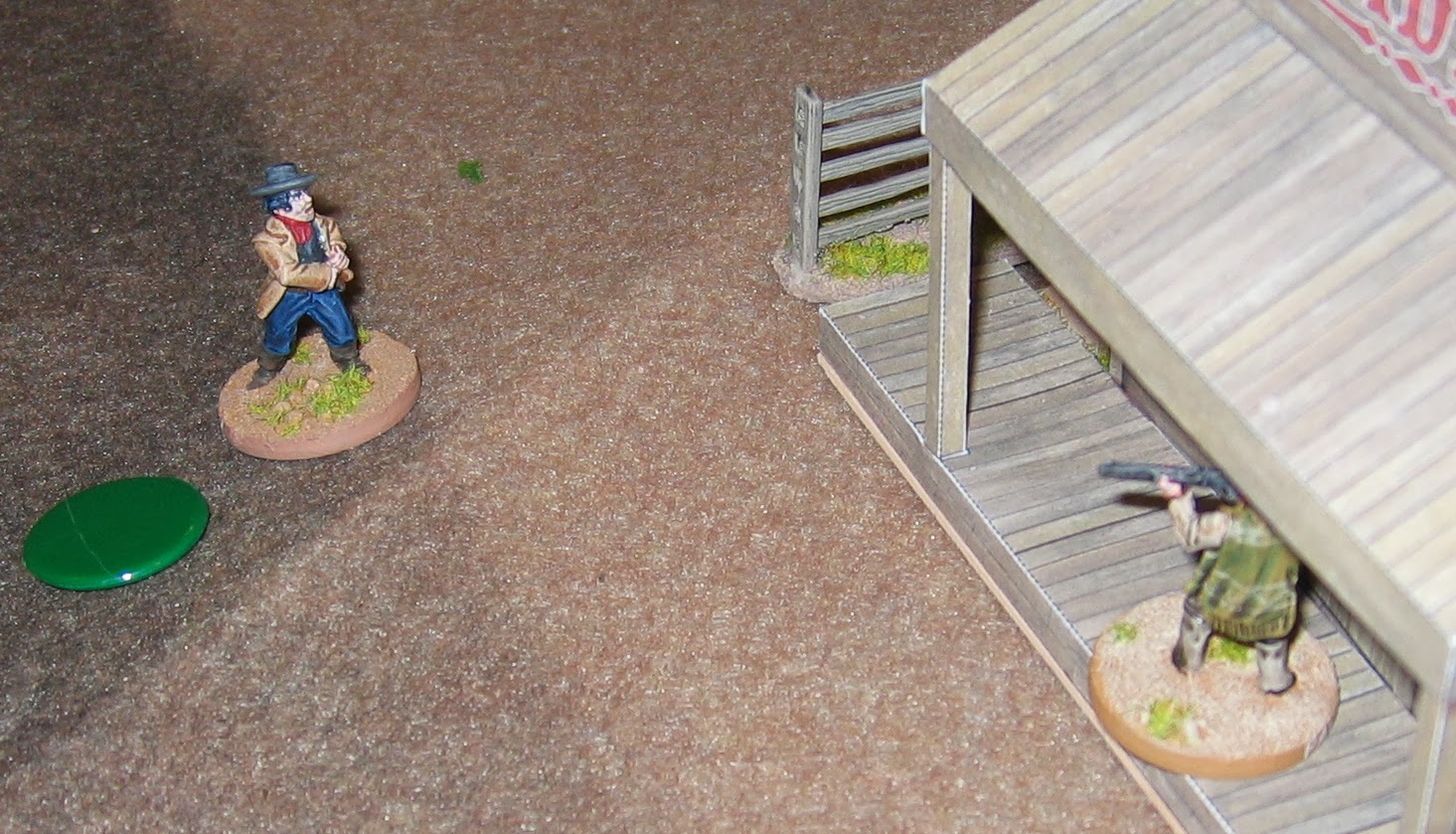 Deputy Rex was taken by surprise when a rifleman appeared out of a house behind him.  Although the Americano turned to face the bandito, the bad guy still had enough time to take an aimed shot, which severely injured poor Rex and knocked him out. 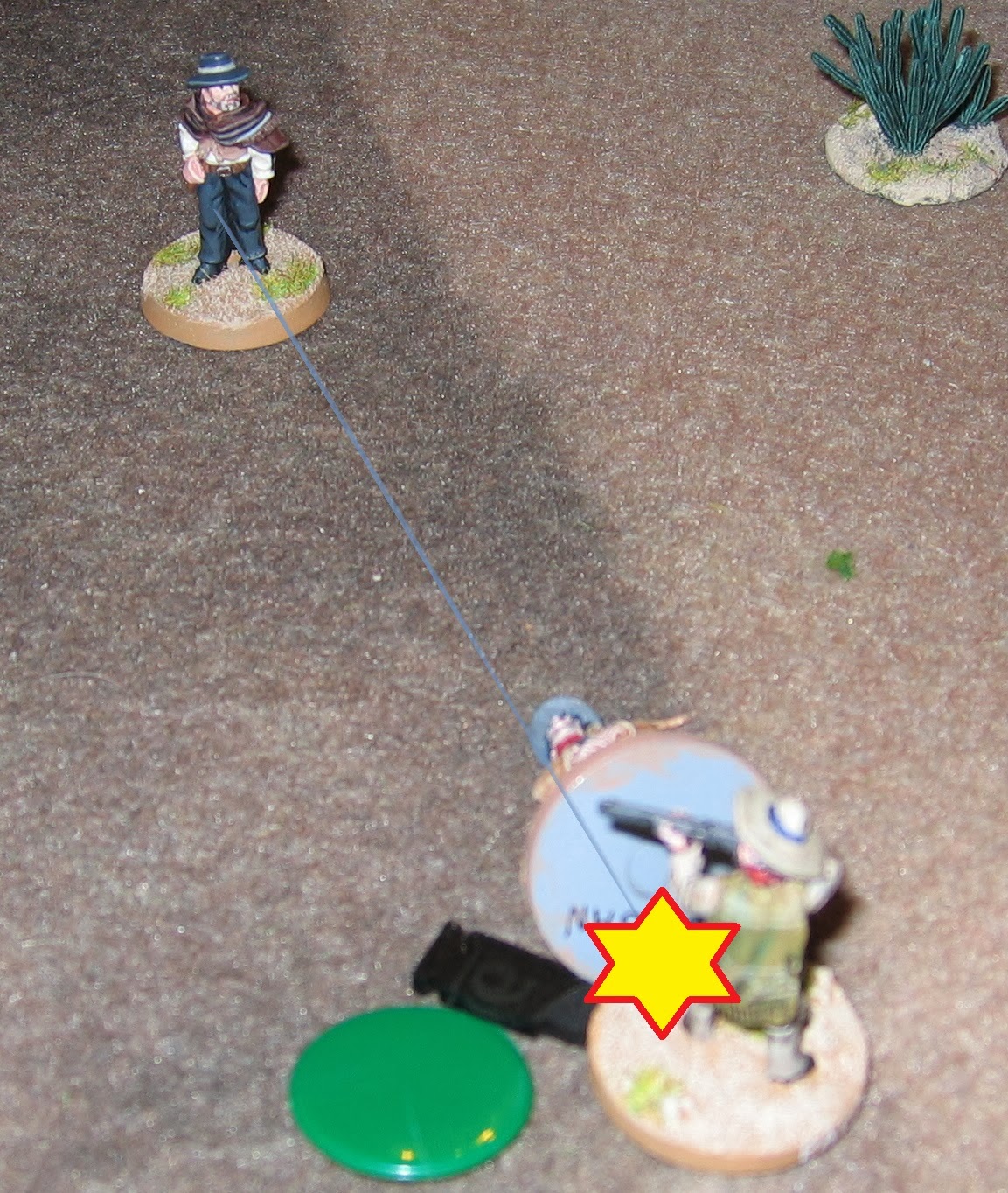 As the rifleman ran up to finish Rex off, Blondie came running down the street (he gets everywhere, doesn't he?!) and shot the bandito. 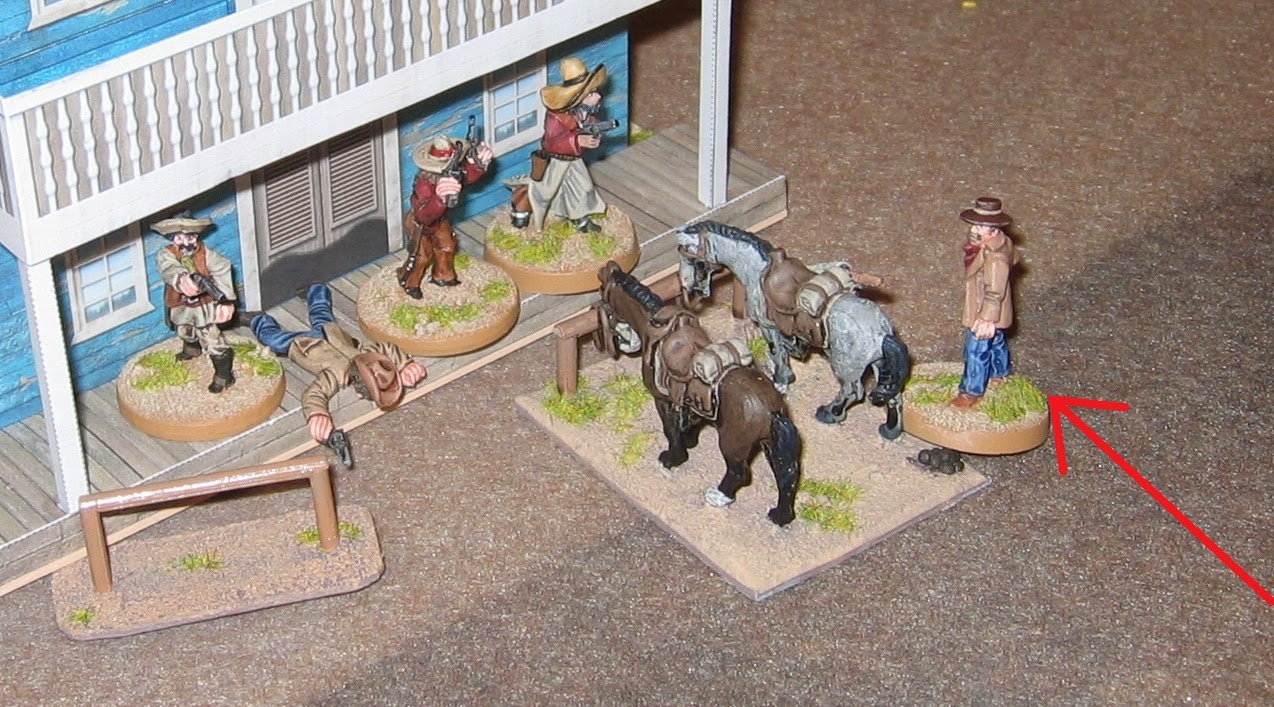 The injured Jesse staggered towards the saloon and was hiding behind the horse that Blondie had used for cover before.  In a very unlucky sequence of Bystander cards, 3 banditos came out of the doors, one after another, before he could react. 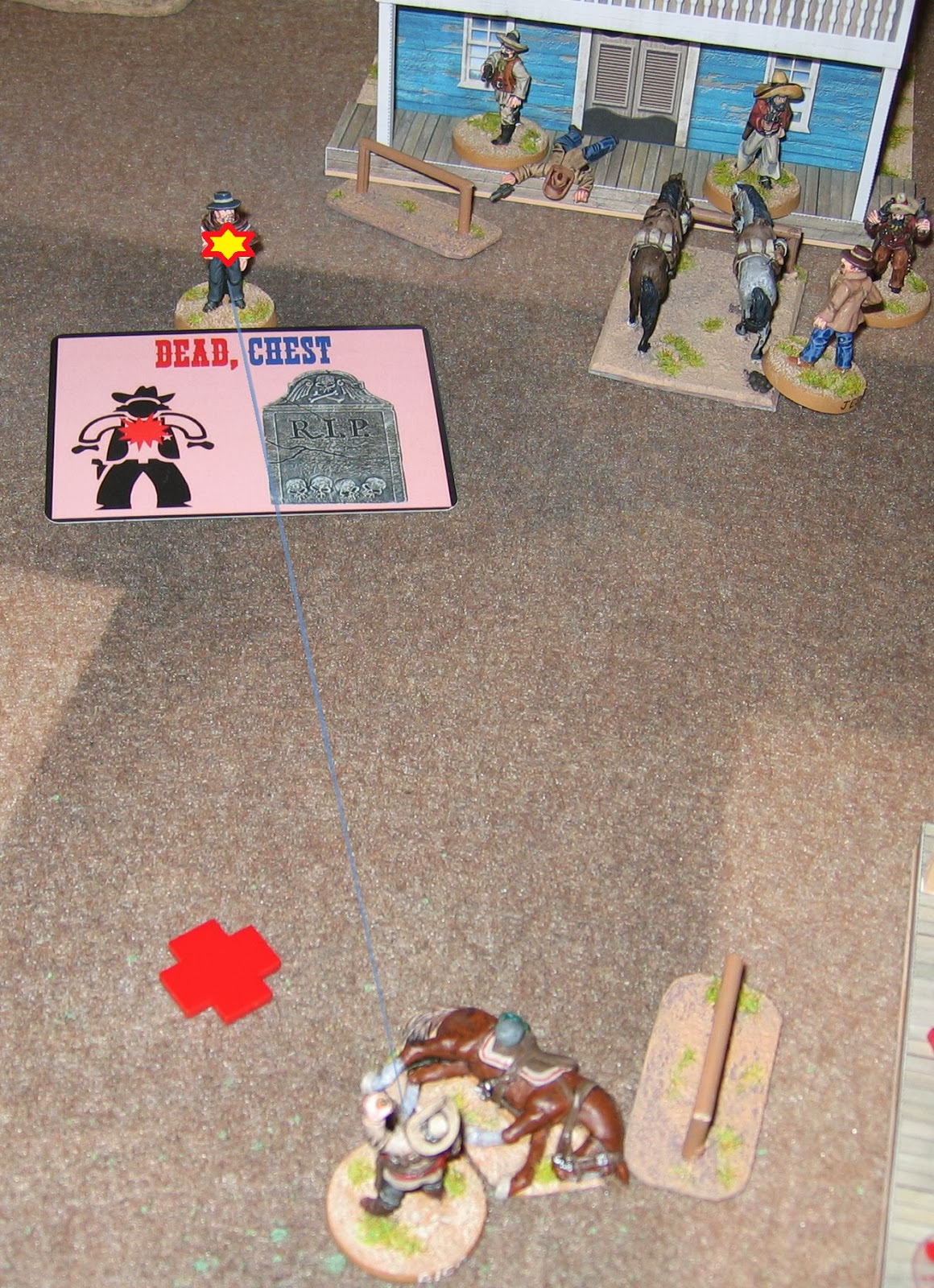 However, it wasn't Jesse who was unlucky.  In the very last turn of the game (we'd run out of time), the drunken bandito Rico sobered up and fired at Blondie.  Despite the moderately long range for a pistol, he dropped the Americano, dead!

The final casualty list was as follows:
Against this, somewhere around 10-15 banditos had been taken out of action, either dead or severely injured.

I think if I was running this again, there would have to be some changes.  In essence, the heroes' moves were too unpredictable.  This was especially a problem for 2 players (Black Bart and Preacher Adams/Jesse), who didn't get to do very much as their character cards just weren't drawn.  I think that either a player should have more than 1 model to control (thus multiplying their chances of having something to do), or extra activation cards need to be added to the deck for the Americanos.  If the former route is chosen then it restricts the number of players on the "good" side to 3 or maybe 4.  On the other hand, I've always been wary of altering the balance too heavily in favour of already-powerful characters by allowing them more chances to take actions.  Perhaps this could be justified on the grounds that the banditos are taken by surprise and are therefore confused, unprepared and slow to react?

So, did the seven win?  I don't know - you'll have to decide for yourself!