FUBAR: The Rumble in the Jungle

I've mentioned FUBAR before (here); it's a 1-page, fast-play set of rules for squad-level Science Fiction combat games.  Since I was at a bit of a loss when deciding what to bring to the games club this week, I thought I'd give it another outing.  It's been a while since I last played these rules.

FUBAR is adaptable to a wide variety of settings.  For example, it's sometimes used as a free alternative to Warhammer 40K or for games with Star Wars clix figures.  However I though that I would bring out some of my old VOID miniatures instead (note that these are still available from Scotia Grendel).  In this game, the Viridians (fervent ecologists) would attack a Syntha (cold cyborgs) outpost. 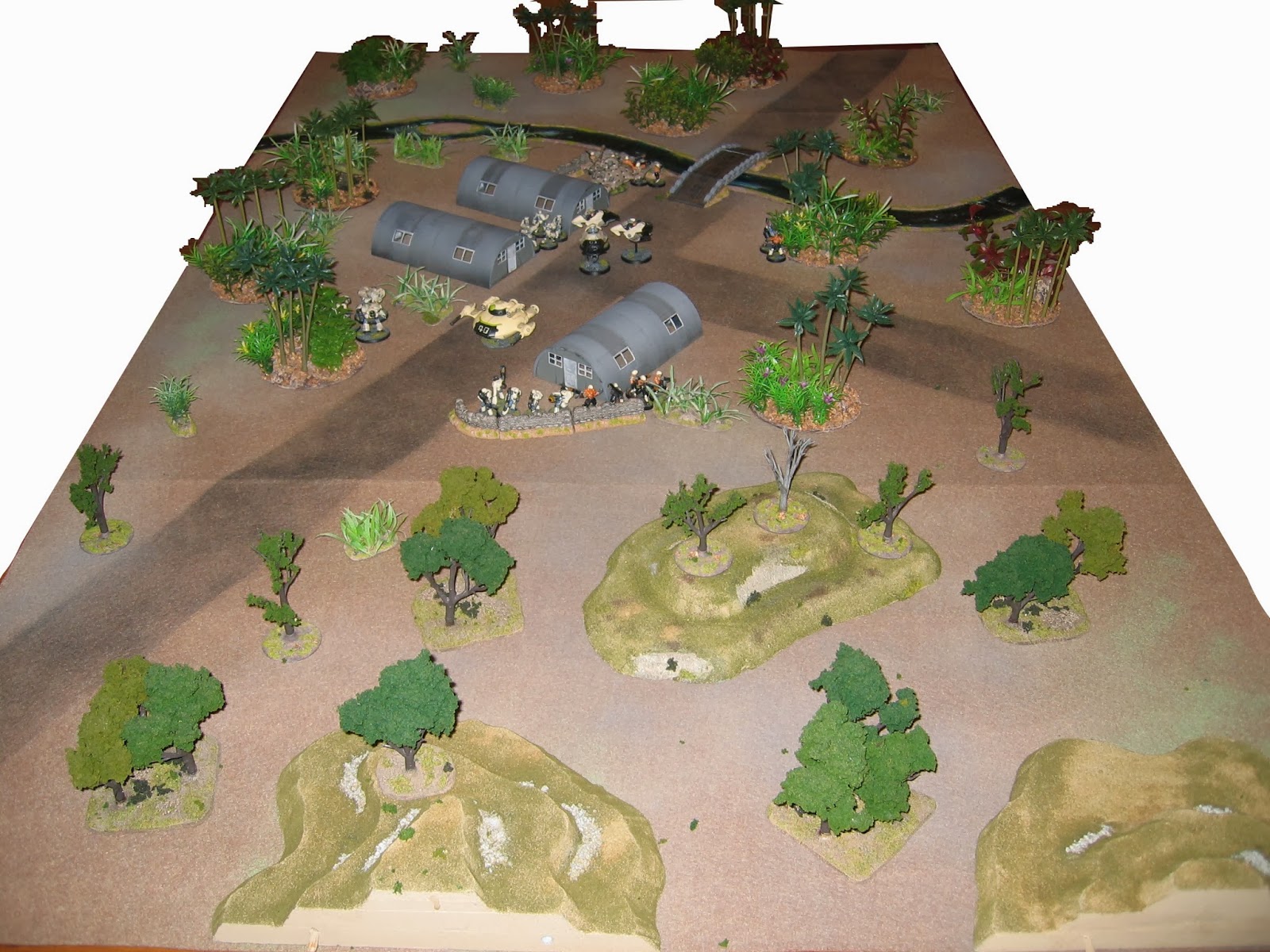 I think I may be getting something of a reputation at the club.  When one of the regular players saw the setup for this game, he asked nervously "Does this involve bugs?"  Of course, my answer was "Why?  Would that worry you?" (mua-ha-ha!).  It's true that I have used my Viridians in "bug hunt" games before, but there wouldn't be any hordes of monsters on this occasion!

This would be a very simple game: the Syntha have set up a base in the centre of the jungle and the Viridians don't like the mess they're making.  The attackers must wipe out the base, whilst the defenders must hold on!


Syntha troops are all deployed on the table from the start.  They have:
The Viridian force would be split into 2 parts; each would enter from a different end of the table.  Total force is as follows:
Since the Syntha had 2 commanders and the Viridians had 4, I expected the attackers to have a significant command and control advantage.  In FUBAR, when a player fails an activation roll for one of his units then his turn is over.  On average, the Viridians should have been able to activate about twice as many units as the Syntha for each round.  I hoped that this would compensate the attackers for the defenders' semi-prepared positions.


The crashing of something large through trees was the first the Syntha knew of the attack on their base.  A Viridian assault behemoth broke through the foliage and its gauss cannons all opened fire on the nearest defending tank, wrecking its grav-drive.  Powered infantry could be seen close behind the monster. 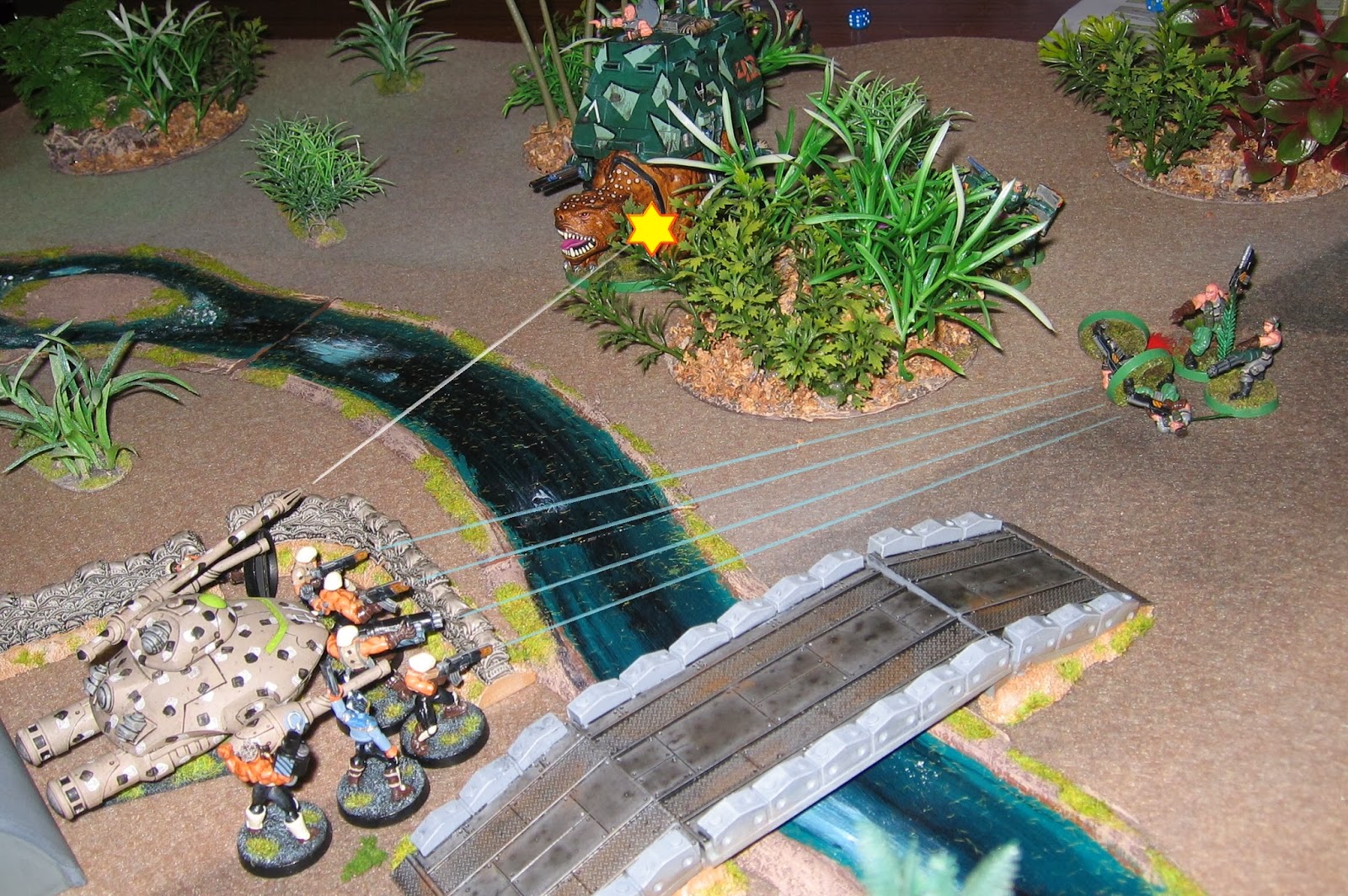 Quickly recovering from their surprise, the defenders returned fire.  The tank fired its star-cannon at the behemoth and stunned it with a near miss, while the marines blazed away on some hapless Viridian troopers who were in the open.  These were quickly suppressed and suffered casualties; they remained pinned in this position for a number of turns until the Syntha eventually found a higher priority target. 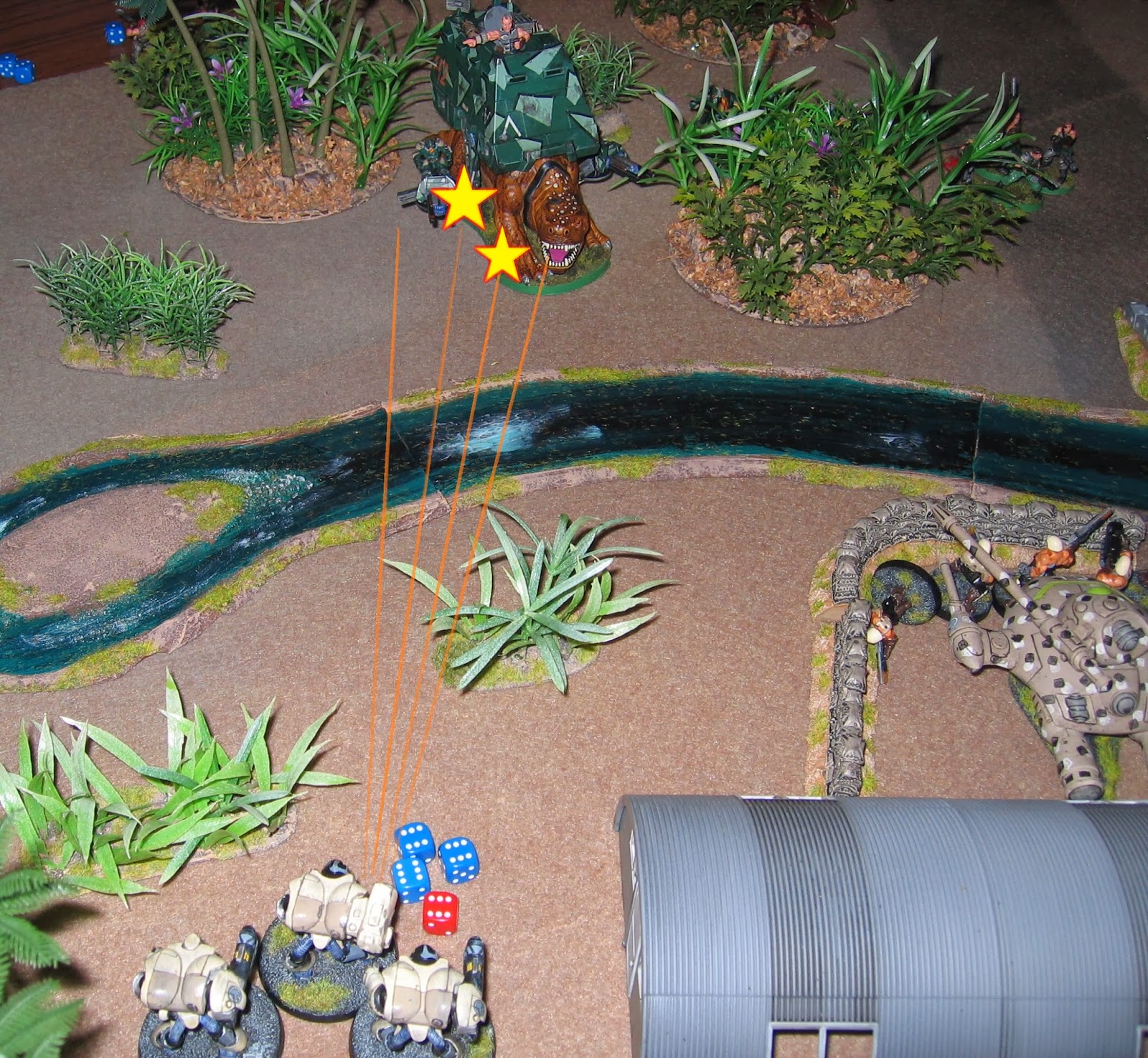 The disoriented behemoth failed to activate, as did all of the Viridian southern command.  Figuring that they were only being attacked from 1 direction after all, the Syntha moved some of their large robots into a position where they could see the creature.  A superb shot from the 'bots managed to break one of the behemoth's legs and destroy the nearer gauss cannon.  From now on the Viridian creature couldn't move and had only half its original fire-power.  I would have said that it was a sitting duck - except that it doesn't look anything like a duck! Finally, the other part of the Viridian attack arrived, from the south.  The Syntha pretty much ignored them, because (a) the attackers were still a fair way off and (b) they didn't seem to know what to do with themselves. 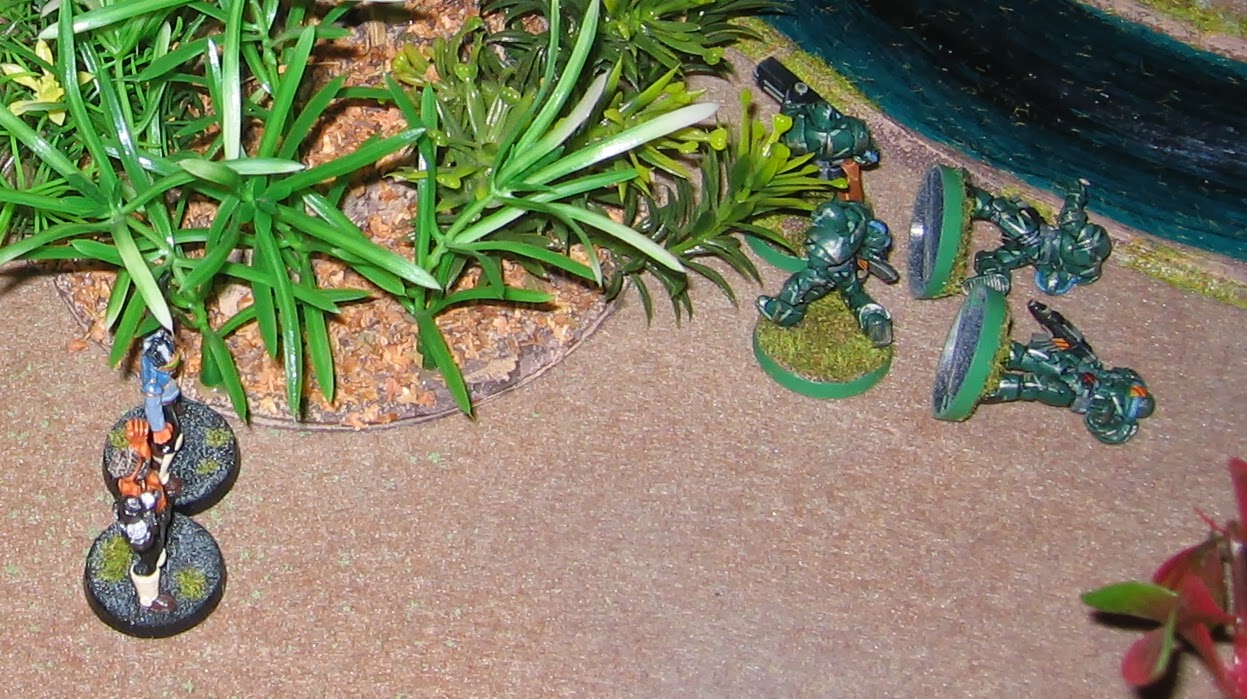 In another part of the northern assault, a Viridian squad had crossed the river.  They hoped that this movement hadn't been seen, but the 2 biomechs were waiting for them.  The armoured infantry turned out to be no match for the super-soldiers and hit the dirt to avoid casualties. 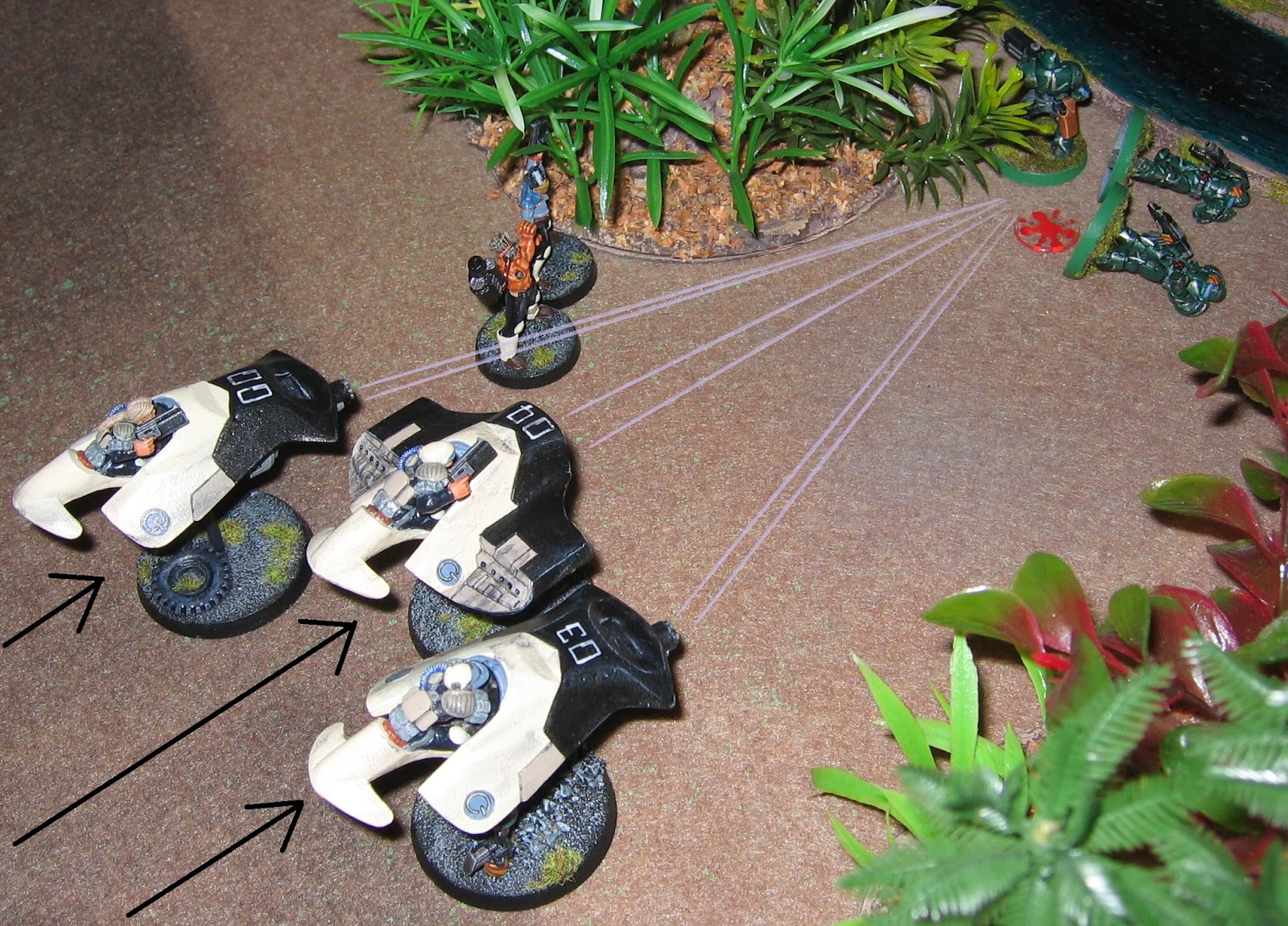 When the Syntha grav-bikes joined in, the attackers started to take losses, despite their armour.  Eventually this infantry squad was wiped out. 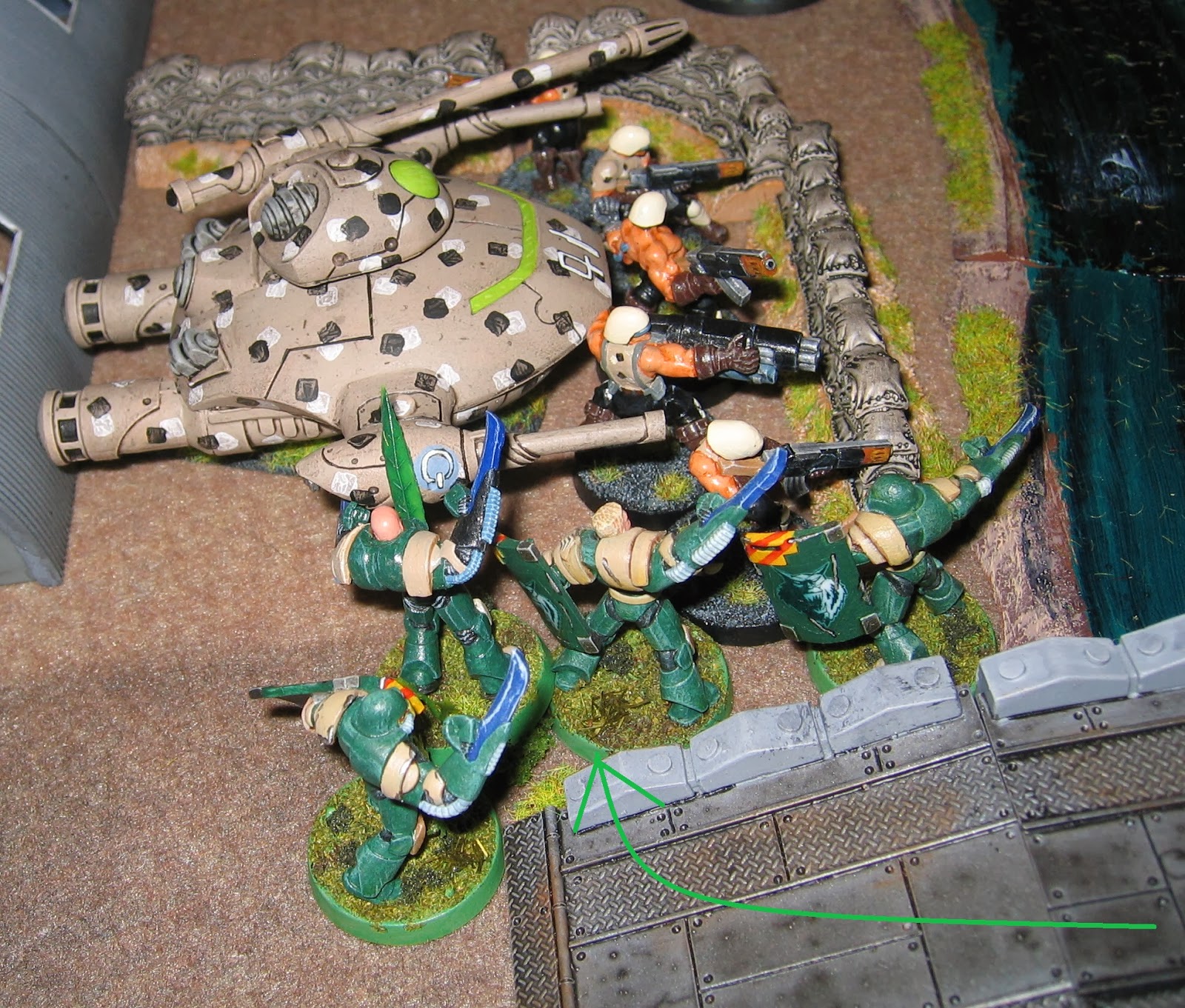 Nemesis-41 was busy receiving a software update [i.e. the tank failed its activation roll for several turns in a row], so a Viridian assault squad seized the opportunity to race across the bridge and assault the nearby infantry.  Despite being outclassed, the Syntha troopers defended heroically; both sides were still locked in melee by the end of the game. 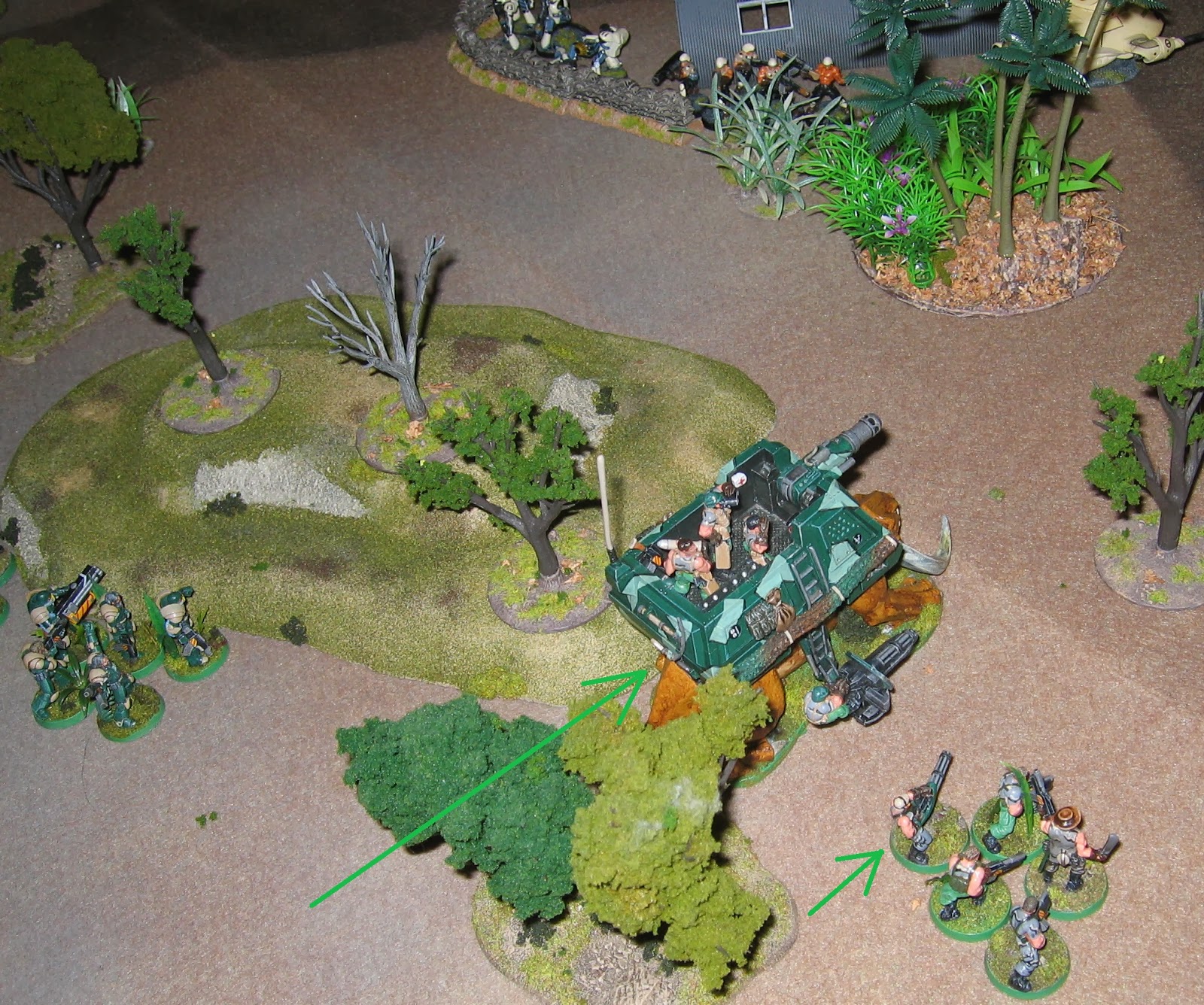 At the southern end of the table, the other Viridian behemoth and supporting infantry began edging past the Syntha positions. 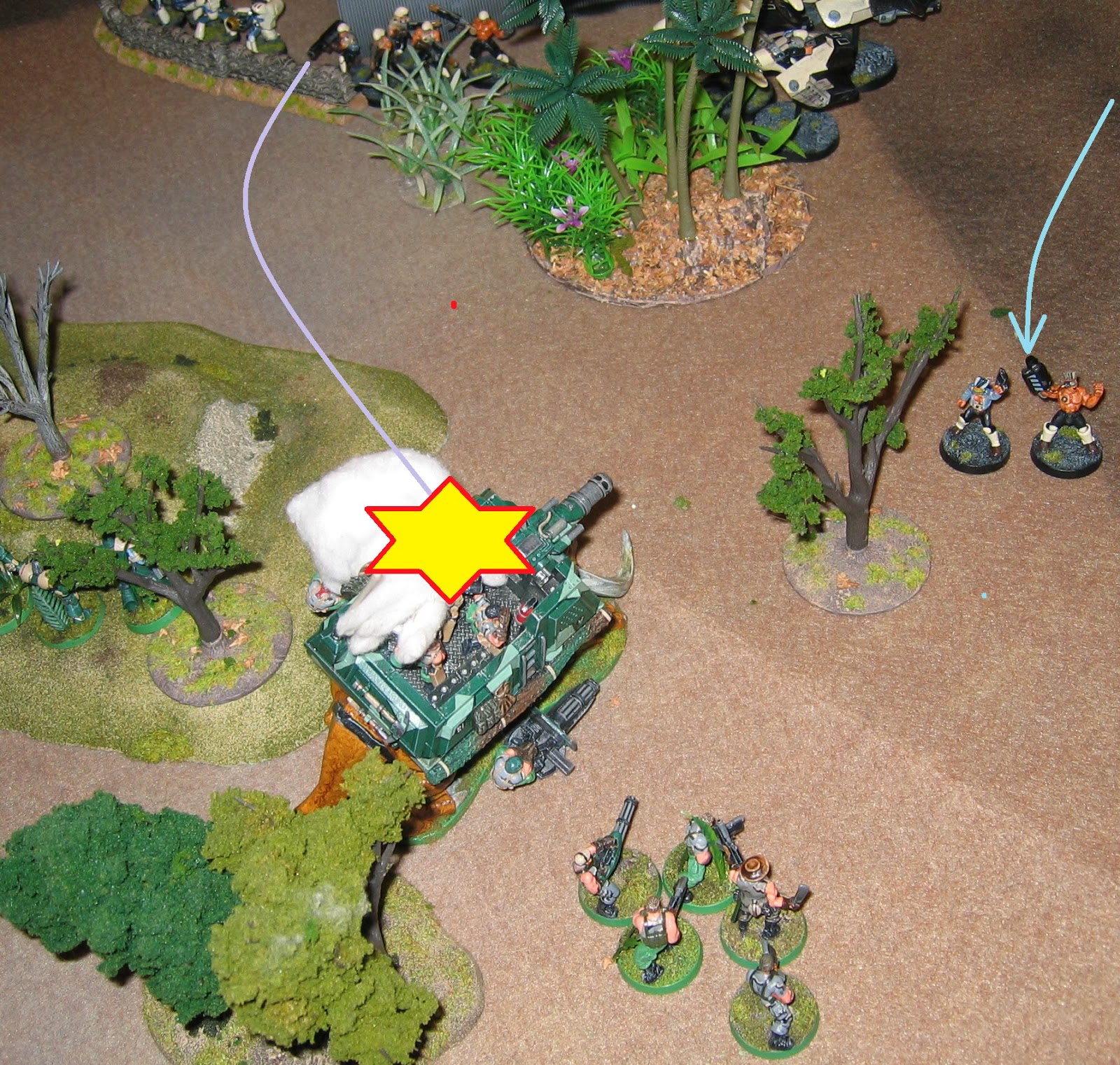 For a moment, this looked like a dangerous move.  However, a very lucky missile from the emplaced Syntha infantry detonated the ammunition in the behemoth's howdah, killing the creature and all crew.  The 2 defending biomechs also raced towards the scene, making the nearby Viridian troopers very uneasy. 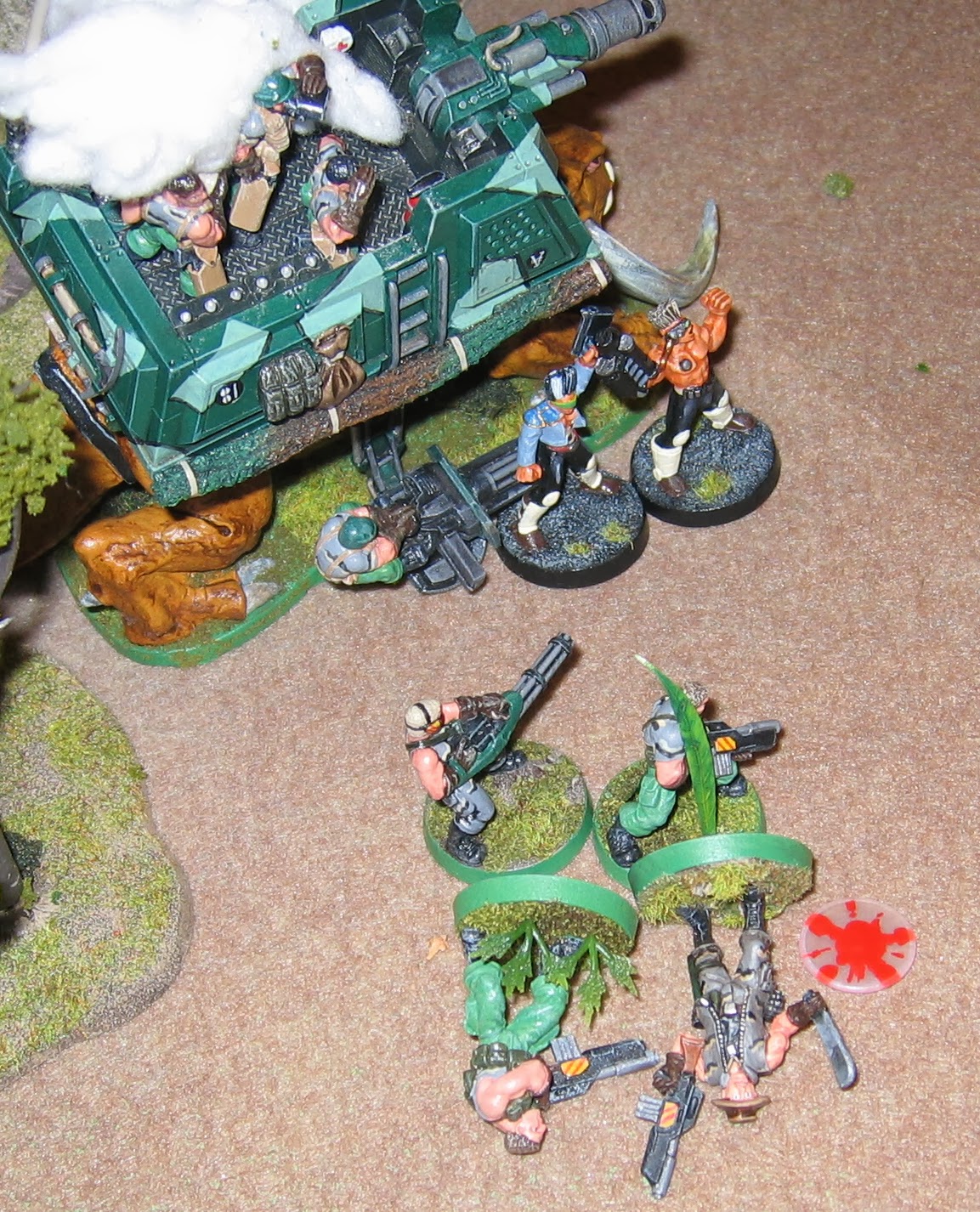 The worried troopers quickly found that they couldn't draw a bead on the fast-moving biomechs; most shots were dodged and the few which seemed to strike home had no effect.  In return, the cyborgs made mincemeat of the humans, killing one outright and sending others sprawling for cover in the dirt. 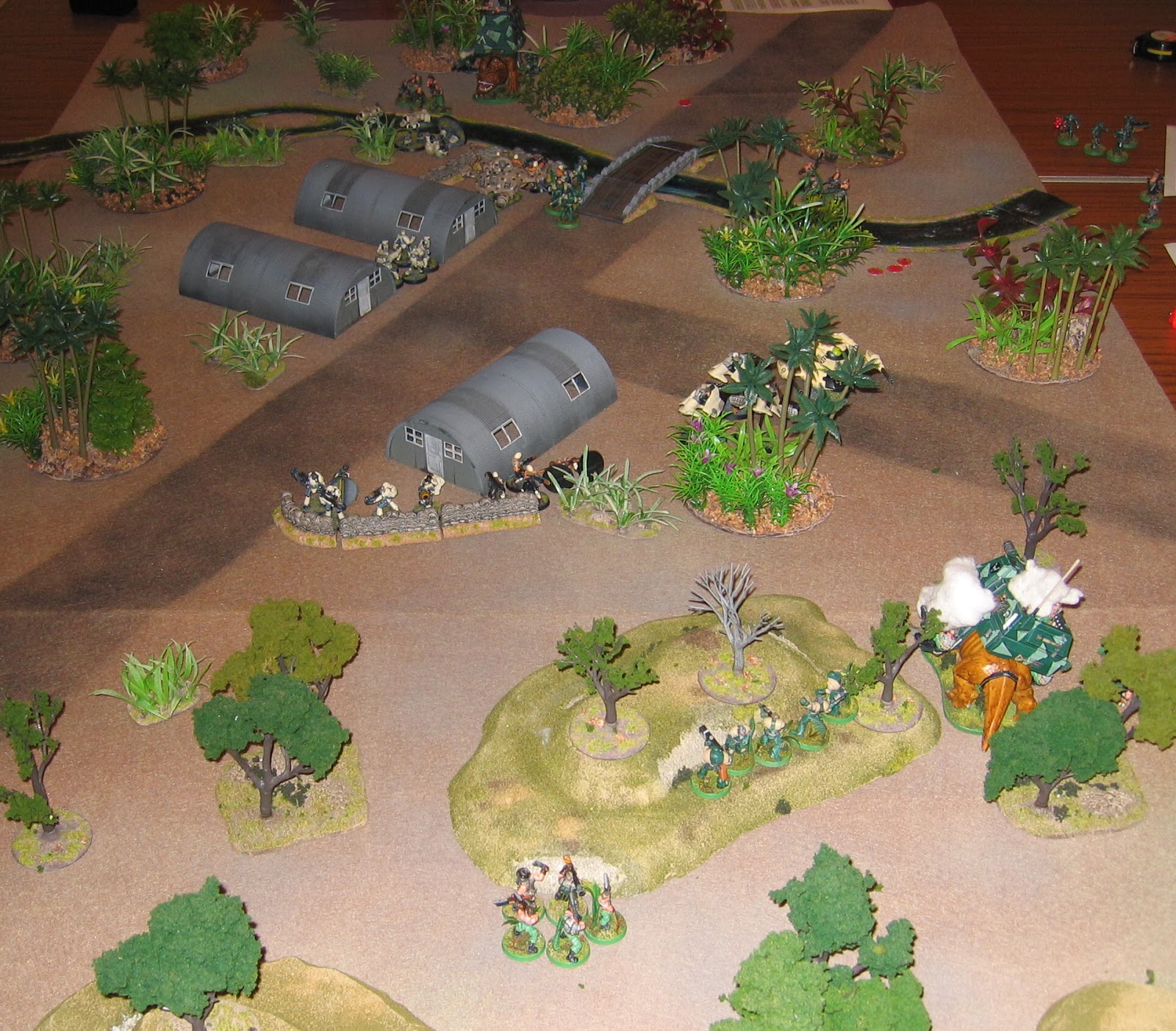 By the end of the game (when time was up!), the Viridian attack seemed to have stalled.  Various units were exchanging fire with their Syntha counterparts, but this was fairly desultory.  The one possible success could have been the Viridian assault troopers attack in the north, but a counter-attack from assault robots was expected imminently.  Finally, the defenders still had quite a lot of their forces available as a mobile reserve - Hades-40, the 3 grav-bikes and the 2 biomechs - whereas the Viridian scouts were the only unit the attackers hadn't committed.  I'd say that the Syntha have managed to hold their position very effectively!

So, how did FUBAR work out?  It's certainly quick to play and the unit activation rules force the players to concentrate on what really matters at the time.  Overall I think it's a very useful set of rules, though a lot depends on the attributes you create for your models.

Being caught in the open is bad news, especially for unarmoured infantry.  Not many models died, at least in part because my squads were small and therefore had limited fire-power, but the suppression certainly limited what units could do.

I'm not really a fan of "partial" damage for tanks or other vehicles (e.g. loss of a weapon, mobility or other attributes).  Because of this rule, most of the "vehicles" in the north survived the entire game, albeit with various bits shot off.  Only the luckiest hit would truly destroy such a model!

Unit of the match: the 2 Syntha biomechs, without a doubt.  They were fast, elusive and hard-hitting.  Their elite rating meant that they would activate on a 2+; this made them extremely active.  Indeed, with the exception of the one dead behemoth and its crew, they caused almost all the fatalities in the entire game.

Most useless: I think I'd have to go for the Viridian scouts.  For a long time they refused to come on to the table.  When they finally arrived, they skulked about in the woods and hid so well that they don't even appear in any of the photographs.  At least all of the other units on both sides used their weapons, even if they didn't all hit anything.  Apart from the assault synths, that is - but they were an obvious reserve in case the perimeter was breached!