It's that time of year again when I hope to do a lot of painting during the holiday season.  However, as usual, a combination of family duties and sickness has prevented much progress.  For comparison, this is the state of things one year ago: http://colgar6.blogspot.com/2012/12/the-workbench-december-2012.html.  One of these years I will get stuff done over the Christmas and New Year holidays! 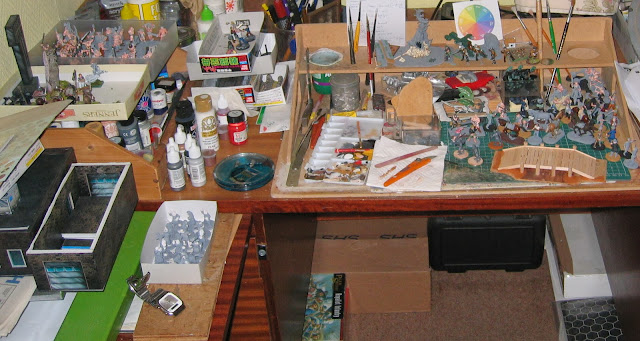 So instead of showing you all my output for 2 weeks of effort, here's a record of my untidy workbench... 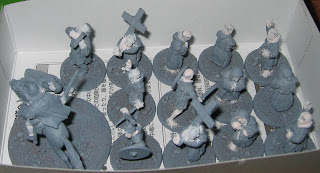 Let's start the tour at the left hand side.  Here we have one of my Christmas presents: a box of figures destined for SAGA.  Most of them are monks, some of whom are armed.  These will form an angry mob, probably for my Scots warband (since they're angry at the Vikings, they cannot be part of that force).  There are also another bard and a mounted Scots warlord in the box. 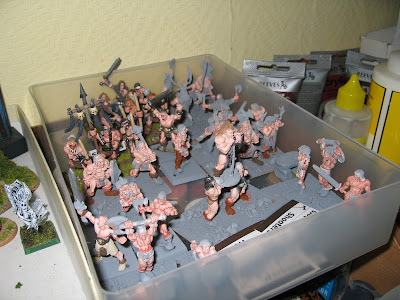 Further back, but still on the left, is my Barbarian army for Hordes of the Things.  This was last year's Christmas present and I have actually completed 3 bases of it.  Only another 9 or so to go... 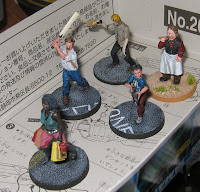 Next to that, there is a pile of boxes.  The top box contains a mixture of figures that are waiting to be sealed.  I managed to run out of varnish a day or two into the holiday season, just as all the small hobby retailers shut up shop for 2 weeks!  Still, as soon as the ordered materials arrive, it will only take a few moments to finish off these models. 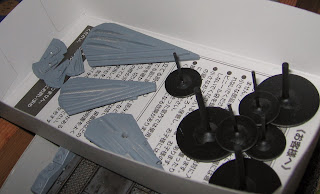 The next box down in the stack contains another Christmas present.  This is a small squadron of starships that I will use as Tholians in my "not Trek" games.  Tholians were a very minor race in the Star Trek universe, most notable for their unique energy web technology.  I'll need to come up with some appropriate Full Thrust rules for the Tholian Web...

To the front of my painting station is a plank bridge.  My apologies for the quality of the photograph; this didn't come out well and I haven't the energy to re-take it.  The bridge is my first attempt at using coffee stirrers as building materials; I think it'll be quite effective when finished. 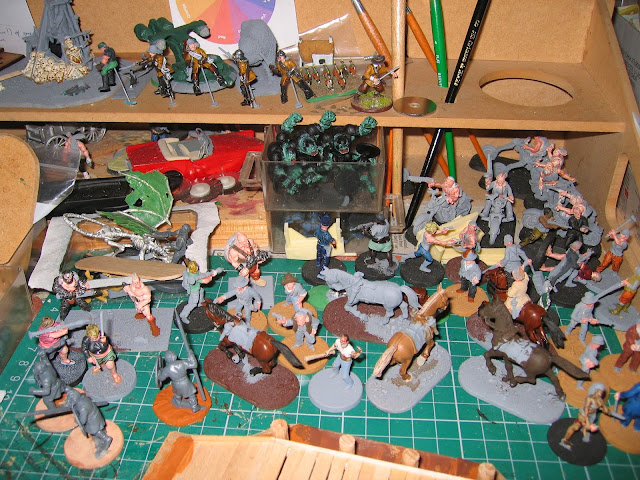 The rest of the painting station is the normal jumble of figures in various stages of construction:
Finally, my West Wind bikers can be seen at the rear right, where they have languished since last year's workbench posting.  Oh, well - maybe I'll finish them this year!
Posted by Colgar6 at 11:56