A short while ago, I published Part 1 of "Little Lost Girl".  Since it was my wedding anniversary, I didn't have enough time to complete the story in a single sitting.  That was then, so here is the 2nd and final part of the battle report... 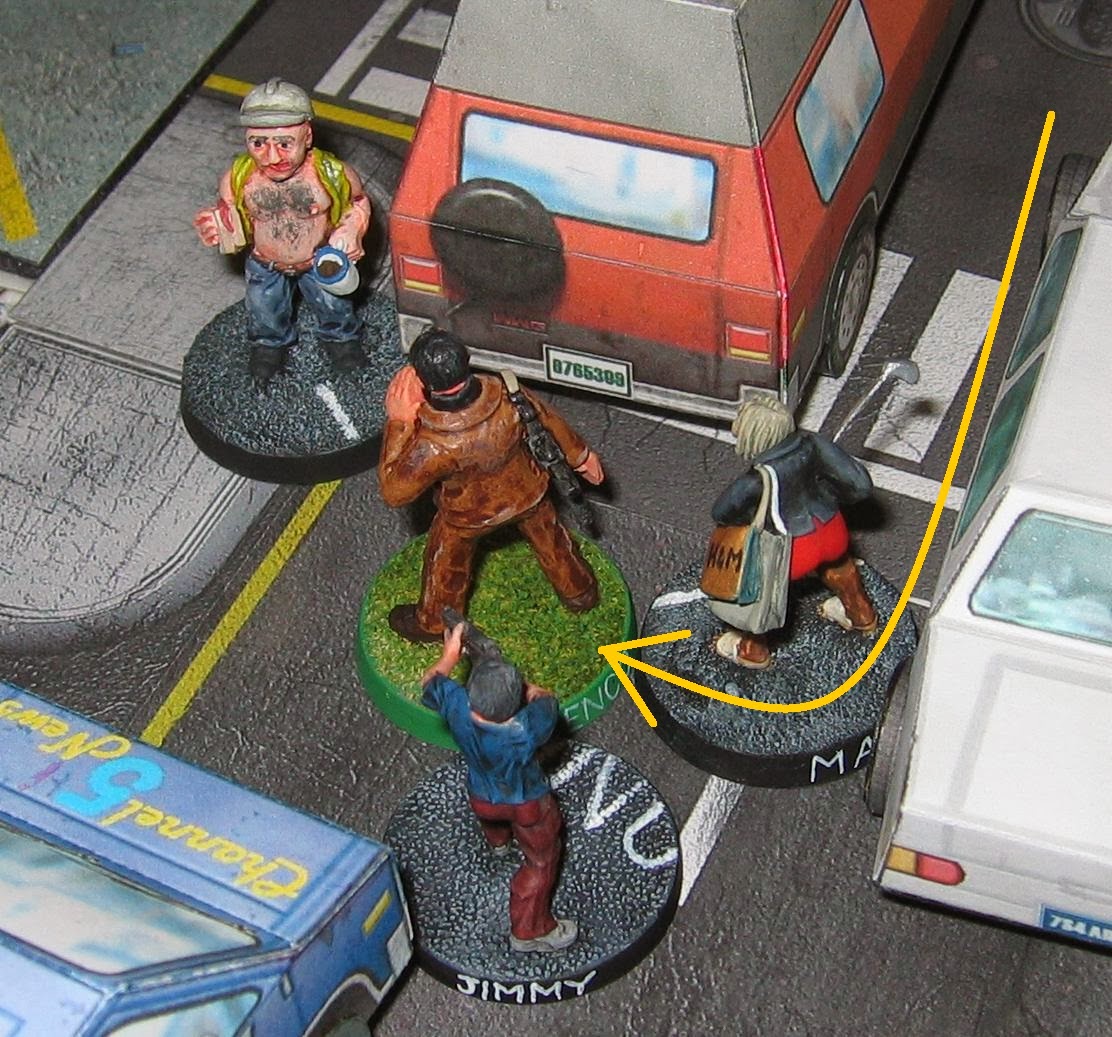 Bob was jolted out of his bacon roll reverie by the sound of footsteps approaching from the far side of the nearest van.  He was just starting to be alarmed when 3 humans walked into view (Vincenzo, Mary and Timmy - all REP 4).  Their leader, a tall, fit-looking man in a brown suit, eyed Bob up warily.  "We heard shots" he said, calmly.  "Was that you?  I don't see any zeds around here..."
"Yes" replied the flustered tradesman.  "Er, no.  No - I haven't got a gun, see".
"Hey, don't sweat it" said Vincenzo.  "We're not trying to rob you or anything, OK?  Just looking out for ourselves.  You do know that noise seems to attract the Zs, don't you?"
"Sure, well of course".
"OK, then.  You take care".  With that, the 3 people started to walk away, in the direction of the restaurant. 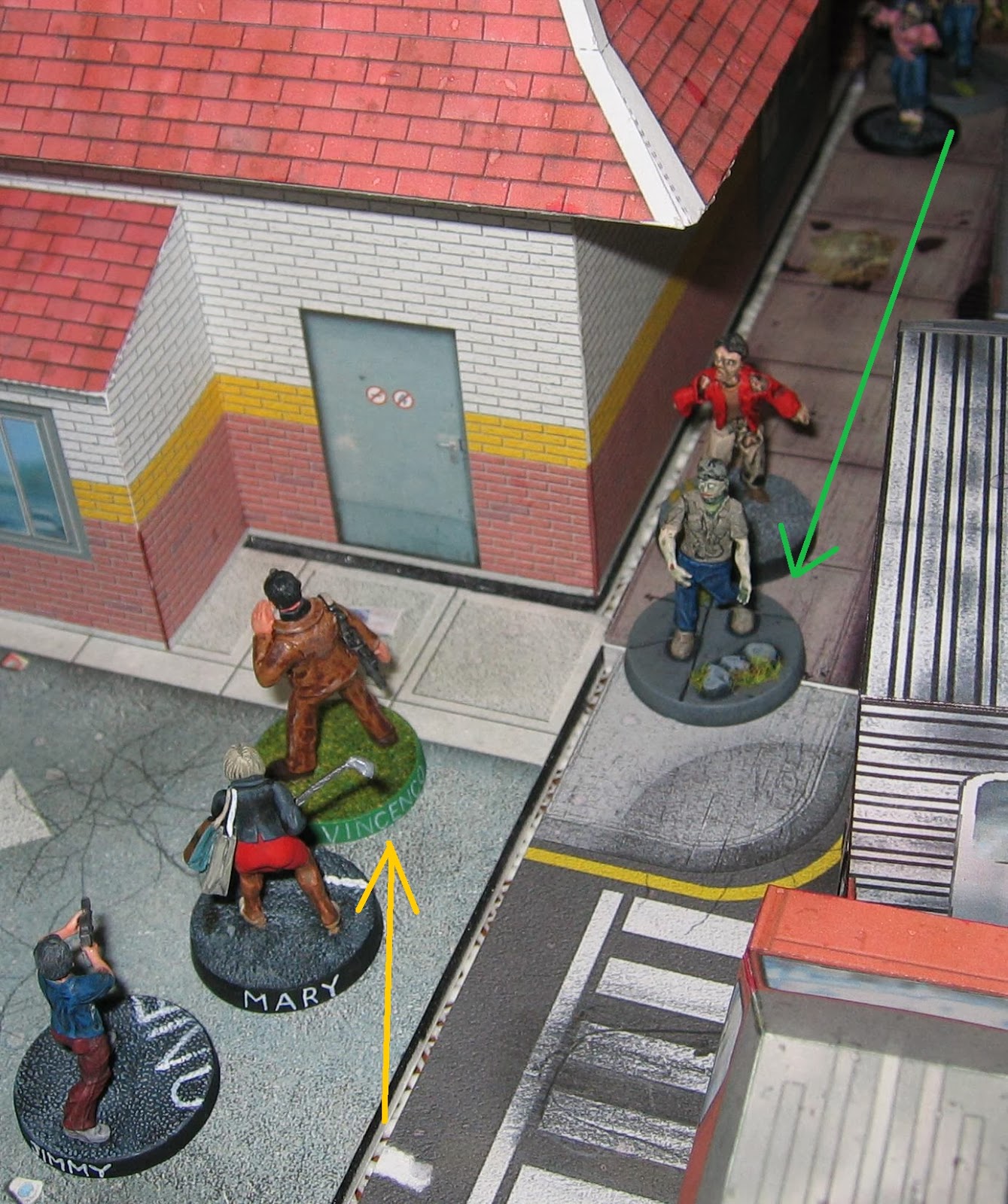 "Er, no - I wouldn't go that way!" called Bob, as he realised which direction the newcomers had taken.  His warning came a little too late, though, as the family almost bumped into the zombies who were following the sounds of Ernie's and Sid's argument. 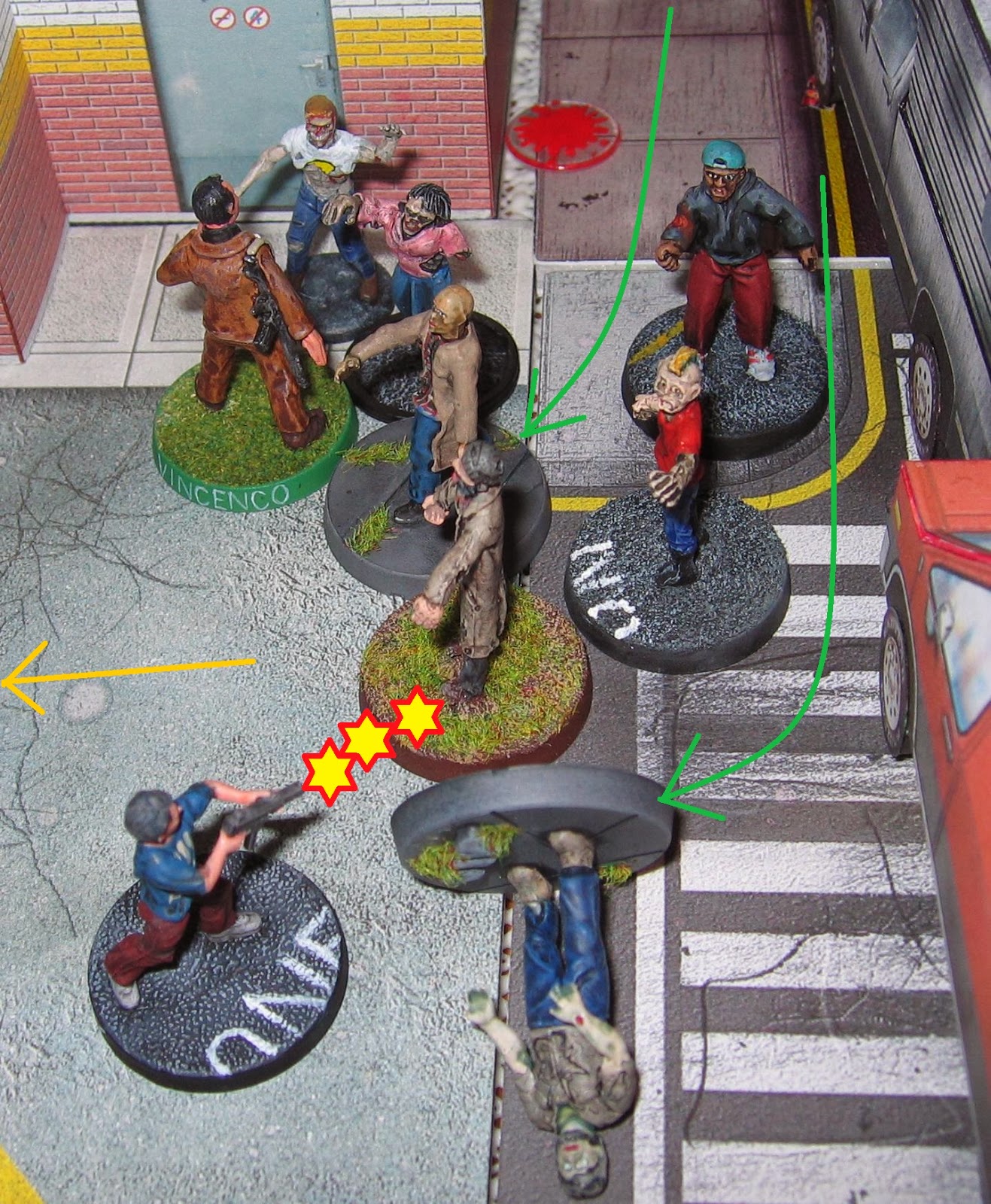 There was a sharp rattle of gunfire as both Vincenzo and Timmy opened up with automatic weapons.  Although they did kill 1 zombie and knocked down others, the remainder were upon them before they could do much.  Mary fled as the creatures approached and Timmy managed (just!) to fend off his attackers.  However, Vincenzo was quickly surrounded. 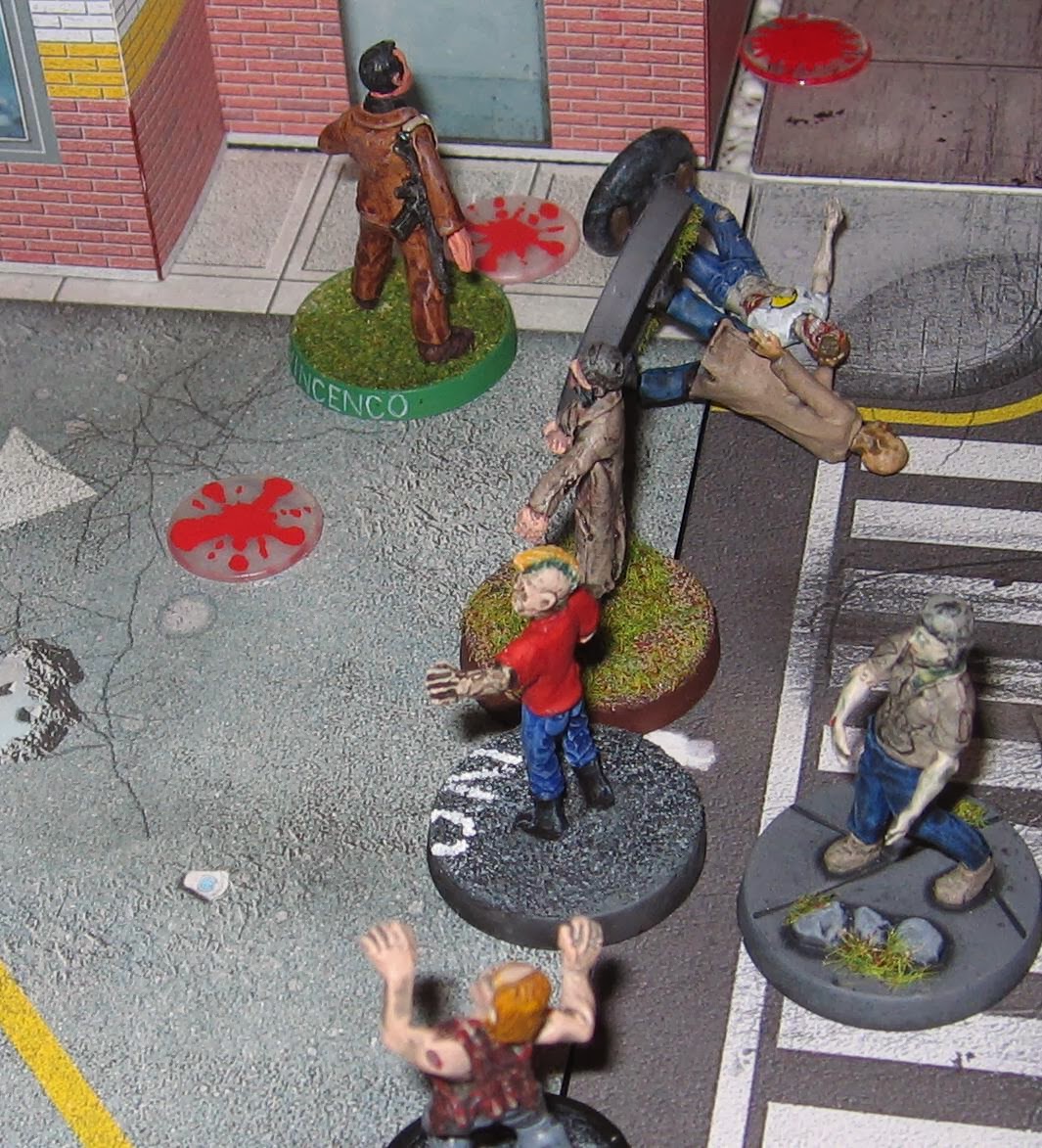 Timmy ran after Mary as soon as he could free himself from the attackers' clutches.  For a moment, it looked as if Vincenzo would also be able to get away... 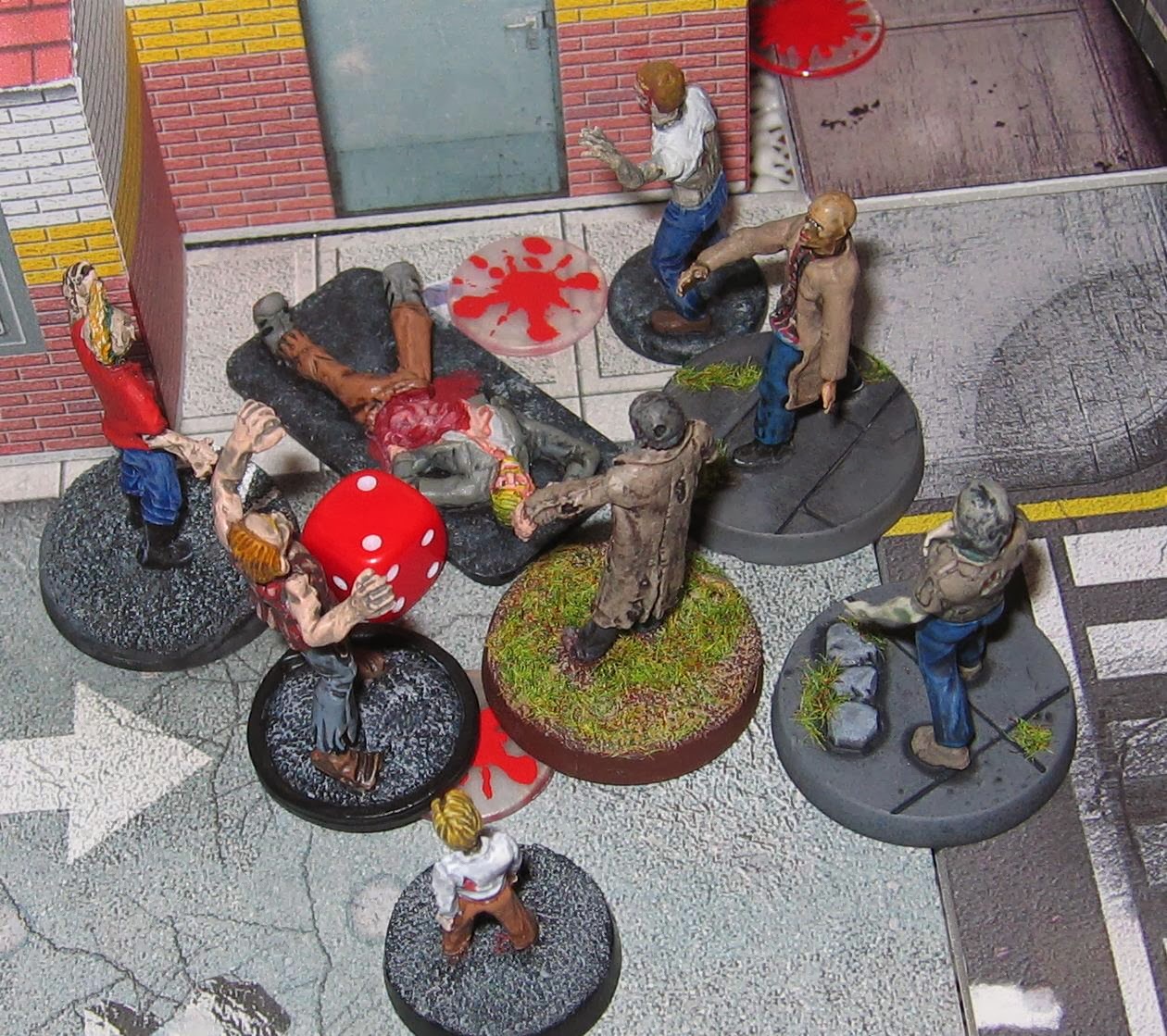 ...but the remaining zombies overwhelmed him and tore the big man apart in a frenzy. 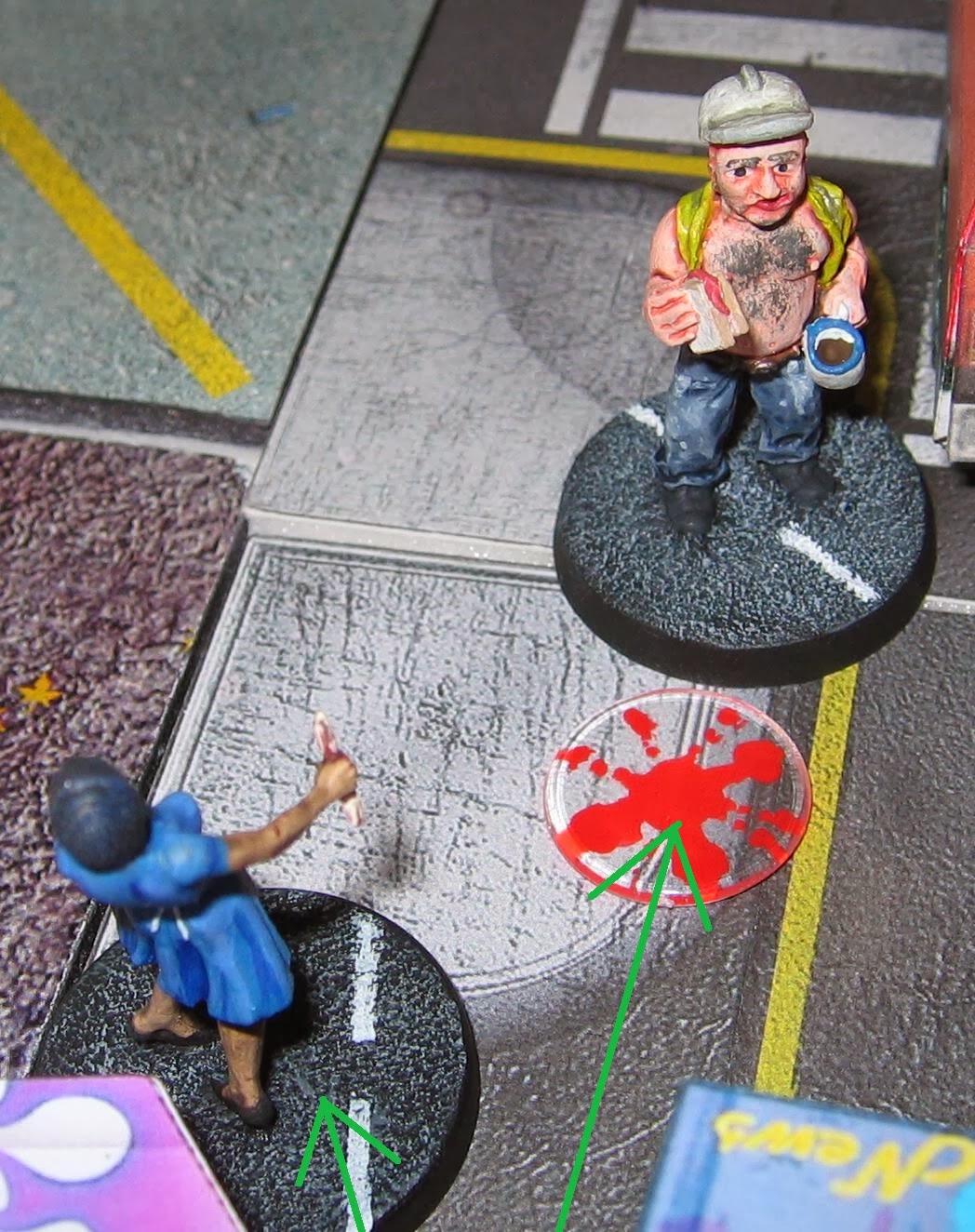 While the fight was going on behind him, Bob was faced with another pair of zombies that had been attracted by all the commotion.  Fortunately for the builder, there was only room for one of these to approach at once due to the narrow gaps between the cars in front of him.  Bob readied his hammer and waited for the first assailant to come into range.  To his complete surprise, his swing was perfectly timed to catch the zombie right in the middle of the skull; it went down hard and stopped moving. 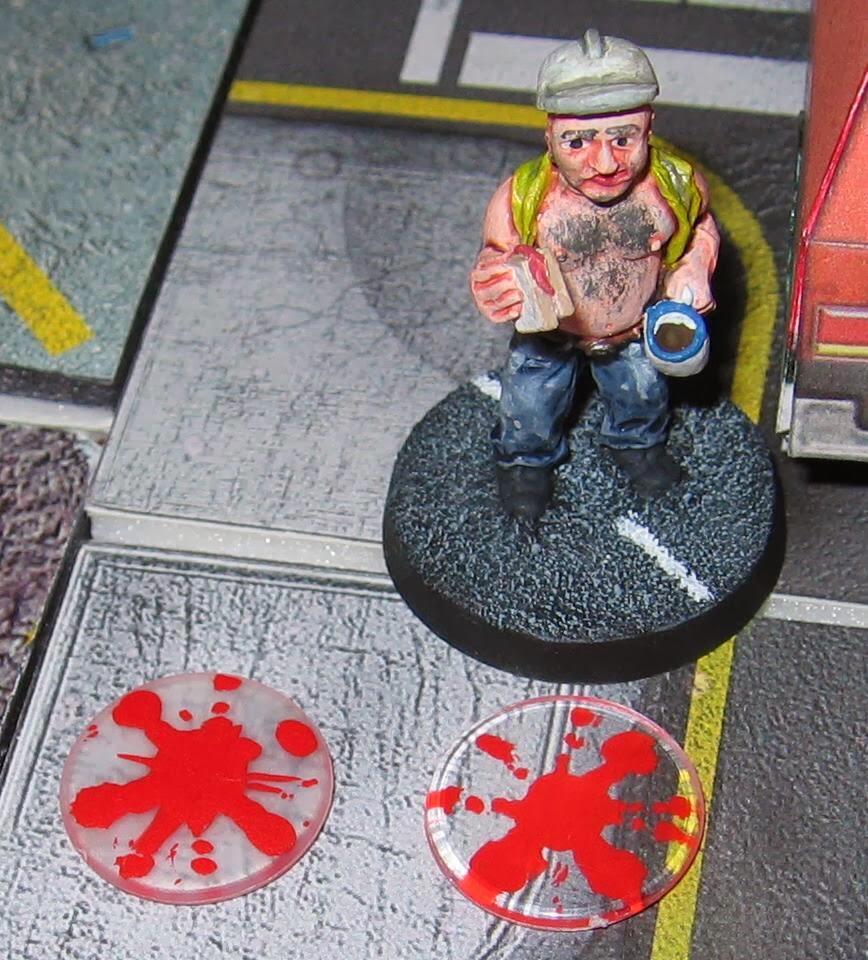 He swung again and once more his hammer hit just the right spot, caving in the zombie's skull and sending it crashing to the ground.  "Huh" he muttered.  "They're not so tough.  It's all in the wrist.  Go, me!" 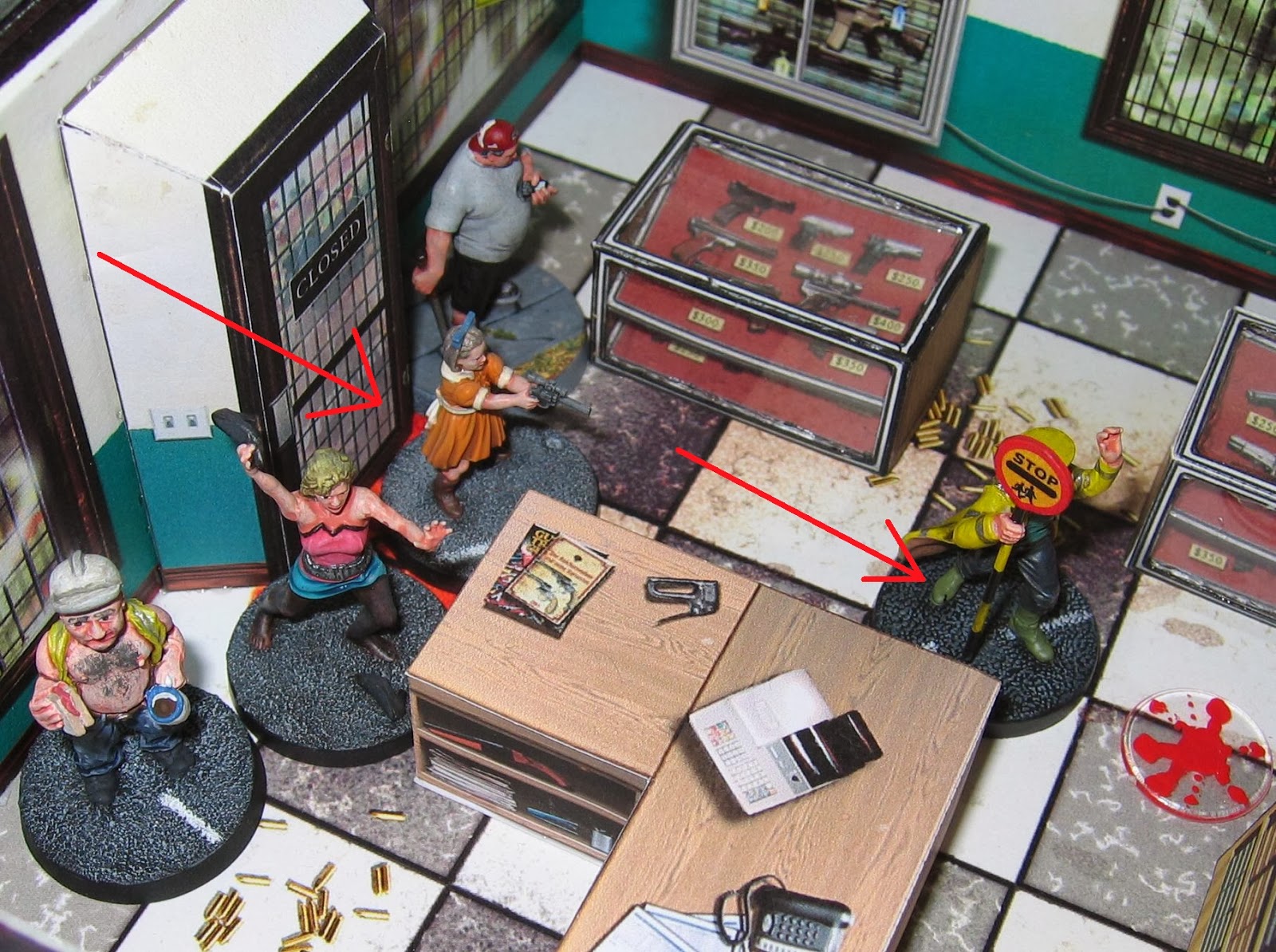 The snarling sounds of the zombies behind him, feasting on Vincenzo brought Bob back to the real world.  Quickly, he ran through the lines of abandoned cars and joined his friends in the gun shop.  Bob was just in time to see Sid charging across the floor and delivering an almighty blow to a zombie with his crossing sign.

Once the immediate threat was neutralised, the team looked around the shop.  Much of the merchandise was locked away in cabinets that they couldn't open, but Michelle took a hunting bow from a rack on the wall.  "I used to be quite good at archery in summer camp" she explained, looking slightly abashed.

Sid rummaged around behind the counter and came up with a bottle of antibiotic pills.  "I wonder why the owner kept them here, in the shop?" he mused.

"Lucy, where are you?" called Michelle, realising that the little girl was no longer in sight.  The child popped her head up from beneath the desk, grinning from ear to ear.  "Look what I found!" she exclaimed.  "It's a real knife!"  It was one of the biggest Bowie knives that any of the adults had ever seen (What are the odds?  Lucy drew the "Machete" card again from the reshuffled Risks and Rewards deck!). 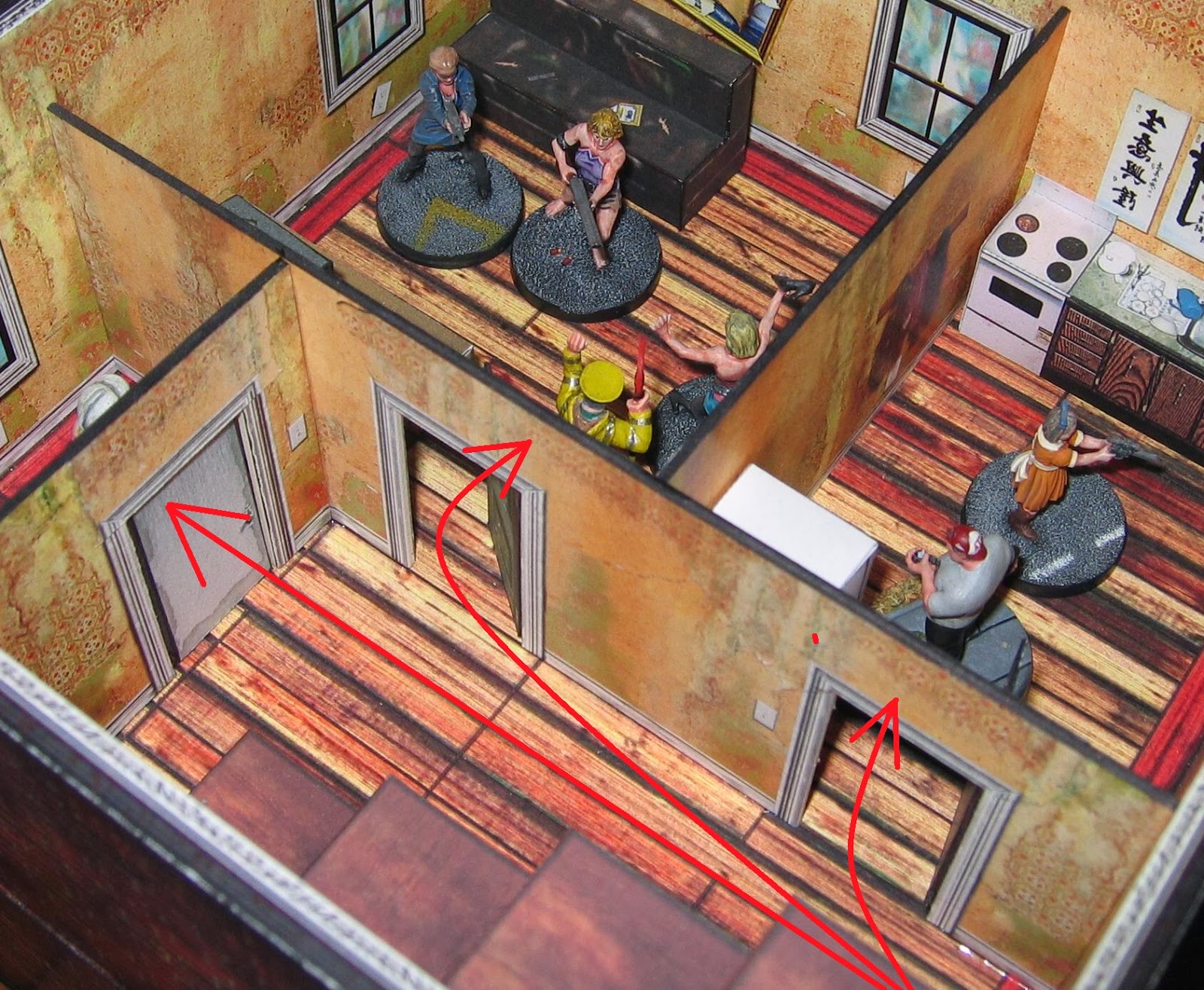 The group moved to search the rooms above the shop.  They split up to investigate the separate rooms, but Lucy's father wasn't anywhere to be found.  Instead, two very heavily armed women (Emma and Jenny) were holed up in the apartment.  Politely, but very firmly, they asked the B-team to leave. 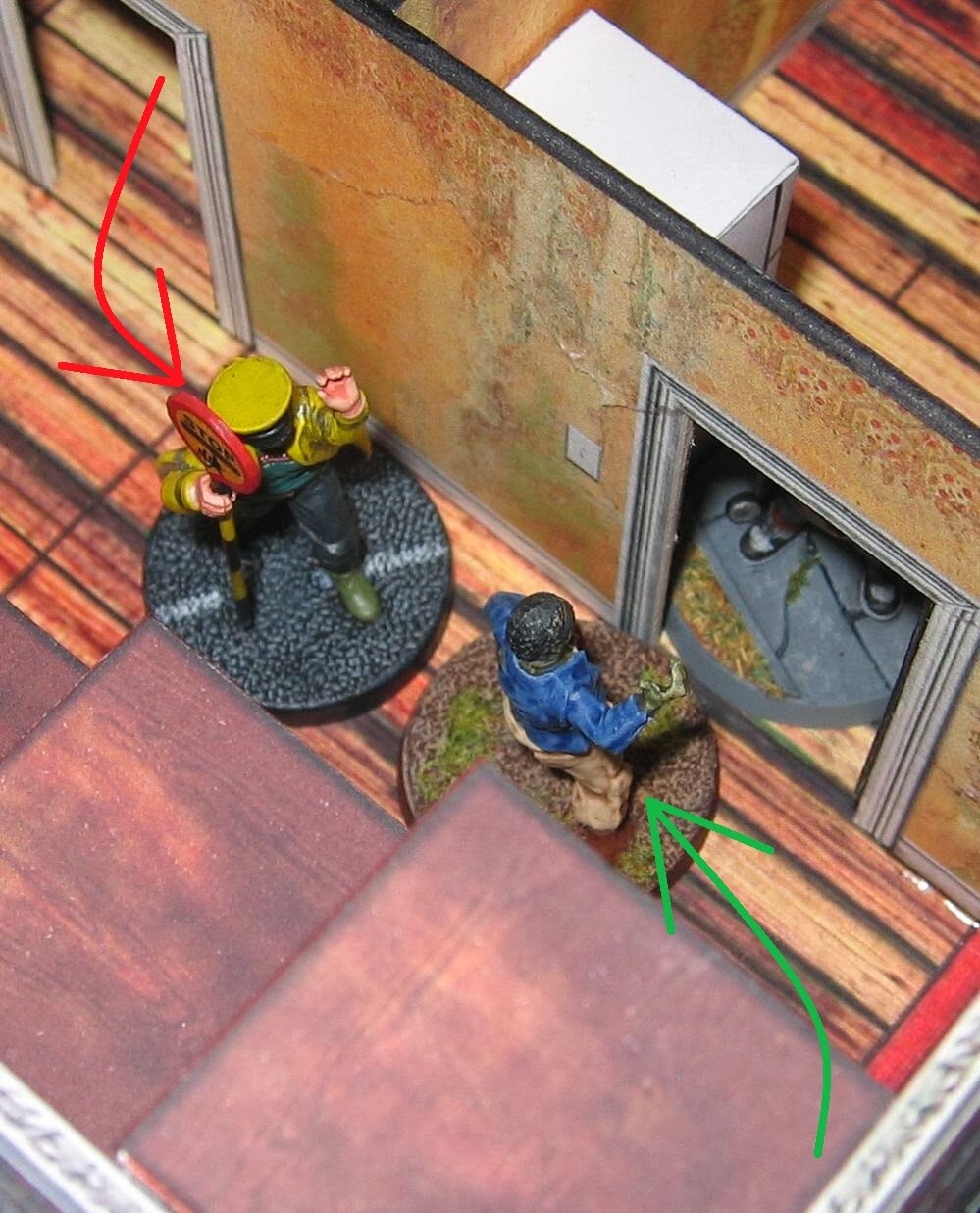 Sid and Ernie's bickering continued, until a zombie heard the noise and followed them up the stairs.  The two friends fell silent as they realised what they had done, then Ernie knocked the creature down and Sid finished it off by jamming his pole where it wasn't designed to go. The street appeared to be empty as the party left "Bob's Bargain Bullets" (because all the zombies were wandering on the other side of the line of traffic and couldn't see the people).  They decided to move on to the adjacent book store, hoping to find Lucy's father there.

On the night of the game, I was going to finish at this point so as to have plenty of time to pack up.  The hall we hire is used by some dance group immediately after us and therefore we need to be out promptly.  Often we're a bit slow in halting the play; it usually takes longer to pack up than I have allowed!

However, this time the players remonstrated and pointed out that we had a few minutes more.  We played on for a little, but in a considerable hurry.  Rather than present photos of the action within the book shop (which is an "empty shell" build anyway), here's a quick summary:
So, here's a dilemma; one that I've never faced before.  I probably shouldn't have continued the game - we were in too much of a rush and mistakes were made.  I imagine that we played some rules wrong as well as some of the hasty tactics being flawed.  But the truth of is that we did play on.

Do I let the results stand (i.e. 2 party members zombified and the others fleeing - a failed mission), or should I only count up to where I had initially wanted to halt (where everyone was still alive and the mission was a minor success)?  What do you think?  Live or die?  The game length that was intended or what was actually played?
Posted by Colgar6 at 20:51