SoBH: Robin Hood and the Bishop of Lichfield

It's Tuesday evening again, but this time I've no doubt about what game to host at my local club.  I've already trailed that I'll be running Song of Blades and Heroes.  We'll use my fresh Robin Hood & Sheriff of Nottingham warbands (initially described here, but adapted slightly since then).  OK, that's the easy bit - but I still need a scenario.

I had been thinking of an archery tournament in or near a town.  However, in the end I decided that I hadn't got the time to develop special rules for the tournament itself (i.e. before the battle itself kicks off and everything becomes a free-for-all).  I still want to run such a game, but it'll have to be for another time.  So, I need a new idea...


With relatively little time to prepare, I decided to adapt one of the scenarios from the rulebook: Treasure Hunt.  I can't remember if this is from Song of Blades and Heroes or from Song of Arthur and Merlin, but that doesn't really matter.  In the standard scenario, 2 warbands race to examine 3 possible locations for treasure; when the loot is discovered then one side wins by carrying it off. 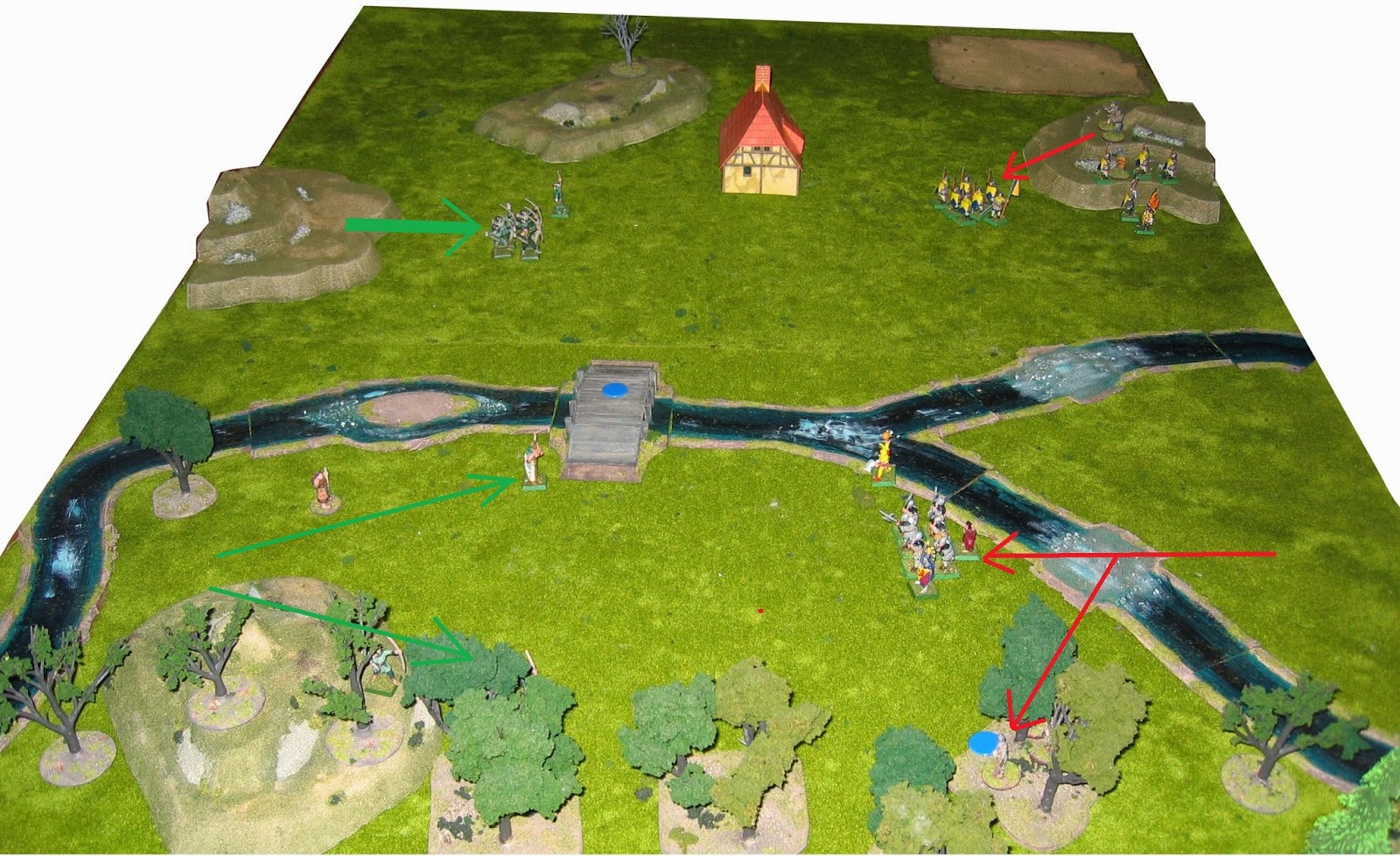 In the north, Robin's group advanced in a tight phalanx, taking full advantage of the automatic action that a model can take in Song of Blades and Heroes when sufficiently far away from all enemies.  For some reason best known to himself, Guy of Gisborne only advanced some of his force towards the outlaws in response.

The Sheriff split his force: most of the troops accompanied him and Yorik while a smaller detachment entered Sherwood Forest to search for the Bishop.  However, the churchman wasn't hiding amongst the trees.

Little John himself made a dash for the bridge.  His outlaws moved forward, skirting the edge of the woods and ready to dive into the cover of the trees if the enemy came too close. 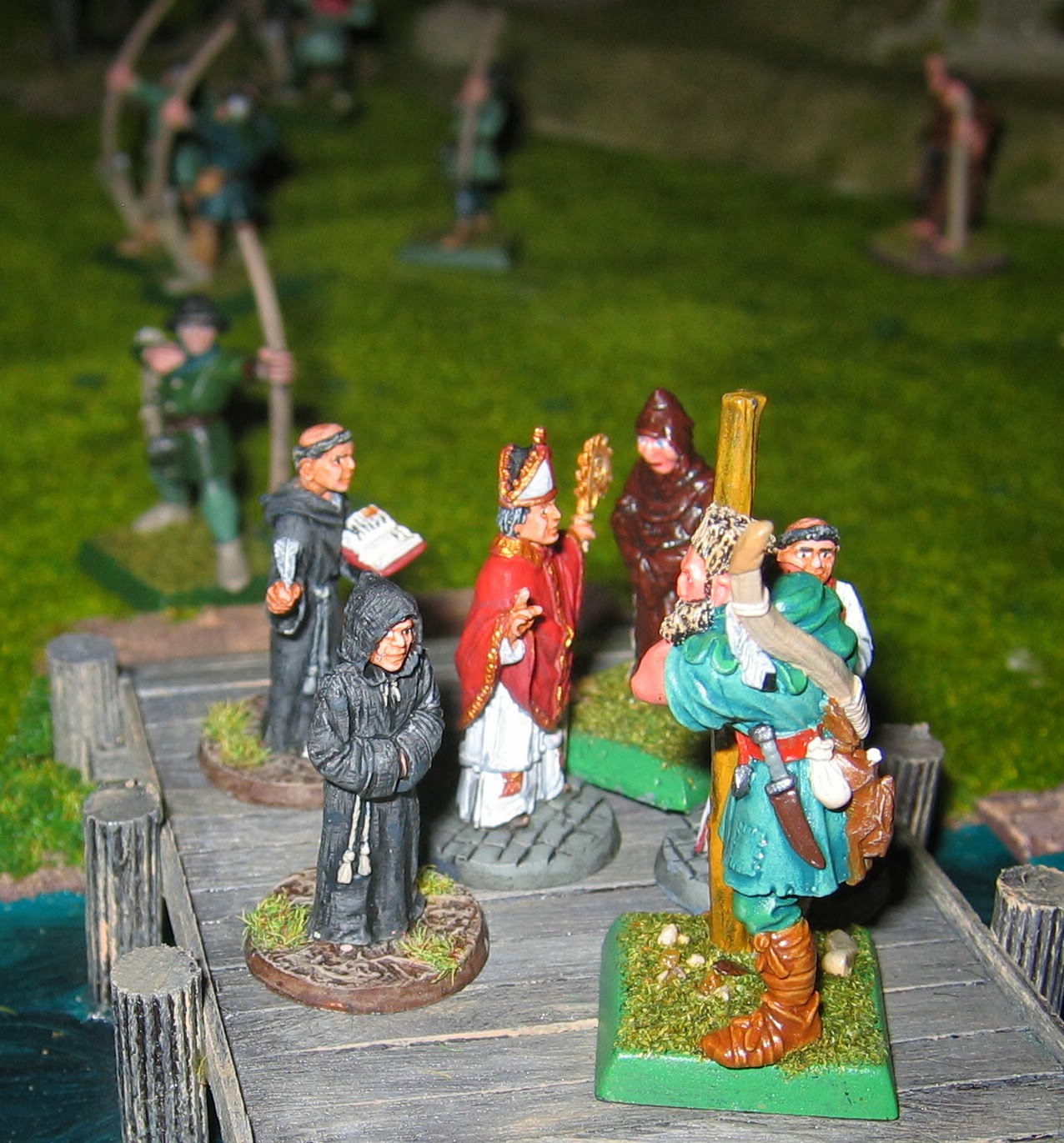 Little John ran to the middle of the bridge, only to discover that the bishop and his priests were sheltering beside the structure.  They clustered around him, demanding help and praying that he wouldn't hurt them! 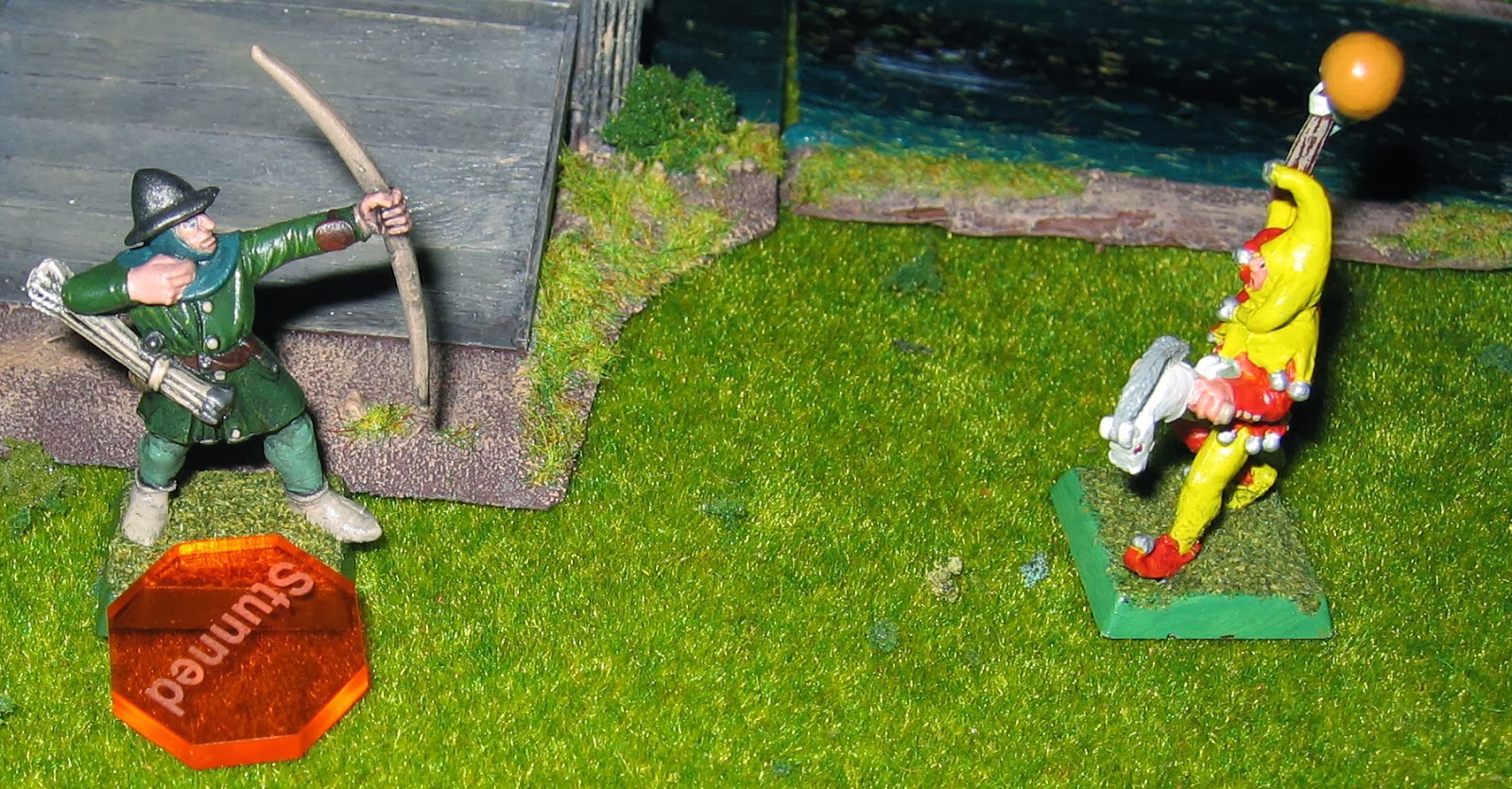 Even as John's men spread out to form a ragged firing line, Yorik came bounding towards one of them.  He turned cartwheels, threw insults, juggled and cracked jokes; this performance so entranced the nearest outlaw that the man could only stand, open-mouthed and stare at the jester. 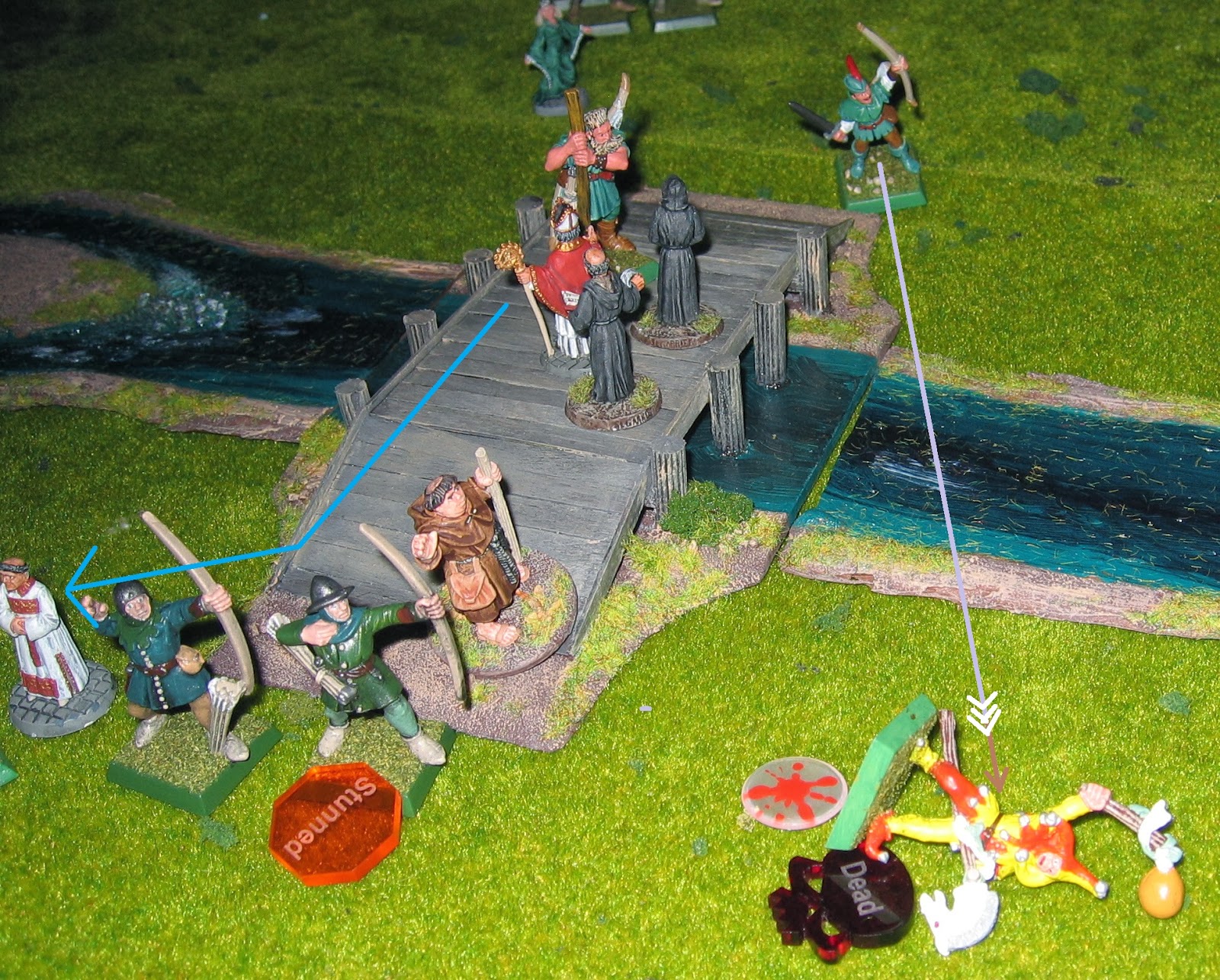 Little John tried to make his way back across the bridge in order to help his man, but he found his way blocked by churchmen.  His bellow of "Out of my way" sent 2 of them scattering, but John still couldn't move far enough.  Friar Tuck and other Merry Men were racing to assist, but it was Robin Hood who acted first.  He drew back his bow and aimed at the jester.  Despite the little man's acrobatic dodging, Robin's arrow killed him.  Not only that, but it was a gruesome kill in SoBH terms [I guess that Robin Hood doesn't have much of a sense of humour, then!].  That meant any friends of Yorik who were within "Long" distance would have to take a morale test. 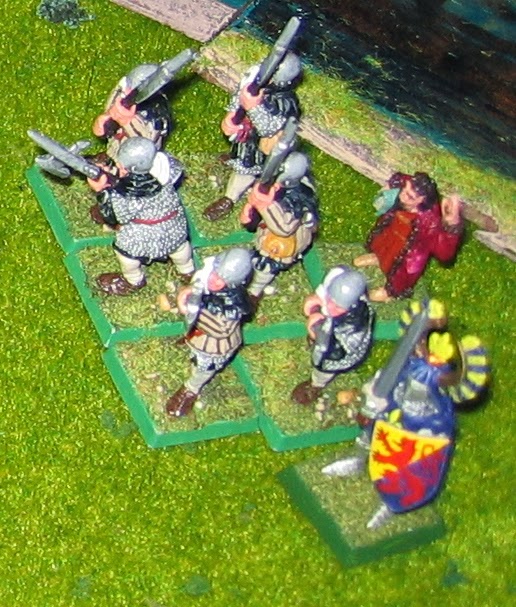 At this point, we were horrified to discover that Sir Stanley and 6 men-at-arms were within 'L' of the death.  The Sheriff himself was just beyond that distance and would therefore be immune to the effect.  Why were we horrified?  Because the Sheriff had the Evil attribute, which meant that he would automatically kill any weakling who took so much as a step backwards, but only if they came within 'Short' distance of him whilst doing so.  All the Sheriff's men in this group were within 'S' of him...

In the inevitable disaster, first two men broke and ran.  The Sheriff promptly knifed them in the back, at which point the others had to take 2 further morale tests (for seeing their buddies killed in this manner).  More men tried to flee; they were also slain for cowardice and so on.  By the time the cascade had finished, the Sheriff stood alone behind a pile of bodies... 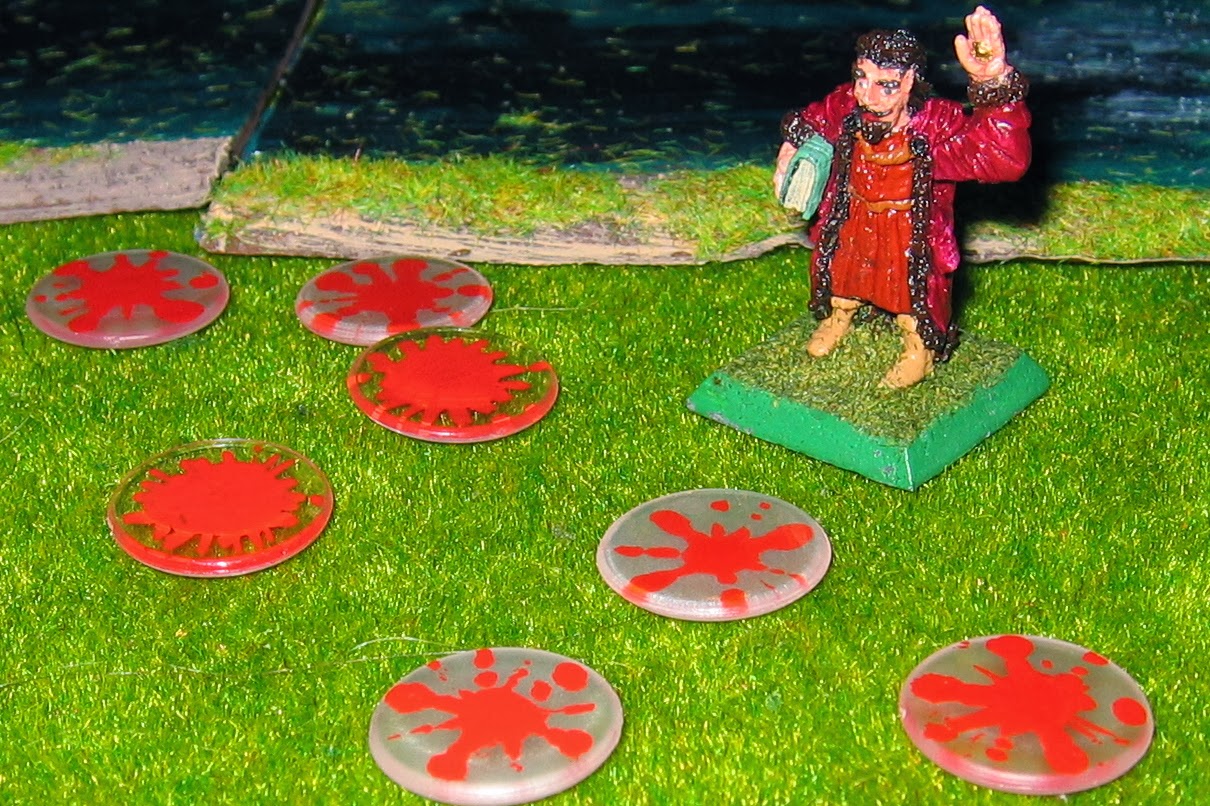 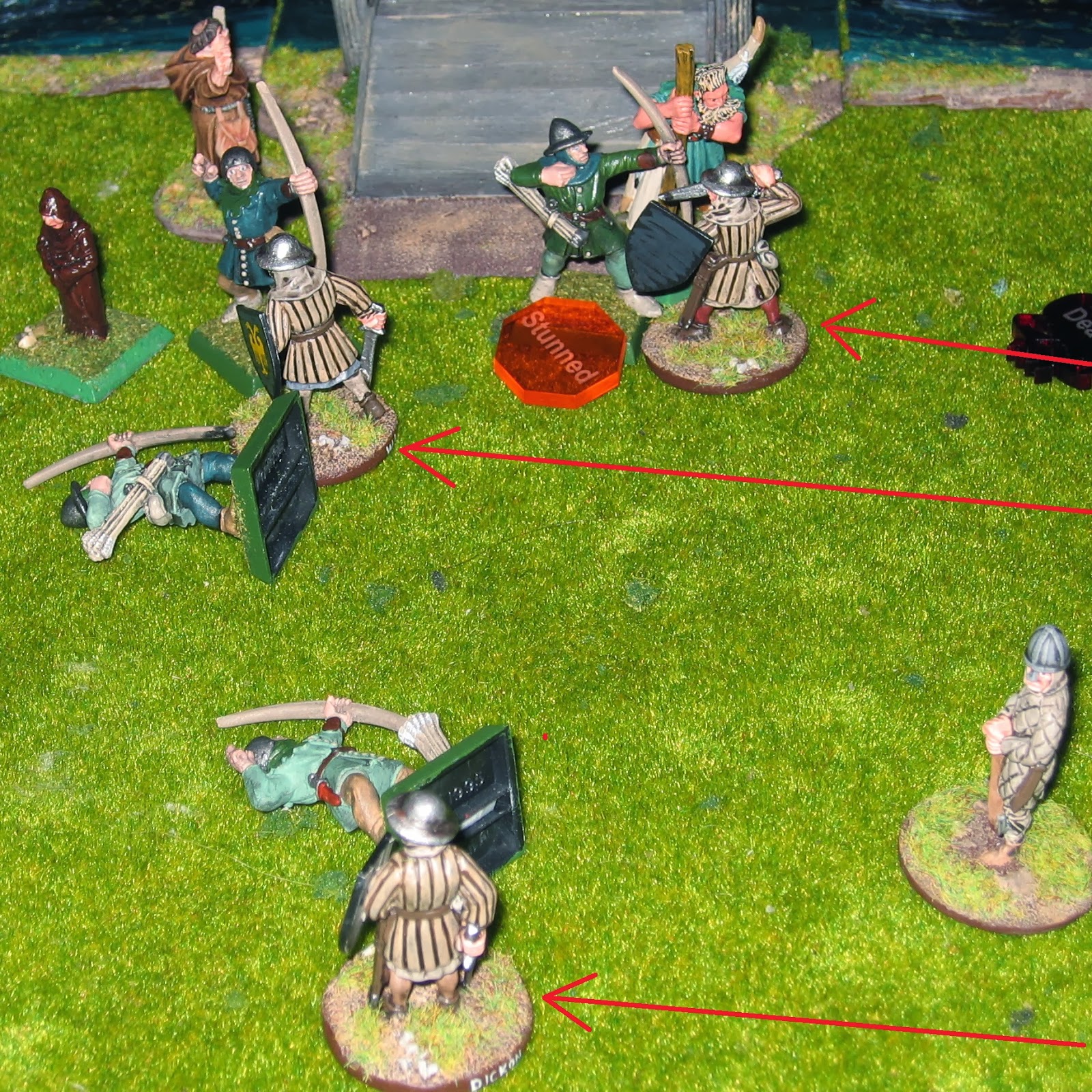 After the Sheriff's little temper tantrum, you'd be forgiven for thinking that his force was spent.  However, he seems to have motivated his remaining troops considerably by the deed.  He walked over to the small detachment in the woods and ordered them to attack the outlaw scum.  This they did with alacrity [a group move with 3 activations, followed by some very high combat rolls].  Following this charge, 1 outlaw was dead and 2 were on the ground and in trouble.  Only the one who had been befuddled by the jester managed to defend himself, even though he was still confused. 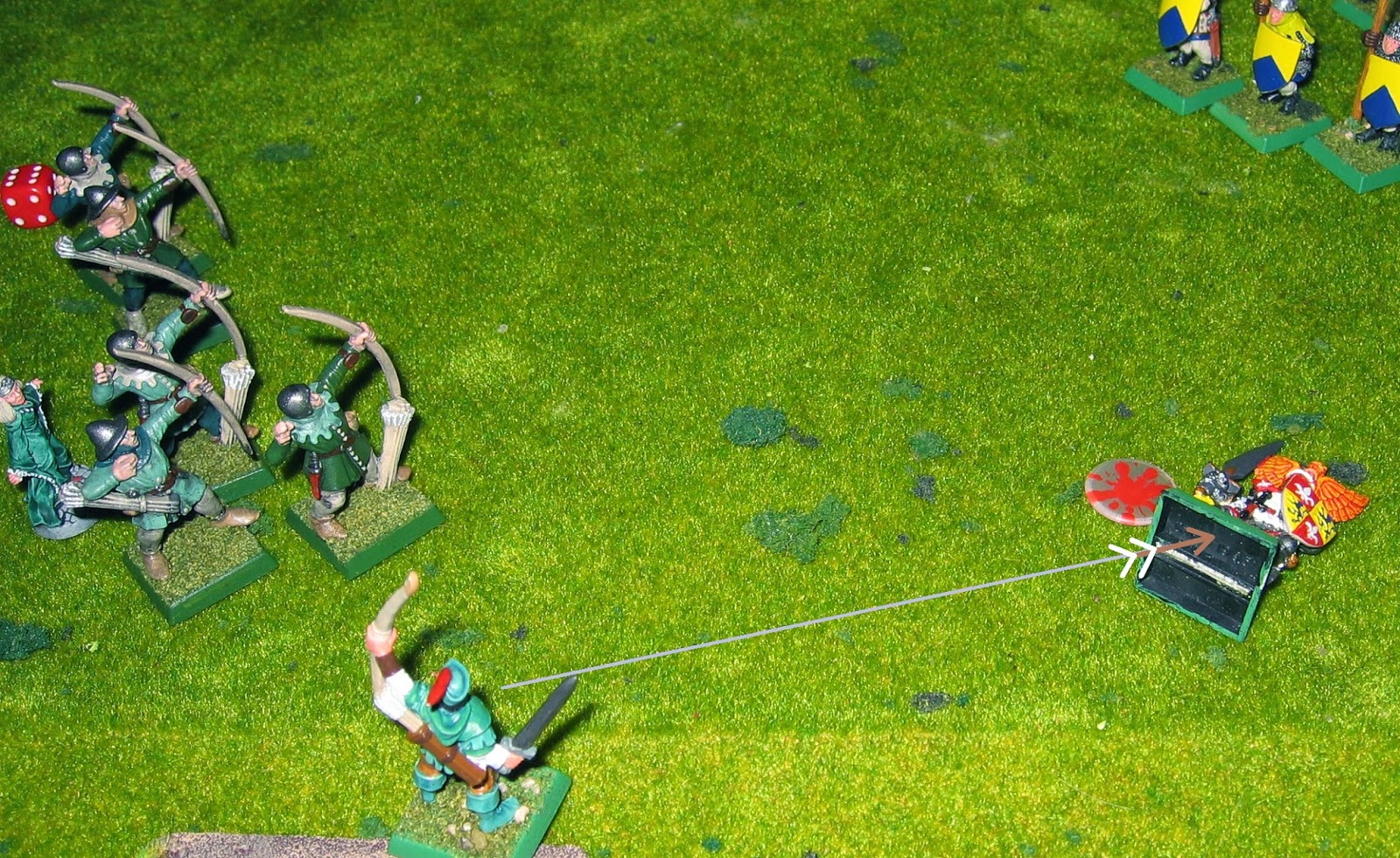 On the far side of the bridge, Robin and his men were lined up and waiting for Guy's troops to come into range.  Marion hid behind the line; one of the crossbowmen had taken a pot shot at her earlier and even though the range had been long and the bolt had missed, there seemed little point in taking risks.

When Guy eventually came into close range (he and his troops were advancing with glacial slowness), Robin took a single shot at him and killed the knight outright. 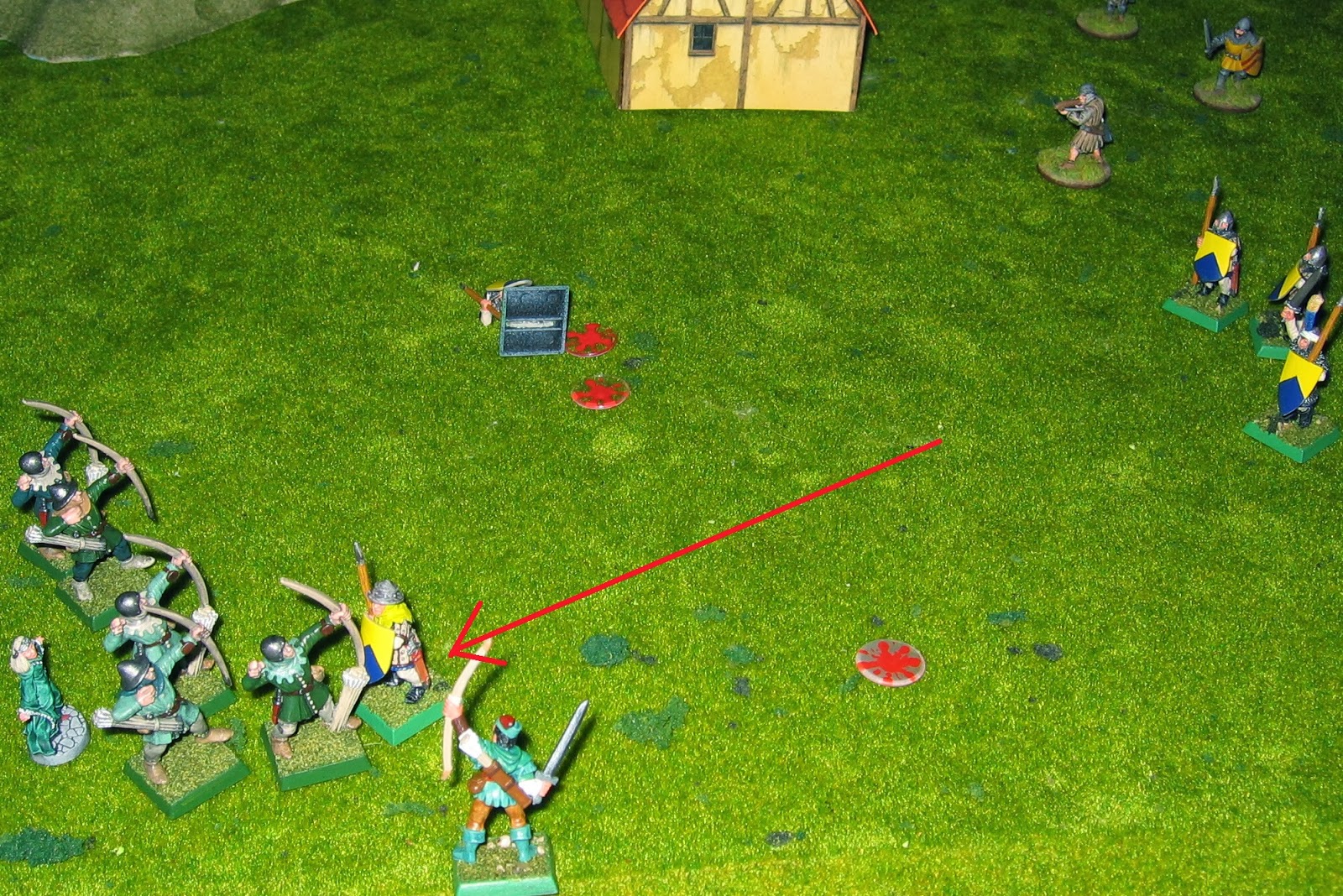 A single spearman did eventually contact Robin's troops, but he was swiftly overcome.  A few more were shot down individually, whilst the bulk of them just hung back in a confused mob.


Back on the south end of the bridge, the fighting was desperate.  The Sheriff's men were on the rampage, as they killed several more outlaws. The last outlaw was on the ground and outnumbered, so things didn't look good for him.  In the best Hollywood tradition, as his assailant raised his sword to strike the fatal blow, the outlaw lunged from underneath and stuck his dagger into the soldier's ribs [a massive upset, even allowing for the men-at-arms being Rabble and therefore easier than normal to kill]. 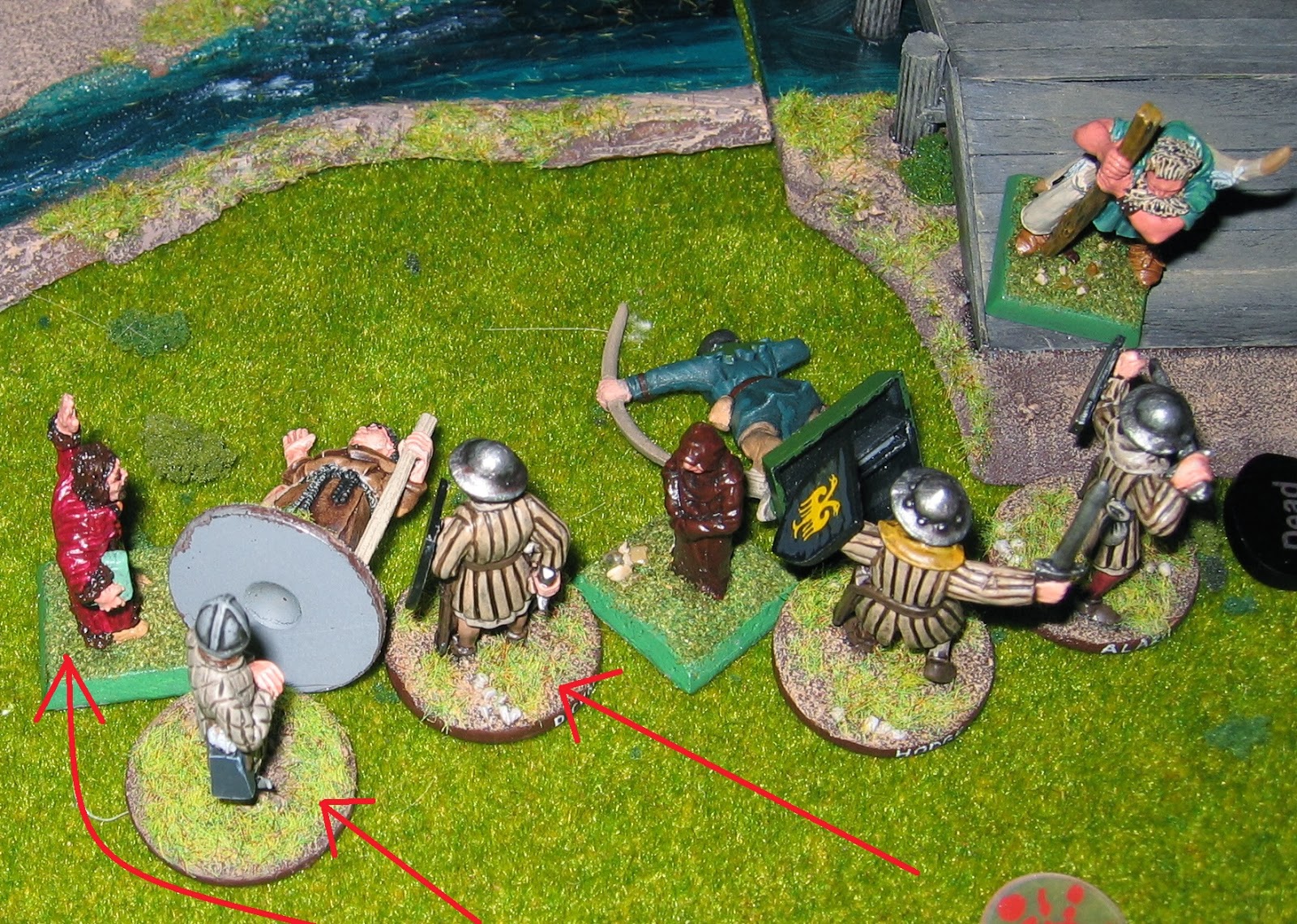 Sensing a possible victory nevertheless, the Sheriff and 2 of his men caught up with Friar Tuck and knocked him down.  They then proceeded to give him a good kicking, but the feisty friar just managed to survive. 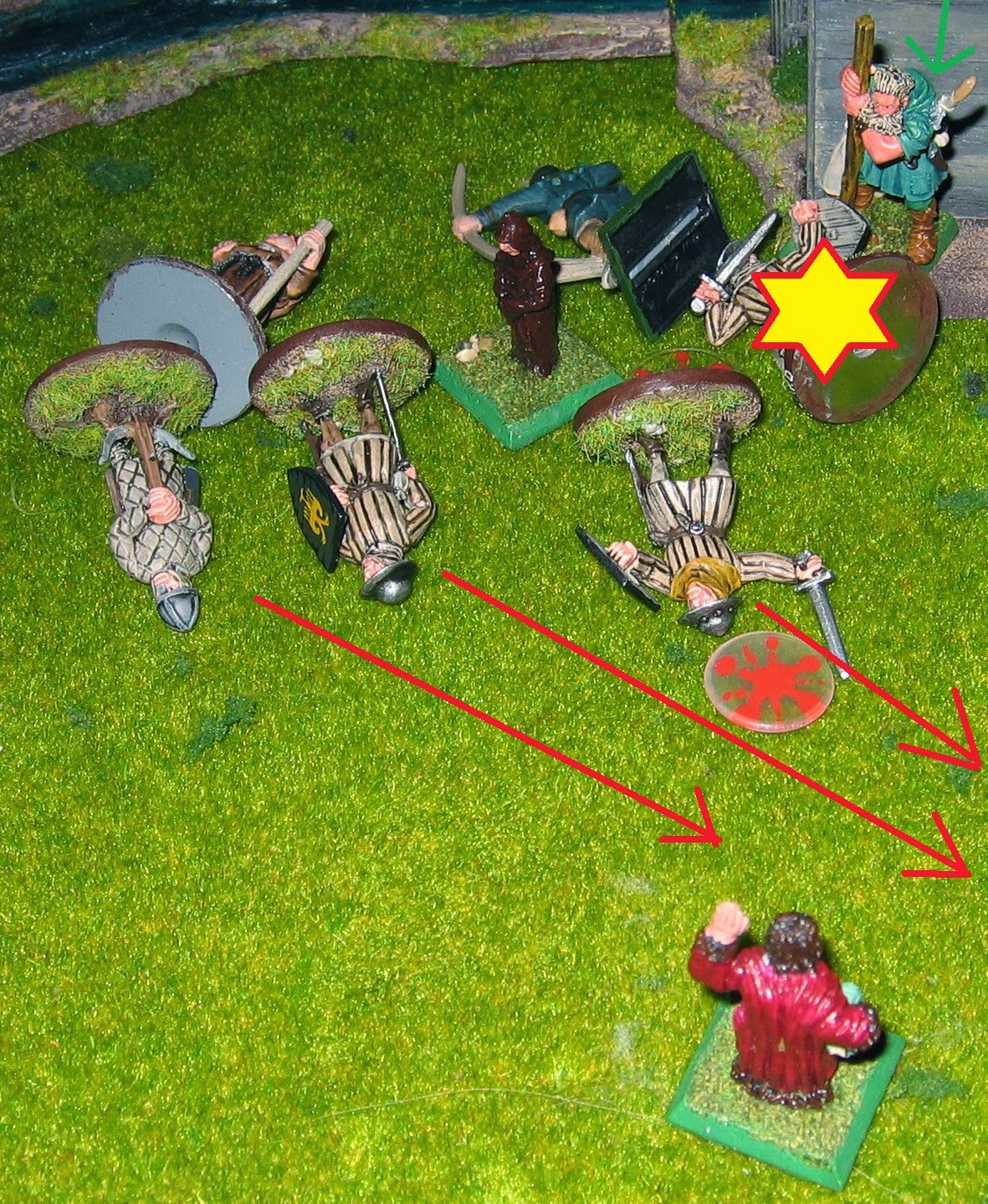 In the last act of the game, just before we had to pack up, Little John charged down the bridge.  He gave his opponent an almighty thwack with his quarterstaff, scoring a gruesome kill.  Tragically, the Sheriff had moved back a bit after failing to kill Friar Tuck.  Once again this evil man saw his own troops running away close to where he stood.  "Cowards!  Dogs!" he yelled as he slew them all mercilessly.  This was a fitting point to end the game...

This game was enormous fun and much enjoyed by all the participants.  On balance, I think I have to give victory to the Merry Men - after all, they still have all their characters and over half of their troops left.  The Sheriff was the only man left standing of his group (he'd killed most of them himself!) and Guy's band was suffering as well.

It seems that an Evil Leader is a tricky character to play in SoBH.  On the one hand, you want to be within "Long" to motivate your followers.  On the other hand, if they flee within "Short" of you then you'll kill the cowards yourself.  It's a fine line (and who'd be part of such a man's entourage)!
Posted by Colgar6 at 20:54