In the last game of All Things Zombie that involved the B-team (here) Bob, Ernie and Sid managed to escape from a police station that was besieged by zombies.  Just ahead of them, a little girl (Lucy) and a stranger (Michelle) had also managed to run away.

Now that they've put some distance between themselves and the zombie horde, Michelle and Lucy have stopped running.  It's time for some explanations:
"What's your name, dear?"
"Lucy"
"And how old are you, Lucy?"
"I'll be seven next month.  My daddy told me not to speak to strangers, you know"
"Well, I'm Michelle.  There - we're not strangers any more.  Um, where is your daddy, anyway?"
"He went out to do some shopping.  He said I should stay home, but it wasn't safe there.  The bad people were all around and so I came out to rescue daddy".
"OK, I think we need to try to find your daddy.  There are some shops in the next block; do you think he might have gone there?"
"Maybe..." 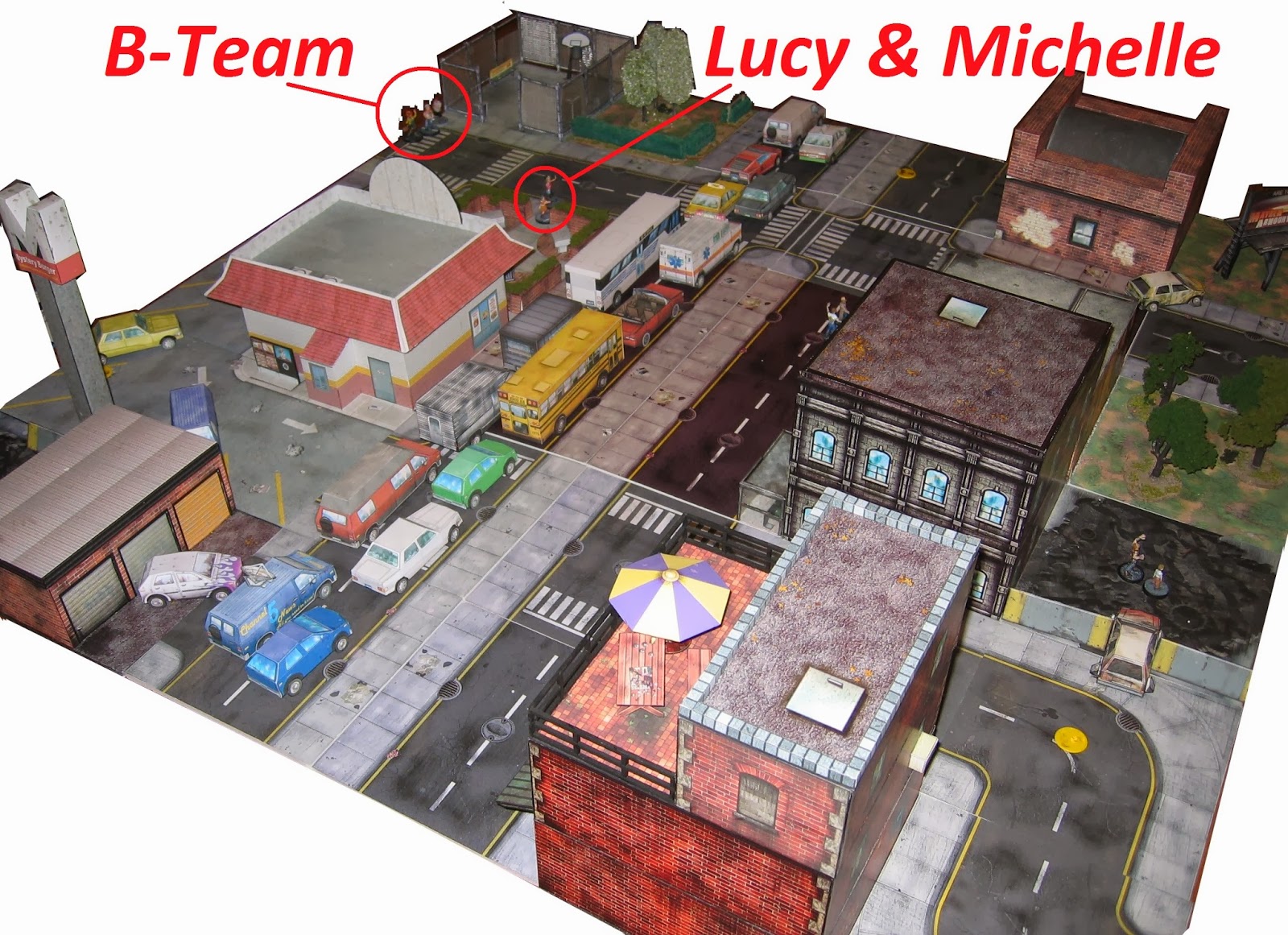 The player characters (B-team, Michelle & Lucy) are to the north of a main road.  On the other side of the street are several shops, but the route is obstructed by a large number of abandoned vehicles.  There are a few zombies wandering about and 3 PEFs (possible enemy forces) are also present.

Victory is determined by searching for Lucy's father.  If one or more civilians are discovered anywhere then he'll be amongst them on a roll of 5 or 6.  The players don't necessarily have to find him, but they have to make a reasonable attempt.

This is not a high-powered zombie-hunting team!  Rather, they are all citizens in the relatively early period of the Z-apocalypse (it's Z-day+21), just trying to survive. 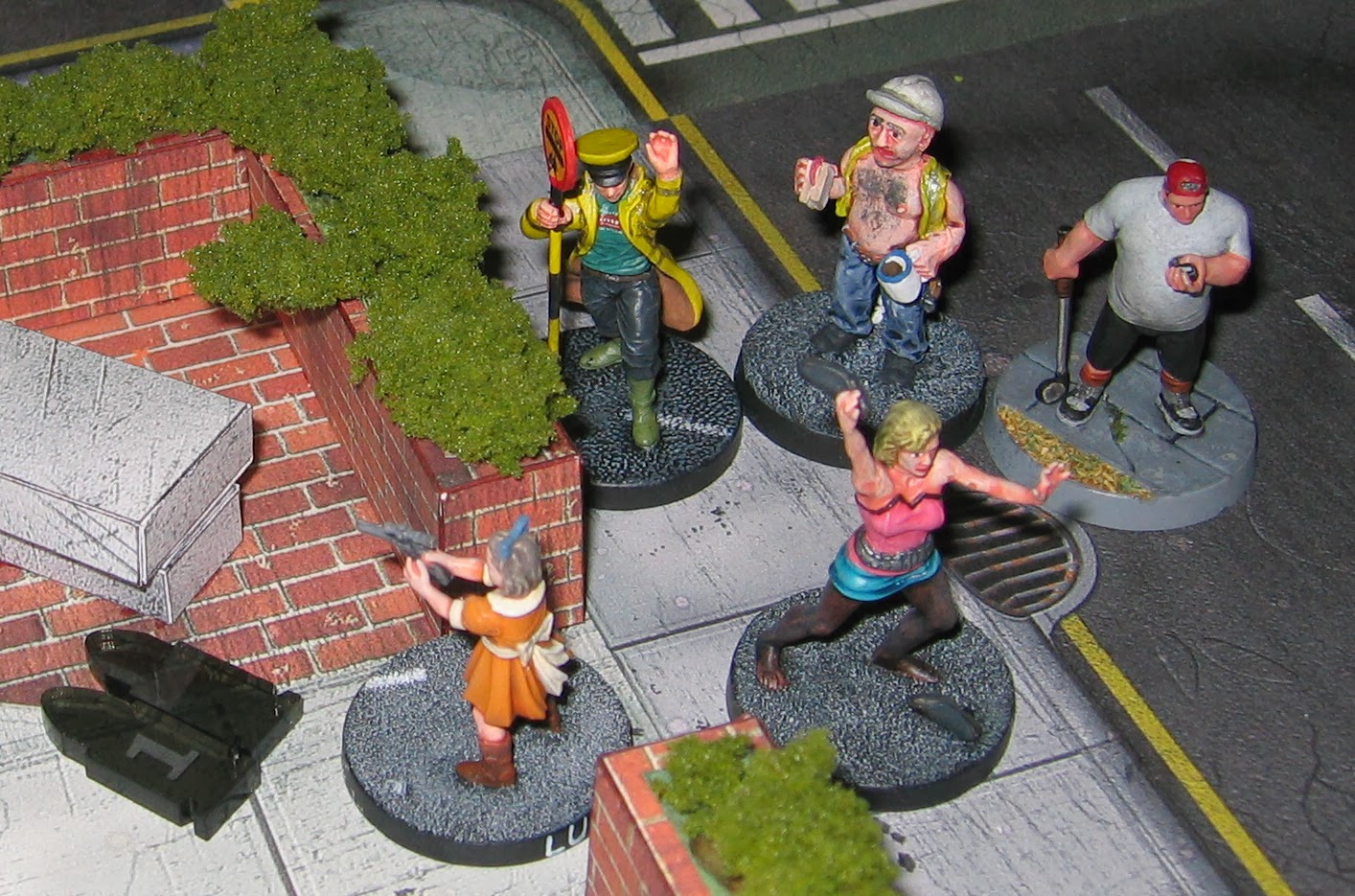 While Michelle was wondering what to do next, the B-team quickly caught up with the ladies.  "Need a hand, love?" called Sid.
Ernie quickly interjected "Ah, what my friend means is that we'd all be safer sticking together.  Especially after what we've just been through."
"Well..." was as much as Michelle managed to answer when there was a deafening bang from just beside them, closely followed by another.  The adults looked round and were horrified to discover that Lucy had braced her pistol on a nearby wall and was firing at something.

Bob, whose knowledge of building techniques was considerable, stared at the nearby burger bar.  "'Ere, that middle window isn't in its frame properly", he said.  "I reckon they were in the middle of replacing it and never finished the job".

The others were interested more in something much closer, though.  The closest PEF turned out to be 3 zombies who had just come round the building and were approaching rapidly.  Little Lucy's shots had been wide of their target and had only served to encourage the shambling creatures. 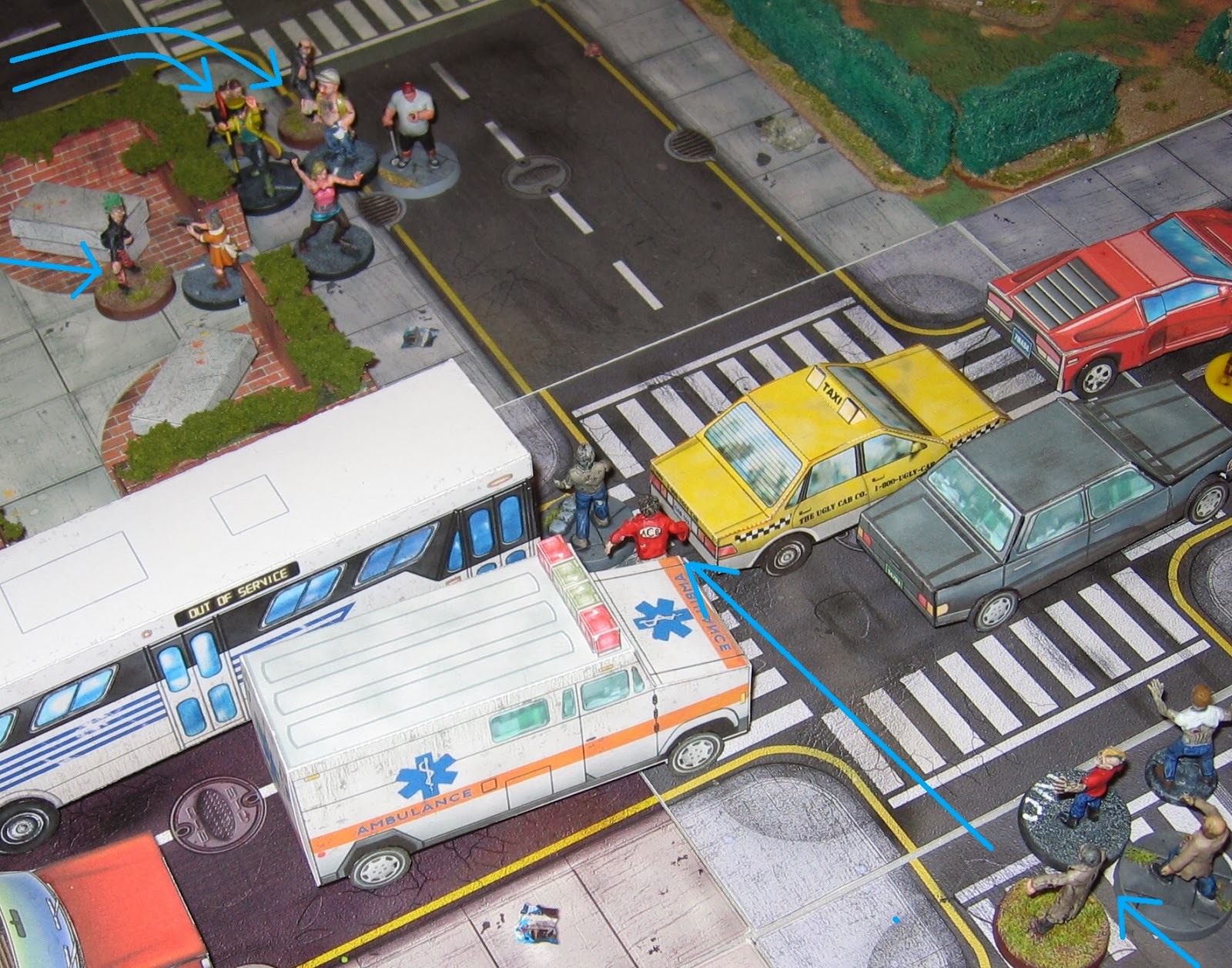 Even as the 3 zombies charged to attack, others were coming through the lines of vehicles to find out what had caused the noise.
Surprisingly, Bob, Sid and Lucy all passed their "brown pants" test and stood to receive the attacks.  Things didn't look at all good for the humans, especially for Lucy (at REP 2 and without a melee weapon, she'd roll 1 dice in melee plus 1 automatic success, whereas even a single zombie rolls 3 dice).  Bob fended off his attacker with his hammer and Sid whacked the zombie he was facing with his crossing pole.  Amazingly, Lucy side-stepped deftly and tripped her clumsy assailant as well (must be the effect of all those early dance lessons!); all 3 undead ended up on the ground. 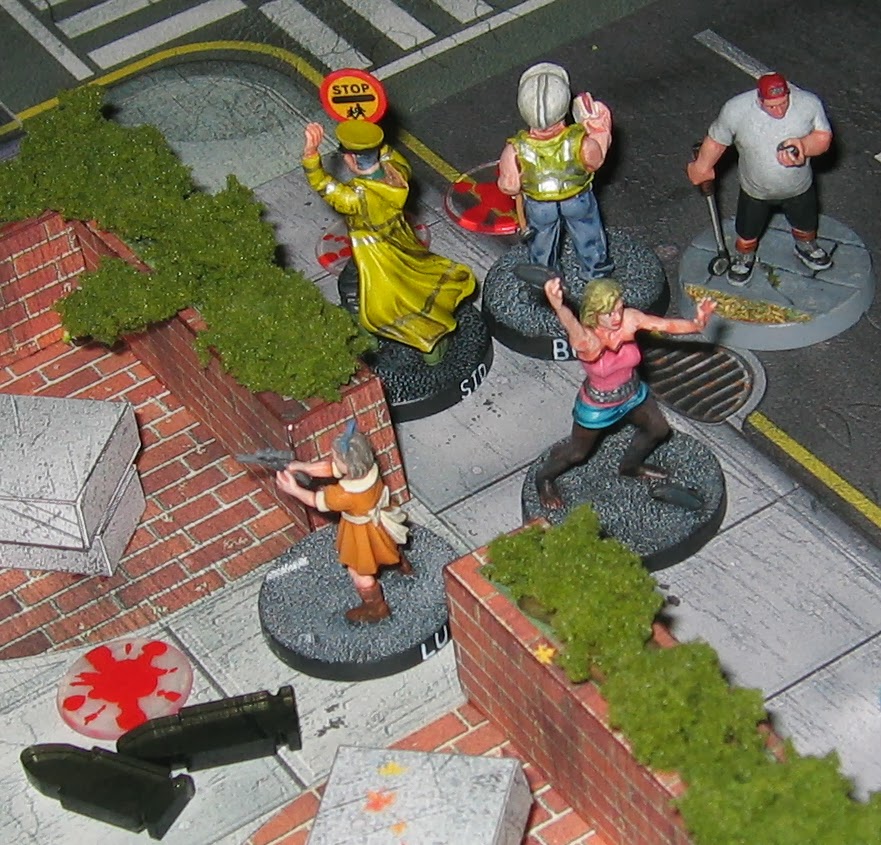 There was another loud roar as Lucy pointed her pistol at the fallen zombie's head and pulled the trigger.  Bob and Sid laid into their foes with pole and hammer and finished them off too.

The humans then looked up and saw how many more zombies were approaching.  "Eek!  Run, everyone!" called Ernie, so the party sprinted towards the building.  They knocked aside the unfinished window and entered the burger bar.  The zombies followed, but slowly.

Inside the restaurant, the party felt safe enough to have a quick look around.  Michelle noticed a handbag amongst some abandoned clothes at one table.  "That's a Chloé!  I'm having that..." she muttered, as she scooped it up.  Ernie found a "Legends of Manchester United" football DVD which he pocketed surreptitiously.  But it was Lucy who surprised the adults, though.

"What have you got there, dear?" asked Michelle.
"A knife" replied the girl, holding up a large butcher knife that she had retrieved from a drawer in the kitchen.
"Um, perhaps I'd better look after that for you?"
"No!  I found it - it's mine!"
"Er, OK then." 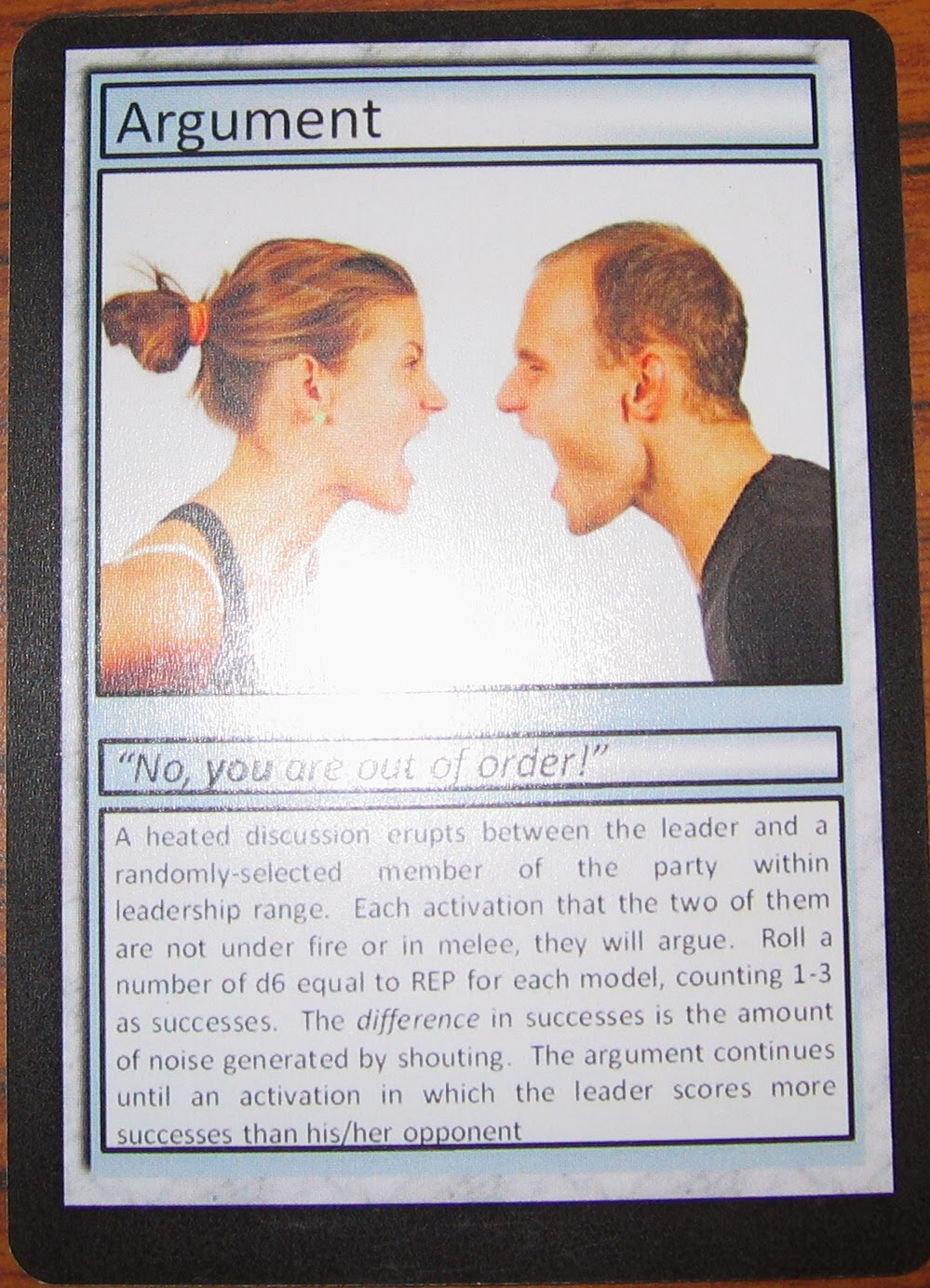 At the same time, Ernie muttered to Sid "You shouldn't have said that to her, back outside.  It was disrespectful, you know."
Sid replied "What are you talking about?  Don't you have a go at me; I haven't done anything wrong!"
The pair of them muttered and grumbled about what was appropriate when talking to a strange woman for most of the rest of the game, with neither prepared to give way.  Fortunately for the rest of the party, the disagreement was fairly low key and not especially noisy. 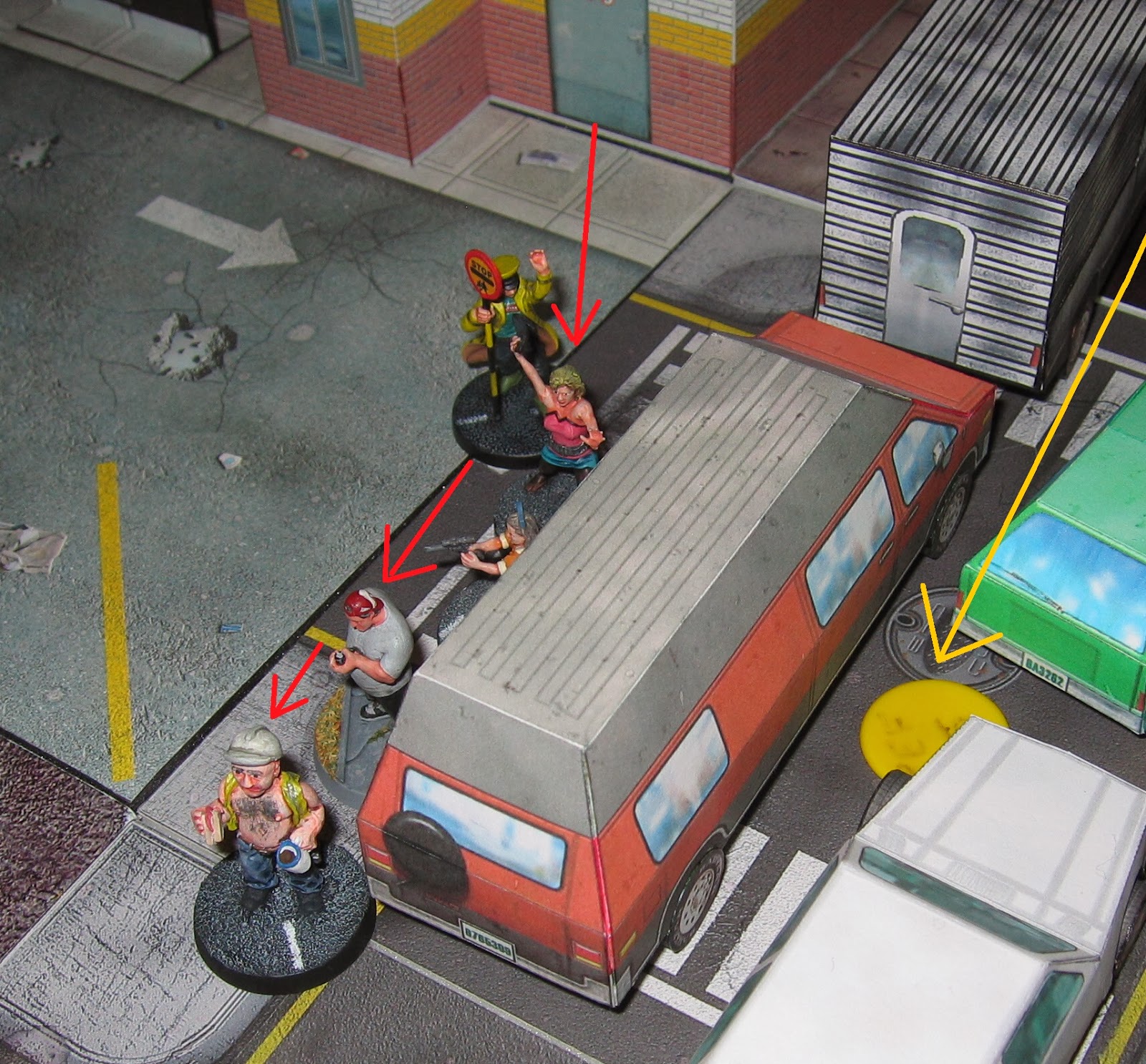 The humans left the burger bar by the employee entrance at the back.  For the most part, they were quietly optimistic.  The zombies were well behind them and several of them had found interesting items to play with.  However, the players failed to notice that they were being stalked by a particularly enthusiastic (REP 5) PEF; it was just the other side of the nearest camper van. 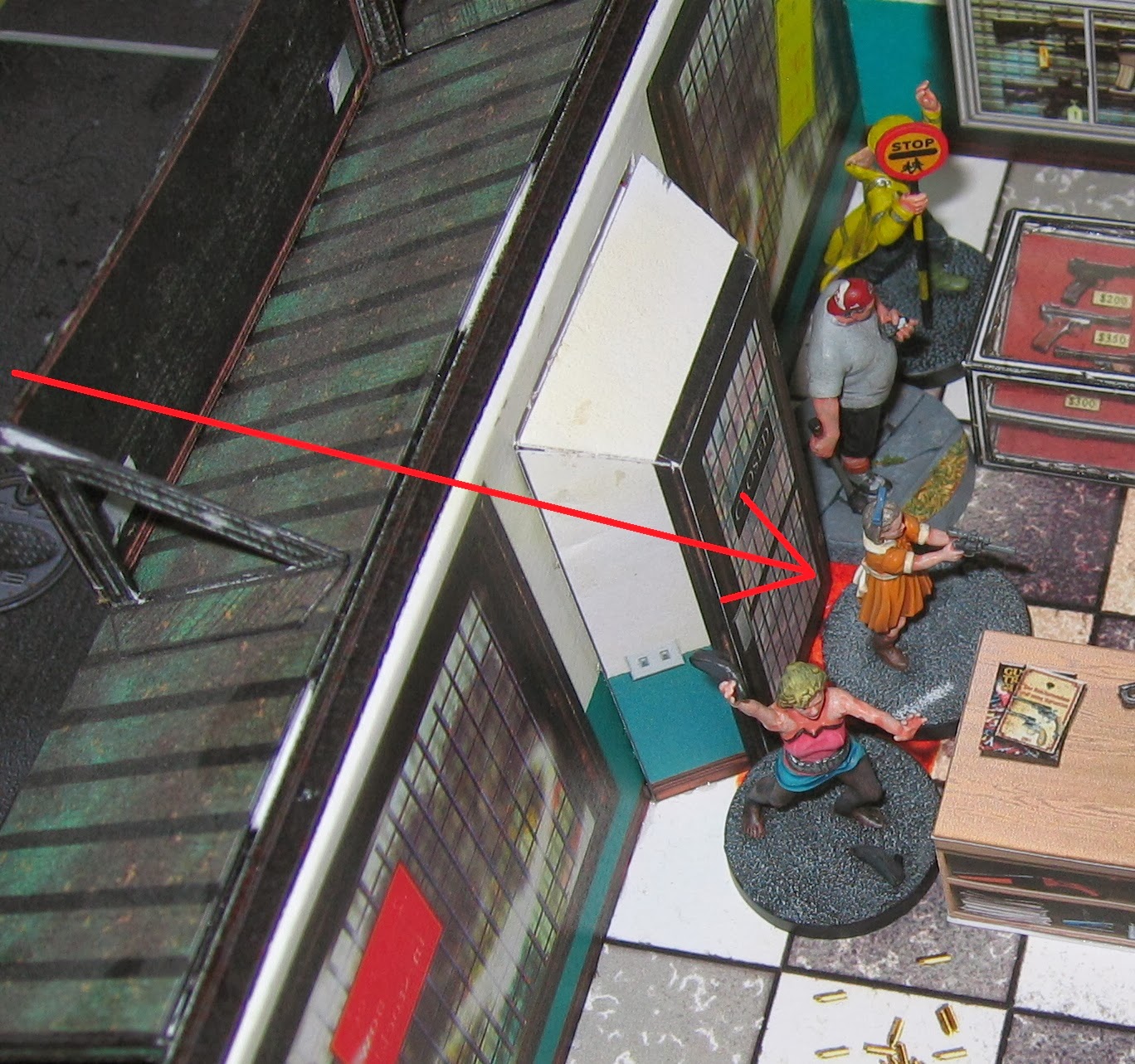 They carried on blithely, across the street and into the nearest shop (an armoury called "Bob's Bargain Bullets").  Only when they got there did the group realise that Bob wasn't with them.  Ernie, the leader, had been concentrating so much on arguing with Sid that he hadn't realised they'd left Bob behind. 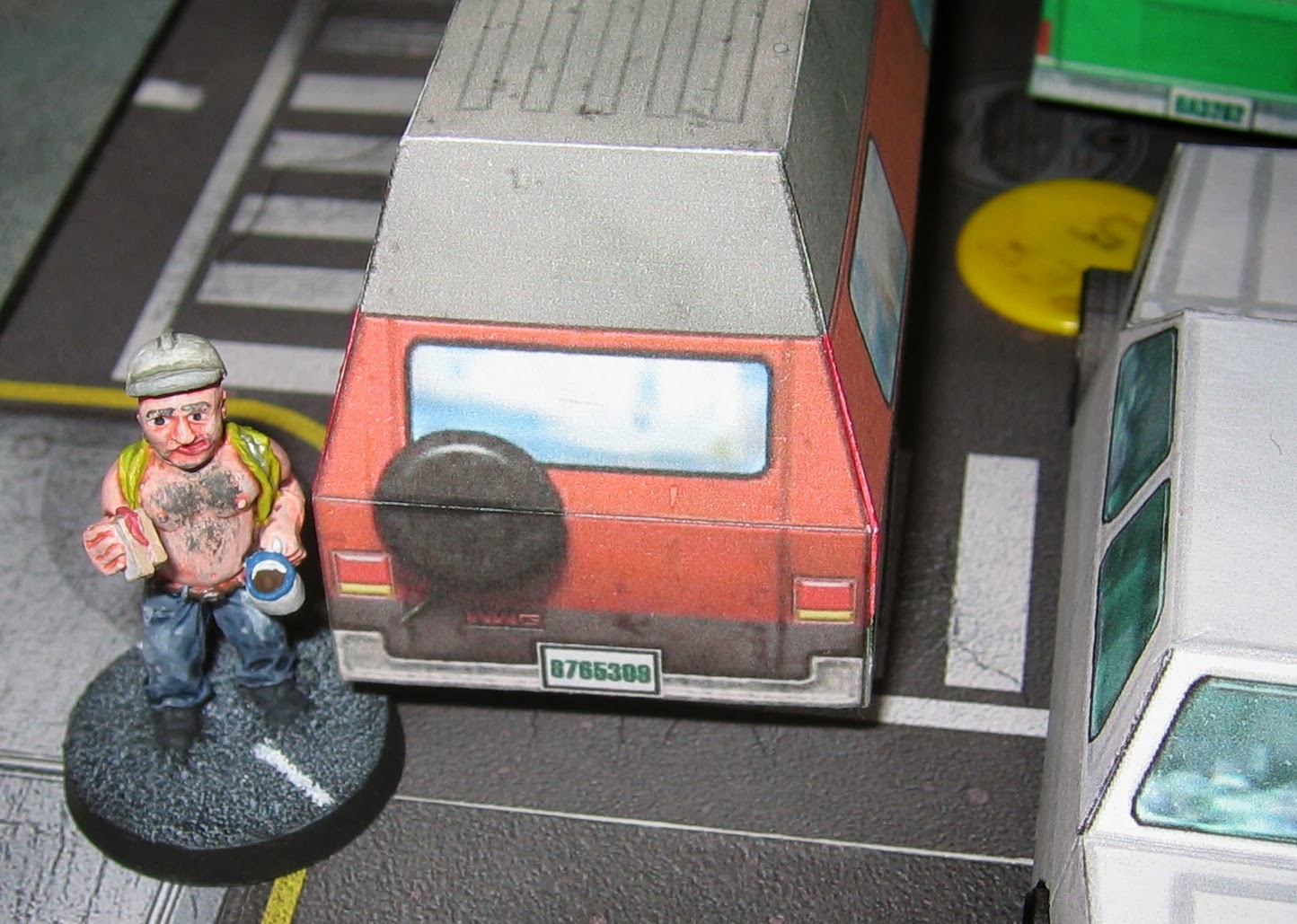 Bob had been daydreaming about his next bacon roll (i.e. he'd failed his "dumbass" roll) and hadn't noticed that the rest of the group had gone on without him.  He was left to face the PEF all on his own!