Ever since I produced my Witch Hunters, I've been itching to use the Song of Blades and Heroes rules for other settings as well.  I have several sets of warbands coming along soon, but the ones closest to completion are Robin Hood's and the Sheriff of Nottingham's groups.  Indeed, I'm planning to use these at the next meeting of the Helensburgh games club, on Tuesday this coming week.  I'm thinking along the lines of an archery tournament as the setting, though I've still to come up with specifics for the scenario.

The models I've used for these bands are a real mixture.  Most are old Games Workshop figures that I've had for quite a while - at least they'll get an airing this way.  Some are recently-painted models from Black Tree Design.  A few are from other places, such as Mega Miniatures and others that I cannot remember any more.

So, what do these entourages look like?  Read on and you'll find out... 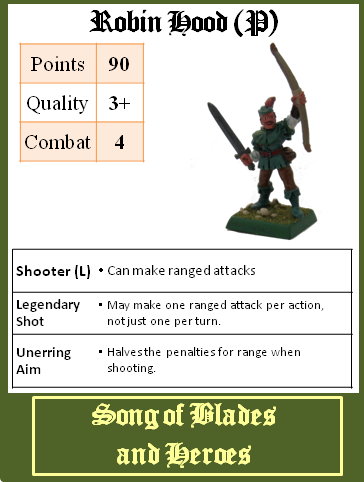 First, the hero of the band.  Robin is loaded up with pretty much all the archery skills I can find.  At 90 points he's quite expensive, so I was somewhat restrained in allocating his combat and quality scores.  I could have given him Leader (and many other skills as well!), but this would have made him fantastically expensive.  Besides, in most films or TV shows he's all action, rather than directing his followers. 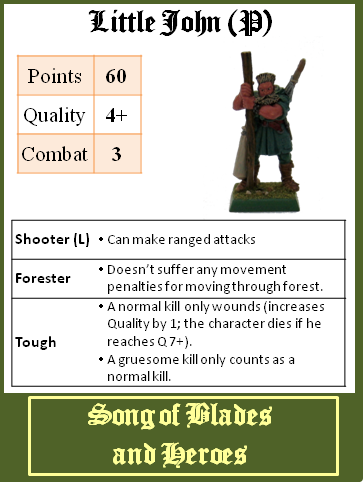 I had the same problem with Little John - how to make him characterful, but not too much of a one man army.  In this case, Tough seems to suit the big man quite well; he'll be very hard to take down.  Perhaps he should be Combat 4 instead of 3? 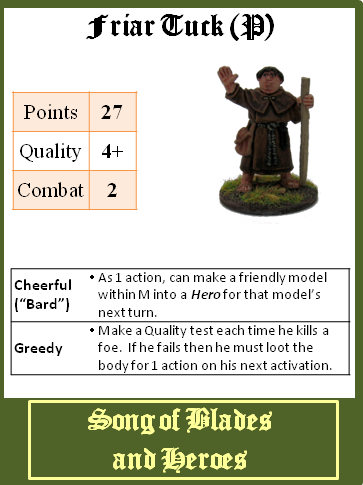 When designing the card for Friar Tuck, I had great difficulty in deciding which skill(s) would suit.  He's not really a fighter, though he has been known to bash the occasional head with his staff.  The Cleric ability from Song of Blades and Heroes is really designed for the traditional Dungeons and Dragons character, with extra bonuses against undead models and some ability to cure poison.  This isn't much use for Friar Tuck.

In the end, I decided that he's really good for morale and can inspire others, so I gave him the Bard ability from Song of Arthur and Merlin.  I've renamed this skill to Cheerful, but it's just the same otherwise. 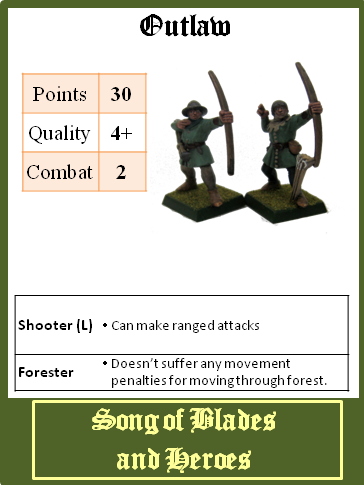 The grunts of this warband are, of course, the outlaws.  For minions they are expensive at 30 points each, but they should be pretty good in a forest.  Not so much away from the trees, though... 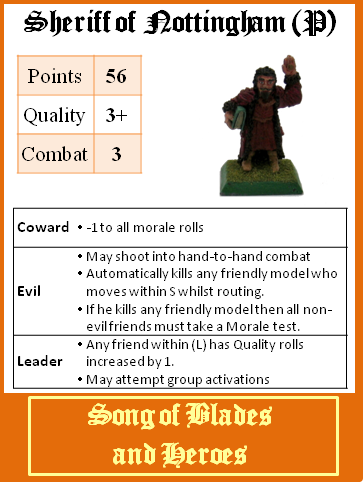 The Sheriff of Nottingham is a nasty man, but he's not really a fighter.  I've given him Leader skill; this makes him quite useful (just not on the front line!). 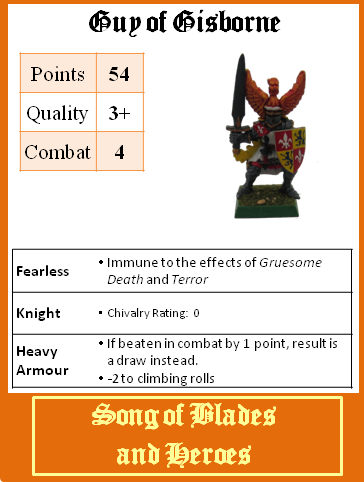 I see Guy of Gisborne as a loyal follower of the Sheriff's.  Possibly he doesn't question his boss's excesses, or maybe he doesn't care.  Either way, he's a tough fighter! 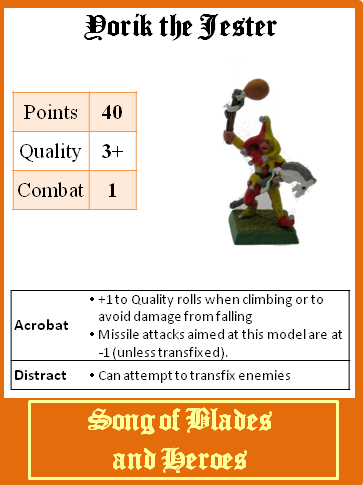 Yorik the Jester is my own invention, just to give the Sheriff's band someone who isn't just a straight fighter.  Yorik is quite capable of bamboozling most of the Merry Men with his trickery. 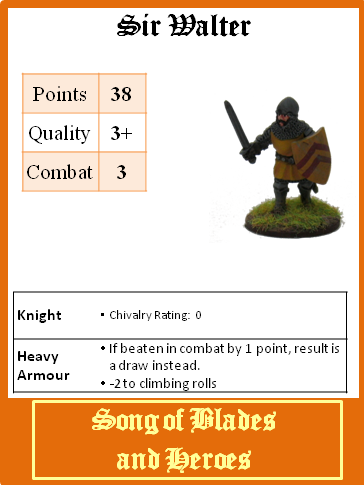 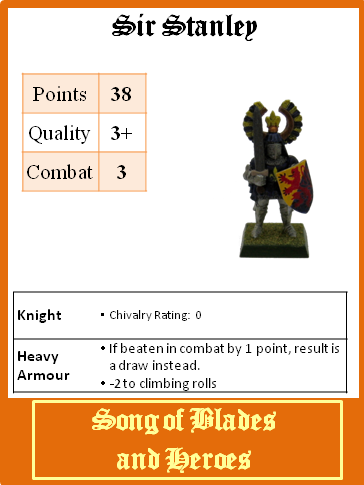 As well as Guy, the Sheriff can call upon several lesser knights.  These fighters are relatively inexpensive, yet potent enough to make the outlaws treat them with respect. 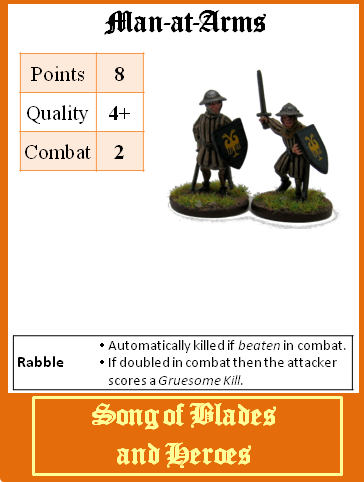 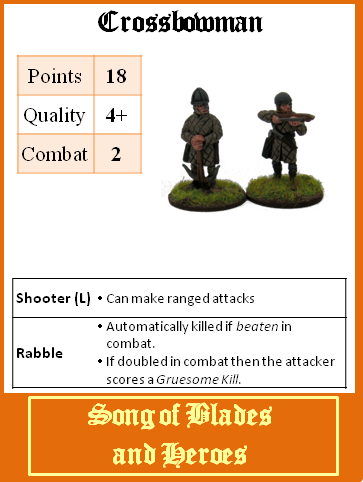 Finally, the Sheriff's footsoldiers are plentiful and cheap.  It should be straightforward for them to outnumber the outlaw band by 2:1 or 3:1 - it'll be interesting to see whether they can swarm the Merry Men before the latter realise just how poor they are.  They die very easily, just as in all the best Robin Hood films!


I haven't done a card for Maid Marion yet, though I have it in mind to use the Inconvenient trait (again, from Song of Arthur and Merlin) for her.  Depending on the scenario, she might be part of the Merry Men or of  the Sheriff's forces.

[Edit: a first battle report using these bands can be found here]
Posted by Colgar6 at 20:24

Email ThisBlogThis!Share to TwitterShare to FacebookShare to Pinterest
Labels: Robin Hood, Song of Blades and Heroes