Anyone who has followed my work for some time will know that I like to do a little bit of converting on some of my models.  This is especially so for plastic models such as Wargames Factory's Zombie Vixens, where the kit comes with 3 identical sprues. To some extent, the 3 copies of each body can be made unique by using different heads and arms on each, but even with this some of the poses are more "recognisable" than others.

To my mind, one of the models from the Zombie Vixens that is most in need of some "unique" treatment is the "lifeguard".  The body for this figure is stretching out with one arm whilst the other arm trails behind.  One leg is straight and extended, but the other is bent upwards. 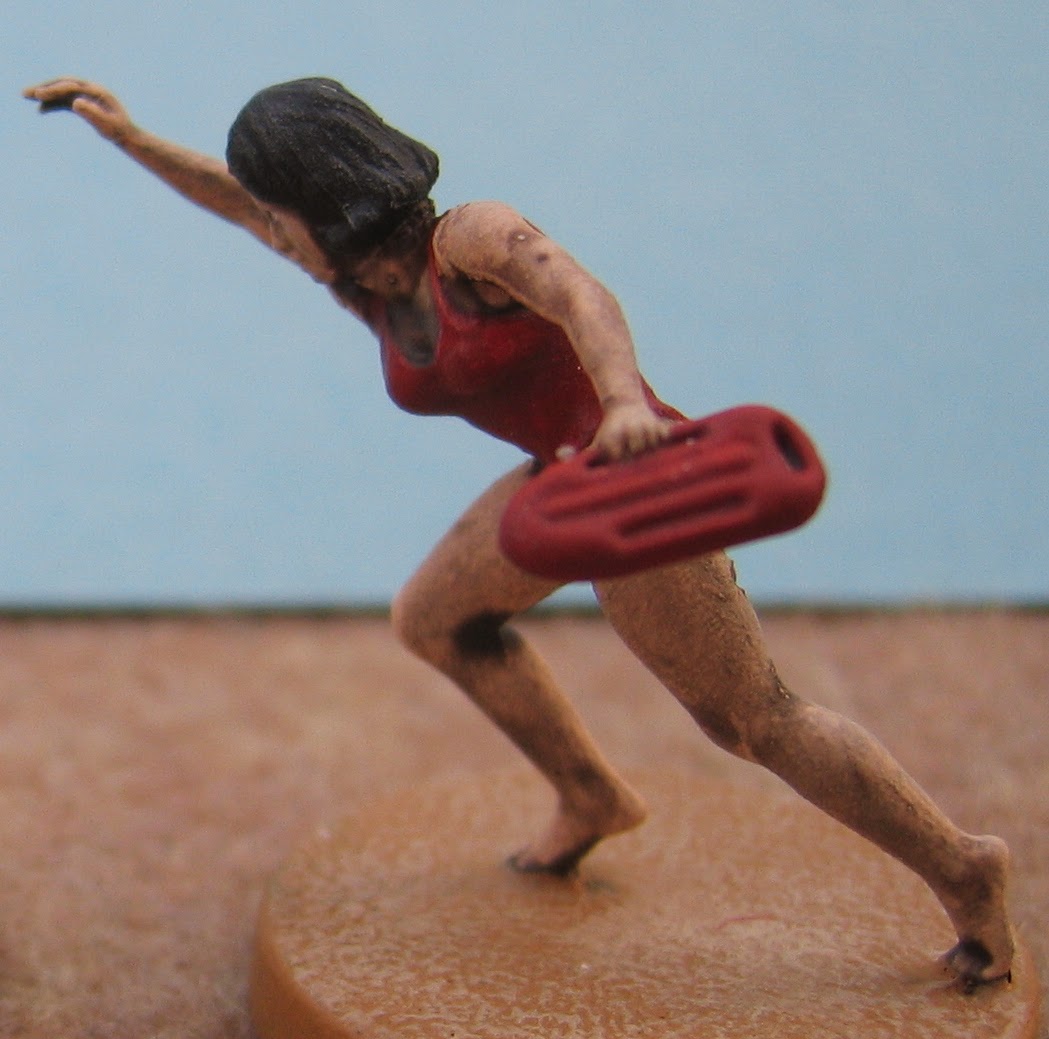 Last year, I used the "lifeguard" body from my first sprue of Vixens to make - well, a lifeguard.  This was all done some time ago (see here) and I've been pondering what to do with the other copies of this model ever since.  Then it struck me...

It occurred to me that it wouldn't take much effort to turn this model into a zombie ballerina, doing a pirouette.  Why would I want to do that, I can hear you asking?  Well, because I can?  As a test of my model-making skills?  Because my zombie collection is an equal opportunity horde which represents many different facets of society?  I did it for all of the above reasons, and probably more.

So, how did I go about making this conversion.  Firstly, I decided that the bent leg would need some repositioning.  I cut it at the hip, knee and ankle joints, though only the hip was cut all the way through.  The other joints only needed a little repositioning.

The leg was then glued back in the new location and the cuts were filled with Milliput.  That was the biggest part of the conversion and although I spent quite a lot of effort on filling and smoothing off the joints, I could have done a lot less.  After all, the skirt will hide much of the hip and knee anyway.

I found a zombie head with a ponytail, though that wasn't quite the look I wanted.  Instead, I cut off the ponytail and made a bun from a small blob of green stuff instead.  I suppose that I could have left the ponytail on the model; as long as the hair is pulled back then it's good either way (ballerinas tend to have their hair well under control, I believe).

Once arms and head were fitted, I based the model.  Note that I added a short length of wire to help strengthen the joint between figure and base; it seemed like an obvious weak point to me.

I've added a skirt made from tissue paper.  This was cut into a circle about the size of a 1 pence coin (OK, 20mm for those of you outside the UK), with a 5mm circular hole in the middle.  The skirt was slit, coated in tacky glue and then wrapped around the ballerina's waist.  It does have about 4 thin layers, though I'm not sure how much of this will be visible when the model is completed.

So far, so good.  If you're interested enough to see how she is painted then you'll need to wait for my next post.  That's because I haven't actually painted this model yet!  Still, it's Zomtober again and she will appear in my first week's offerings on Sunday next!