It's been a long while since I played a game of All Things Zombie and I really miss it!  The reason for this delay is that the last game which involved the B-Team (here) required a hospital for the follow-up scenario.  Although I have started to build such a piece of terrain (here), it's a long way from being complete and I cannot continue the story without it.  I had resigned myself to a gap of many months before I carried on with the B-Team.

A couple of days ago, my eldest son asked if we could play ATZ during this holiday season.  I carefully explained that I wasn't ready to continue the main plot arc of my campaign.  In return, he pointed out just as carefully that we could use some other characters, either as a sub-plot for the main story or as a one-off game.  So why didn't I think of this rather obvious possibility?  D'oh! 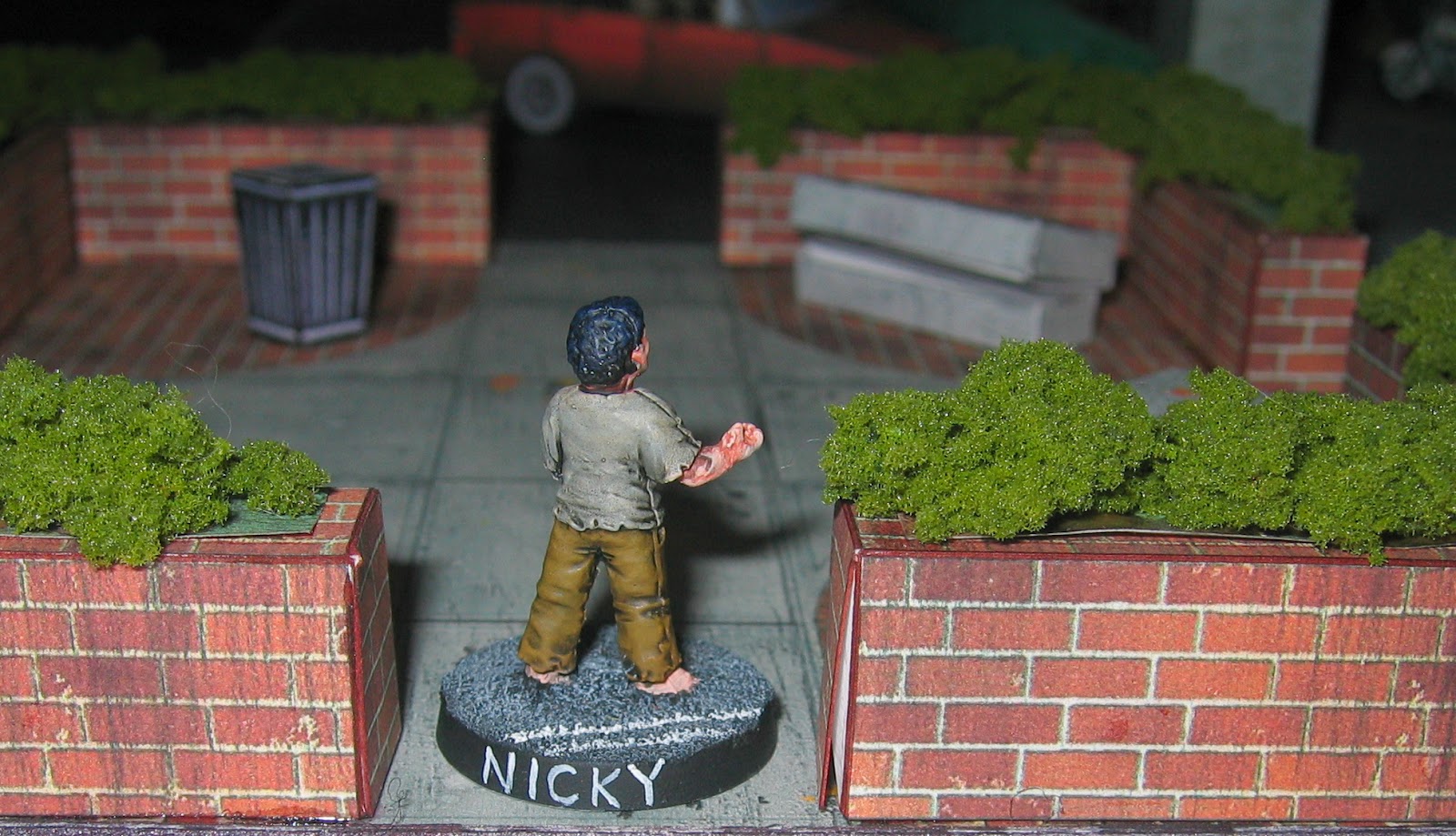 Those of you with very good memories for detail may remember that a small time crook called Nicky appeared briefly in one of my earlier B-team adventures.  He was locked up in a cell in a police station that was in danger of being overrun by zombies (here).  The B-team managed to release him from captivity before the zombies entered, but Nicky repaid this favour by fleeing into the darkness without making any attempt to help the other humans.

This game follows the little crook and shows what happened to him after his escape. 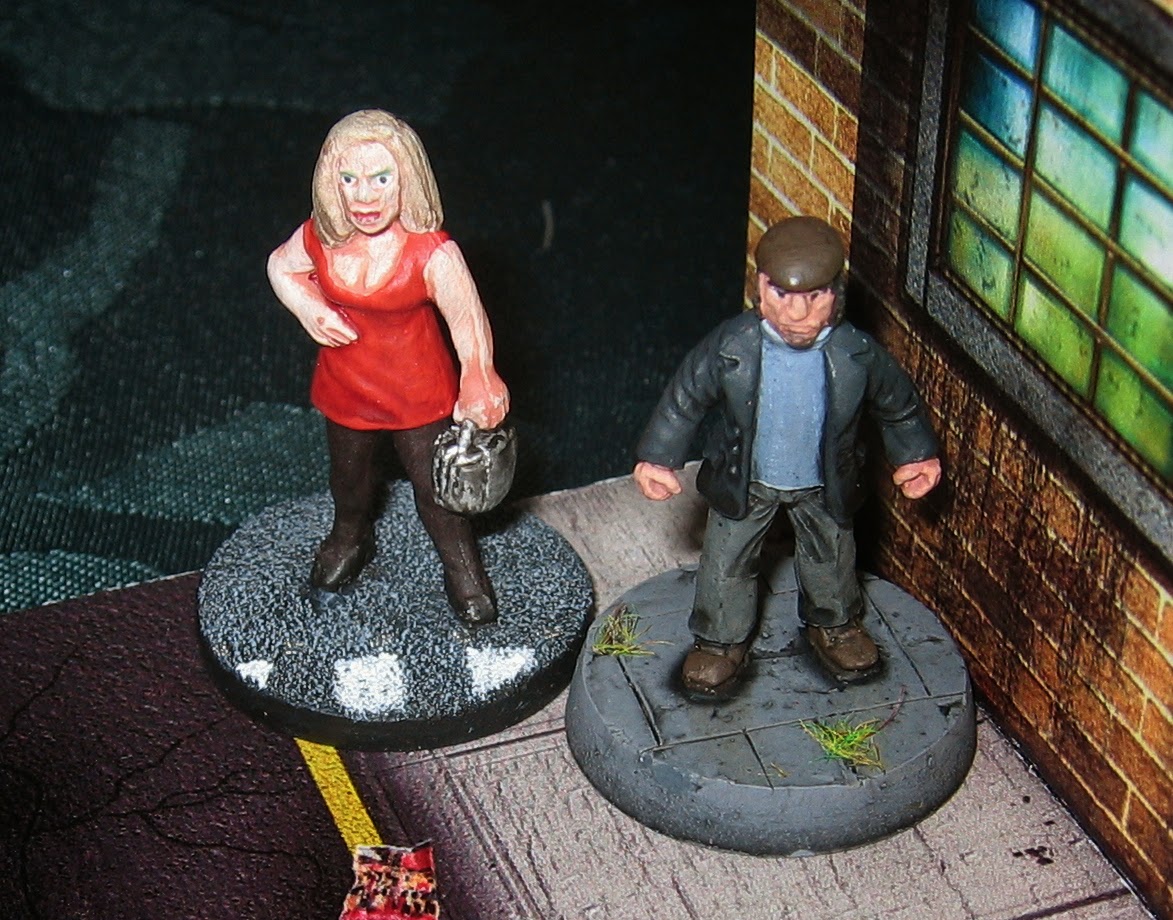 Since we had 2 players (both of my sons), I needed to introduce another character as well.  Here is Vince, along with a bonus sidekick, Tracy.  They're acquaintances of Nicky, but they don't know he's in the area or that he has escaped from jail. 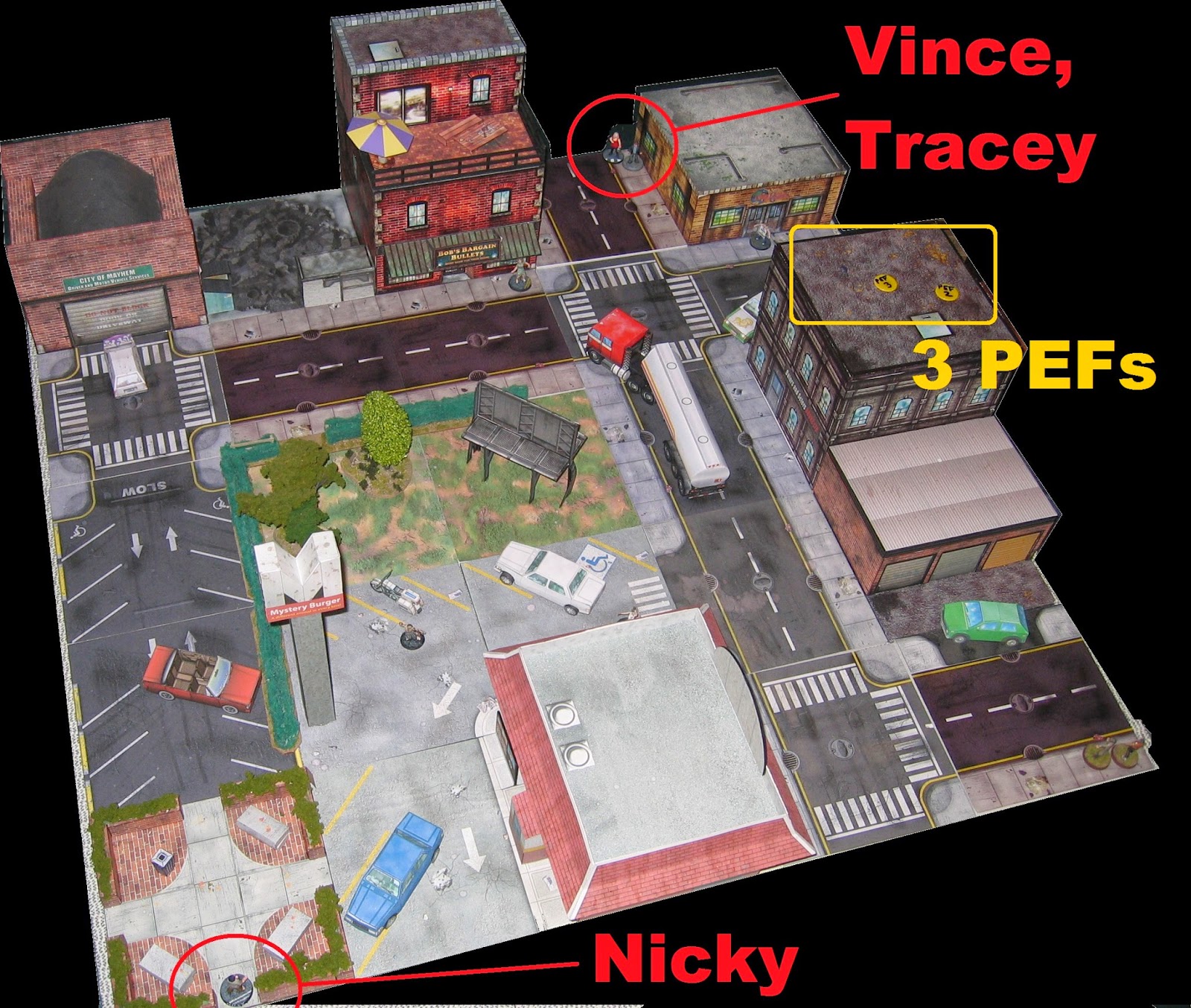 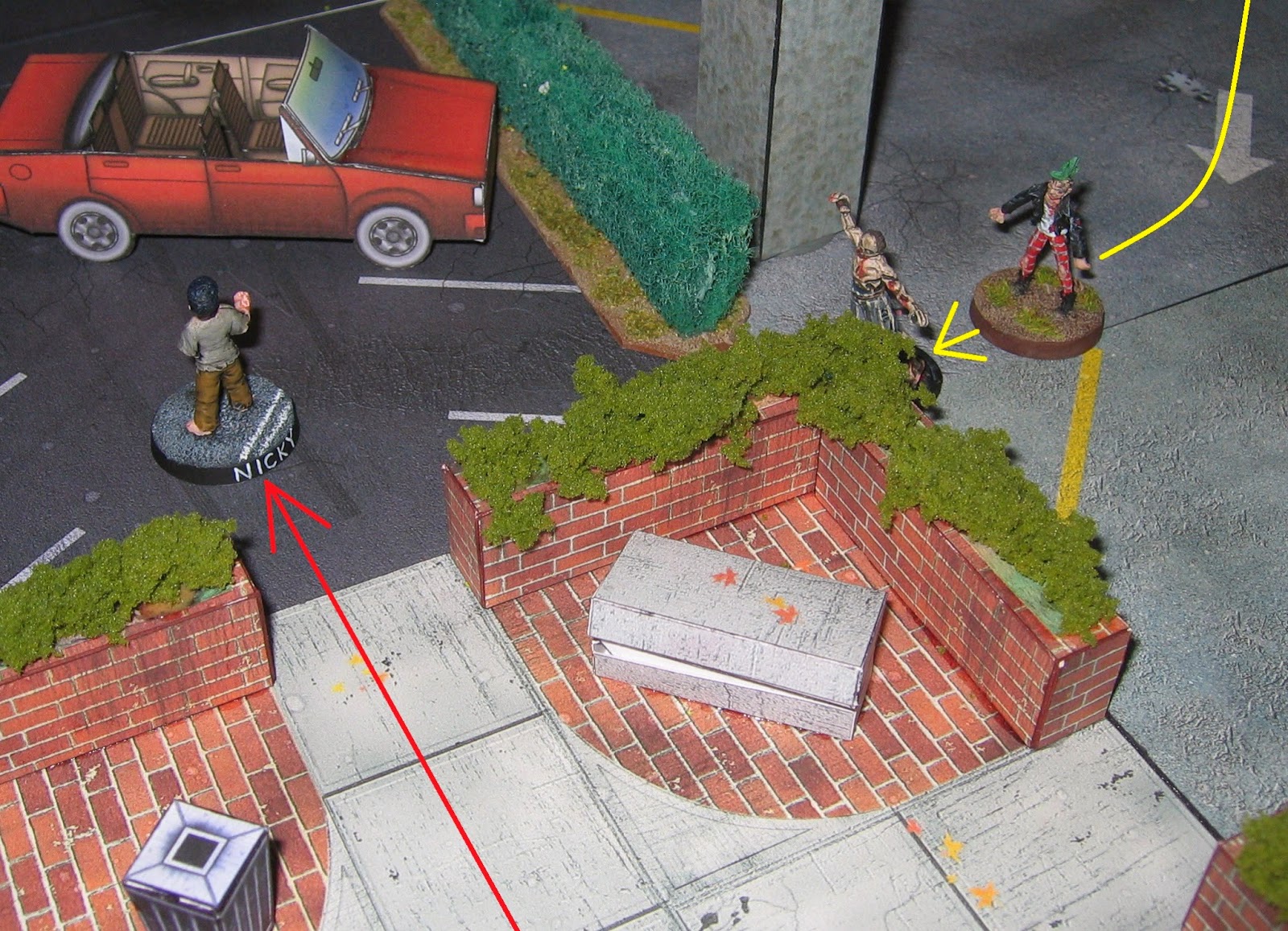 Nicky strolled forwards, intent on investigating the interesting-looking convertible that appeared to have been abandoned in the car park.  However, he was soon spotted by a couple of zombies; they started to move towards him. 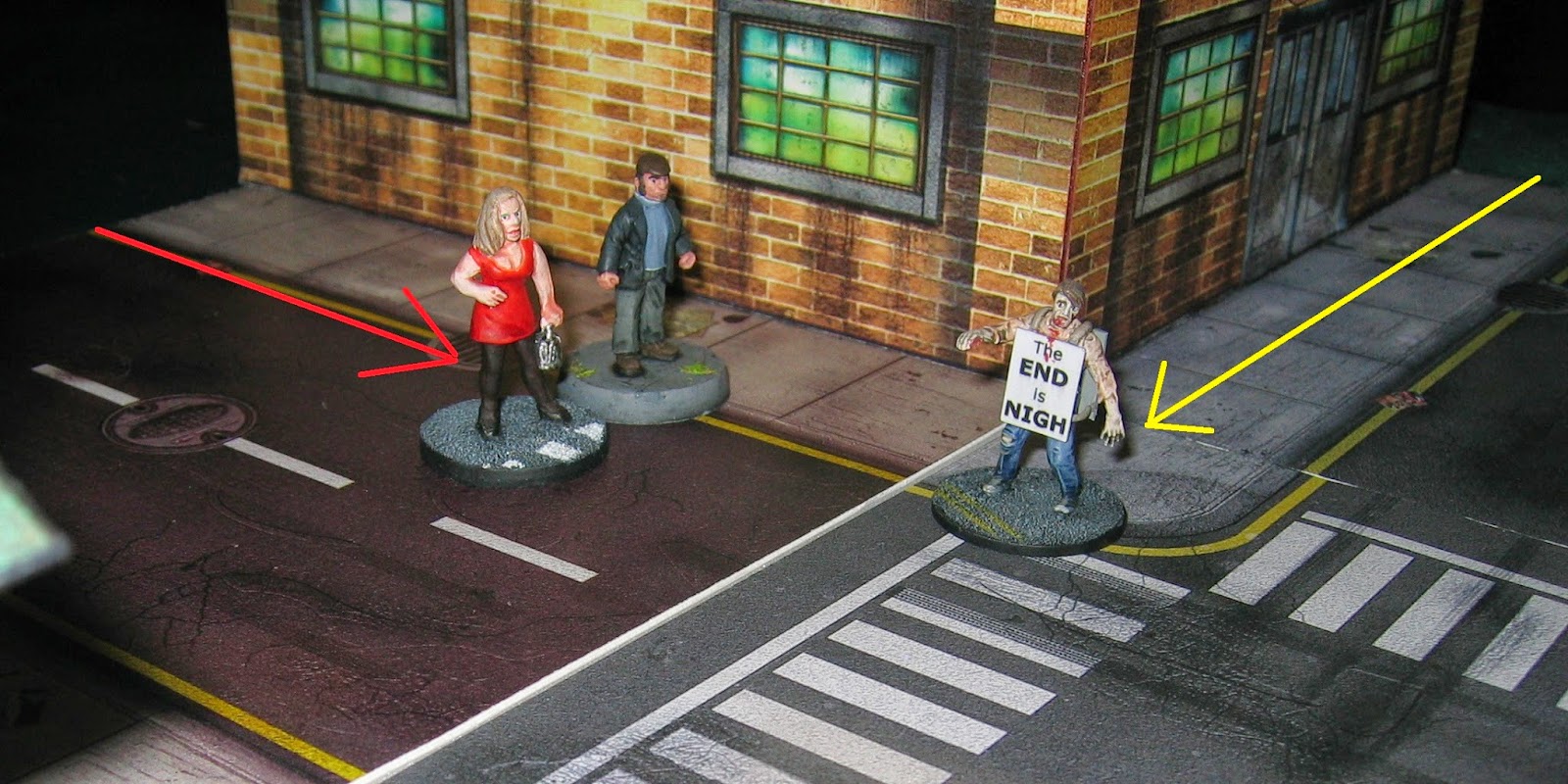 On the other side of town, Vince and Tracy crept forward very slowly.  They were dismayed when a zombie walked round the corner, right in front of them. 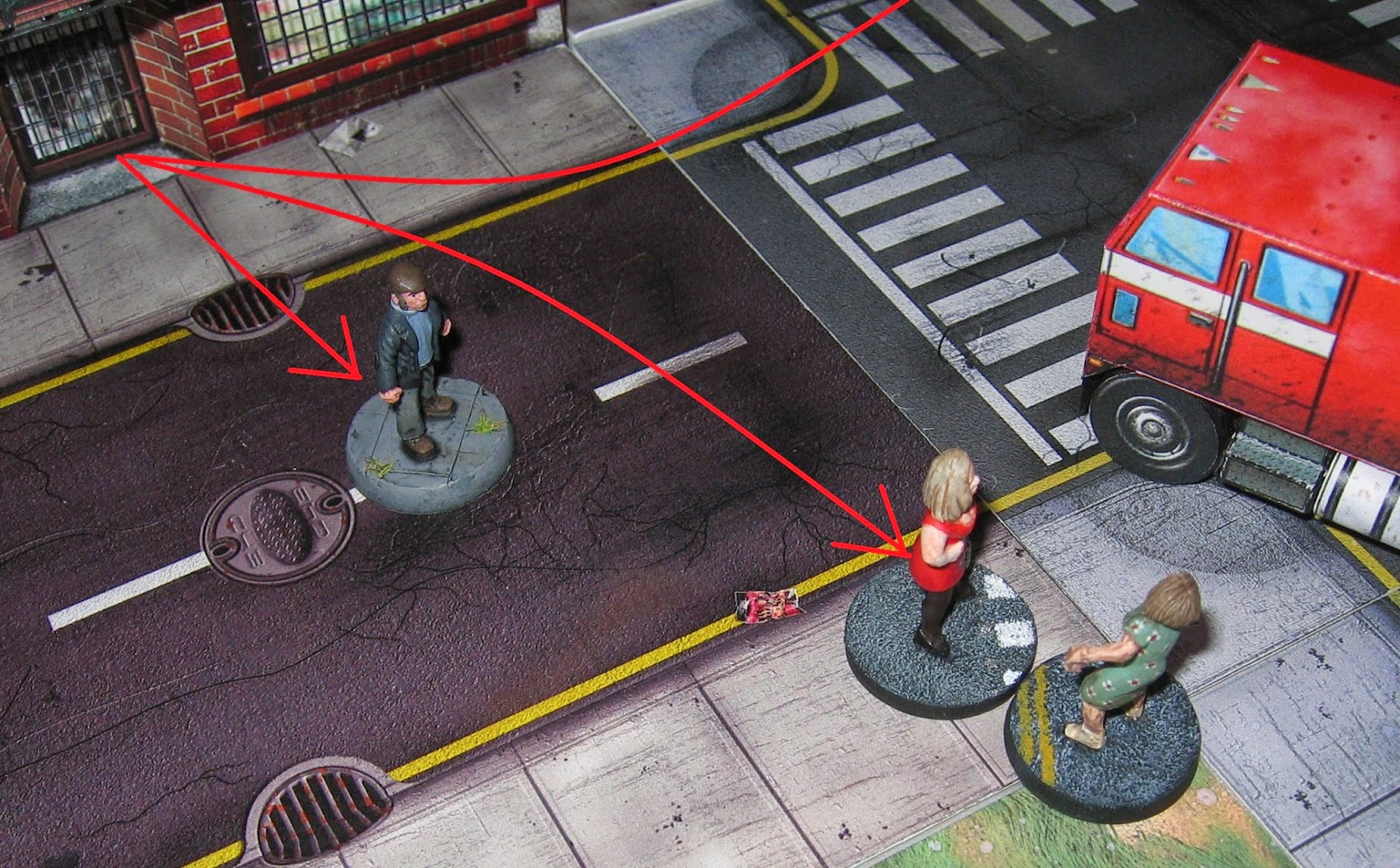 The couple fled along the street and tried to seek shelter in a nearby gun shop.  However, the door was locked and they had no way of breaking in to the well-protected building.  On turning round, Tracy saw another zombie blocking their path.  With a scream of rage, she flung herself at the creature, intending to take out all of her frustrations on the decaying, reanimated corpse! 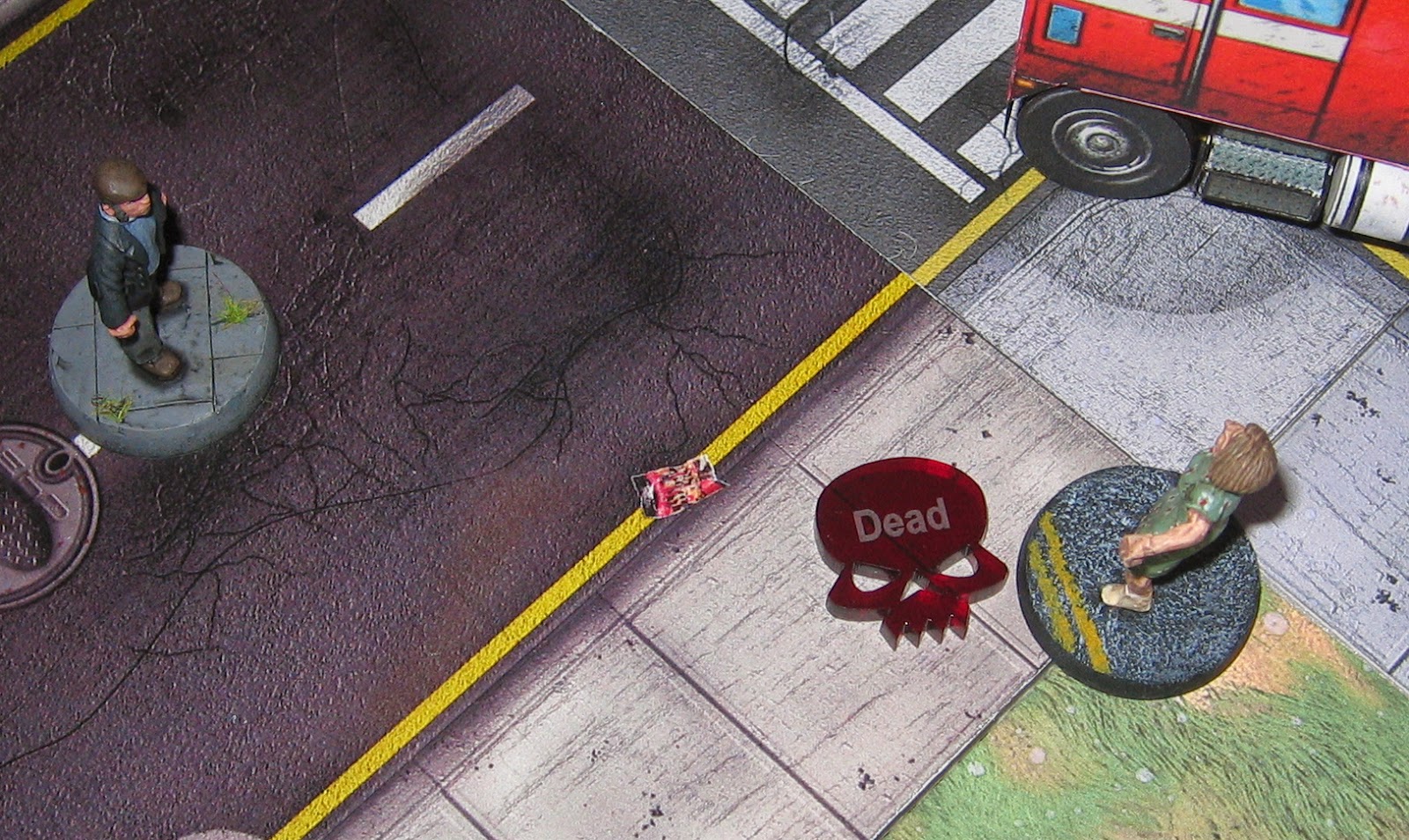 Sadly for Tracy, rage (and a handbag) proved to be insufficient to defeat the zombie.  Instead, the undead housewife bit deep into her attacker's arm before tearing chunks out of the now-dying woman's face.

"Stupid cow!" Vince muttered, before he turned and jogged on the other way. 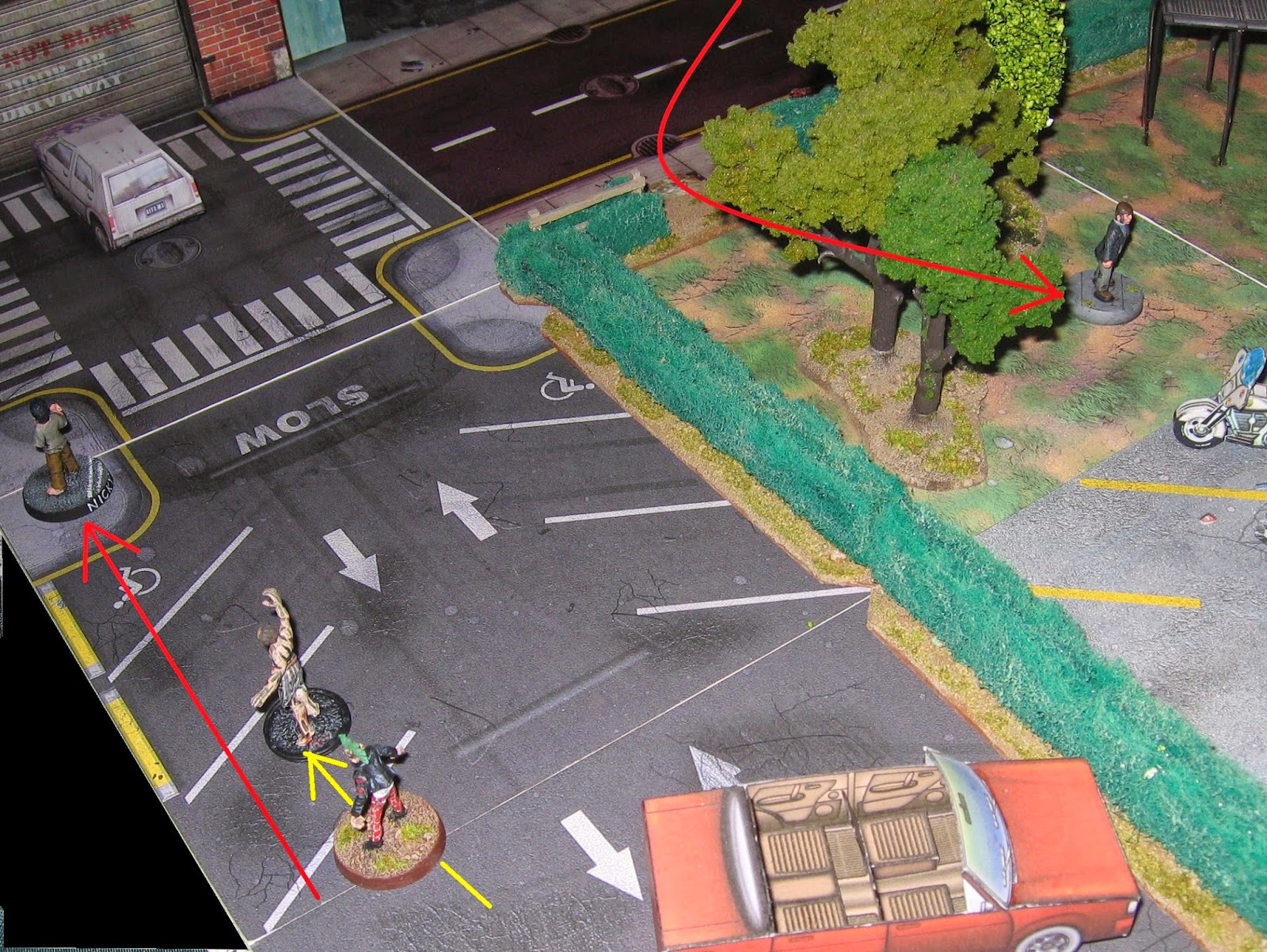 As Nicky trotted along, keeping just ahead of the trailing zombies, he thought he saw a familiar figure running in the other direction. 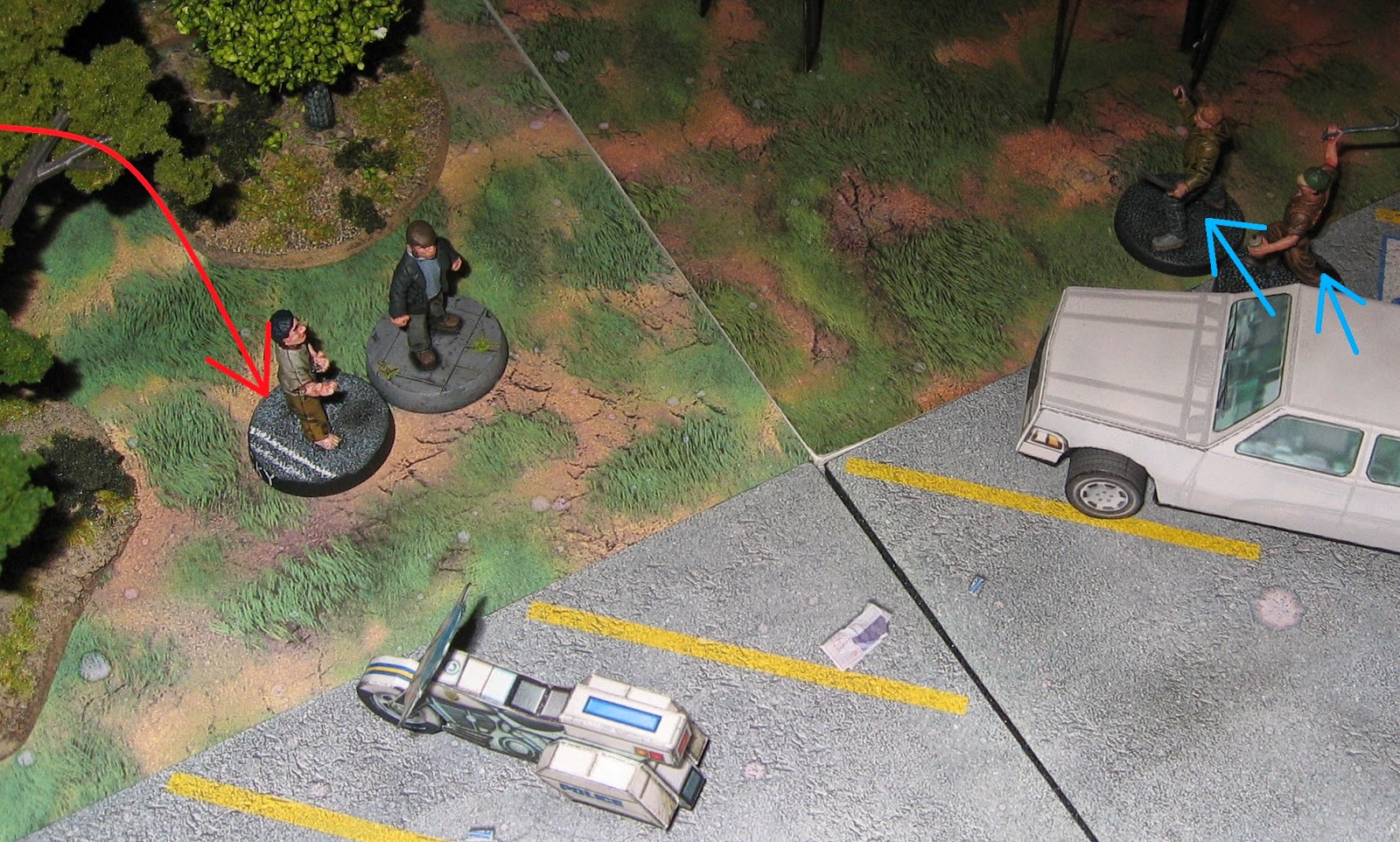 He swerved into the park and finally caught up with Vince, just as the other paused for breath.  "Hey, Vince!  I thought it was you" said Nicky.  The, seeing the look on his friend's face, he subsided.  "Tough day, eh?" he muttered to himself.

Just then, 2 men got out of a nearby parked car (PEF 1 had already resolved as "there's something out there - increase the encounter level by 1.  PEF 2 now moved straight for the players and ended up over the car, where it resolved as a random "contact!").

Mark and Ted were workmates who had become lost and were hiding out in the hope that they could make a break for it when the zombies left the area.  When they saw other humans, they decided that making contact with them might be a better plan.  However, as they scanned the newcomers, they concluded that Nicky and Vince weren't very likely to assist them.  In turn, the unarmed gangers looked at Mark's pistol with covetous eyes, but decided with trepidation that their odds of acquiring it were poor (in other words, the talk the talk rolls were tied, so both sides would go about their business separately). 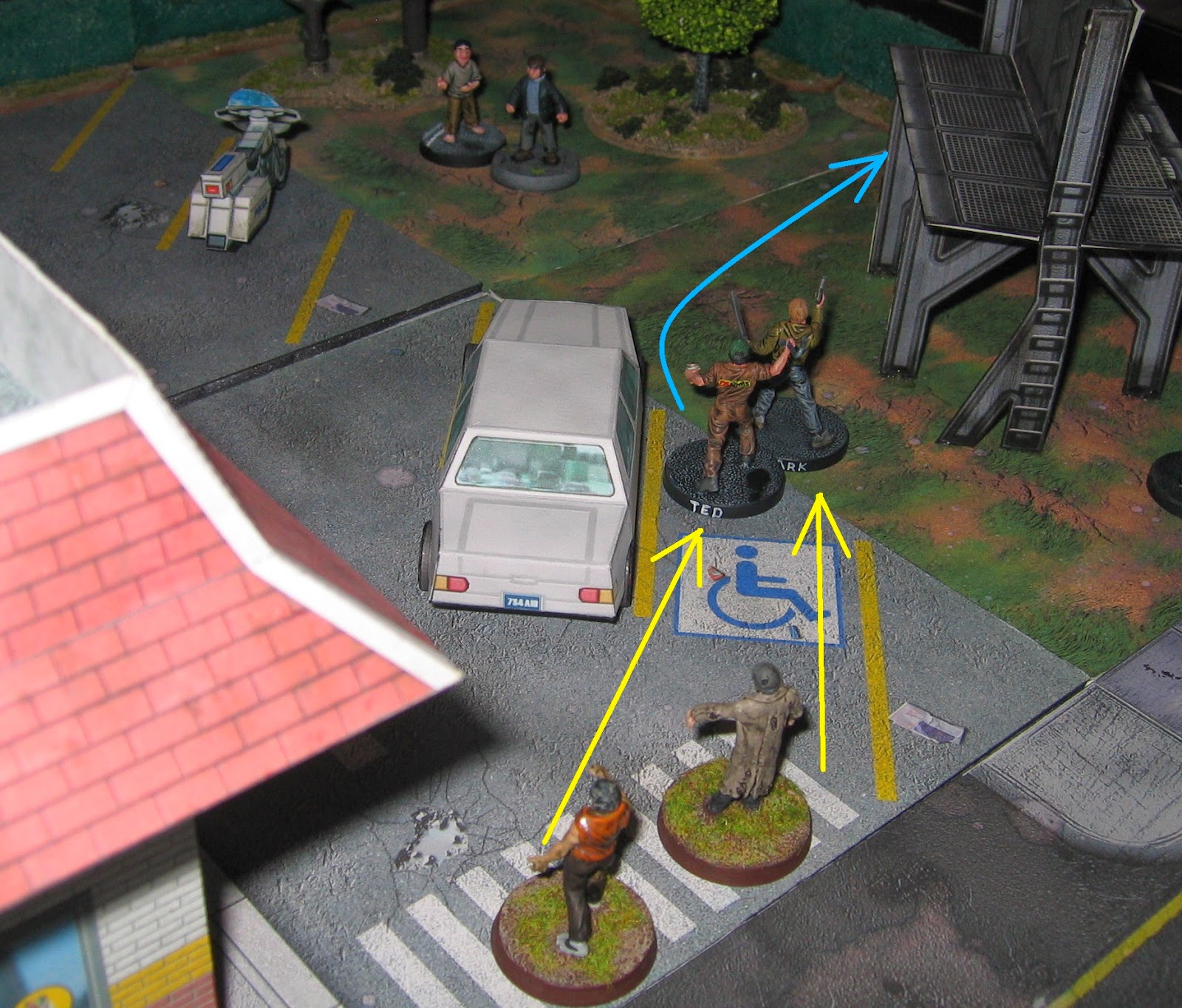 In any case, fate intervened before either group could act.  A pair of zombies charged at the civilians from behind.  Ted heard something and didn't wait to find out what was behind him.  He fled and ducked behind the nearby hoarding.  Finding himself alone, Mark fought with the desperation of a trapped man; he managed to knock both zombies to the ground, hard. 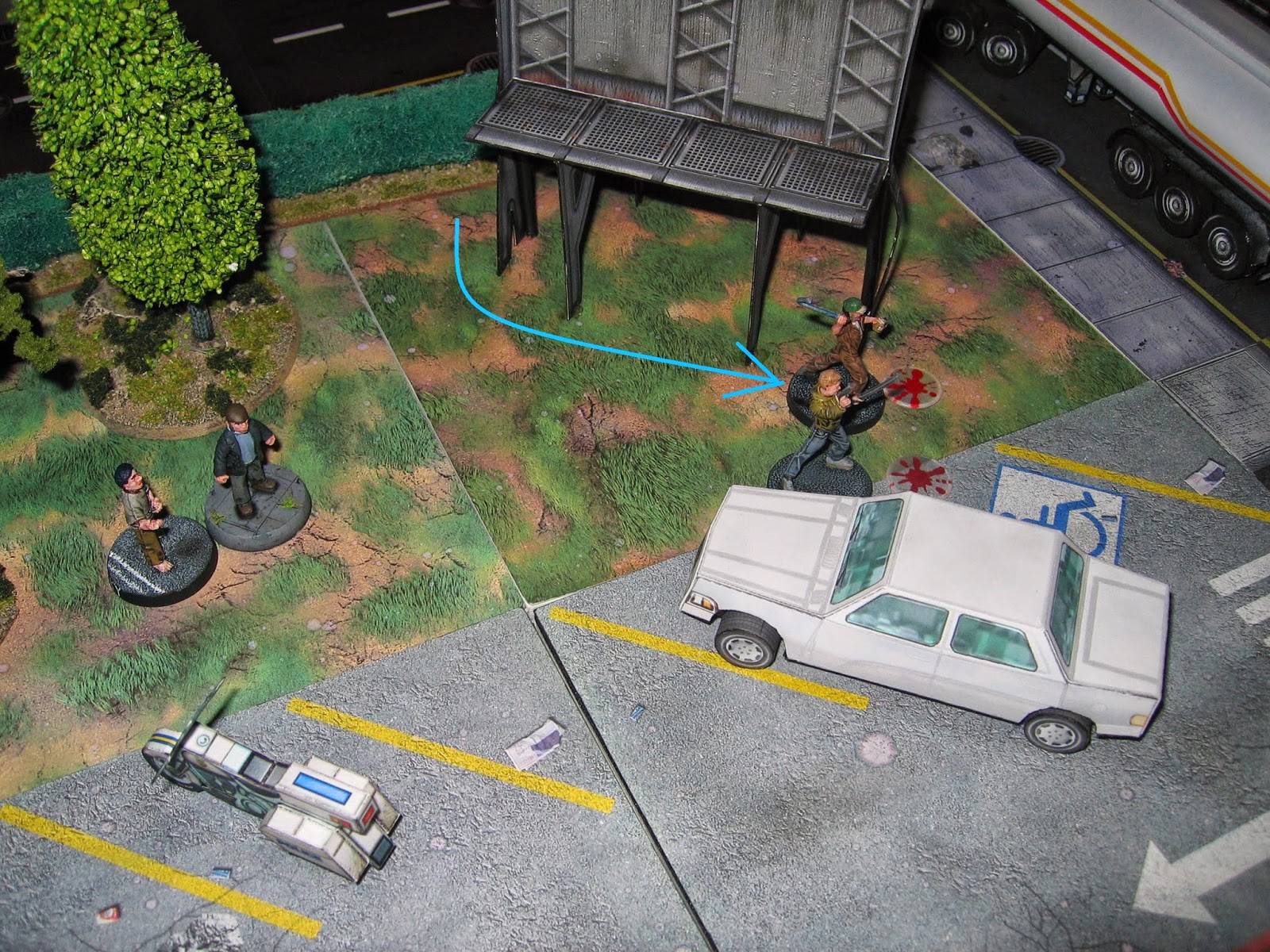 As the 2 zombies lay winded on the ground, Mark used his machete to decapitate one of them.  Ted recovered his nerve and ran back up to his friend's side.  With a muffled apology to Mark for leaving him in the lurch, Ted jabbed his tyre iron into the second zombie's eye socket and silenced it forever. 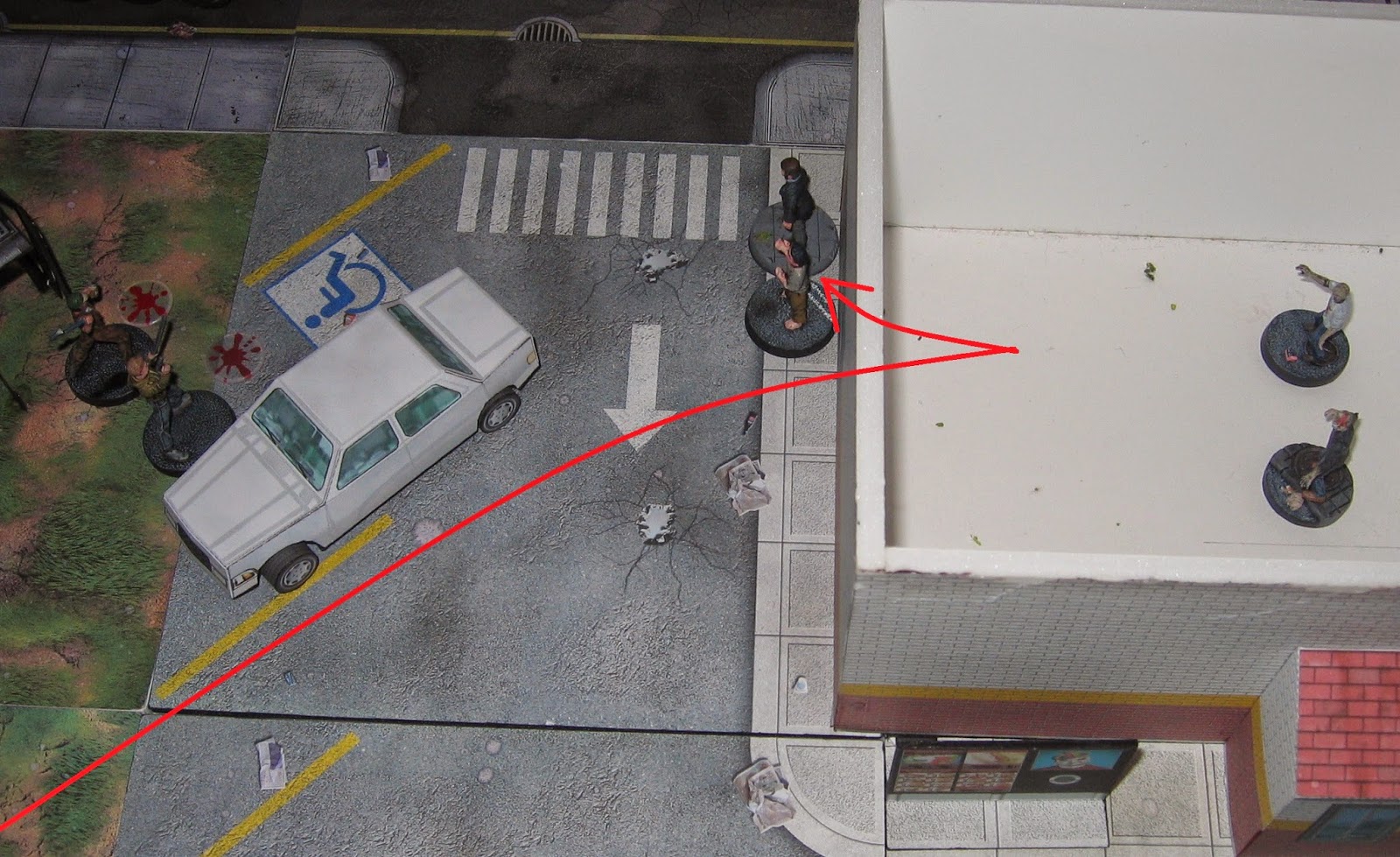 The pair of civilians were catching their breath, so the crooks ran past them.  "Hungry?" asked Vince.  "You bet!" answered Nicky.  The pair of them entered a nearby burger bar, but backed out quickly on seeing yet more zombies.  "Bugger this!" exclaimed Vince.  "Let's find a car and get out of here!". 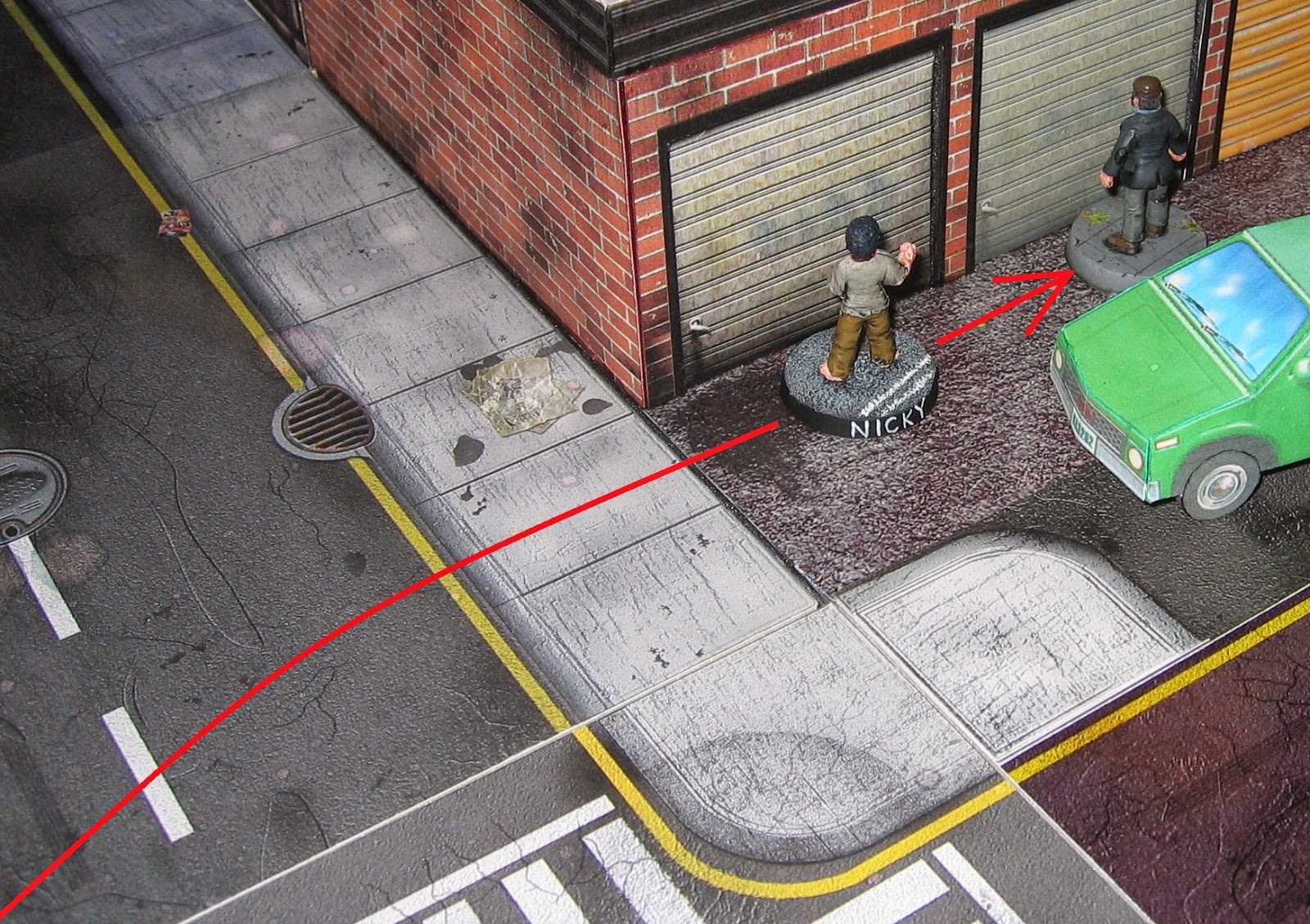 The pair ran across the street and started trying the doors on the block of lockups.  "This'll be where they keep the good stuff" muttered Vince, though in reality there was probably no better loot in the units than anywhere else.  Unfortunately for the crooks, all of the garages were locked; without tools they couldn't force them open. 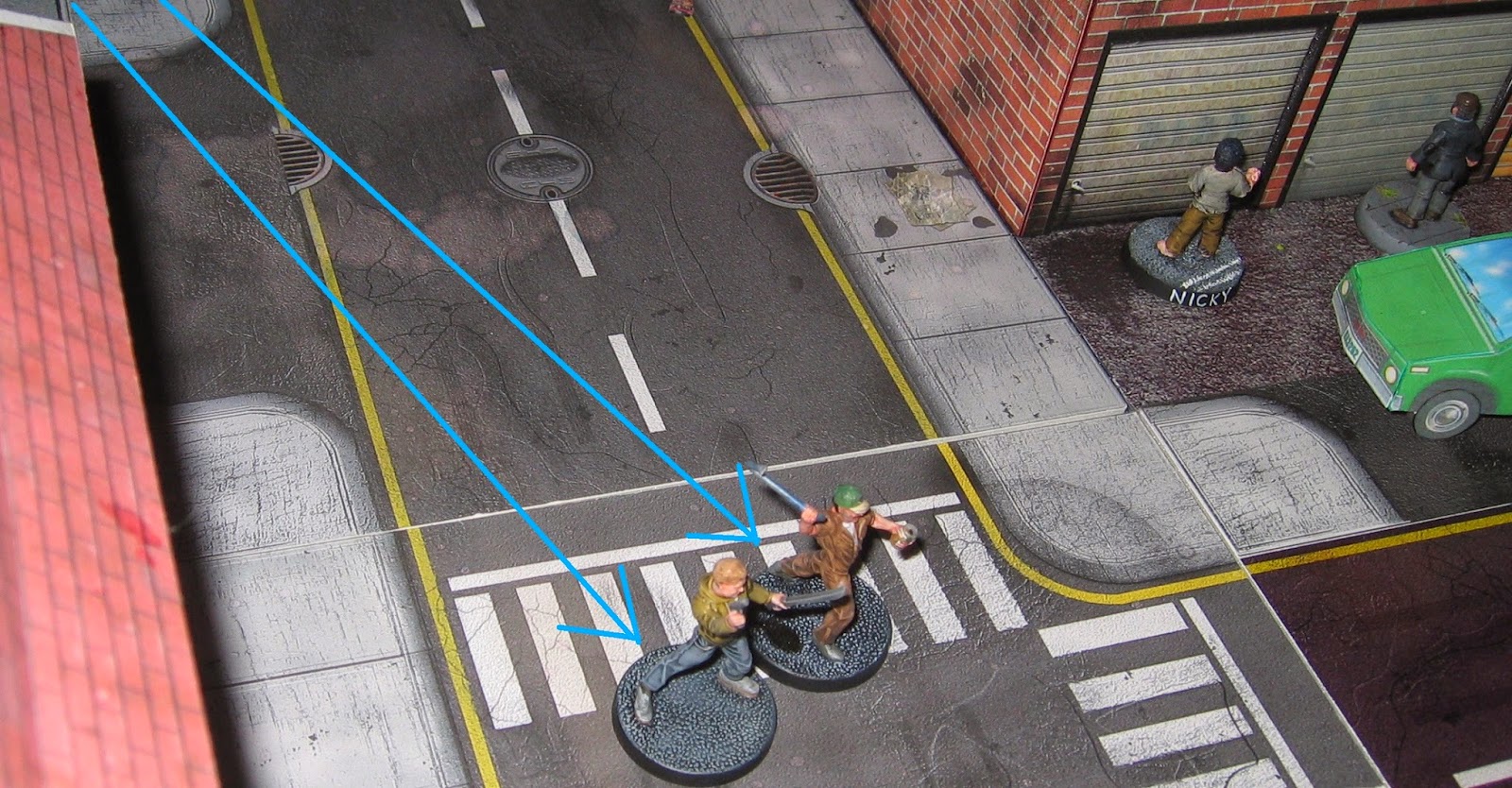 Nicky and Vince were so preoccupied with their attempts to break in that they failed to notice Ted and Mark running down the road, even though they looked terrified and were calling out a warning of "Zombies!!". 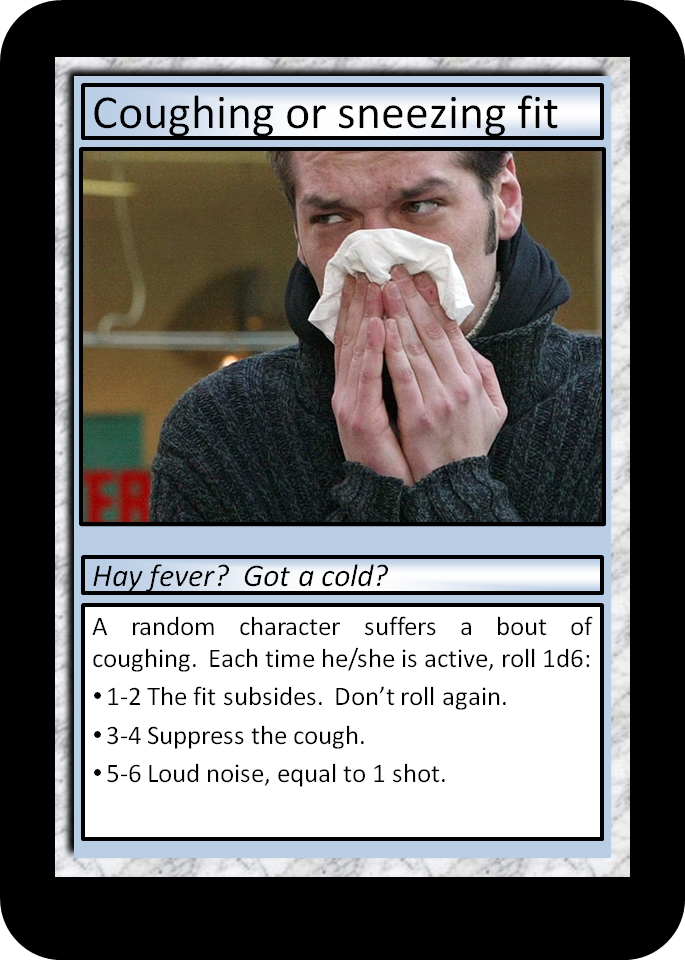 As they ran, Ted felt a sneeze coming on.  "I think I'm allergic to the undead!" he wailed.  However, before he exploded into his handkerchief, both he and Mark ran off the board (much to the disgust of the players.  Random events had been very sparse during this game and the sneezing fit had considerable potential to entertain, if the character had only stayed around!).

The thieves gave up on the garages and turned their attention to the small, green hatchback that was parked in front of them.  Nicky smashed a window to gain entry and started rooting around inside the vehicle.  Straight away, he found a spare can of fuel, so he kept searching (that greedy attribute can be bad news somethimes: Nicky was completely occupied with looting for 2 turns).

Vince turned his attention to hot-wiring the car.  With the practised efficiency of a pro, he had the motor running within just a few seconds, though he also was oblivious to the approaching zeds. 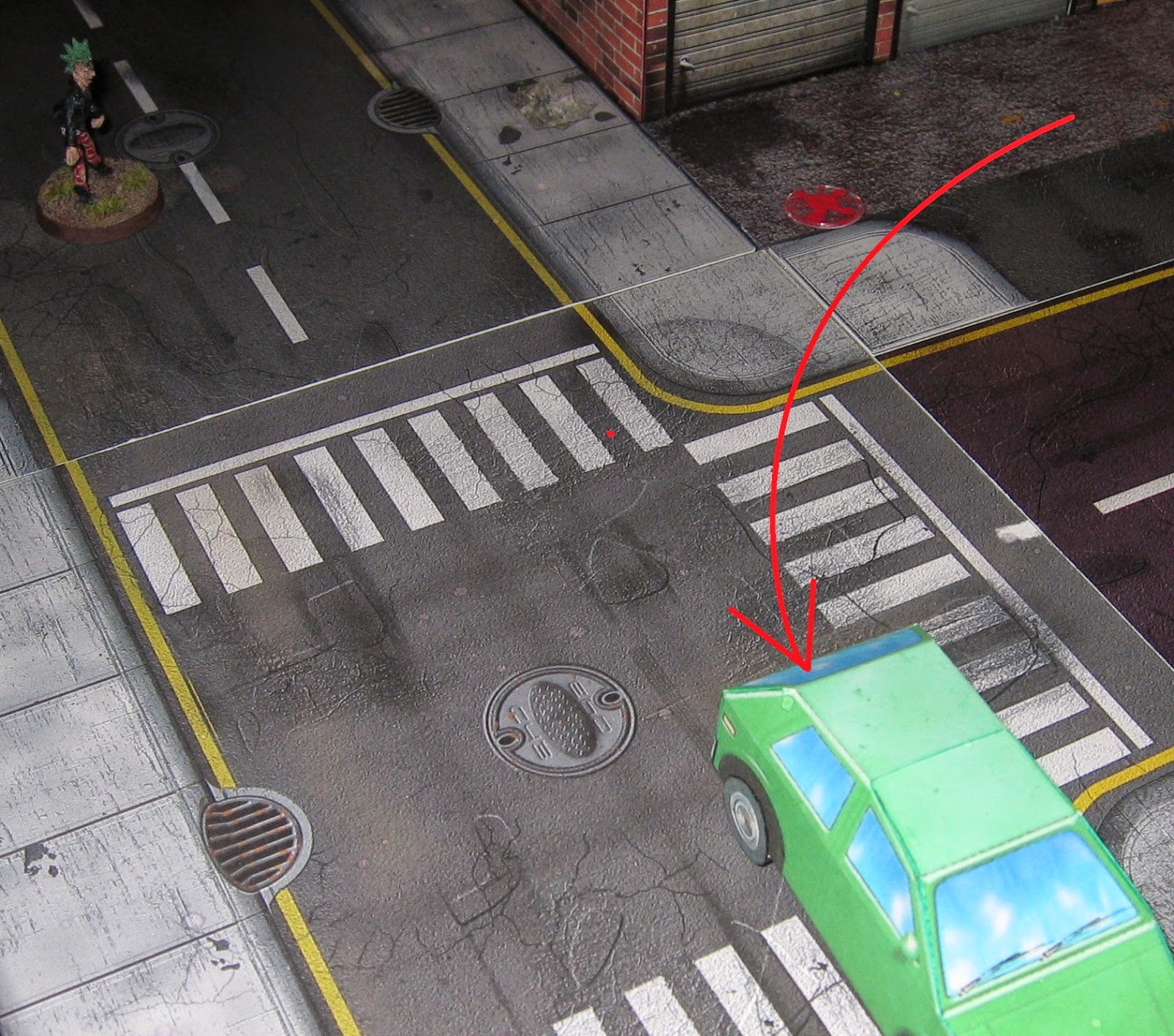 "Just like normal" though Vince, as he swung the wheel and accelerated.  "Gone in 20 seconds!"  There was a slight bump as he left the sidewalk.  "What was that?" he wondered, but he didn't even bother to look in the rear view mirror as they drove away and off the board.

For a small game, there seemed to be a lot going on.  The players never really got much of a chance to steal and loot; there were always at least a few zombies around and they didn't want to take their chances in melee with these creatures.  At least Lestrade didn't appear; the thieves probably would have been in even more trouble if they'd had to deal with him!  Finally, when all's said and done, they did manage to acquire a small car with a broken window and extra fuel...

So, Nicky is not eligible for REP advancement because he didn't kill any zombies, though he did fulfil all the other victory conditions.

Vince technically lost the scenario because a member of his party was killed (since he has the born leader trait, I think that this is a significant demerit to him).  He did steal stuff (the car) and did kill a zombie, even if he wasn't aware that he'd run it down.  We rolled to see if Vince would lose REP, but didn't get the requisite '6'.  I guess that he wasn't really that bothered about Tracy and wouldn't be losing any sleep over her demise...