Last week, I showed how I had converted my harpy models.  I promised then that I would show the painted versions soon.  Well, this is sooner than I expected, but I've got nothing else for today's article so here they are!

As I hinted in part 1, I've decided to paint these creatures with a purple skin tone.  I wasn't sure about this, though I had decided that I didn't particularly want any normal human colouring.  After all, these are supposed to be monsters!

Some research on the internet suggested that the most popular visualisations of harpies were a Caucasian ("white") flesh, followed by a variety of greens, slate blues and purples.  My elder son suggested that I colour them something like pigeons, with grey bodies and iridescent green hair.  It's an interesting idea, but I couldn't quite bring myself to try it.

Careful observers of these pictures will notice that there are several different forms of harpy in this flock.  Some have human legs, but most have bird-like legs.  A few harpies have their wings and arms fused together, with claws instead of hands, but the remainder have separate limbs.

I suppose one could argue that these physical traits corresponded to the level of curse placed on the different individuals by the gods, or perhaps to their degree of depravity and consequent physical degeneration.  I don't feel any need to come up with any particular explanation for the various forms; they add some variety and that's good enough for me! 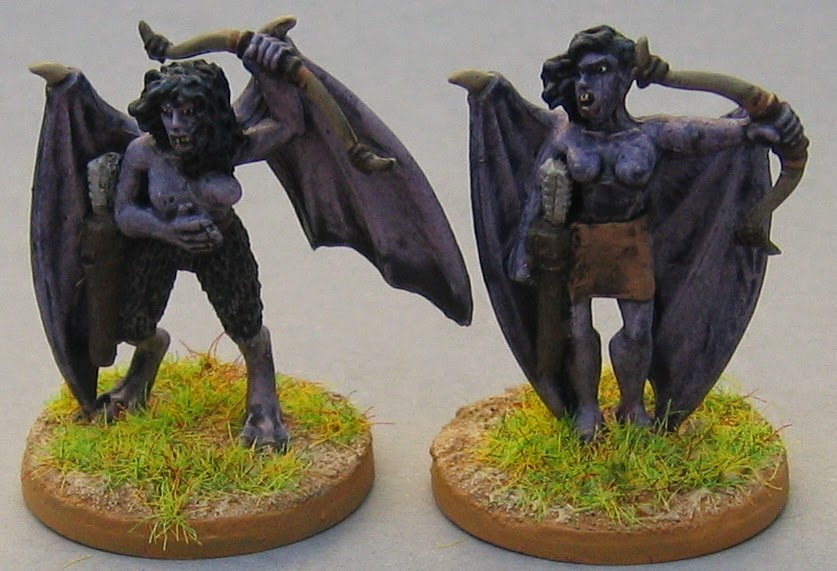 I'm quite pleased with the way that these 2 more complex conversions came out.  You really cannot tell where are the joints between plastic and metal, especially on the arms.  Unless you look back at last week's unpainted figures, of course - but that would be cheating!

I would have liked to model some of the harpies in flight.  I'm slightly disappointed that none of the poses really lent themselves to this, though the one with outstretched wings might have worked.  Perhaps I'll get some more of these models some day and see if I can manage such a conversion?

As always, I've given them what I hope are appropriate names.  This is slightly complicated by the fact that there weren't anything like this many harpies in the original Greek myths.  However, once you add in variations of the tales by different authors (and later retelling by the Romans and others), it is possible to come up with a reasonable variety of names.

Once again, these were very simple models to paint, as the bulk of each figure is just a pale violet undercoat with a dark wash.  I'm still not totally convinced that the purple colour is good, but at least they cannot possibly be mistaken for humans.  It should make it much simpler to tell friend and enemy during a game!
Posted by Colgar6 at 08:03